Is whiskey gluten-free? It depends. Read on for more! I’ve also included a list of gluten-free whiskey brands.

Whiskey is a popular alcoholic drink beloved by many people around the world. Like any other alcoholic drink, there are numerous whiskey types, including scotch and bourbon. However, all of these types are made from grains – be it wheat, rye, barley, sorghum, or even corn.

The simple answer to this question is – yes – usually. It’s generally assumed that the process of manufacturing whiskey gets rid of any gluten that could be present in the grains.

Normally, whiskey is made by heating and evaporating all the alcohol from fermented grains. Later, the vapor is condensed and changed into liquid alcohol.

In light of this, it is assumed that all of the gluten is left behind with the grain residues and not in the liquid alcohol.

Unfortunately, it’s not all black and white. It’s hard to tell whether this manufacturing process gets rid of all the gluten in the alcohol, as there’s no guarantee that 100% of the gluten has been removed from the whiskey.

This is because there is still a considerable chance that the condensed alcohol still comes into contact with some gluten particles.

Most brands of whiskey are safe for people who are gluten-intolerant and people with celiac disease, thanks to the distillation process. But you still need to check labels for flavorings and additives added after distillation.

Cross-contamination is also a risk if the whiskey has been produced in a facility where gluten-containing products are made.

Most people with celiac disease don’t react to alcohol distilled from grains, but some do. You should consider buying whiskey made with gluten-free grains if that’s you.

That way, there’s no worry about whether or not all the gluten was removed during the distillation process.

Why aren’t they all labeled as gluten-free?

In many countries, including the US, products that are made from gluten grains are not allowed to be labeled as gluten-free, even if the gluten is removed during distillation.

So that means that any product that is made from a gluten grain can’t be labeled as gluten-free.

Whiskey made from gluten-free ingredients, like the ones below, that are free of any gluten-containing additives can be labeled as gluten-free, as long as they meet the above requirements. 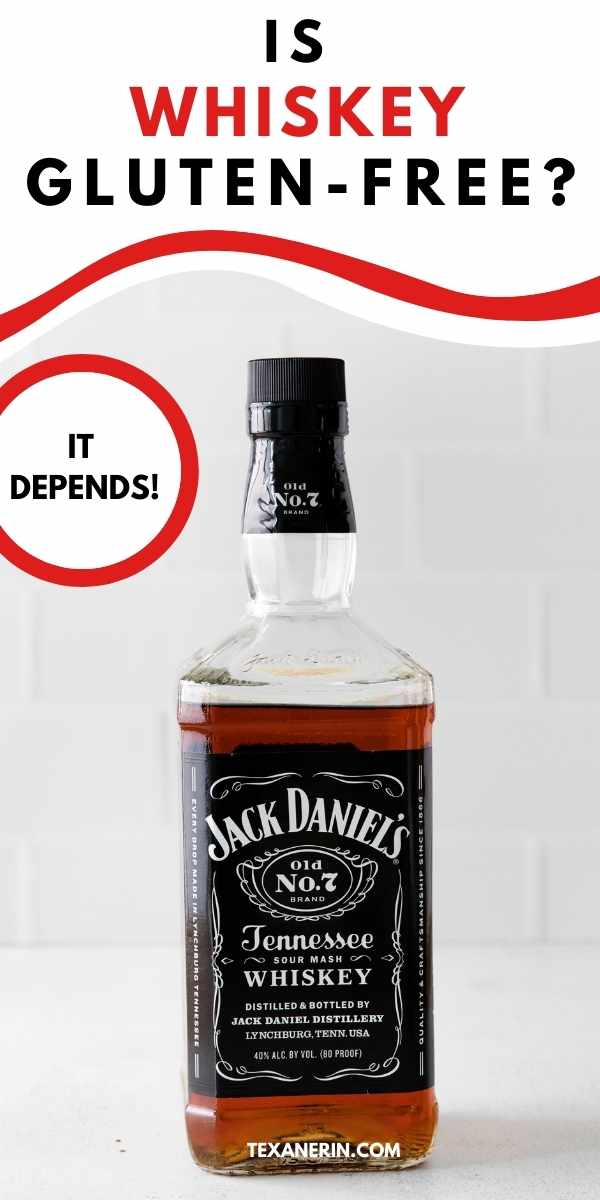 Whiskeys made with gluten-free grains

It’s unclear whether the whiskey manufacturing process can be relied upon to eliminate every ounce of gluten. However, all is not lost. If you want to be 100% sure that the drink in your glass is gluten-free, only choose whiskey manufactured from sorghum or other non-gluten grains.

Sorghum, unlike other grains like wheat or barley, contains no gluten at all. Therefore, when whiskey is manufactured from this grain, there is no risk of gluten (unless there’s a cross-contamination issue).

Some people might argue that these aren’t really whiskey at all, considering that they’re not derived from wheat, barley, or rye. But they are the best choices for people who react to regular whiskey!

This information is accurate at the time of writing in May 2022, but things can always change! Check your labels.

This is a high-quality whiskey manufactured entirely from sorghum grown in the United States. It is named after a legendary entrepreneur and politician who wrote the authoritative book on the production and distillation of sorghum.

If you are allergic to gluten, but still want to enjoy a glass of whiskey, this is perfect for you. Even as you drink it, you are sure that you will not have to worry about an allergy rush later. It is available in multiple stores and online shops.

This whiskey is also made from pure sorghum to perfectly suit anyone who wants to maintain a gluten-free diet. What’s more, the manufacturer of this whiskey does not deal with any grains that have gluten. This means that you are assured that whatever you’re drinking has nothing to do with that unwanted ingredient.

If you’re looking for a classy brand of alcohol that is gluten-free, try this one. It is also popular for being smooth and hangover-free. As such, you can confidently party all night and still wake up early for work with neither a hangover nor an allergic reaction.

This one is made entirely from Wisconsin sorghum and is produced in a facility that doesn’t use wheat, barley or rye. It’s less sour than bourbon and less harsh than rye.

You might have heard of this whiskey because it has won awards for being one of the most loved drinks. As much as it is made from pure sorghum, its manufacturer still produces drinks with gluten grains. However, S.S insists that they are a hundred percent careful to make sure that no gluten finds its way into this drink.

Keep in mind that some distilleries may also produce other alcohols made from gluten-containing ingredients. If you’re concerned about cross-contamination, it’s always a good idea to reach out to the distillery directly.

Maintaining a gluten-free lifestyle does not only apply to food but to alcoholic drinks, as well. Therefore, if you’ve just been diagnosed as gluten intolerant, you have to scrutinize the ingredients of every drink you take. Read your labels and choose a labeled gluten-free whisky!

I hope I’ve answered your question on whether it is gluten-free or not! If you have any other questions, feel free to leave them below and I’ll be happy to answer. :)