This sweet homemade apple cider is lightly sweetened with maple syrup and is made totally from scratch – no apple juice here! Naturally gluten-free, vegan and dairy-free.

Mr. T has been on an apple buying spree for the past two months. All of a sudden, he’s interested in trying every variety of apple out there so when they’re on sale, he comes home with a few pounds (which is how they’re sold). Now I have about 20 pounds of apples and can’t get rid of them quickly enough! This homemade apple cider could alternatively be called “What To Make When You Have Too Many Apples.” I wouldn’t use fancy or expensive apples in this cider just because it seems like such a waste – any old apples will do! 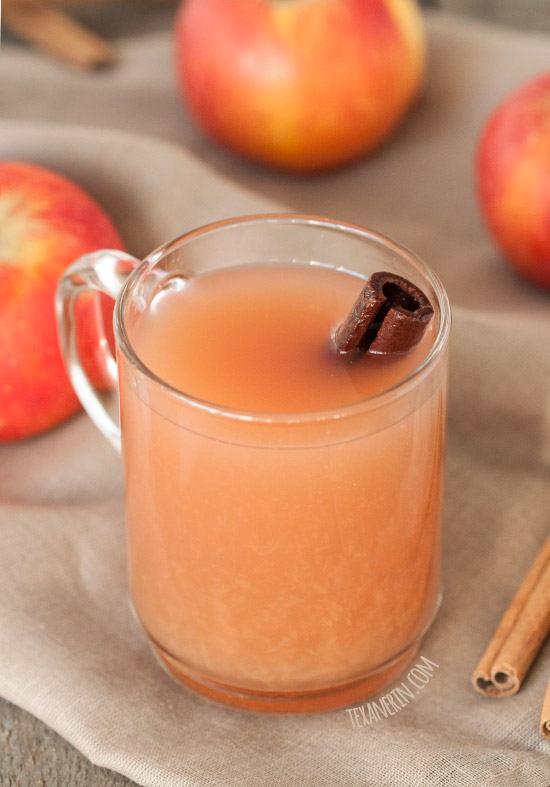 I’ve made this apple cider twice so far and both times I used 3 pounds of apples. Here’s how the batches differed:

They tasted exactly the same, so if you have old apples, use them! Just make sure that they’re still good and flavorful. If you use apples that taste like nothing (looking at you, Red Delicious!) then your apple cider will also taste like nothing. Or actually, it’ll taste like cinnamon maple syrup water, which doesn’t sound that bad, but it’s not what we’re going for here. 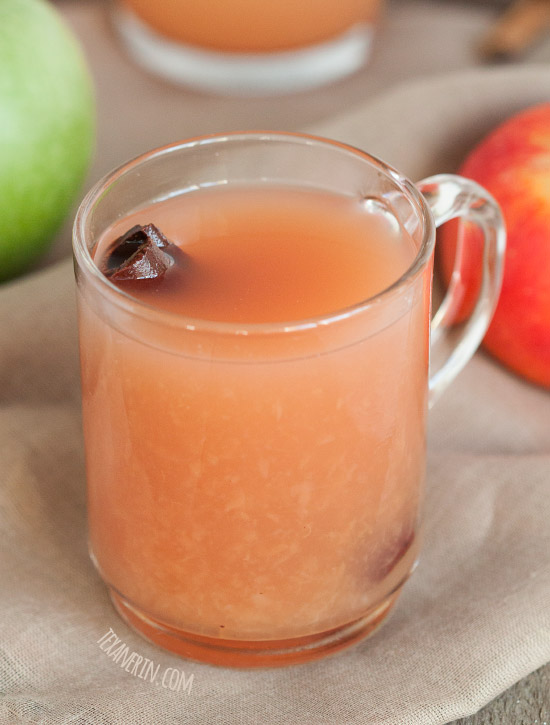 I made it a second time because my yield seemed so much smaller than what I’d seen online. Some recipes were claiming a yield of 1 gallon from only 10 apples. A gallon! I did use small apples but I still don’t see how that’s possible. This is another case for adding weights to recipes. ;) American apples must be much larger than I remember.

I sweetened my apple cider with just 3 tablespoons of maple syrup and it was perfect for us. That’s much, much less sweetener than other recipes so you may want more. You can always add more maple syrup, sugar or whatever sweetener you want to use later on, but you can’t remove it, so I recommend using 3 tablespoons and adding more to taste when it’s finished.

I originally made this as a trial run for Thanksgiving and while it’s really tasty, I don’t know if it’s practical for large Thanksgiving dinners. For a family of four – sure! But for 20? You’d almost need half an orchard. ;) We’ll be going to a friend for Thanksgiving this year (where I’ll be the only American!) and we’ll be about 6 people. I’m definitely going to double this recipe, bring it and represent. :D