This almond paste recipe only calls for four ingredients, is much cheaper than store-bought and just takes minutes to make! Can be made with almond flour in a bowl or with blanched almonds in a food processor.

Another benefit of homemade almond paste is that it doesn’t have any questionable ingredients in it. And yes, it works exactly the same as store-bought! I’ve tested it in a few different recipes so far with excellent results.

I’ll actually be posting two of those recipes – Italian pignoli cookies and German almond horn cookies – next week, just in time for Christmas. If you need some almond cookies right now, check out my Italian almond cookies that use almond flour instead of almond paste. 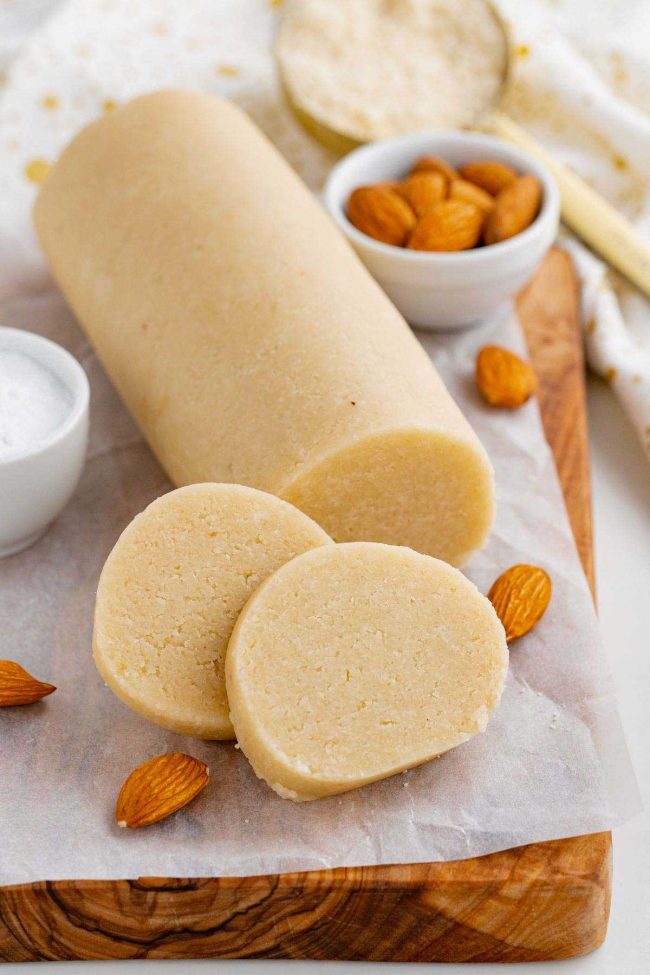 Make sure to use the right ingredients

The nice thing about this recipe is that you don’t need a food processor. At least if you use almond flour.

You can just use your hands to combine it all in a big bowl. If you prefer to use blanched almonds in place of almond flour, then you of course need a food processor.

I find that a high-speed blender processes nuts too unevenly. It’s great for making things like almond butter that will be eventually liquid, but not almond paste. You can, however, use it to mix up the almond paste if you’re using almond flour.

If you live outside of the US and Canada – when I say almond flour, I mean the product that is probably referred to as ground almonds in your country. 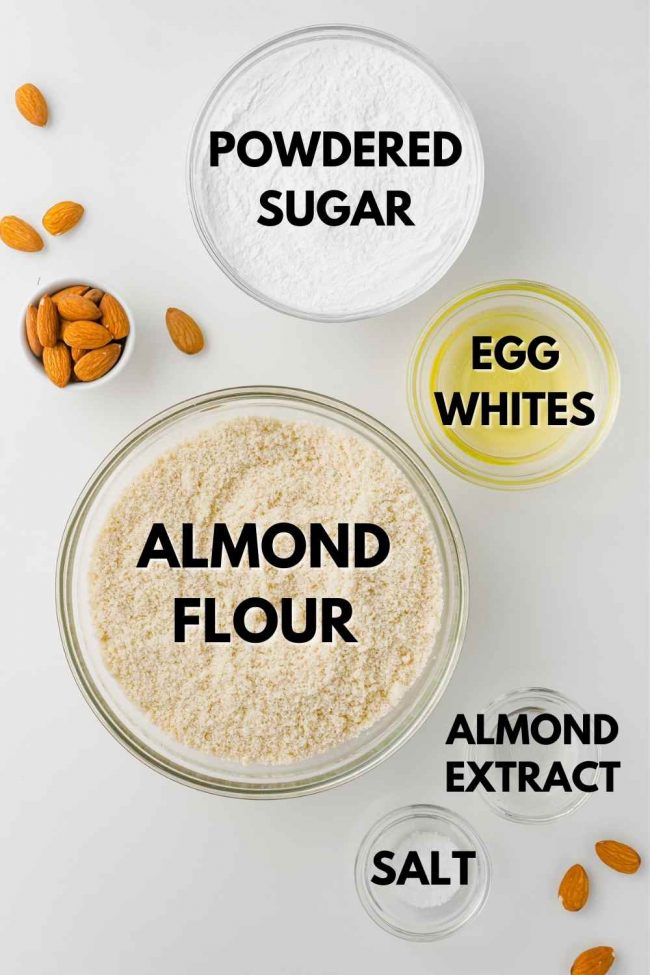 In Germany, there’s something called Mandelmehl, which translates to almond flour, but it’s actually deoiled almond flour. Something we don’t even have in the US. The two products are not interchangeable!

I believe that this is also true in the UK. If you’re looking at a US recipe that calls for almond flour, you need to use ground almonds.

I do not recommend almond meal, which is made from unblanched almonds. You don’t want those little specks of skin and it’s not as fine as almond meal.

The below is a preview of the cookies I made with this almond paste! 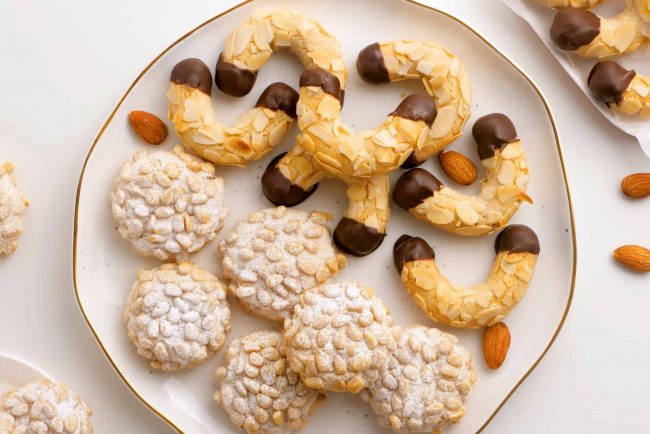 What’s the difference between almond paste and marzipan?

According to Nigella Lawson, in the UK, the terms almond paste and marzipan are used interchangeably. But both are what we’d call marzipan in the US.

Marzipan is used for covering cakes, making little edible models and it has a higher proportion of sugar, which makes it smoother and easier to roll than almond paste.

Almond paste is used as an ingredient in baking. In cakes, cookies, and some types of bread, like the German stollen. You don’t eat it on its own like you can with marzipan.

But wait. In Germany, the almond paste / marzipan product meant for baking is called Marzipanrohmasse (‘marzipan raw mass’). And it’s also used in baked recipes and to make little deocrations and to cover cakes.

So it’s confusing. If you’re in the US, make sure to buy or make marzipan if a recipe calls for marzipan and almond paste if it calls for almond paste. 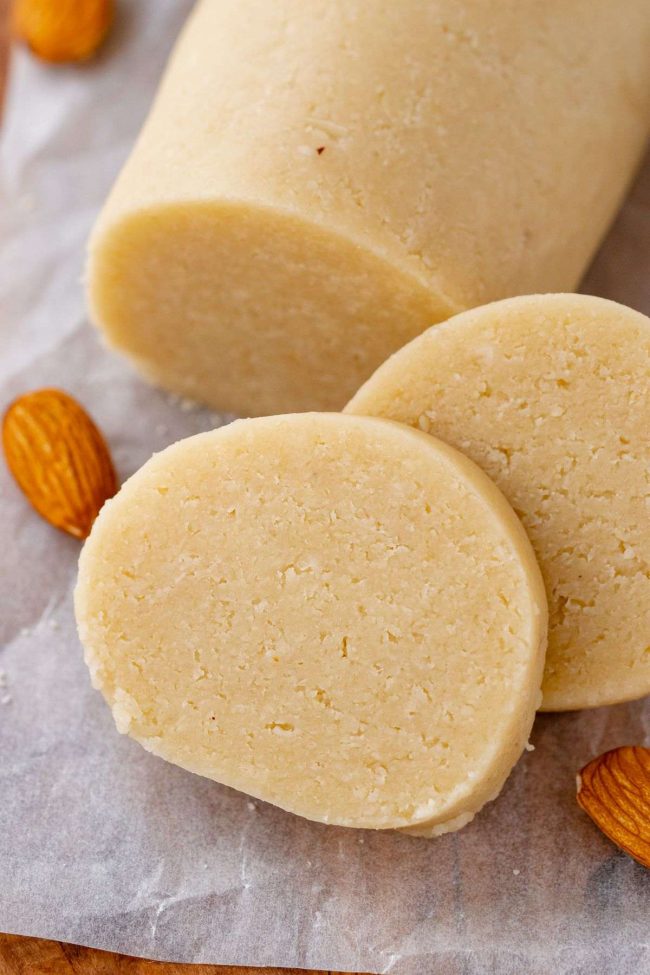 If you’re outside of the US, do a bit of research about where the recipe comes from and whether you really need almond paste or marzipan. They’re not really interchangeable.

And while I’m at it, if you bake with regular wheat flour, you should really stick to recipes from your own country. US all-purpose flour is not the same as German flour, UK flour, or anywhere else. They’re all slightly different.

Ground almonds are generally the same from country to country. So is coconut flour. Whole wheat flour and other whole grain flours seem to work the same. But white flour… nope.

This is actually the original reason why I started posting the kinds of recipes I post. Because I couldn’t get any US recipes to work with German flour! 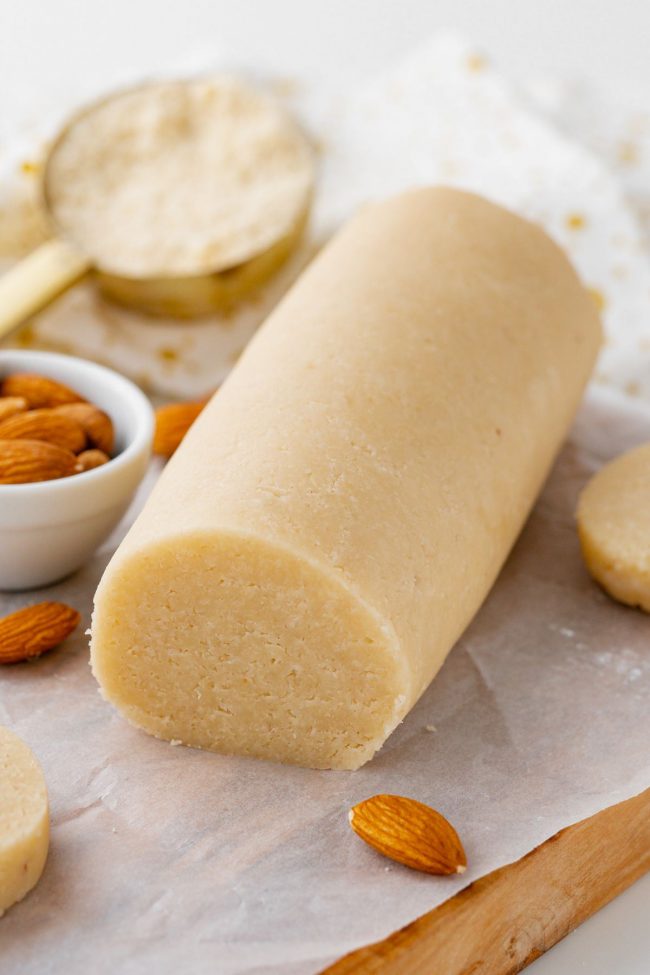 There’s clearly a big difference in how people measure almond flour. So the safest thing to do is to use a scale. With a scale, there’s zero variation and your almond paste is sure to come out perfectly.

Also, if you use something other than a large egg white, you need to measure out 32 grams of egg white. If you don’t, your almond paste (and again, whatever you make with it), won’t have the right consistency. 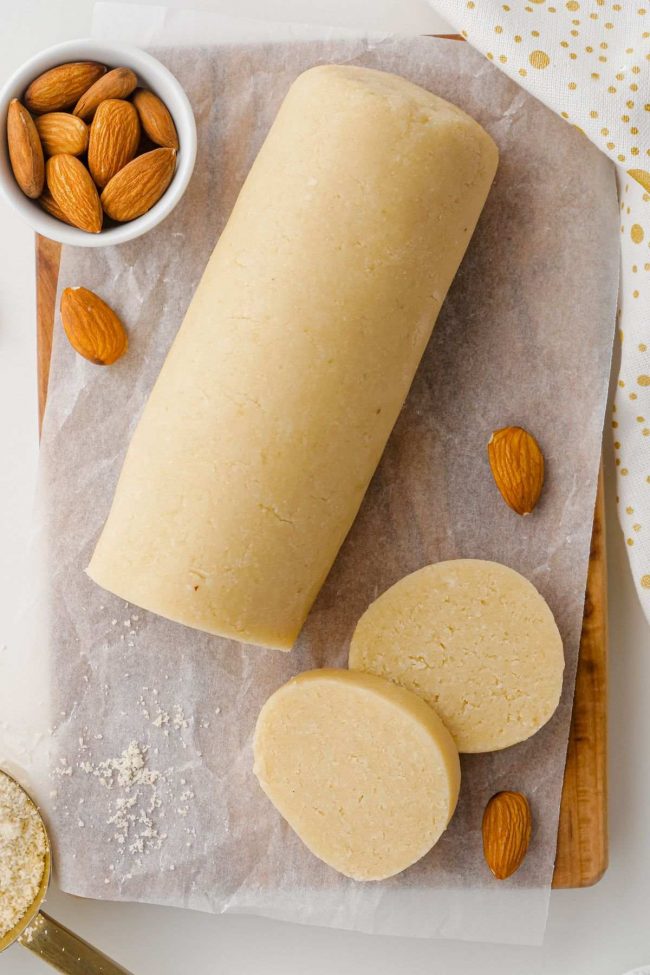 I tried to make a paleo version of this almond paste recipe using coconut sugar and the almond paste appeared to be the right texture. But when I used it in a recipe (that I had already tried with success using the non-paleo homemade almond paste), the dough was super runny. I had to add a ton of extra almond flour to the cookie recipe.

That means I don’t really want to recommend using coconut sugar in this almond paste recipe because you’ll need to adjust whatever recipe it is that you use the almond paste in.

Sub for the egg?

Not this time, sorry. And it’s the same problem as with the coconut sugar version.

Even if I came up with a vegan version that worked in one recipe, it doesn’t mean that it’d work in other recipes.

It’s safest to just google a totally homemade version of whatever it is that you want to make with almond paste. So google “vegan almond paste cookies” or “vegan pignoli cookies” or whatever. 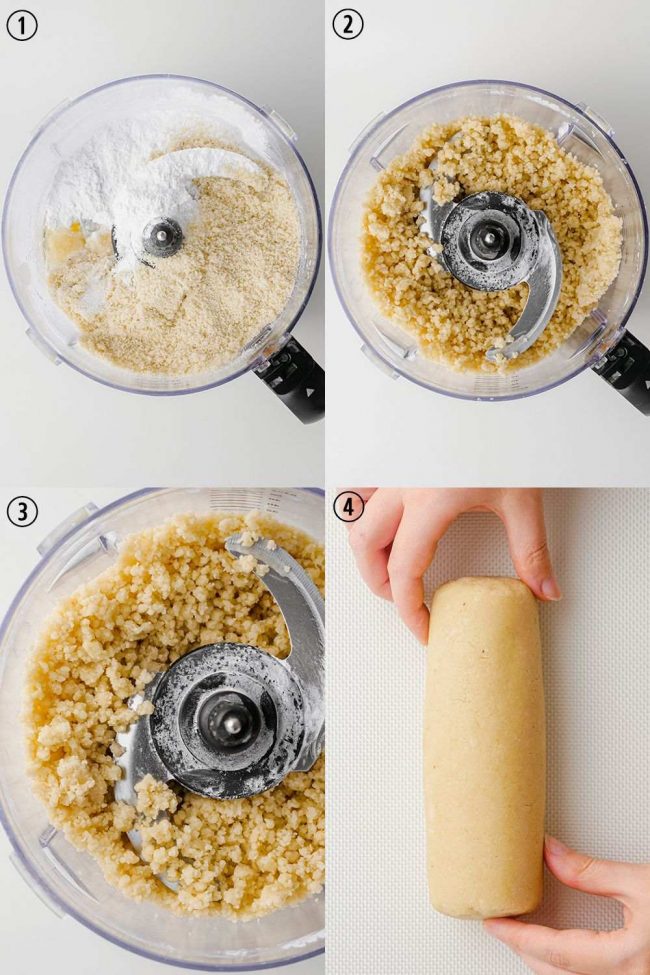 How long does it last?

Store-bought almond paste has preservatives in it. My recipe does not. I saw one big food site saying that you can store homemade almond paste for 3 months in the fridge.

Raw eggs for three months in the fridge? Even if they’re pasteurized eggs, I’m going to say… nope. I don’t think so.

I wouldn’t recommend keeping it in the fridge for more than 3-4 weeks. Or just freeze what you don’t need! It freezes great and can be frozen for 6 months.

Let me know if you give this recipe a try! I’d love to hear what you think. :) 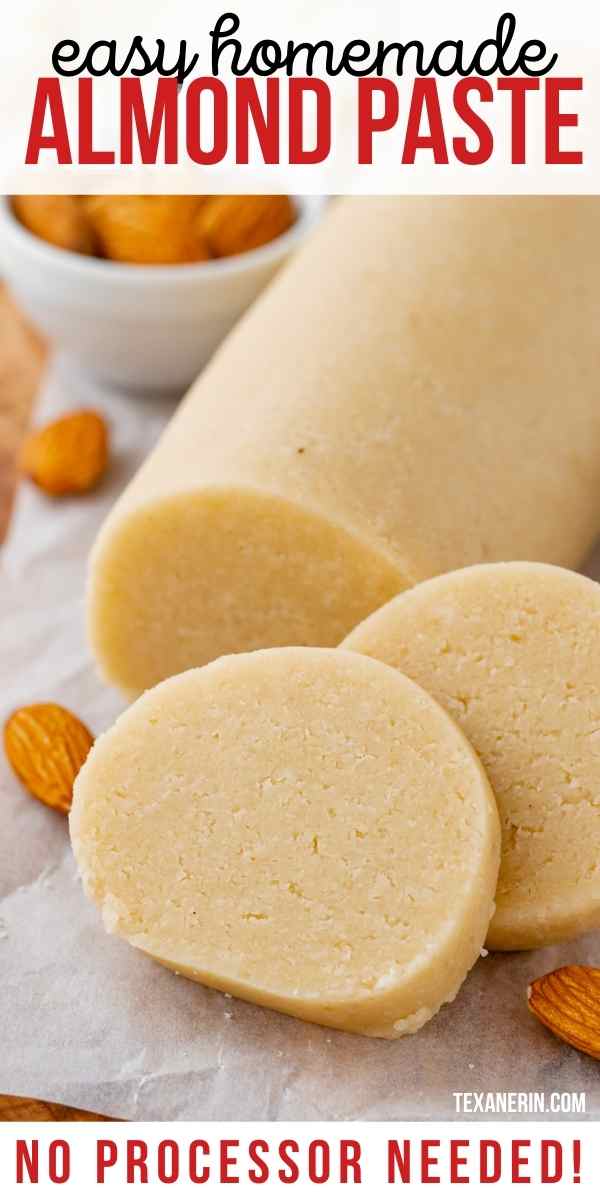