This eggless cheesecake is just like a regular cheesecake, but even creamier, quicker and easier to make! This recipe can be made with a traditional graham cracker crust or a graham cracker-like homemade oat-based crust. Simply use gluten-free oats or graham crackers to make it gluten-free.

This is a weird way to begin a post – this cheesecake is actually way creamier than you see in the photos.

But then I made a change to the recipe after I had the photos and video made. Unfortunately, I don’t have hundreds of dollars sitting around to have everything reshot.

The change? Take the cheesecake out of the oven when it’s done baking, instead of letting it cool in the oven with a door propped open. That’s how I usually cool cheesecakes to ensure that they don’t crack, but it overbakes this egg-free cheesecake.

Not baking it longer results in a creamier texture! And there weren’t any cracks. If you follow the directions and remove it from the oven after baking, it’s kind of like a cream cheese tart filling, but firmer.

This is the overbaked cheesecake (with the homemade crust): 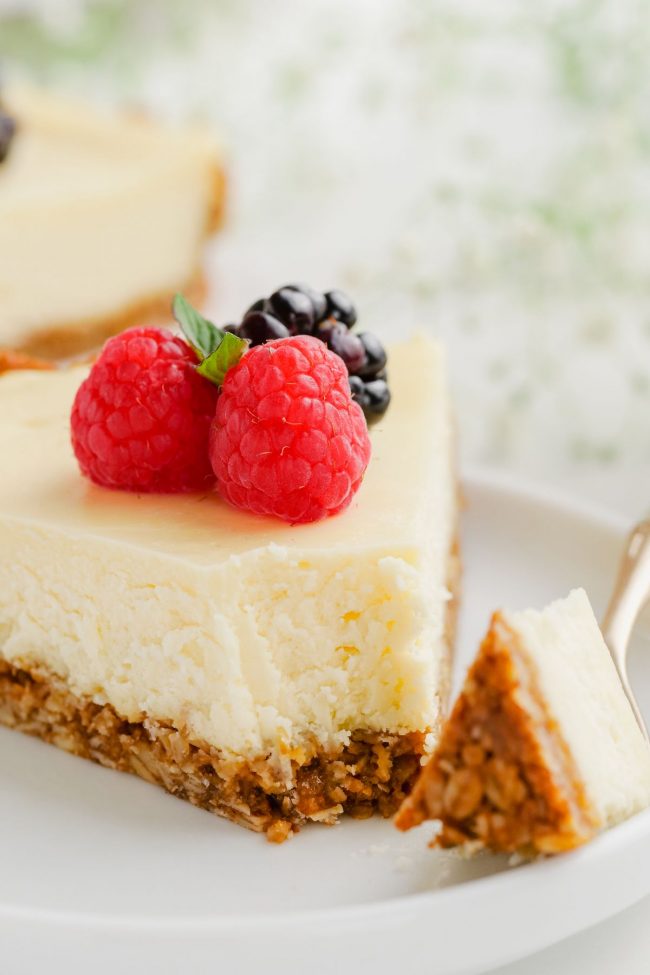 Versus a picture my parents took last night (with store-bought graham cracker crust):

See! Much creamier. I should say that the videographer and her team loved the “overbaked” (or really, just New York style) cheesecake but I prefer the creamier-style version.

My husband isn’t a huge sweets lover but declared this cheesecake a masterpiece. Now, I don’t know about that, but I did love it. And I’ve been thinking about it a lot since I last made it!

The crust is reminiscent of a graham cracker crust, but also sort of like an oatmeal cookie. It sounds weird, but it’s delicious.

The reason I don’t post many pie recipes is because of the crust. They’re so cumbersome.

But this crust comes out of the pan perfectly. So many crusts stick to the pan or are soggy, but this one was perfect.

Some of my regular readers know that I only like cookie-like pie crusts, and this one qualifies. I’m excited to start posting more pie recipes with this crust! 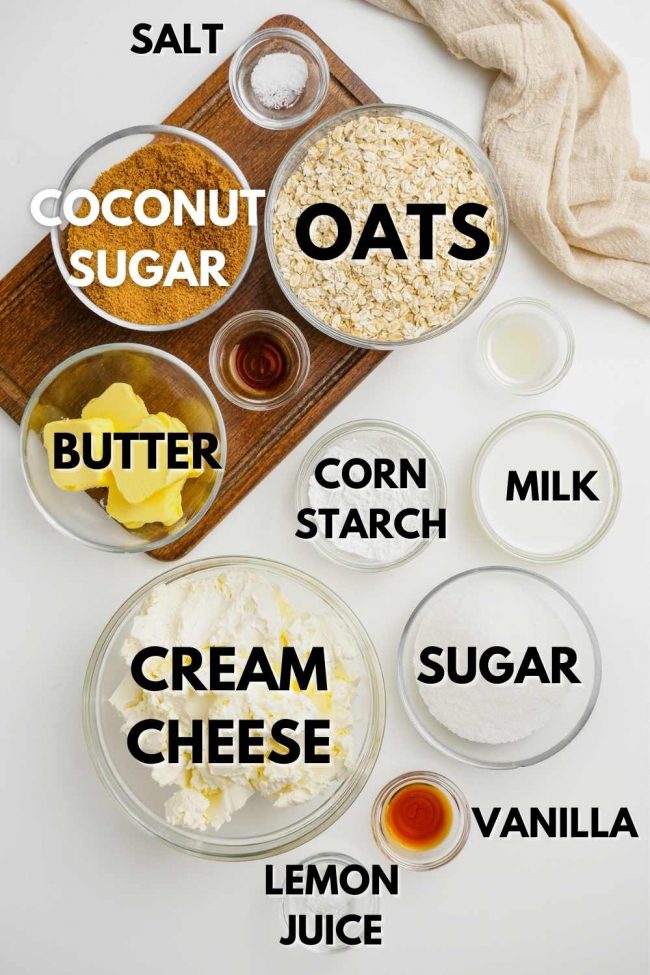 I’ve been mentioning this a lot lately, but ingredients aren’t the same all around the world. Butter and cream cheese are among the biggest issues.

So I had my parents, who live in the US, test this recipe. The homemade crust worked great with US butter. Or, actually, even better.

The crust didn’t shrink a bit and didn’t have to be pushed back up with a spoon to bake a little more, the way mine did with German butter.

I also had them try a store-bought graham cracker crust. They said that the filling was just the perfect amount for the crust.

You can also use a homemade graham cracker crust. If you do that, you’ll need to pre-bake it and cool it completely, unlike the oat crust recipe. The oat crust only needs to partially cool. 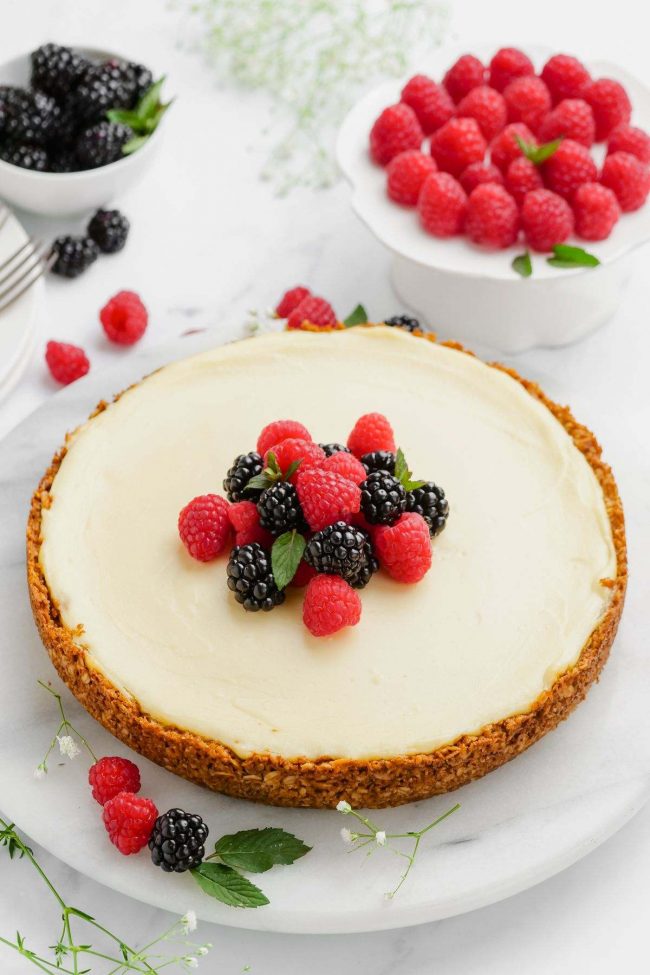 Store-bought gluten-free graham cracker crusts also seem to exist, but I’ve never tried any. Sorry that I don’t have a recommendation there! 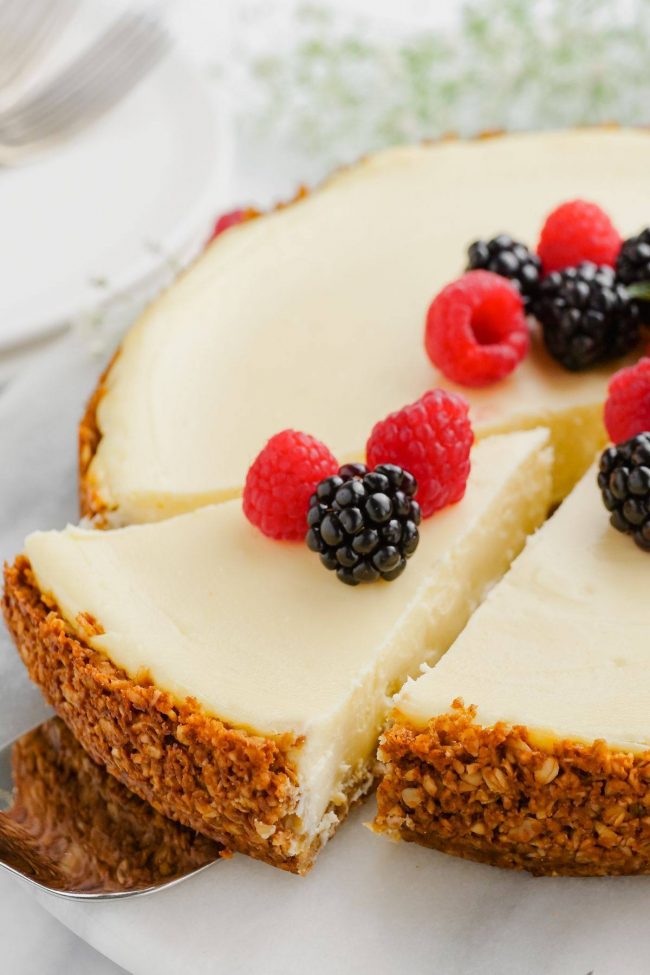 Like most cheesecake filling recipes, this filling is pretty quick and easy to make. Because it’s egg-free, there’s less of a chance of overbeating.

But you still don’t need to overbeat. There’s no reason to, and it might make cracks more likely.

As I mentioned, cream cheese is very different outside of the US. My parents didn’t have any issues with the filling!

If you live outside of the US or Canada and have the type of cream cheese in little tubs, meant to be spread on toast, this is what you need to do: 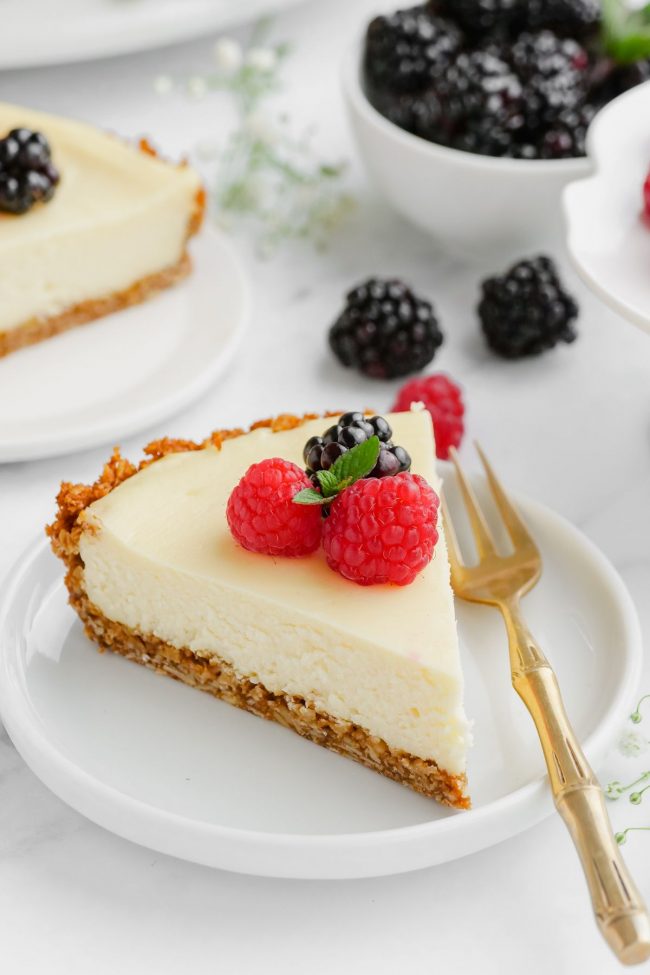 I’m lazy and went with berries. Or maybe I should market myself better, and say that I went with a classic look. ;)

Other delicious toppings would be:

Raspberries or strawberries and mint leaves would look festive for Christmas. 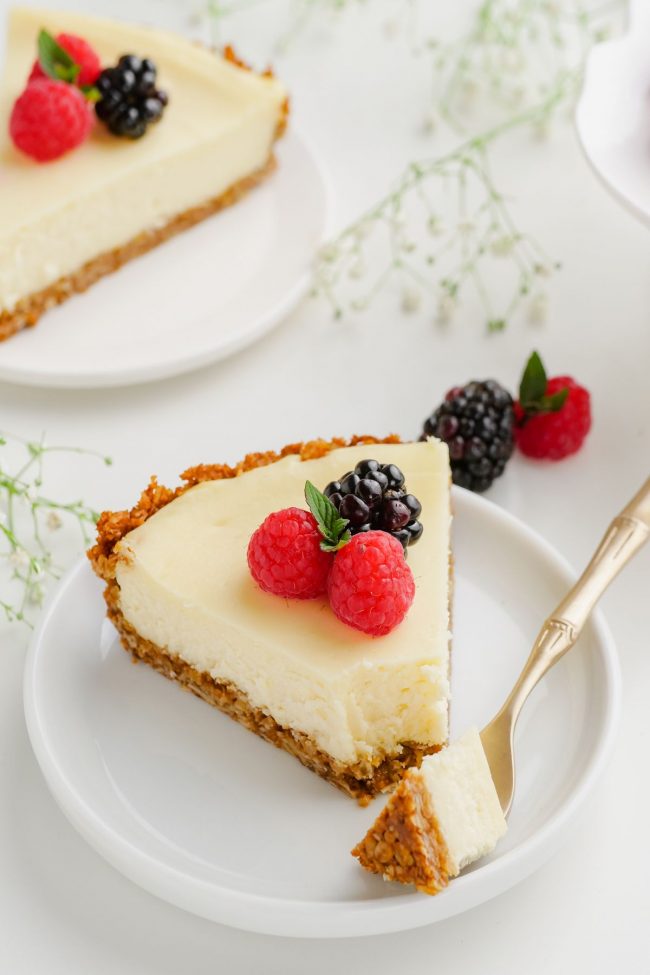 If you’re celebrating with just one other person or even just by yourself, I’m sure you won’t have any issues finishing off this cheesecake.

It doesn’t make a huge cheesecake, as some cheesecake recipes do. It’s quite easy to polish this off with a partner in no time. I’m not advocating that, just saying that it’s easy to do. ;)

If you’re not a piggy, you can also slice the pieces and freeze them for up to a few months. They freeze great. 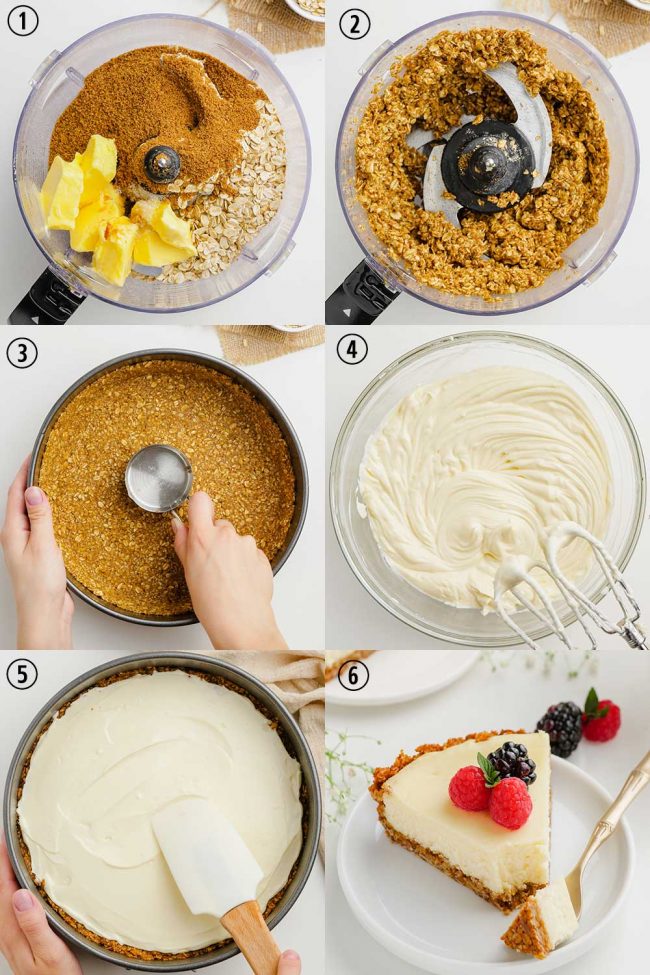 Substitution questions about this eggless cheesecake?

The apartment is decorated, and the presents are bought, but that’s the extent of my Christmas prep. So happy (and very safe!) holidays to everyone, and may we all enjoy a better 2021. :) I’ll be back in January!

A store-bought or homemade graham cracker crust can also be used!

For the homemade crust:

If using a store-bought / homemade crust:

To bake the cheesecake: