This vegan caramel pecan cheesecake is also paleo, no-bake and truly rich, creamy and decadent. Nobody will miss the dairy in this recipe! It freezes great and can be made well ahead of time, making it perfect for Thanksgiving and Christmas.

If you want something that will impress your non-vegan, non-paleo and non-healthy eating friends and family during the holidays, this is it.

This is most definitely one of my very favorite desserts. Of all time. And I don’t even really like pecans – at least not on their own.

But once you roast pecans and cover them in caramel or sugar, they become irresistible. 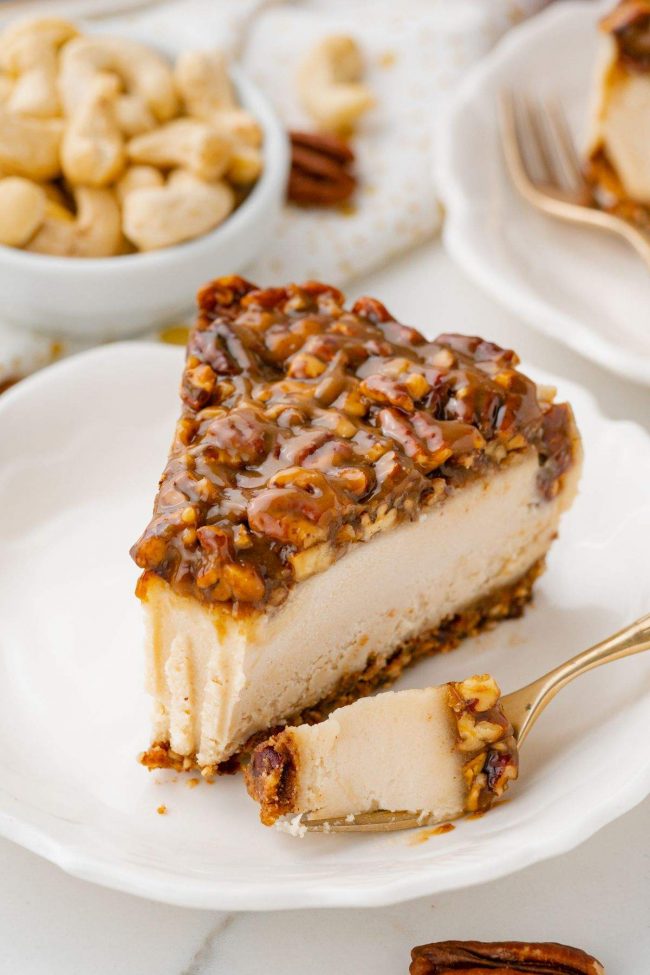 Here are some of my other favorite pecan recipes:

All of which are also paleo + vegan!

Today’s recipe is my favorite vegan cheesecake, topped off with toasted pecans and vegan caramel sauce. 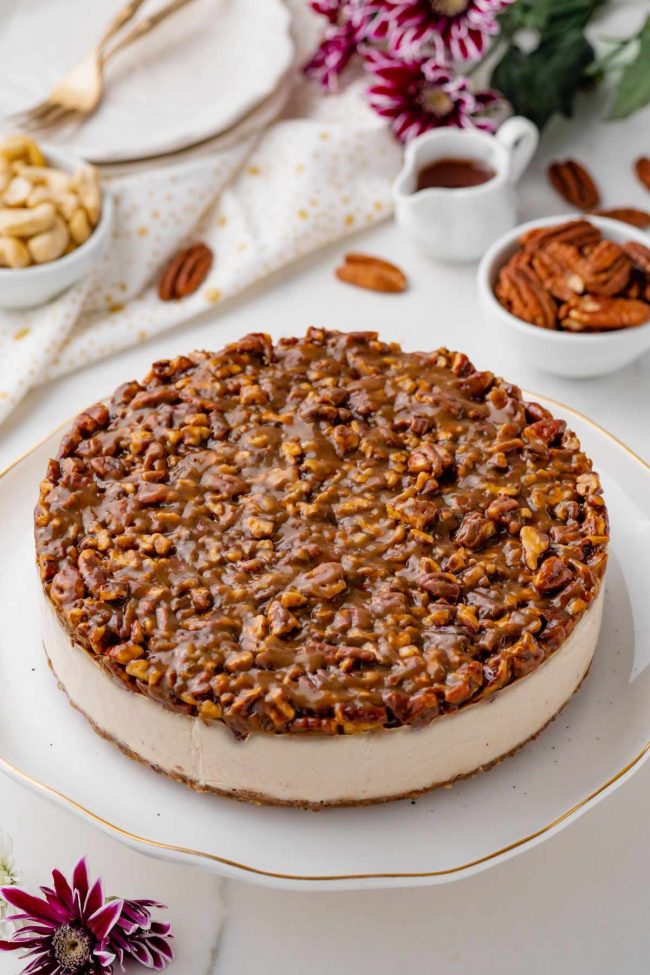 It takes quite a while to make the crust, the filling, and the topping but it’s a cheesecake. Cheesecakes are never super quick to make.

I do have an eggless cheesecake recipe coming soon that’ll be quicker to prepare. It’s full of dairy, though.

I find paleo or vegan cheesecakes to be more time-intensive, but so worth it! Especially this vegan pumpkin cheesecake. That is one show-stopping dessert! 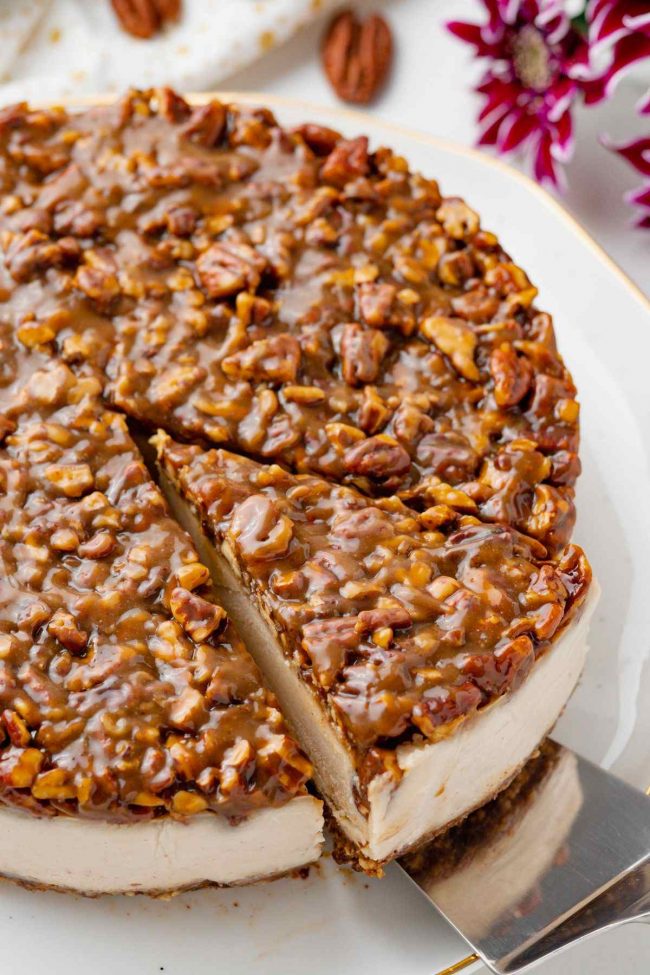 The yield is quite large, just like a regular cheesecake. If you don’t have a large household, you can easily cut this cheesecake into pieces, freeze them and take a piece out when you’re in need of something sweet.

The slices in the photos are way too big to serve after Thanksgiving or Christmas dinner. This cheesecake is super-rich, dense and creamy and most people will likely just want a small piece.

I say most people because I leave a lot of room for dessert. I don’t care about green beans or other veggies – gimme some red-skinned mashed potatoes, gluten-free cornbread and I’m moving on to dessert! 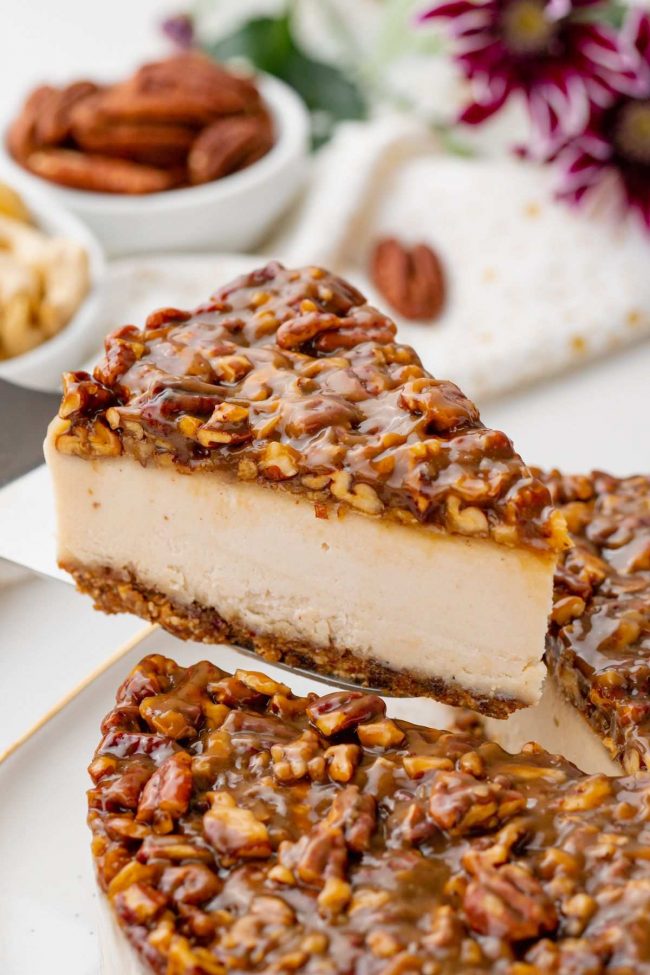 I haven’t tried it but I think any type of nut would work. As long as they’re chopped a bit.

If you put whole nuts of any kind on there, the cheesecake is going to be too difficult to cut neatly.

An exception might be pine nuts but that’d be one expensive (or more expensive) cheesecake to make. 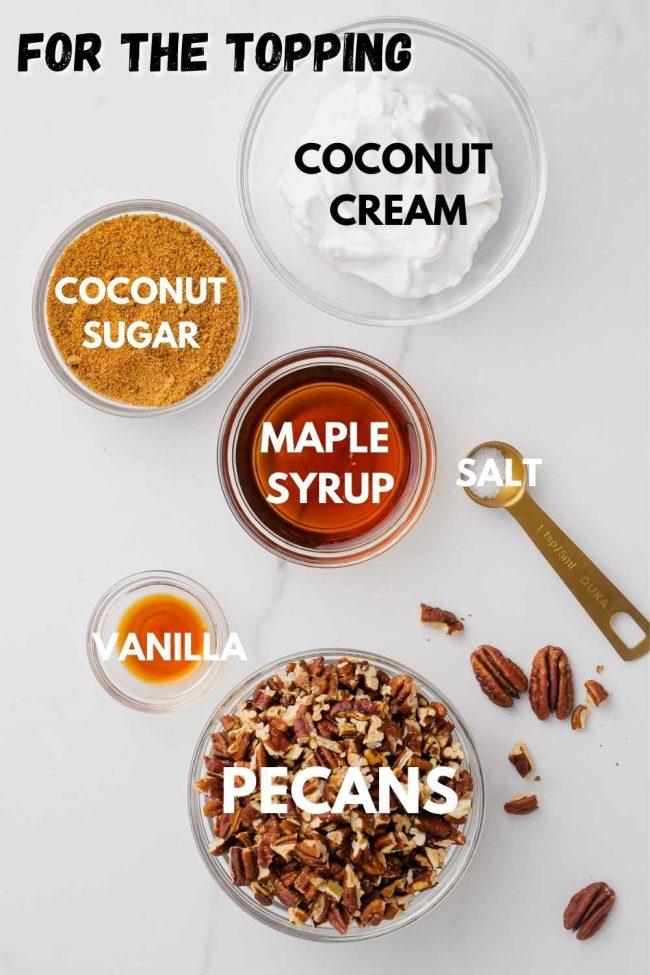 This is a no-bake cheesecake and you can make the crust and the topping with raw nuts.

But if you toast the pecans, I think it tastes WAY better. I actually didn’t even like the crust with raw pecans.

Roasting improves both the flavor and texture of the nuts. 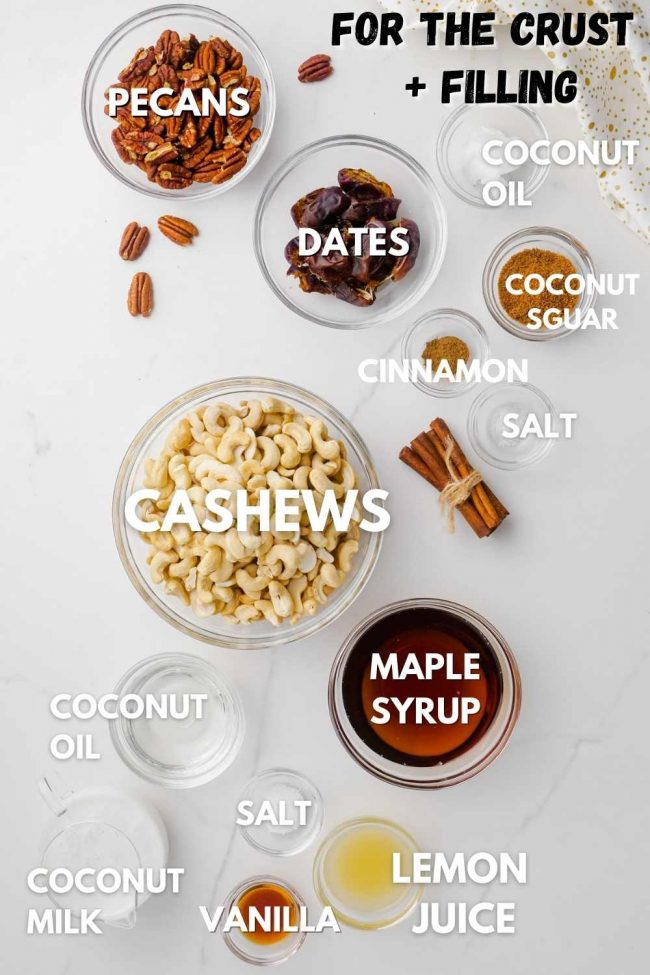 This cheesecake freezes great. You could make this now and freeze it until Thanksgiving or Christmas morning.

I first made this last Thanksgiving. It was just for my husband and me.

It was so delicious that we couldn’t be stopped and so I cut it into pieces, wrapped each in plastic wrap and hid them all around our freezer. I was still coming across pieces the next year and even months later, they were fantastic.

If you give this cheesecake a try, I’d love to hear what you think! 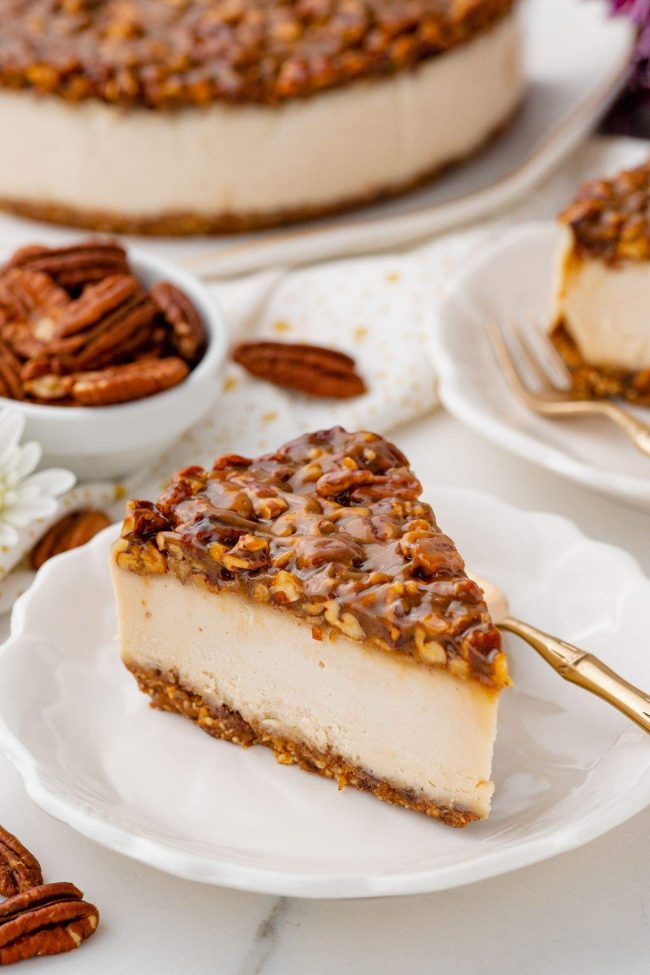 Questions about this recipe? 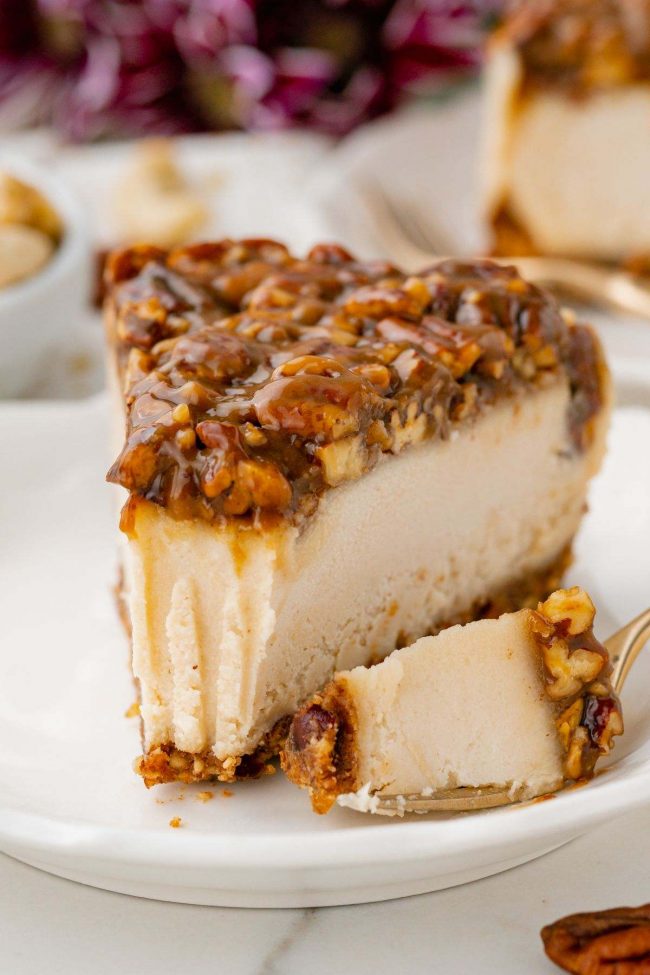 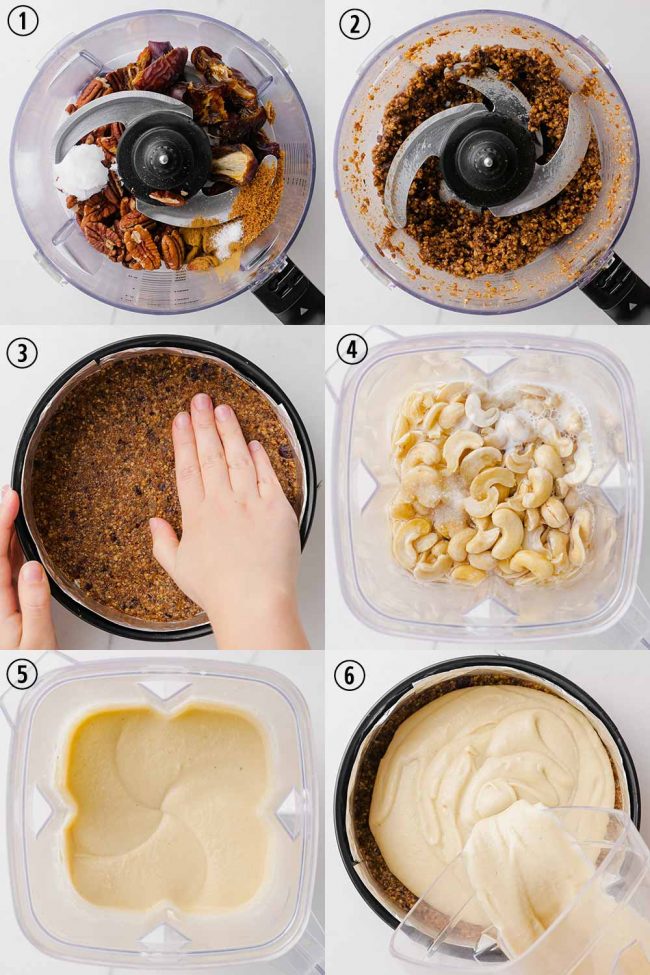 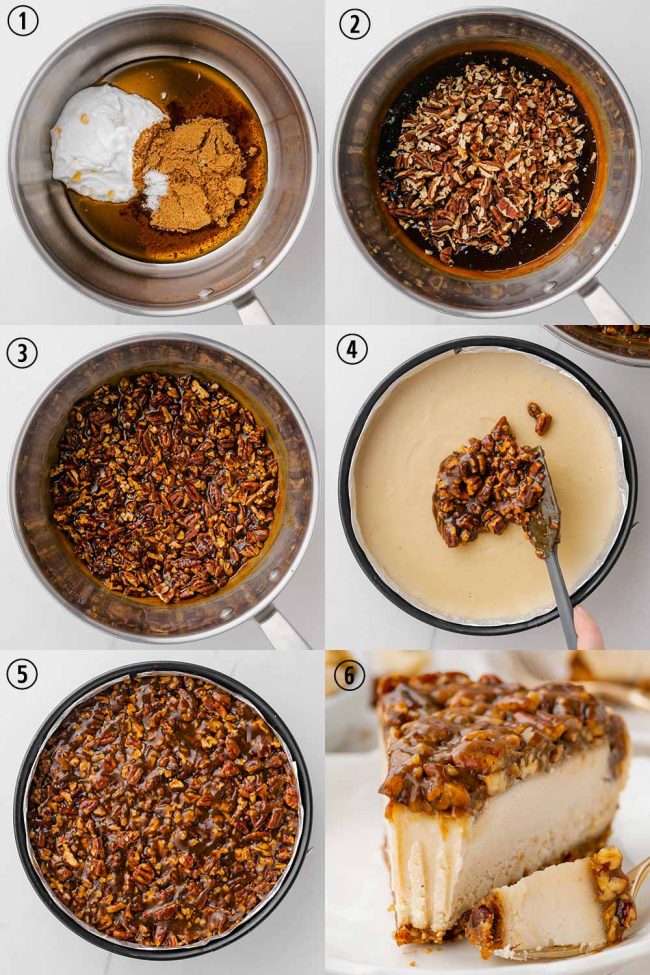 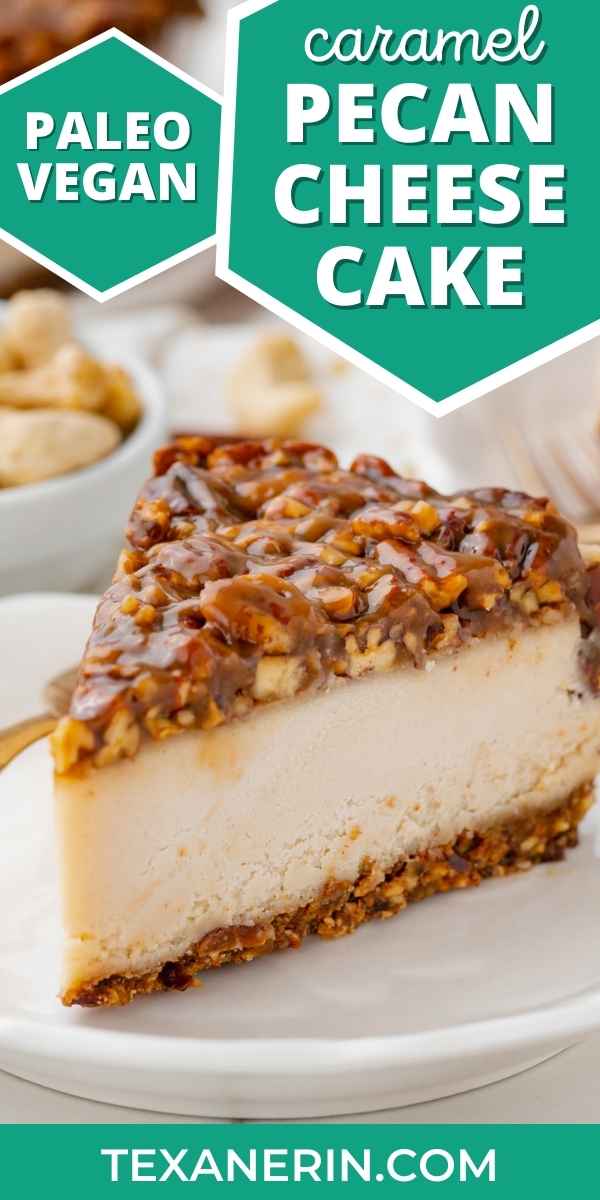