Is vanilla extract vegan? Almost always, yes! But it’s a good idea to still check the bottle before buying. Read on for more!

Vanilla extract is a must-have in the kitchen. It’s a pantry staple that everyone should have because it has a simple delicate flavor that makes all the difference in a variety of yummy treats. From sweets to drinks, cakes, and more, if you’ve got to have one flavor only, make it vanilla. It never disappoints.

Here are a couple of my favorite vegan treats with vanilla

How can you know if the vanilla extract you’re consuming is 100 percent vegan? Let’s take a closer look.

How is vanilla extract made?

Basically, you’ve got the real stuff and then fake stuff.

Natural vanilla flavor comes from vanillin, which is found in vanilla beans. Although there are more than 150 different types of vanilla plants, only three are used commercially.

The extract is made by taking vanilla beans and copping and percolating them in steel containers after being soaked in alcohol and water. From here, they are left to soak for 48 hours after which the extract is filtered and stored.

To be deemed a pure vanilla extract, the vanilla extract must contain at least 13.35 ounces of vanilla beans, according to the Food and Drug Administration (FDA) flavoring law. They also require a minimum alcohol-to-water ratio of 35 percent to 65 percent.

This method produces about 85% of the world’s synthetic vanillin or 18,000 metric tons per year. Note that synthetic vanilla extract has other chemical additions which are less expensive and have a more robust flavor. 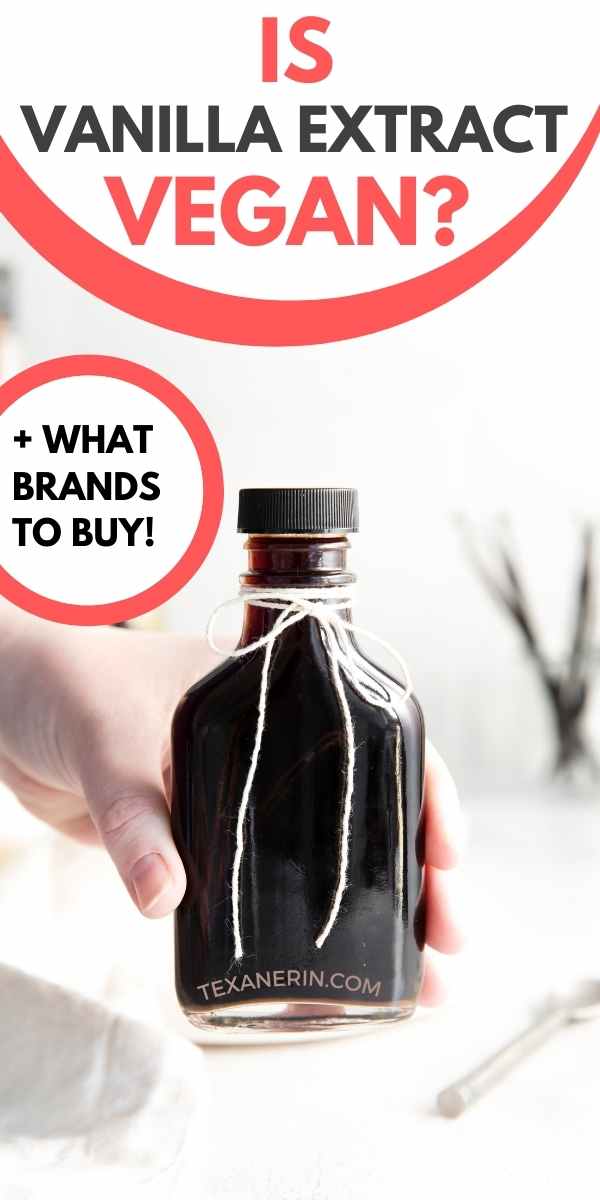 In the past, some vanilla extract was made from the beaver’s castoreum gland found in their anus. This is, however, exceedingly rare nowadays because it’s difficult and expensive to gather.

I couldn’t find any brands that still use this, but if you look hard enough, perhaps you could find some? I sure hope not. 😬

Nevertheless, this was done a long time ago, and the majority of modern products are made from vanilla beans. As a result, double-checking the components before selecting a vanilla extract is a good idea.

I’m really not sure how people started using castoreum in the first place (just how did someone think this was a tasty idea?!), but it’s a yellow substance that comes from a beaver’s castor sacs. This is clearly an animal product and is, therefore, not vegan.

Beavers use castoreum and urine to smell and mark territory. Humans harvest it to use it as perfume and a food additive.

The FDA actually approved castoreum as a food ingredient and around 300 pounds are harvested each year. Comparatively, a whopping 2,600,000 pounds of vanillin are produced.

In other words, vanillin accounts for 99.988 percent of total castoreum and vanillin intake. As a result, it’s safe to say that nearly all vanilla extract is vegan. This is because castoreum is no longer utilized in vanilla extracts since it is too expensive and difficult to obtain.

I’d normally list brands that are labeled as vegan. But for vanilla, I don’t think it’s necessary. I’ve never seen a non-vegan vanilla extract and haven’t found one online, either.

But who knows what weird products someone comes up with. So always check your bottles, and I’d recommend not to buy anything with “artificial flavoring” because one never knows what that could mean.

If you’re also gluten-free, then please check out my post on Is Vanilla Extract Gluten-free? I’ve listed my favorite brands that are labeled and/or certified as gluten-free.

I hope this answers your question! If you have any more, let me know and I’d be happy to help answer them. :)