These vegan no-bake cookies have a great texture, that’s a bit caramel-like, and are super easy to make. I’ve included directions for chocolate chip and cinnamon raisin versions. They’re also gluten-free if you use gluten-free oats.

These no-bake oatmeal cookies are loaded with oats and almond butter, which add a nice nutritional boost. Compared to regular cookies, I think these are relatively healthy. 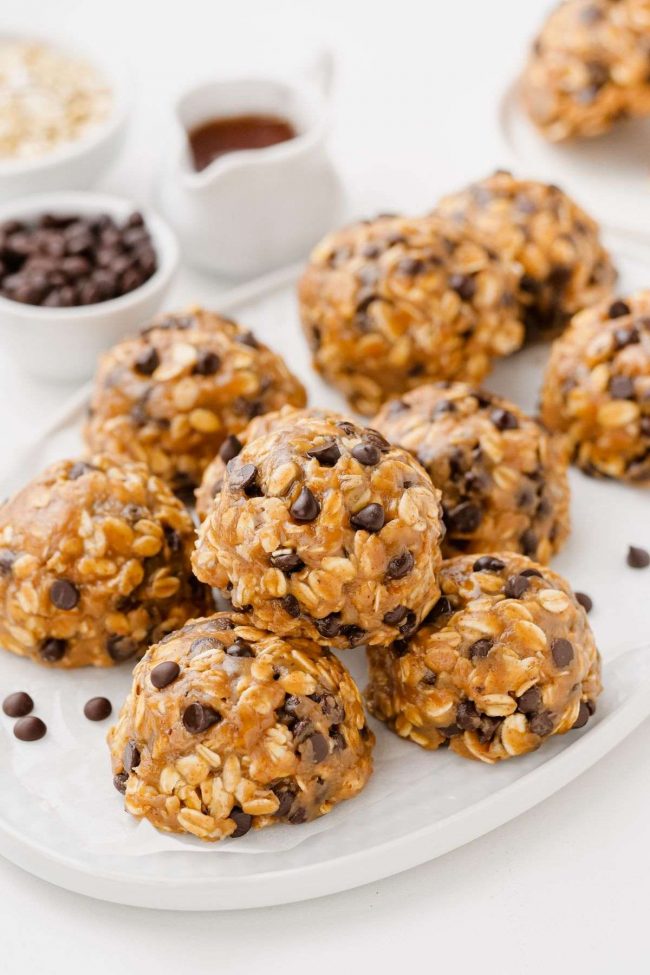 If no-bake cookies aren’t your thing, here are some other great gluten-free cookies recipes you could try out!

Nothing fancy here. Just normal stuff you almost definitely already have in your pantry!


Can I use honey instead of maple syrup?

These no-bake cookies are maple-sweetened, but I’m sure some of you are wondering if you can use honey. Unfortunately, it’s a most definite no.

First of all, it takes a lot longer to boil and the result is some not so very tasty cookies with a totally different texture.

Even after boiling for 10 (instead of 2 minutes), I didn’t get the slightly caramel-like mixture that you see in the picture. And then the cookies tasted overwhelmingly of honey! We didn’t really like those cookies at all, although we love honey. 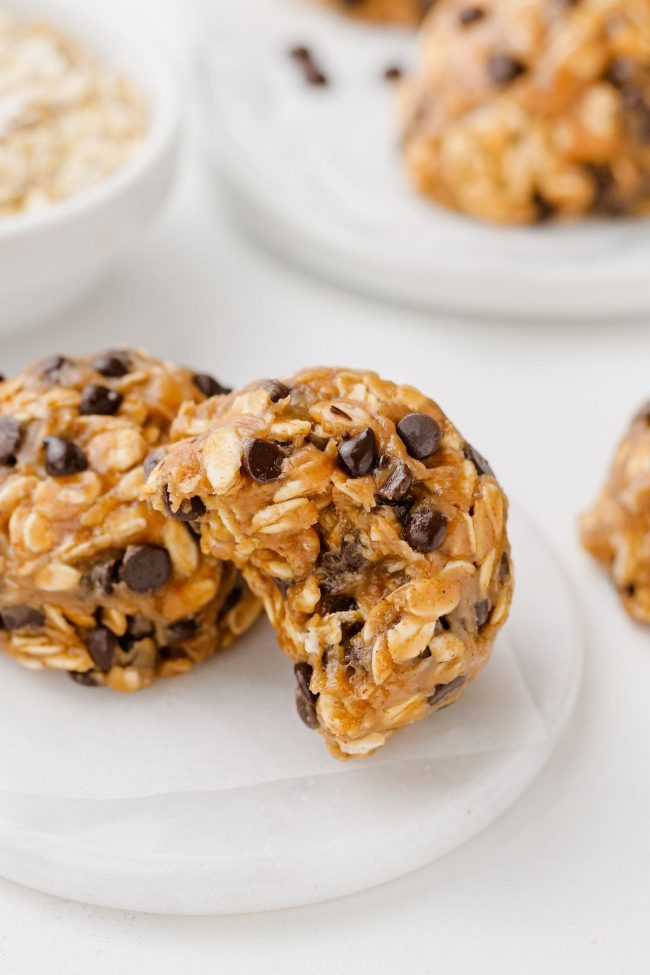 Can I use a different type of nut/seed butter?

You can definitely experiment, but the trick is boiling the mixture just long enough so that it thickens properly. If you don’t, the cookies won’t set up properly.

That’s because the mixture won’t become caramel-like, and it’ll just be too wet.

I’ve had this happen several times with sunflower seed butter. If you boil it a bit longer, it thickens up properly like the almond butter and peanut butter versions.

But! If you boil it too long, it separates. So there’s a fine line there. I recommend trying first with almond butter to see what the mixture is supposed to be like, and then start experimenting.

How to make them

The first step is to mix everything, except for the oats, together in a saucepan. Then you’re going to stir occasionally until it comes to a boil.

Let it boil for 2 minutes, stirring frequently until it’s thickened and becomes caramel-like and looks glossy. The glossiness is probably the best indicator that it’s ready! 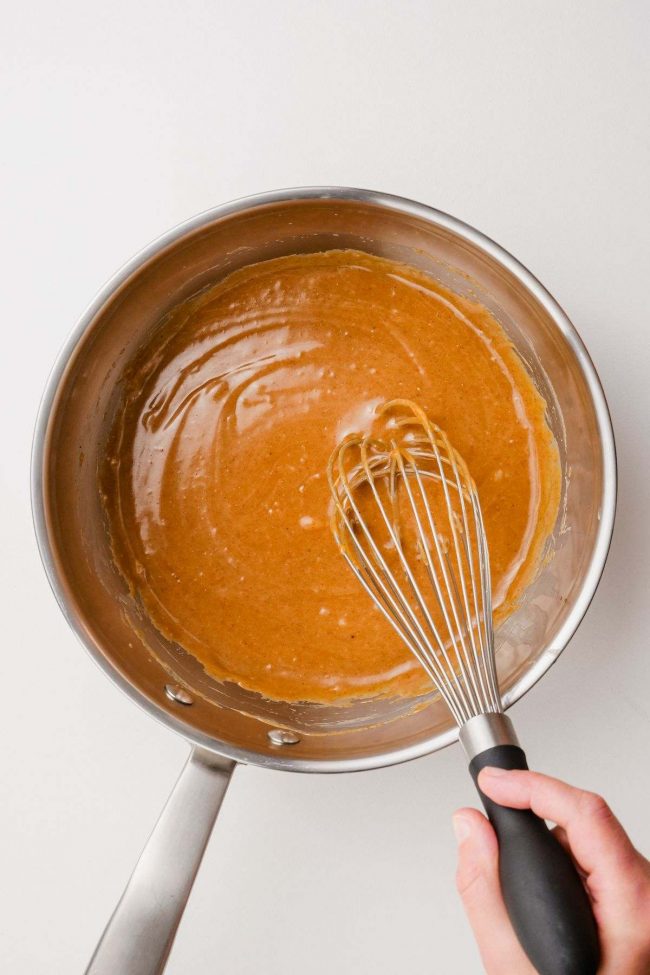 If it’s super runny, then the cookies won’t set properly. 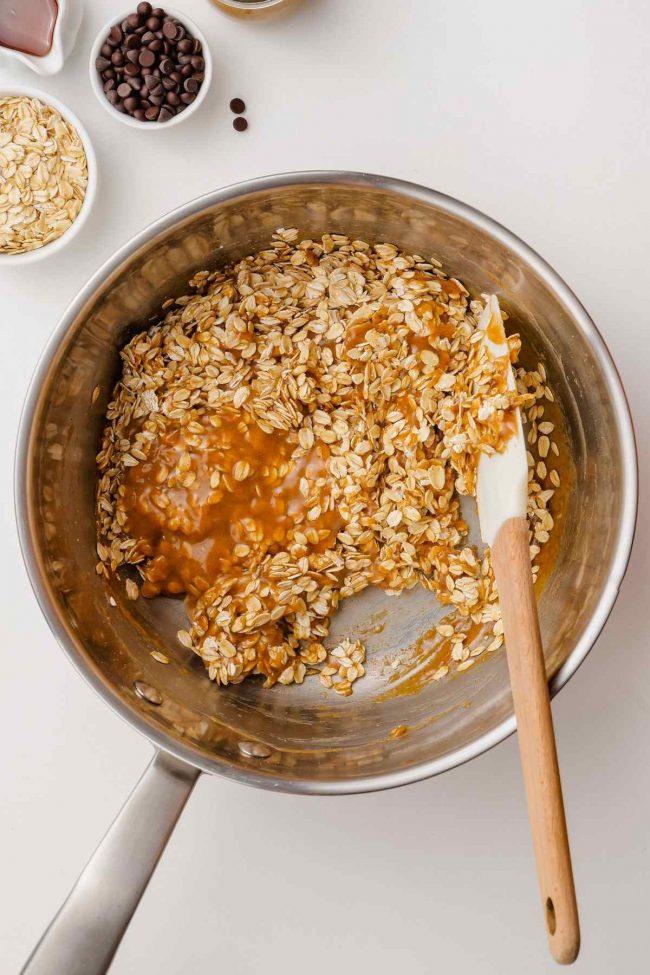 Add your oats. If you want to use raisins or some other add-in that’s not chocolate – add that now.

If you want to use chocolate, wait about 10-20 minutes and stir in the chocolate chips. That way, they don’t melt. 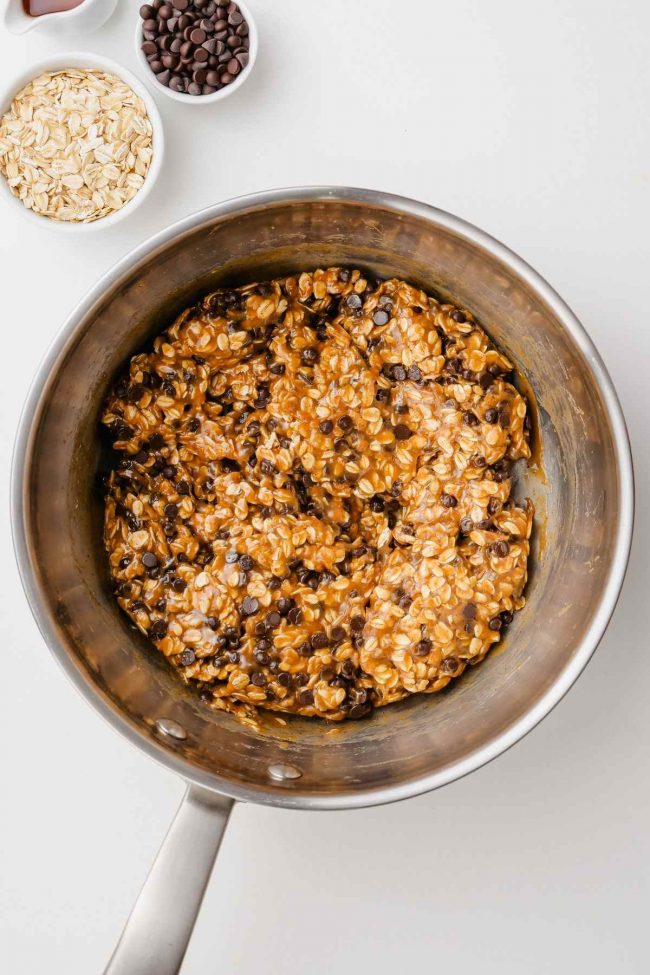 I use a medium cookie scoop to get them equally-sized and place them on a parchment-lined baking sheet or cutting board and chill them until firm.

These no-bake cookies are super simple, but you have to follow the directions. If you make subs, then they may not work.

If you don’t follow the directions and just try to mix them together without boiling for two minutes first… that’s not going to work. You’ll have a runny mess on your hands!

You must boil the mixture for 2 minutes or until it’s glossy like you see in the pictures, and it looks like caramel sauce. Depending on your nut/seed butter and how processed and oily it is, it may take a little more or less time.

If you only make half the recipe, you’ll need less time (about 80 seconds). And if you double it, you’ll need more time.

But again – don’t boil too long! If you do that, the mixture will separate.

I’ve had that happen several times when I got distracted and ignored a timer or when I walked away from the stove. You really shouldn’t do that.

When that happens, I just stir very vigorously for a minute or so until everything comes back together. But it’s kind of a pain, so set that timer. 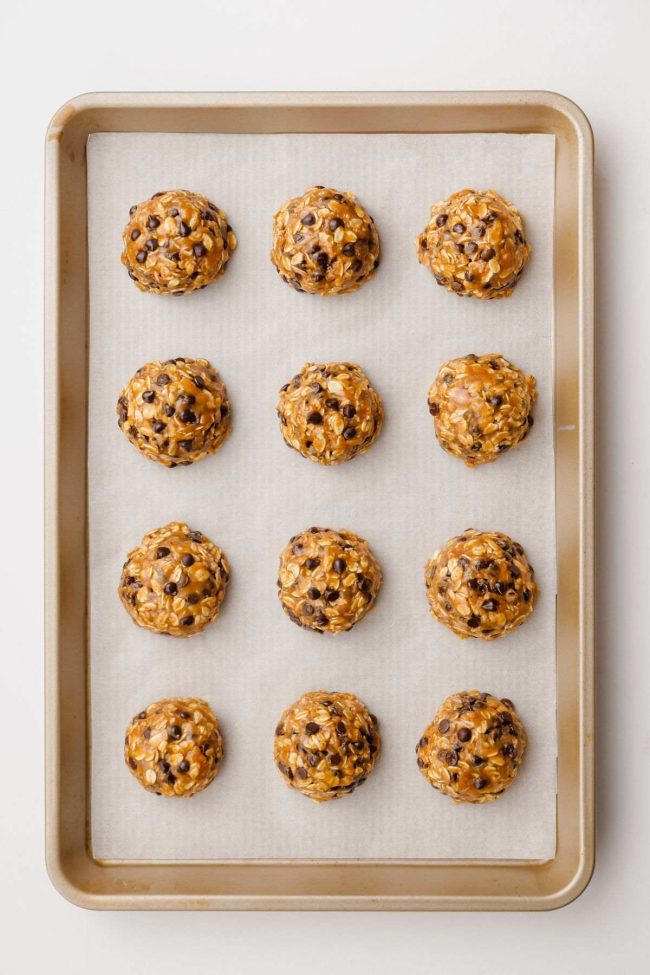 I get so many comments on my Pinterest pins that say, “Oats aren’t gluten-free!!!” But – they are. They’re naturally gluten-free, but the problem is that they can get contaminated in the field or during production.

So if you’re making these vegan no-bake cookies for someone who needs to eat gluten-free, make sure to buy gluten-free oats!

Do note, though, that a small percentage of people who can’t eat gluten also can’t eat non-contaminated oats due to a protein in oats called avenin, which is similar to gluten. For more info, check out this post → Are Oats Gluten-free?

If making something with oats for a gluten-free friend, it’s probably a good idea to ask if they’re okay with oats.

That’s it for today! I hope you’ll enjoy these cookies. If you make them or any of my recipes, I’d love to see pictures of your creations on Instagram, Facebook and Twitter! Please hashtag them #texanerin so I can find them. 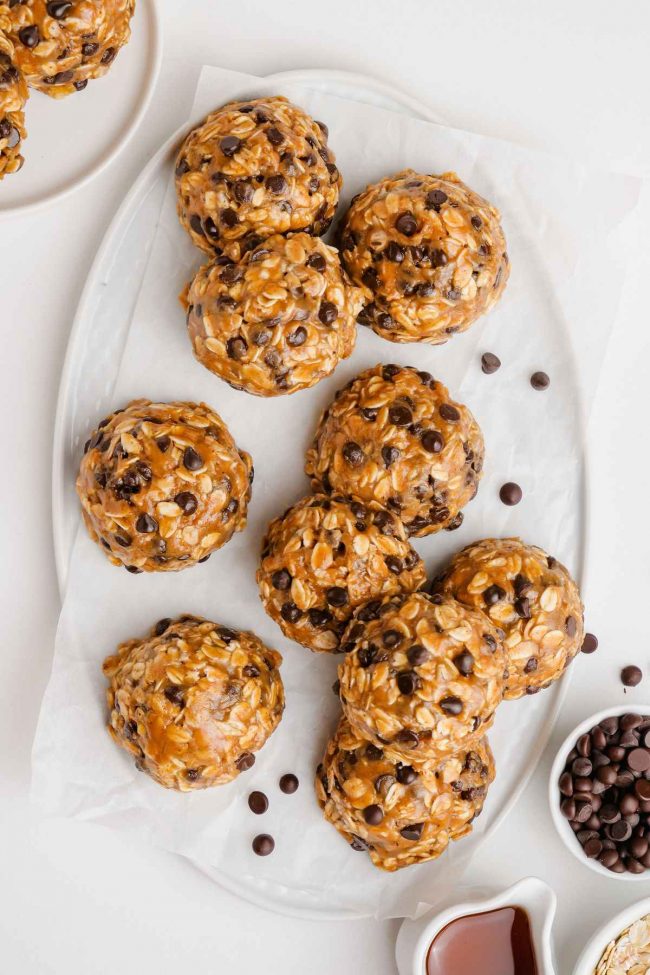 For a cinnamon raisin version:

For a chocolate version:

If making the cinnamon raisin version:

If making the chocolate chip version: 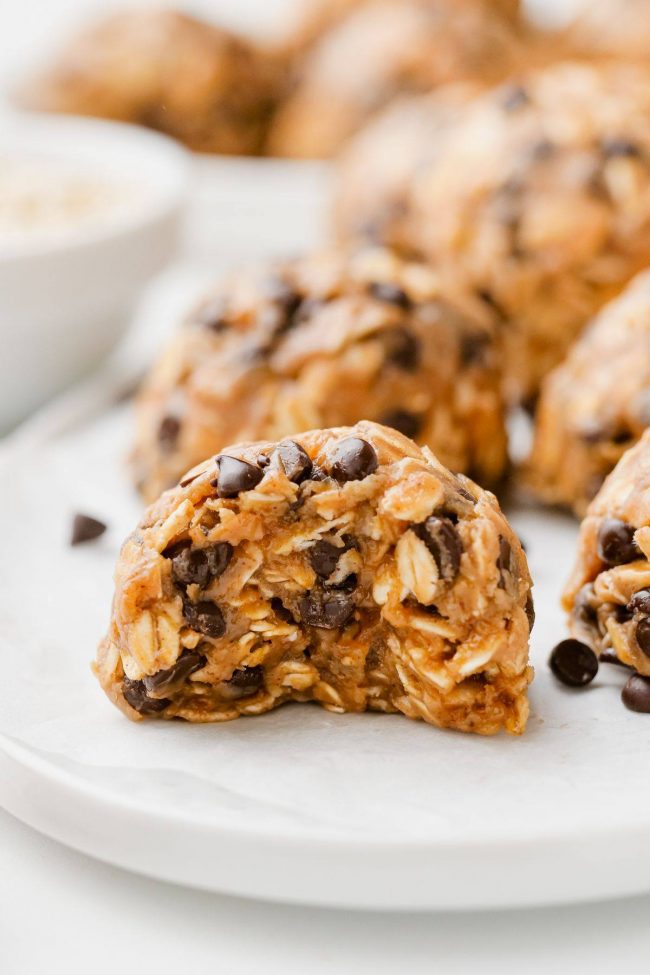