This vegan chocolate pudding is also paleo but you’d never know it! It’s super rich, tastes like regular pudding and is coconut sugar or maple-sweetened.

Like I mentioned in my last post, these peanut butter oatmeal bars, I finally have some new recipes ready to go. And this paleo chocolate pudding is one of my favorites!

I’ve posted some other healthy pudding recipes like this chocolate raspberry pudding and this chocolate peanut butter pudding, but this time I wanted regular pudding! Without avocados, dates or bananas.

Mr. T referred to today’s recipe as “as good as grocery store pudding.” It’s a huge compliment from him because boxed pudding is one of his favorite things. He thinks the no-cook kind totally fascinating. 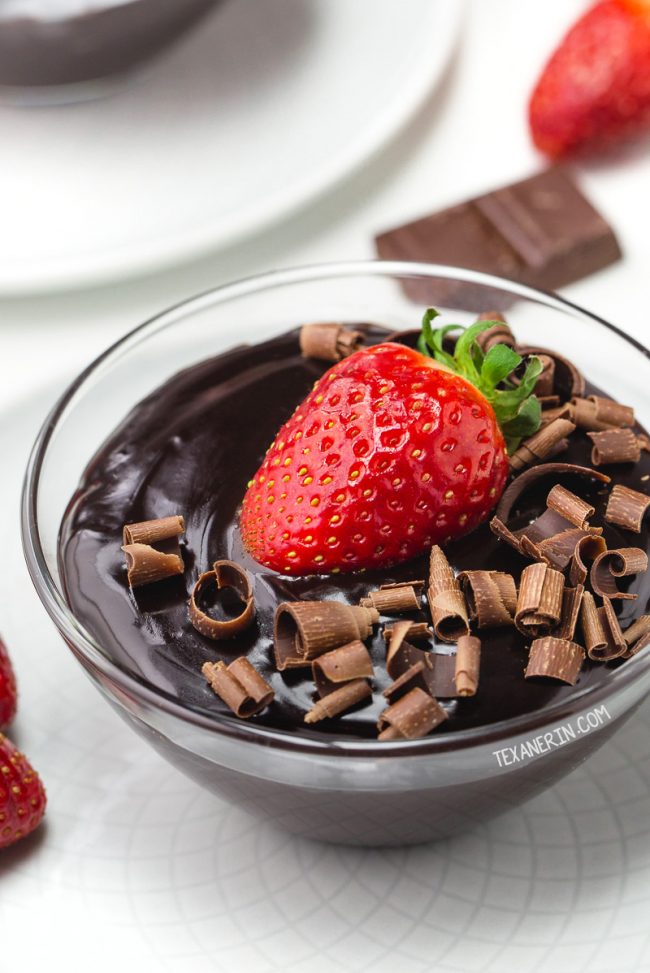 I think, and I’m guessing a lot of you would agree with me once you try it, that this pudding is way better than store-bought pudding. It doesn’t taste the least bit healthy (or, well, this isn’t really healthy but it is made with what I consider healthier ingredients) and doesn’t taste coconutty, either.

He also kept suggesting I use this pudding in other recipes. But I have no idea what! Maybe to fill cupcakes? Anyone have some ideas?

Something else he wanted to do was add booze to it. This pudding is so thick you could probably add a few tablespoons after it’s cooked (which would also de-paleoify this pudding).

Or you could not use the full amount of coconut milk (maybe 2-4 tablespoons less, depending on what kind of alcohol you use) and then add that amount after it’s cooked to the pudding. 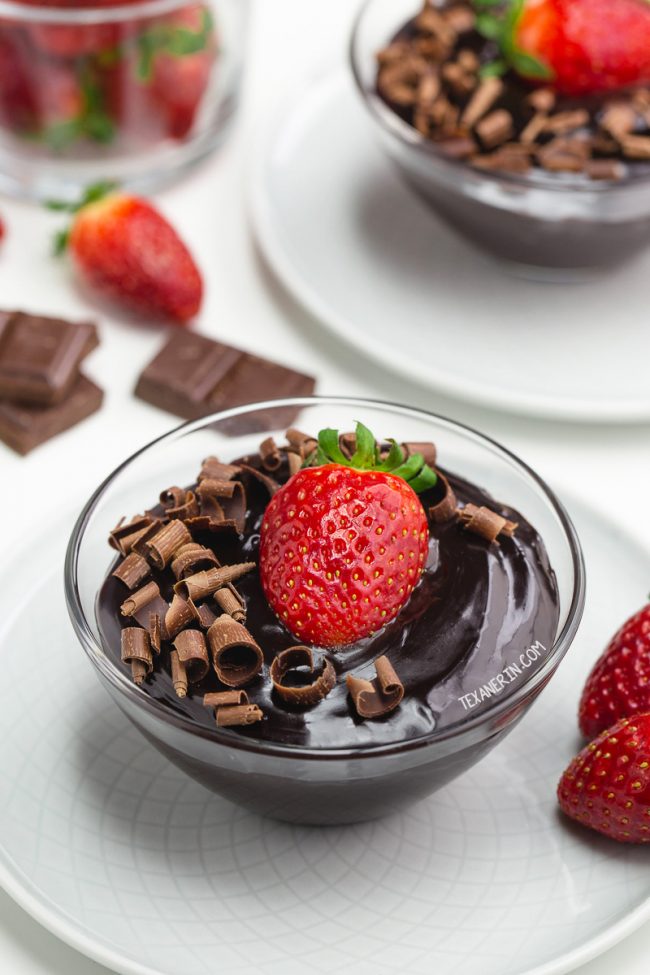 Like a lot of my recipes tend to be, this pudding recipe is super thick and rich. Light desserts aren’t my thing.

If you’re like me, check out my vegan chocolate ice cream or paleo chocolate cheesecake some for more ultra decadent chocolate desserts.

Since this vegan chocolate pudding doesn’t have dates or bananas, it’s got quite a bit of sweetener. Like 1/2 cup. But it yields 2 cups of pudding and given how rich it is, I think saying that it’s 4 servings is reasonable.

Two tablespoons of maple syrup or coconut sugar for some insanely delicious pudding doesn’t seem that bad! I remember seeing a cupcake recipe once that had 13 tablespoons of sugar in each cupcake. I’m sure it was delicious but holy moly. So much sugar!

For another healthy pudding that’s light on the sugar, try this chia seed pudding from Belly Full! I enjoyed my pudding for breakfast but I suppose this is a healthier option. ;) 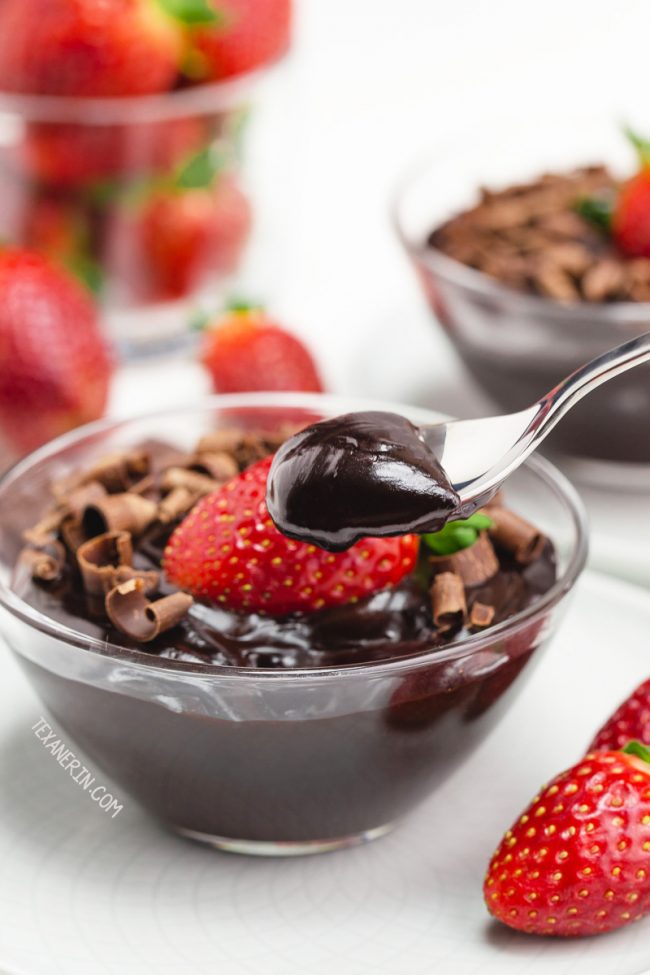 Questions about this vegan chocolate pudding? 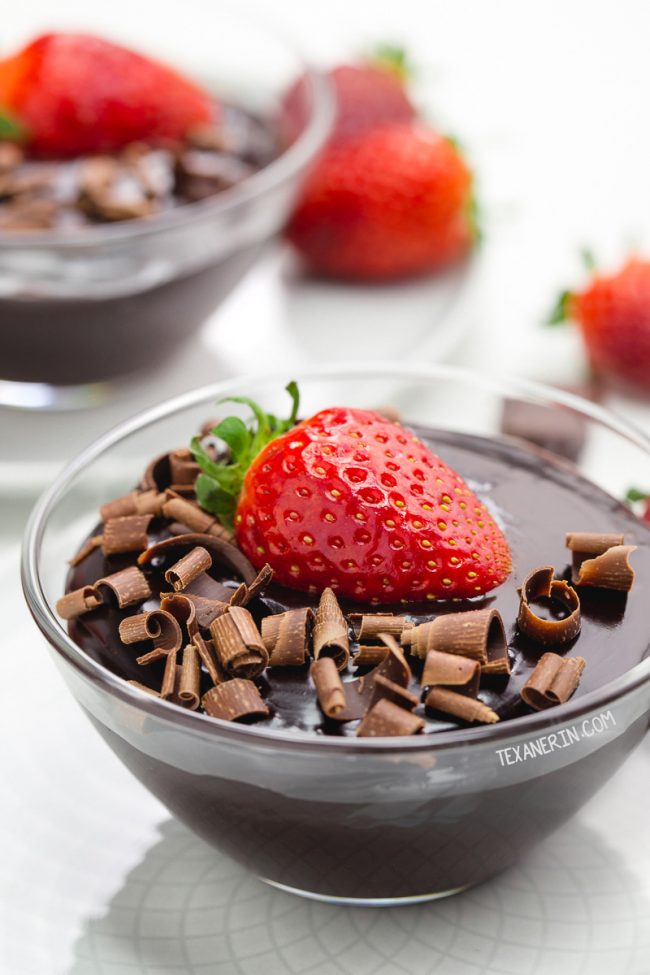 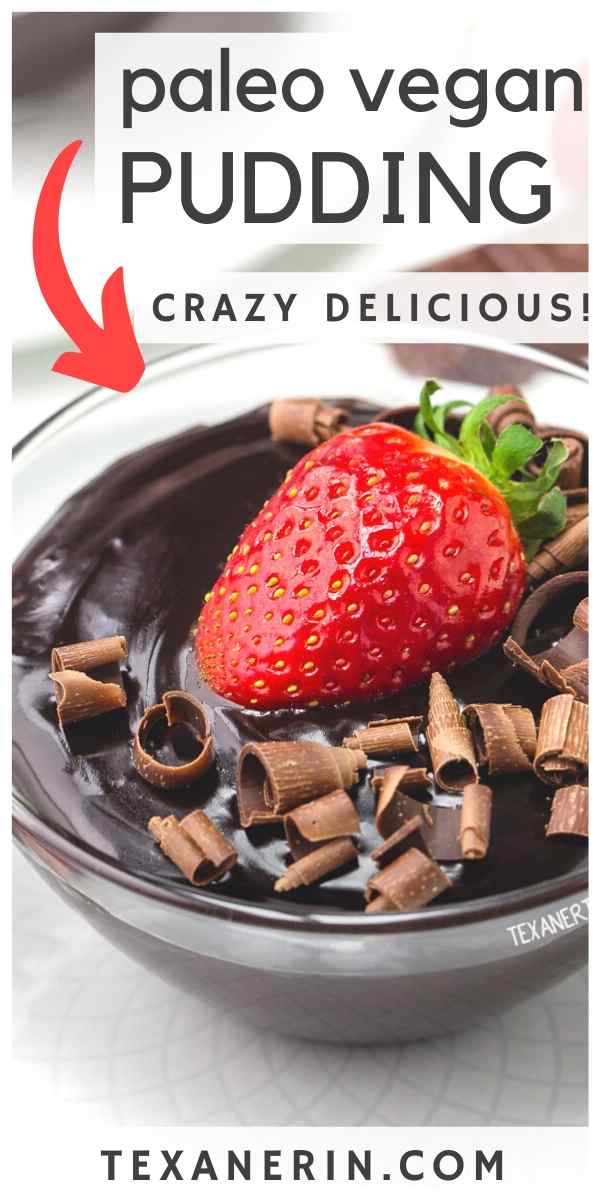