This Vegan Gelato is insanely rich and decadent! It’s made with coconut, doesn’t have a coconutty taste. It’s paleo, nut-free and no-churn. It’s also super easy with only 5-ingredients and a little salt.

Dairy-free ice cream is usually too icy for my liking. I’ve tried many different paleo ice cream recipes, but never liked any of them. Then I realized I already have the perfect recipe. When I made this Vegan Chocolate Cream Pie, I froze the leftovers and the filling tasted like ice cream.

This gelato is far from icy. It’s creamy and chocolaty and everything you want in ice cream. 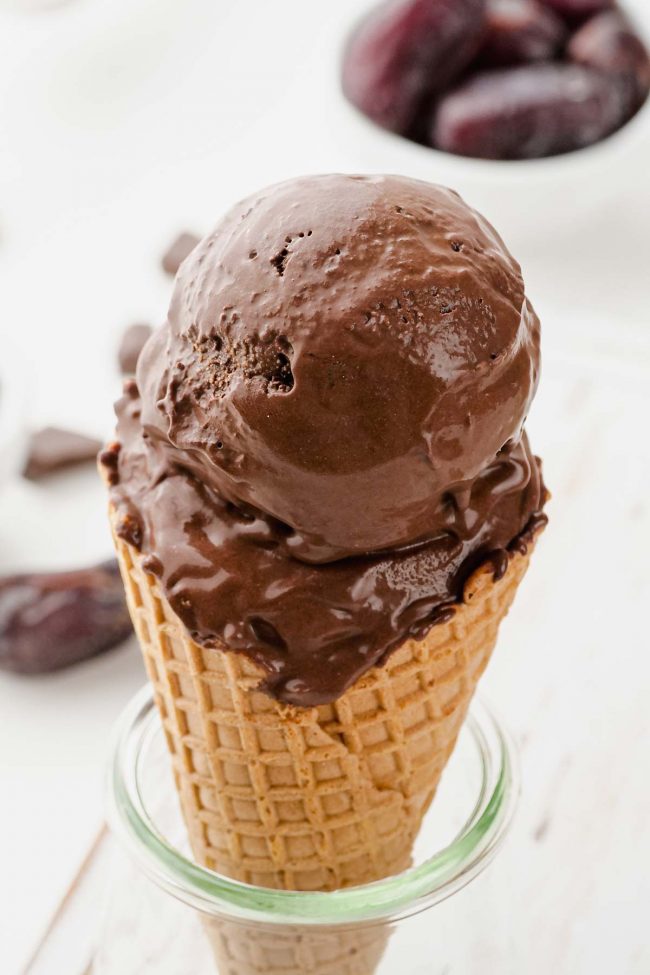 Gelato is Italian meaning ice cream in English. Both are sweet, frozen treats made of milk, cream and sugar. Gelato has been around since the 16th century and is a favored dessert of many Italians.

While the two words can be directly translated and they seem quite similar, there are some differences between the two.

Gelato is denser and richer than American ice cream, which is milkier and creamer than an Italian gelato.

Interestingly, egg yolks are a common ingredient in some ice cream recipes, whereas, gelato doesn’t usually call for egg yolks. Plus, gelato uses more milk and less cream. Yolks are used as a natural emulsifier and help give ice cream that silkiness without the use of an ice cream machine.

USDA regulations require ice cream to be at least 10% butterfat. Most storebought brands have between 14 and 25%. Italian gelato, in contrast, has between 4 to 9% butterfat which makes gelato flavors more intense because the butterfat isn’t coating your palate. And although you would think that gelato would be less creamy, it actually seems creamier than American ice cream. 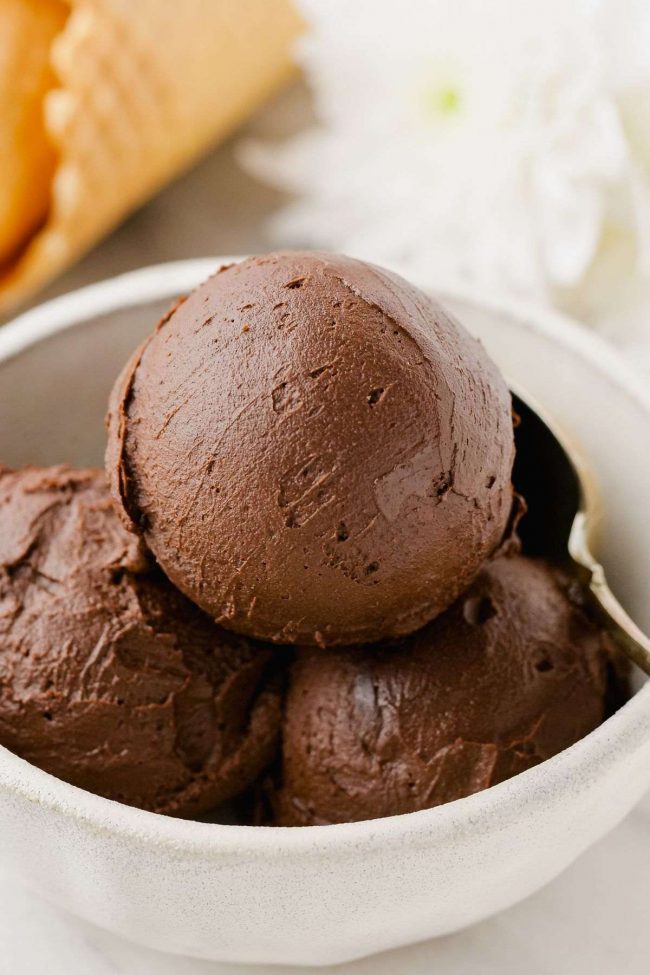 There’s less air in gelato compared to ice cream, which keeps it dense yet silky and more intensely flavorful. Ice cream is normally made up of 50% air by volume, gelato – 20 to 35%.

In the traditional way of making gelato, it is churned at a much slower speed than ice cream.

Also, there’s a difference in temperature. Gelato is served between 10 to 20 °F, but ice cream is served at 6 to 10 °F. I mention this because we generally taste things better when food is warmer, and it applies to gelato as well.

One other minute difference is ice cream is scooped with a half-round scooper, and scooping gelato is done with a spade. That’s not to say you need to go buy an Italian gelato spade to serve this vegan gelato. ;) 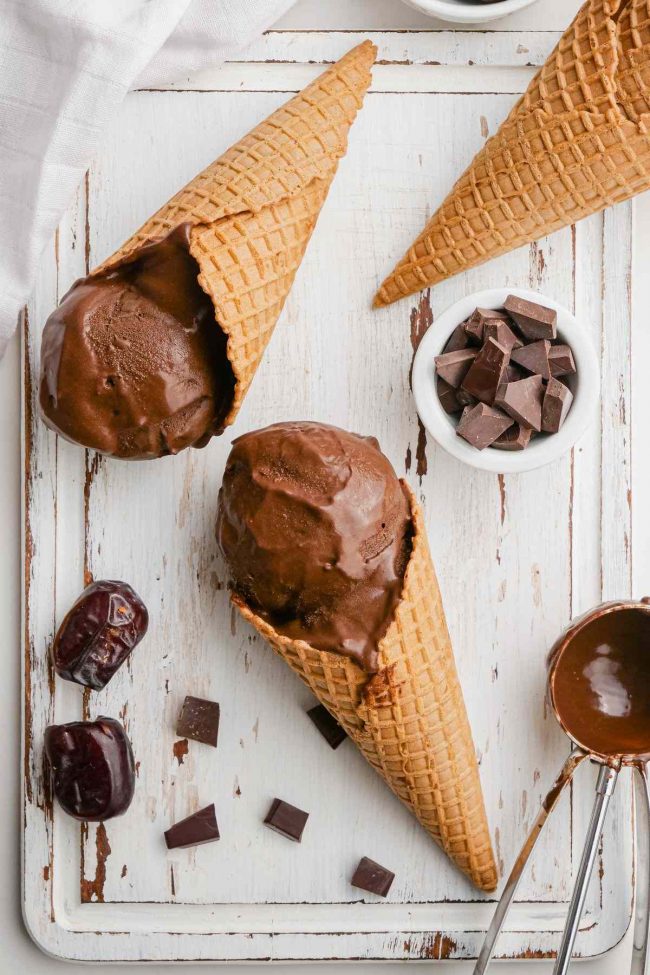 In a high-speed blender, add all of the ingredients, in the order listed. You don’t want the coconut sugar and cocoa powder at the bottom.

It’s much easier to blend if you have the liquids at the bottom. 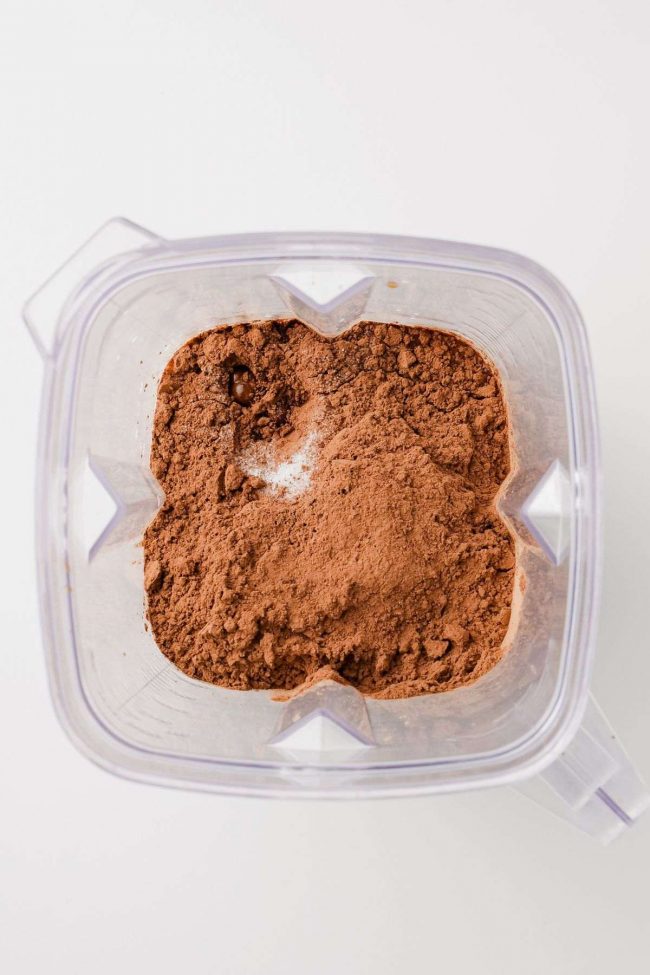 Blend until completely smooth and no date lumps remain. It doesn’t take long. Maybe a minute.

But definitely don’t stop before it’s 100% creamy! Even if you like chunks of dates in your ice cream, you need to blend until smooth, because those pureed dates are needed to sweeten the gelato. 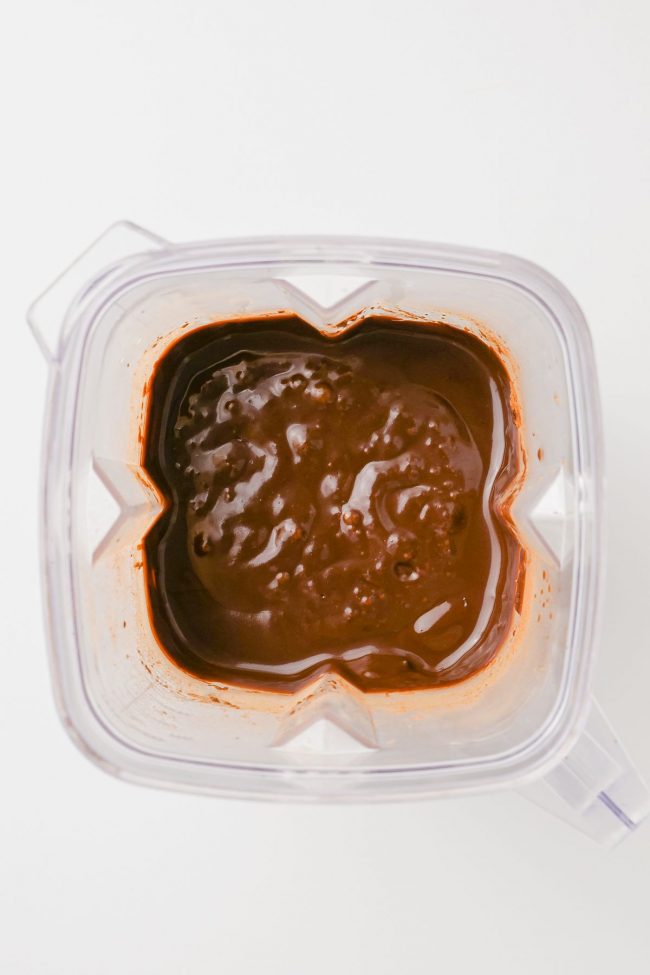 Pour into a freezer-safe container and freeze for 4 to 8 hours.

Make sure to use a container that’s freezer-safe. I’ve used some plastic tupperware containers that have cracked while defrosting. 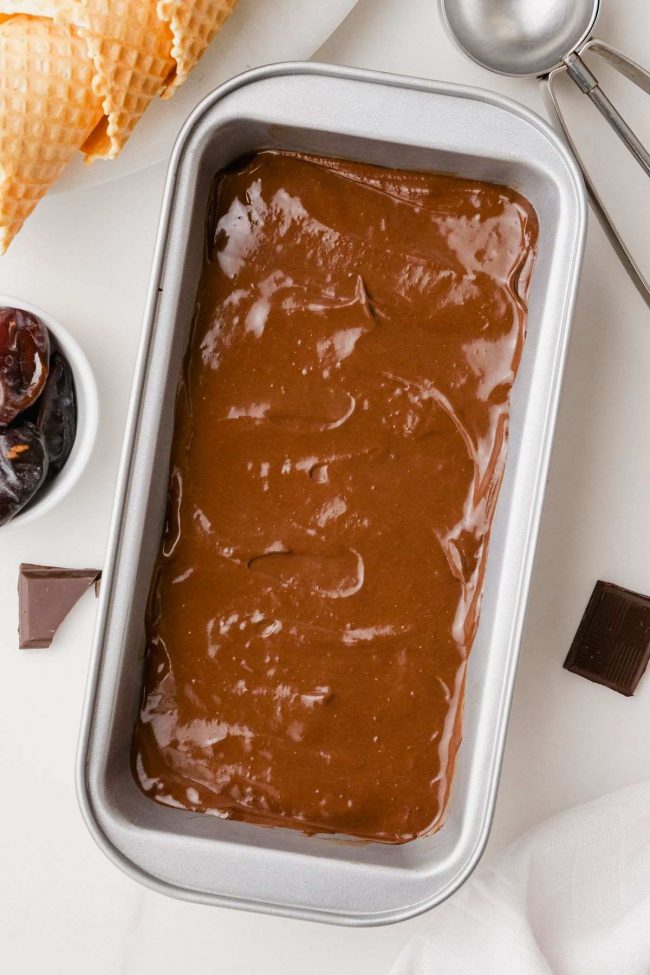 Scoop and serve! It’s super rich, so you really don’t need much.

Note: This gelato is too firm to scoop with an ice cream scooper straight out of the freezer, but it will scoop up nicely if you set it out for a bit and let it defrost.

I’m never patient enough to wait the 5 minutes, so I stab it with a fork to take what I want, and then it softens quickly in my bowl. If you use a metal loaf pan to freeze the gelato, you might have to wait more like 10-15 minutes to get it to defrost nicely.

This recipe yields about 2 3/4 cups (675 ml). It might not sound like much, but when you consider how rich it is, it’s not such a small yield after all.

You do not want to serve multiple scoops of this to your guests. One is likely enough.

Yes, there are four scoops in the bowl in some of the photos, but a bowl with a single scoop doesn’t look very appealing. ;) 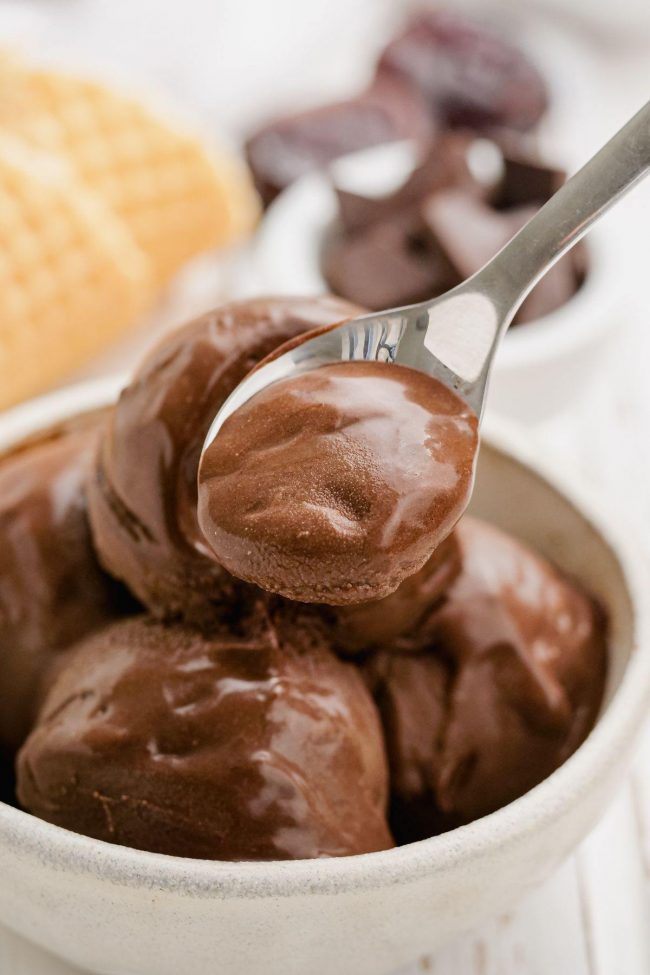 Do I have to use coconut milk?

Using dairy-free alternatives like soy or almond milk would result in something super icy. You would probably have to use an ice cream maker. If you want to use something other than coconut milk, you might want to find a different recipe.

Do I have to use raw cacao powder?

Nope. I used raw cacao powder because of its health benefits.

It’s super important to note that if you use cocoa powder, such as Dutch-process or regular “natural” cocoa like Hershey’s, then you’ll need less sugar. What range to use is listed in the recipe.

I used 2/3 cup (166 grams) of coconut sugar with cacao powder, with the result being about as sweet as normal ice cream. With Dutch-process, I used 1/2 cup (150 grams) to achieve the same level of sweetness.

I have a whole post dedicated to how and when to use cocoa/cacao powders. You can find that here → Cacao vs Cocoa. 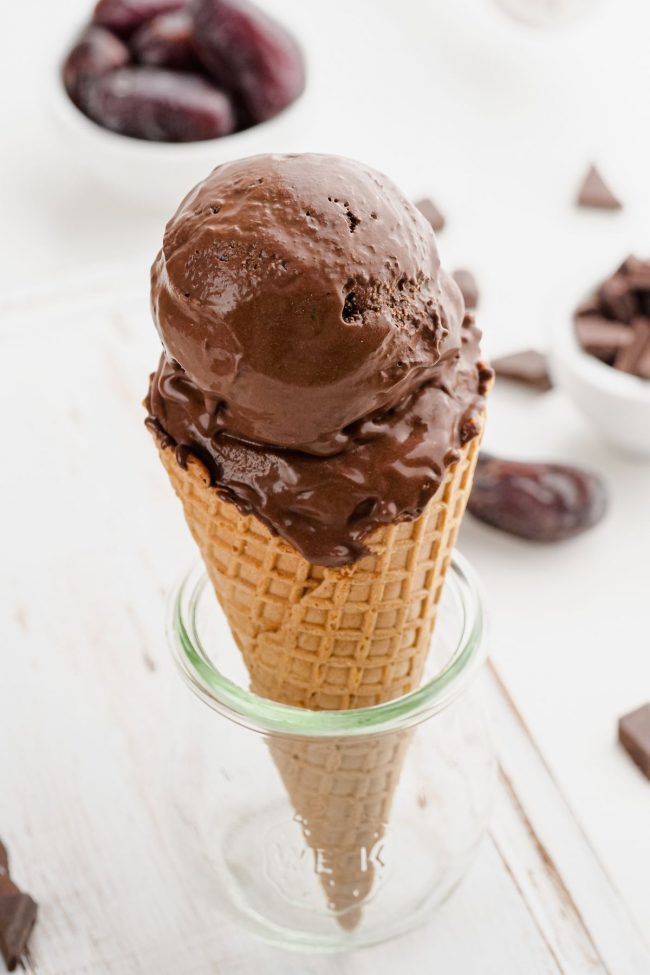 
This vegan chocolate gelato is one of those desserts that even non-paleo and non-vegan friends will love. Honestly, it tastes SUPER luscious and no one will know it’s a healthy treat.

If you try this gelato or any recipes you find here, I want to hear about it! Just tag your photos #texanerin on Instagram, Facebook, and Twitter so I can easily find them. Enjoy!