Is Peanut Butter Vegan? (And What Brands To Buy)

Is peanut butter vegan? The answer is yes if it just contains peanuts and salt. If it contains more than that, you’ll want to keep reading.

Most peanut butter is manufactured using three simple ingredients: salt, oil and of course peanuts. Regular peanut butter (so, not runny natural peanut butter) has additives such as cane sugar, molasses, agave syrup or other types of sugar for added sweetness.

But it gets tricky. Some types of peanut butter contain honey, which is not vegan.

There are some other issues, like Omega-3 fatty acids. These are sometimes added to certain brands of peanut butter due to their nutritional properties.

The problem is that those Omega-3 fatty acids are sourced from fish (anchovies and herring being the most common species harvested). The fishing for these species has been implicated in some decidedly non-eco-friendly activity, aside from the harm to the fish themselves. 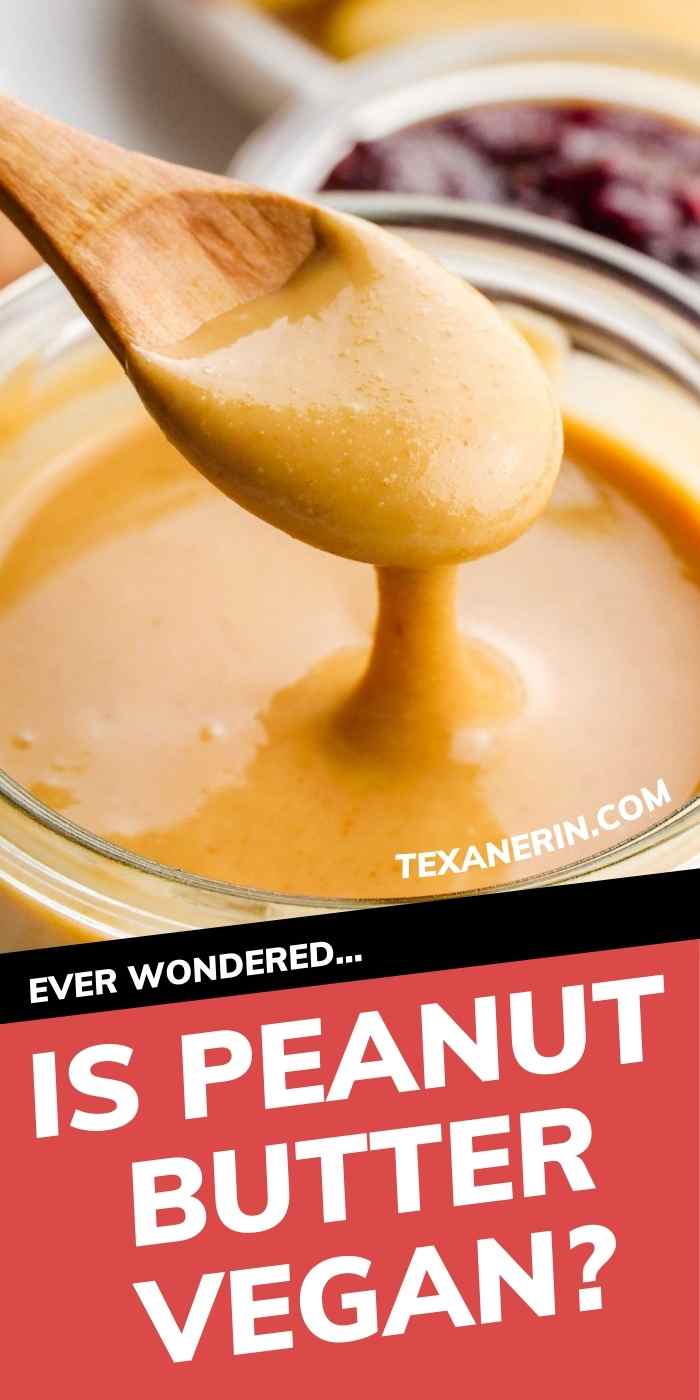 There’s another problem when it comes to peanut butter brands that add sugar. Some refined sugar is processed using bone char, which whitens and purifies the sugar – and that bone char has its origins in bones from slaughterhouses.

If you’re strictly against processed sugar due to animal bones being used during the processing, then you’ll want to avoid anything with added sugar. Which are most products.

In its raw form, palm oil is technically vegan. There aren’t any animal products or even by-products in there.

But it’s a bit of a controversial ingredient in the vegan world as many species of animals are facing extinction as a result of palm oil production.

Huge parts of the rainforest are being destroyed to make more palm oil plantations. Palm oil is clearly really, really bad for the environment and animals.

WWF has an interesting article on why boycotting or replacing palm oil is not a solution.

I was quite surprised to read this tweet from Jif that says that 100% of their purchased palm oil indeed comes from sustainable sources. So google your favorite peanut butter brand + palm oil to see what you can find out!

A fast-moving production line, even if subject to the highest levels of quality control, is fertile ground for cross-contamination with non-vegan ingredients. There is also the consideration that even in the most highly automated facilities, there is a human element.

All it takes is one person working with non-vegan ingredients to neglect their hygienic practices (for example, not replacing gloves regularly).

Let’s turn to PETA for some guidance. According to the organization, your vegan credentials would not suffer if you were to inadvertently consume a product that has been contaminated with a non-vegan ingredient.

It’s a simple fact of life that sometimes cross-contamination is close to impossible to avoid – go to your favorite restaurant and order a vegan meal and the chances that the cookware being used to prepare it has been exposed to non-vegan products.

How do I know what brands are vegan?

So, how do you ensure that the peanut butter that you are purchasing meets all the criteria to be classed as truly vegan?

Your first step is to review the ingredients on the packaging. If you have any doubts, ask the manufacturer – most are more than willing to go on record about the status of their products.

For added peace of mind, keep a lookout for the Vegan Action certification on the packaging. They have a database of over 10,000 vegan-friendly products, so it might be a good idea to have a look at which brands of peanut butter are on that list. 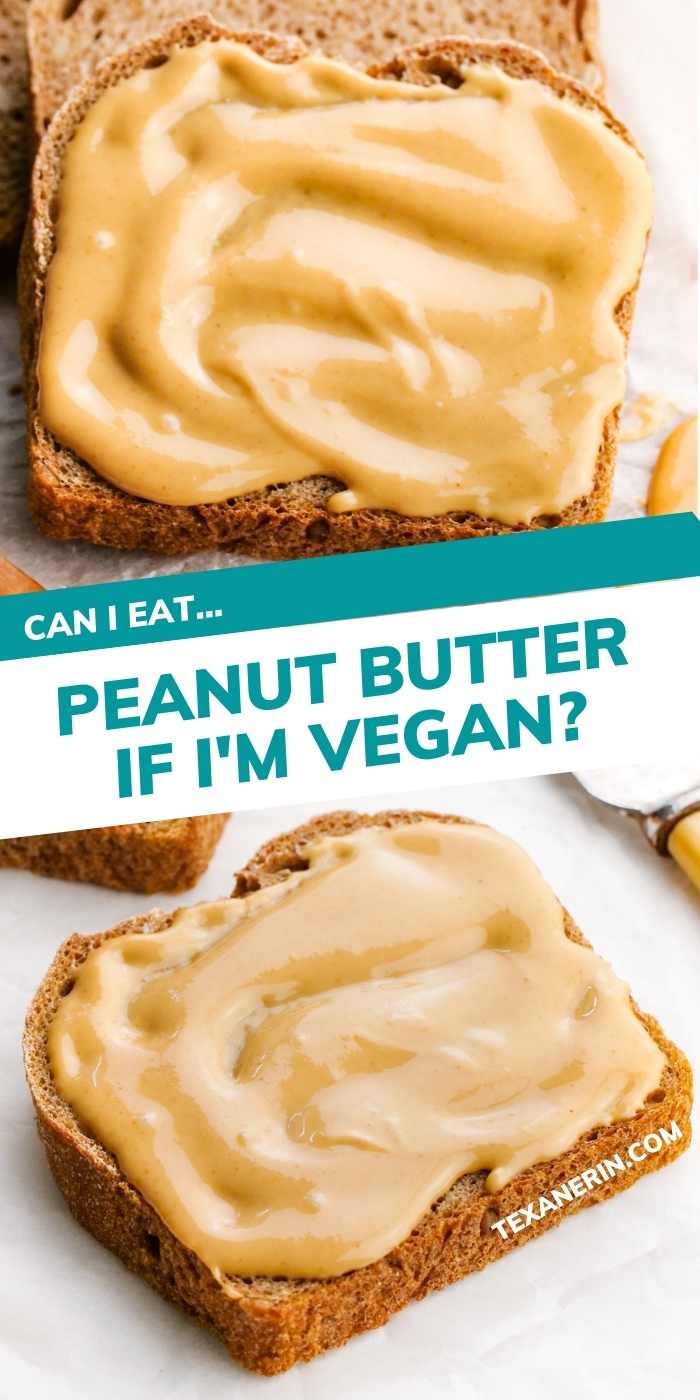 What about Jif and Skippy?

The good news is that two of America’s favorite brands of peanut butter are vegan-friendly, and most of their products don’t contain any non-vegan ingredients.

Most of Skippy’s products are vegan. But they have three kinds of peanut butter with honey in the name. Clearly, those aren’t vegan.

They also have four types of snack foods, and none of those are vegan, either.

Note that Jif’s other products (which do not contain any non-vegan ingredients) are at risk of cross-contamination because their omega-3 and honey peanut butter are made and packaged at the same place as the other peanut butters. It’s all a question of how strict you are!

There are also some well-known options that do not contain white sugar. These include Smuckers Natural Peanut Butter and Earth Balance (they sweeten their product with agave syrup).

Reviewing product labels is time-consuming, and it can get a little irritating. But it’s an easy way to ensure your peanut butter is vegan! 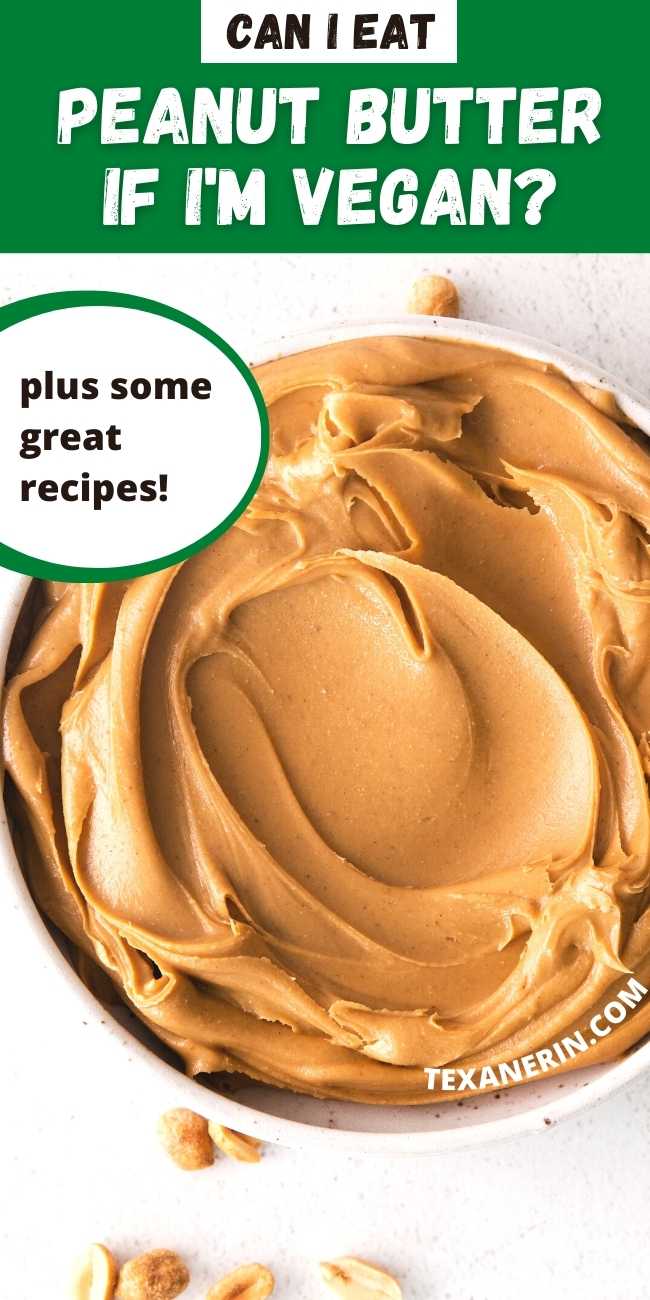 Make your own peanut butter with just 1 ingredient

Get yourself some roasted, salted peanuts, toss them in a high-speed blender or food processor and blend until creamy. I have a whole post and video here about how to make peanut butter.

I have over 60 peanut butter recipes, of which most are vegan.

Here are my favorites!

Also be sure to check out my other vegan recipes for some more inspiration!

I hope I’ve answered your question on whether or not peanut butter is vegan. :) If you have any other questions, leave a comment below and I’ll be happy to help answer them.