This keto chocolate pudding is no-cook, rich, creamy and quick to put together! It’s also vegan but can be made with dairy if you prefer.

With today’s keto chocolate pudding recipe, I’ve now got something for everyone! If you’d prefer a non-keto recipe, scroll down where you’ll find all my other pudding recipes.

This kind of recipe is my ideal dessert. No-bake, no-cook, rich, creamy, and ultra-smooth. Just dump everything in a blender, blend and you’re done.

This keto pudding recipe is the same as my chocolate chia pudding, but with keto sweetener instead of maple syrup.

If you use something other than canned coconut milk, it’ll be less rich but still pretty thick. One thing you need to do is make sure to add the water.

I just remade this pudding before posting. I made it tons of times over the summer but apparently had forgotten quite a bit.

Tonight, I was absent-minded and forgot to add the water and thought it was thick enough without it. So I didn’t bother adding it when I realized my mistake.

But then I put it in the fridge and it was way too gloopy after chilling for an hour or two. It was weird.

And that’s when I remembered why I originally added the water to the recipe back in the summer. Don’t omit it! 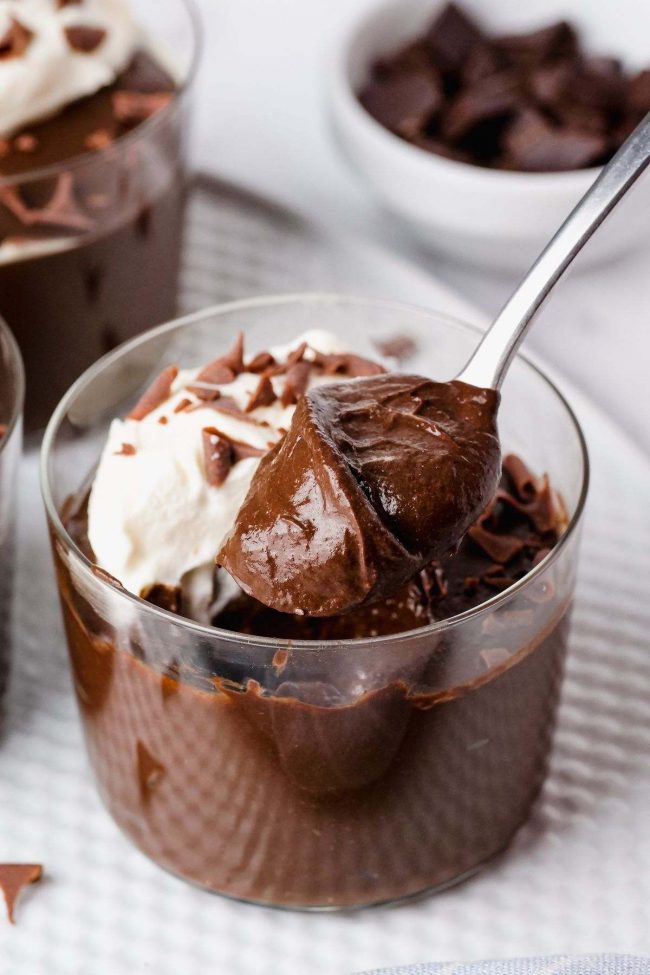 No lumps or weird texture

I haven’t liked most chia pudding recipes I’ve tried. I just don’t like the lumpiness. It kind of weirds me out.

Normally, you stir all the pudding ingredients together and then add the whole chia seeds. With my recipe, you actually pulverize the chia seeds with half of the coconut milk and the sweetener first.

Then you add the other ingredients.

The result is totally smooth! The texture is really like regular no-cook pudding.

If you don’t have a high-speed blender, you could use store-bought ground chia seeds or grind your own in an electric coffee blender. Then use a food processor to blend. When measuring them out for the pudding, go by weight instead of volume. So use 50 grams of ground chia seeds.

I don’t think a food processor will get it 100% smooth, even with using previously ground chia seeds, though. I could be wrong! 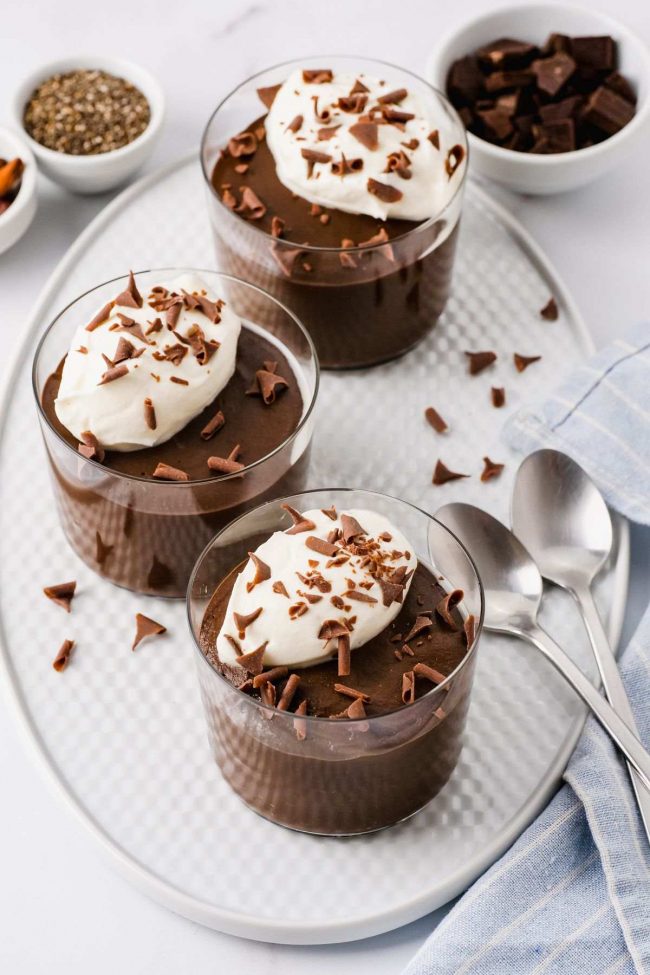 If you have a small food processor, a single batch might work.

You could do the same with a regular blender and I think it would get it super creamy. Again, just a guess. :)

An immersion blender should probably also get it decently creamy! 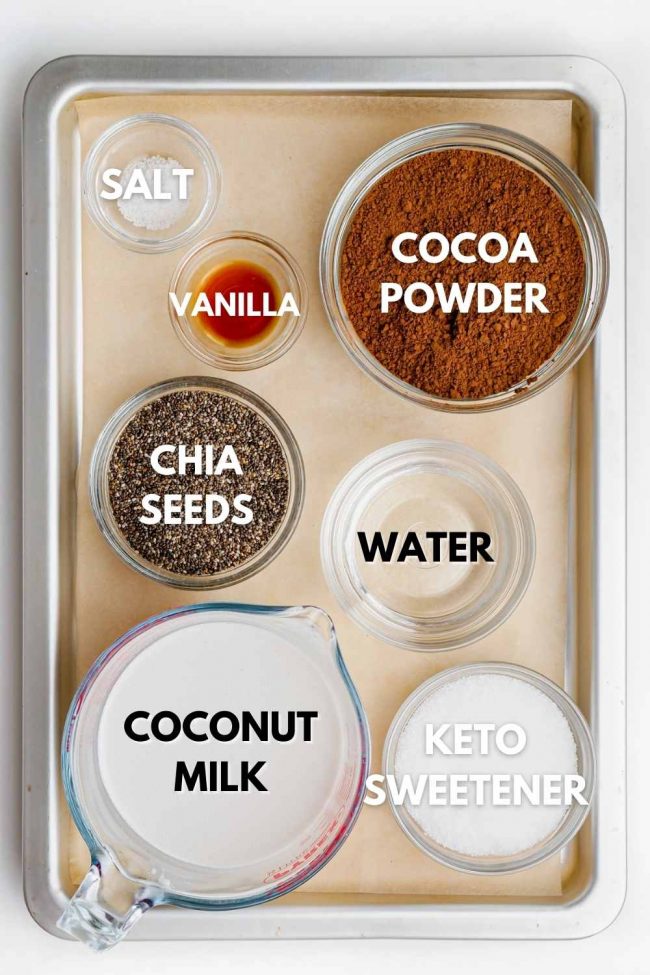 It’s no-cook and super easy. You just toss everything into a high-speed blender. Blend. Done!

It’s kind of thin after blending but chilling thickens it up. You can see what I mean in the video.

As someone who fought against posting keto recipes for years, because I really didn’t like keto sweeteners, if I post a keto dessert recipe, you know it’s got to be good. ;)

I used the same blend of sweeteners that I’ve used in all my keto recipes so far. While you’re enjoying this pudding, it tastes like regular pudding made with cane sugar.

Only later, really like 10 minutes later, did I notice the sweetener aftertaste. My husband didn’t notice it at all.

I made it once with all cashew milk and the sweetener taste was pretty obvious. So I can’t recommend that. I think all coconut milk is the way to go but you can experiment with mixing types of milk. There’s more on that below.

I think this will also largely depend on your brand of cocoa powder. Use a brand you love and that has a deep, chocolate taste. I used Dutch-process but various random German store-brands that aren’t useful to those of you in the US. 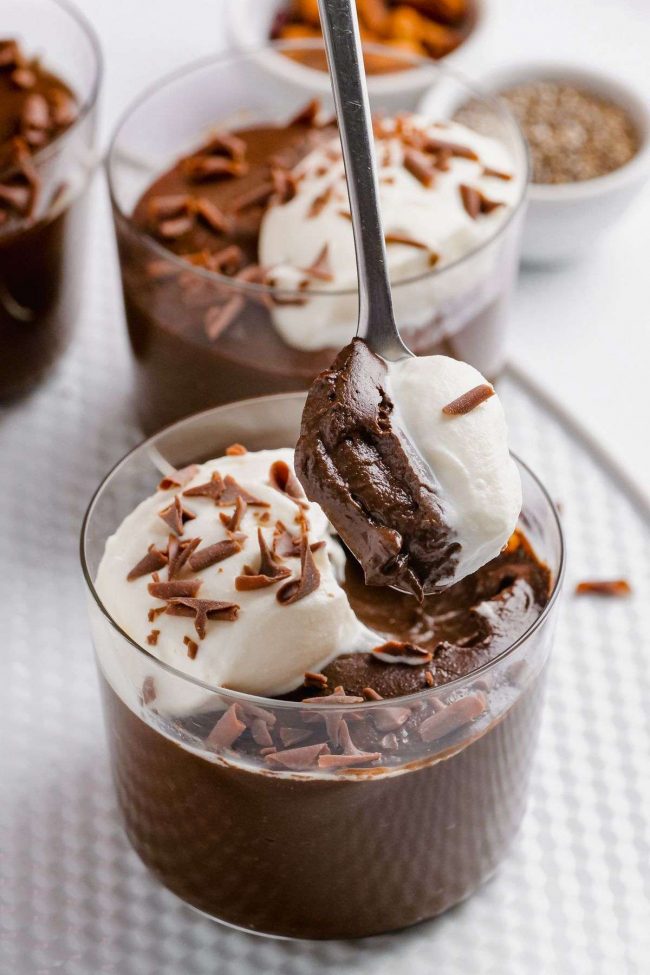 If you want to make up a big batch of this sweetener, use:

Then you can make these delicious keto dessert recipes:

Or really, just the stevia. You need a bit less than 3/16 teaspoon stevia (or actually, 1/8 teaspoon + 1/32 teaspoon to be exact). If you’ve got these measuring cups and spoons, it’s no problem. If you don’t have those measuring spoons, winging it makes me nervous.

Also, I tested the measurements using measuring spoons an endless number of times for this recipe. Even when using the same spoons and a knife to level them out, the results were different each time. And when I used different tablespoons, the differences were as big as 33%!

As in, 1 tablespoon of sweetener weighed 15 grams with one brand of tablespoons but another weighed 10 grams. Both were marked as 15ml. It’s crazy but I did it multiple times. So please, get a scale. ;)

By the way, this sweetener isn’t a 1:1 sub for granulated sugar. When using this blend, I use about half the amount of granulated sugar called for, or maybe up to 2/3. It depends on the recipe. 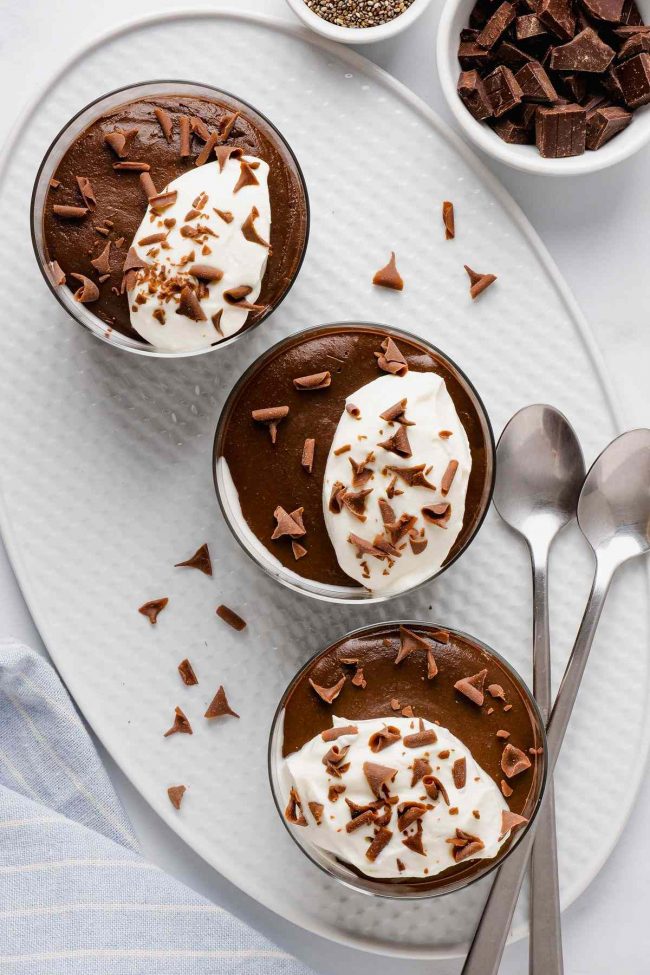 If you can have dairy…

Feel free to use dairy, if you prefer! I used canned coconut milk, but you can use whatever mixture of dairy you’d like.

Canned coconut milk is usually around 19% fat. So light cream would be your closest equivalent.

But if you want to mix and match, like milk combined with some heavy cream, here’s how much fat everything has.

The pudding is already pretty rich and decadent with 19% fat, so I probably wouldn’t do all whipping cream or heavy cream. 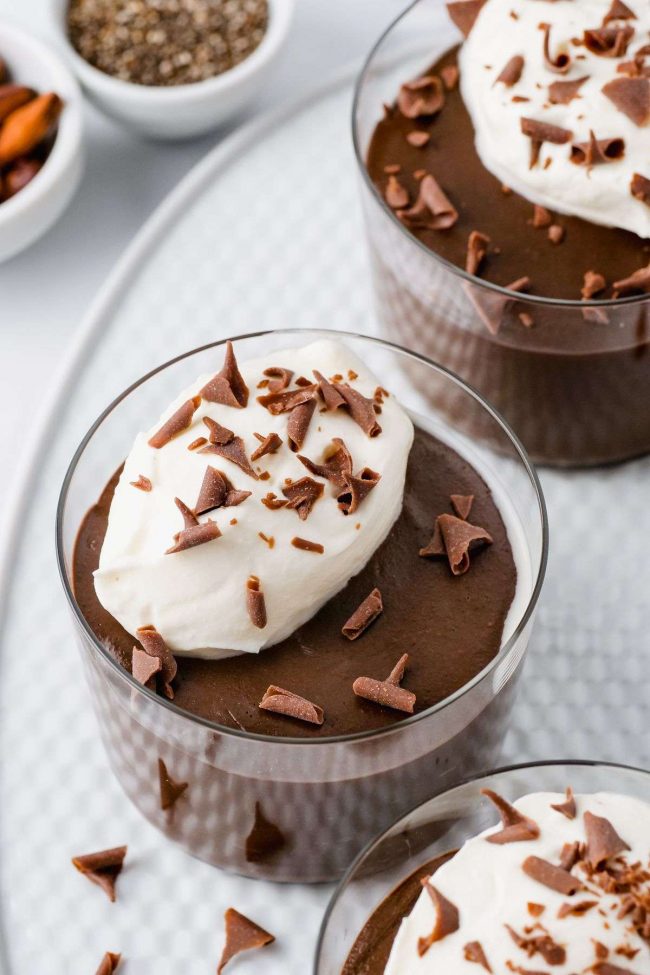 The chia seeds are used instead of cornstarch or arrowroot to thicken the pudding. It adds more nutritious goodness, too!


Don’t be fooled by their size, chia seeds are a powerful nutritional addition to your diet! 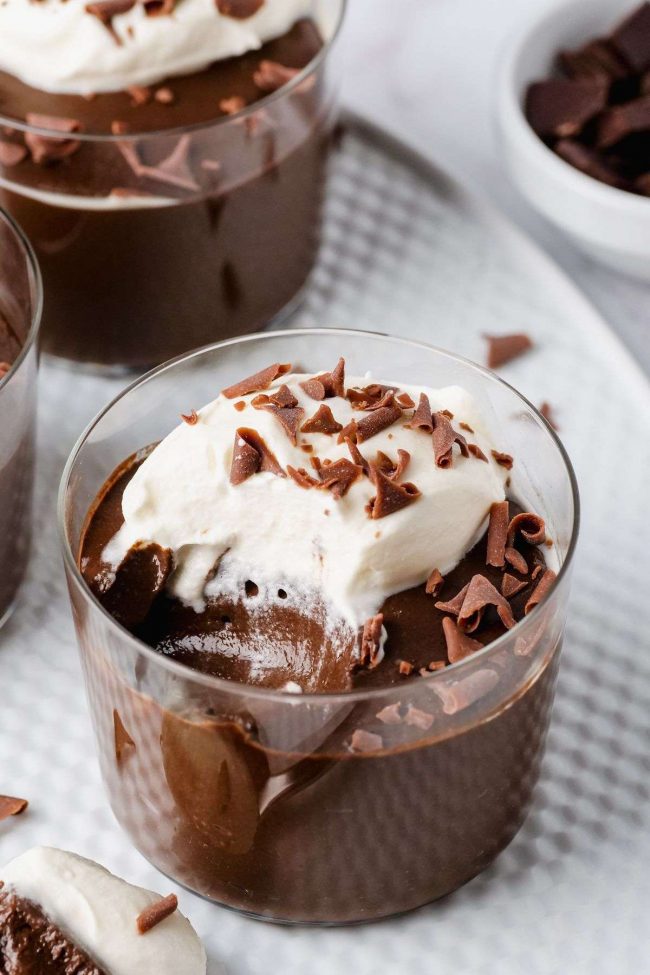 That’s easy! Use 1/2 cup of maple syrup instead of the keto sweetener. Chill it for a few hours so that it can thicken.

If keto isn’t your thing, check out my other non-keto options:


The rest are all paleo/vegan or at least have options for that: 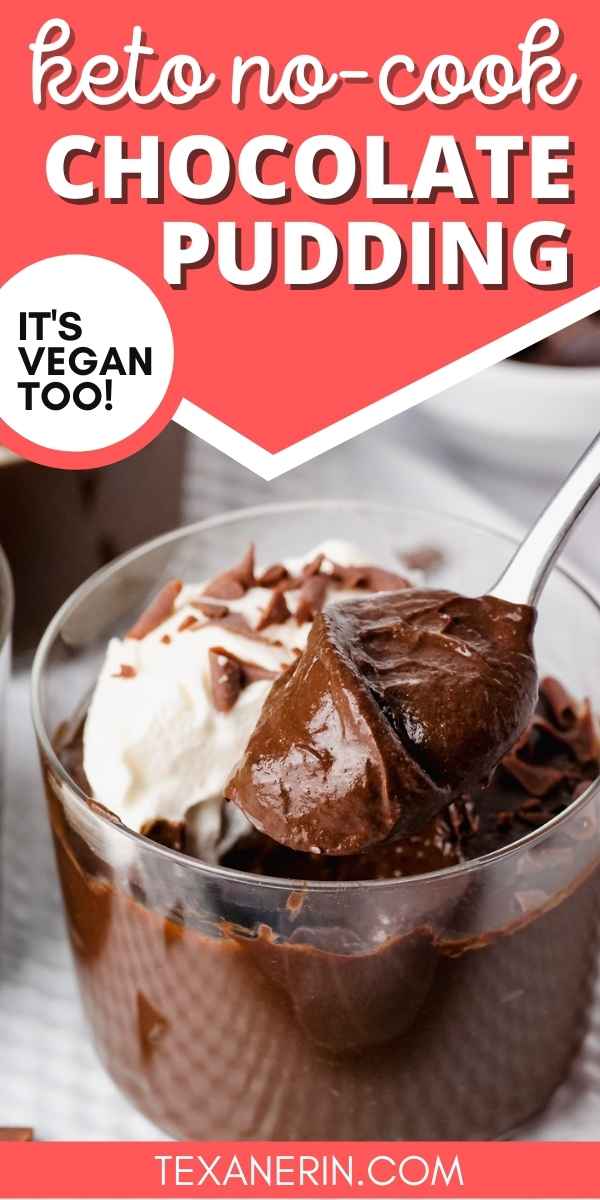 Questions about this keto pudding? 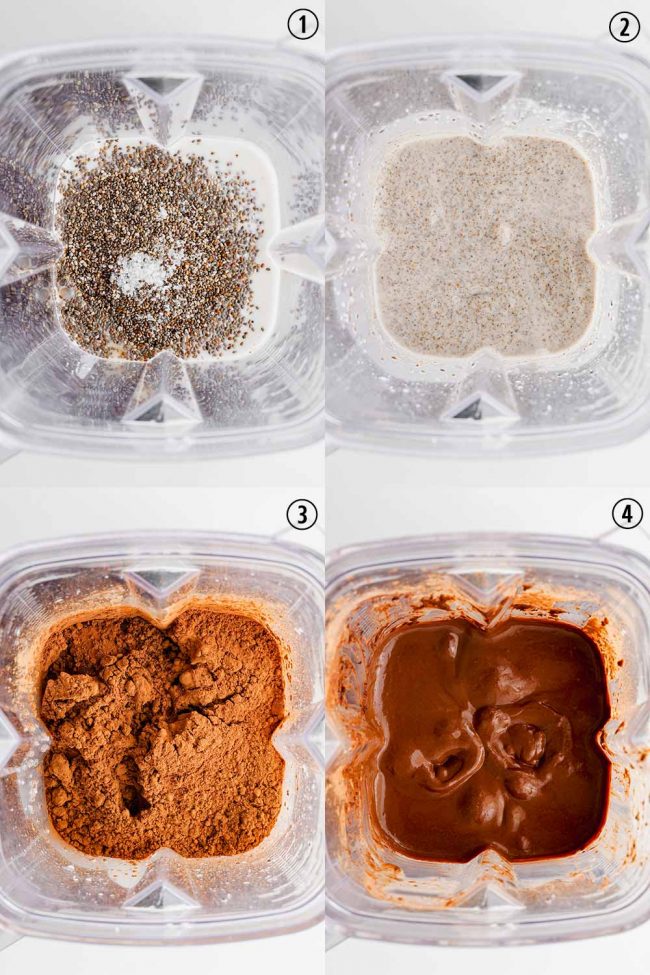 If you give this recipe a try, I’d sure love to hear how you like it! I don’t get much feedback on my keto recipes, so I’d really appreciate it. 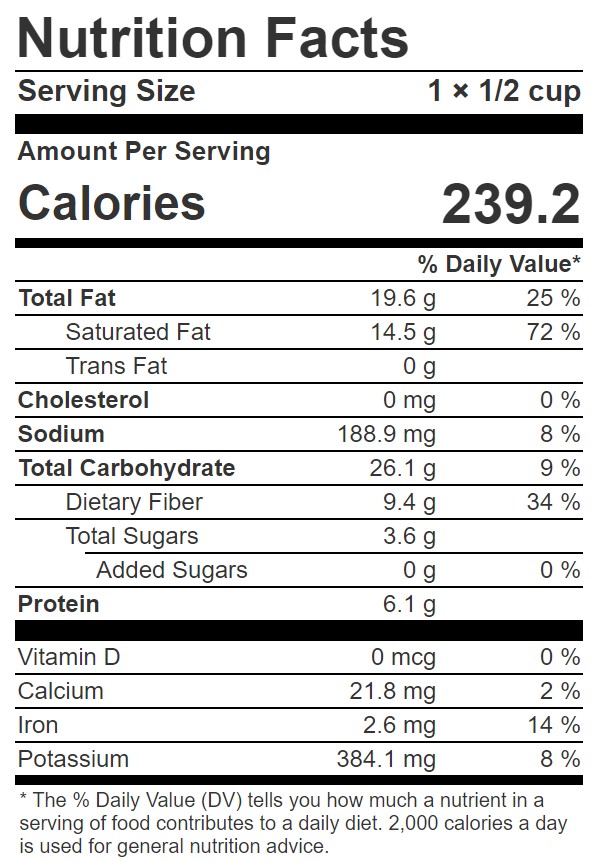