These keto peanut butter cups are easy to make, require just a few ingredients and can also be made paleo with maple syrup and cashew butter or sunflower seed butter. Only 4 net carbs per peanut butter cup!

First of all, if you don’t want to make these keto or paleo, you don’t have to! Just use regular chocolate and powdered sugar in place of the keto sweetener.

For me, there’s no Halloween without Reese’s peanut butter cups. They were always the first things to go post trick-or-treating!

Due to their ingredients, I haven’t been able to eat them for years. I’m guessing it’s the same for a lot of you reading this.

Homemade peanut butter cups aren’t the quickest candy to make but they’re worth it! And they’re still way quicker to make than a cake or cookies.

They’re just slower than other no-bake recipes like my paleo fudge or vegan fudge, where you just mix everything in a bowl or pot and pour it in a pan.

If you want something slightly quicker, you can try these healthy peanut butter balls, using the same amount of the xylitol, erythritol, stevia blend I list in this recipe instead of maple syrup.

Making these peanut butter cups together with your kids would make for a fun Halloween activity. What are you all planning to do at home for Halloween? So far, I have nothing planned. I’d love ideas! 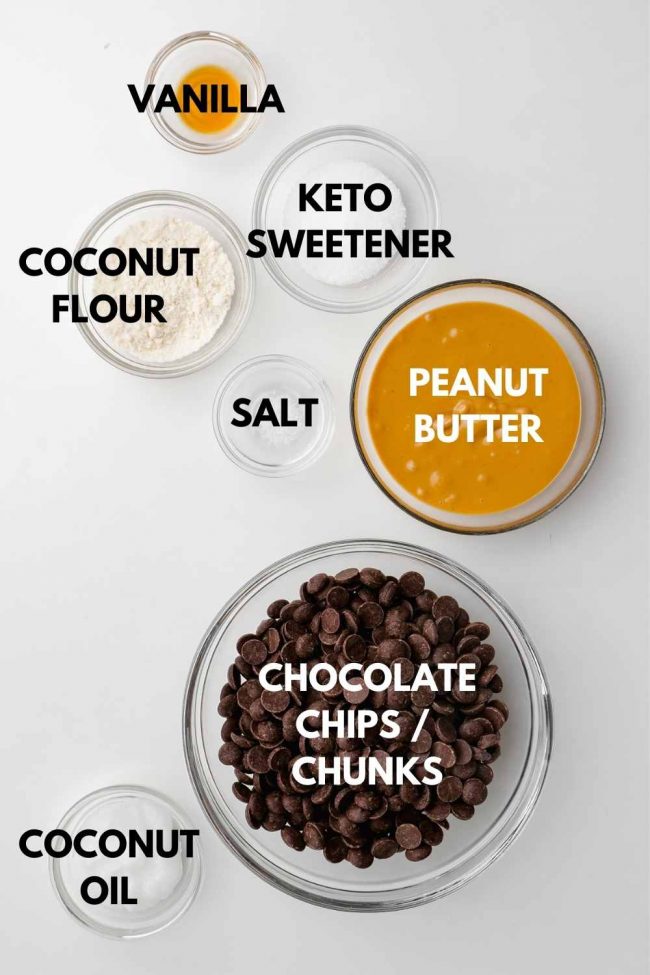 I thought these cups would be kind of grainy with the granulated keto sweetener but they weren’t. There’s a little crunch but not much.

They’re also fine at room temperature. They don’t melt, but of course, if you’re out in the heat, they might get a little melty. Just like any chocolate product would.

If you store them in the freezer, they’re just a bit too hard to eat. So let them sit for 5-10 minutes first.

I think they’re best at room temperature and I think they’d be fine like that for up to about a week. Unless you use a nut butter that goes bad more quickly than most, like walnut butter. 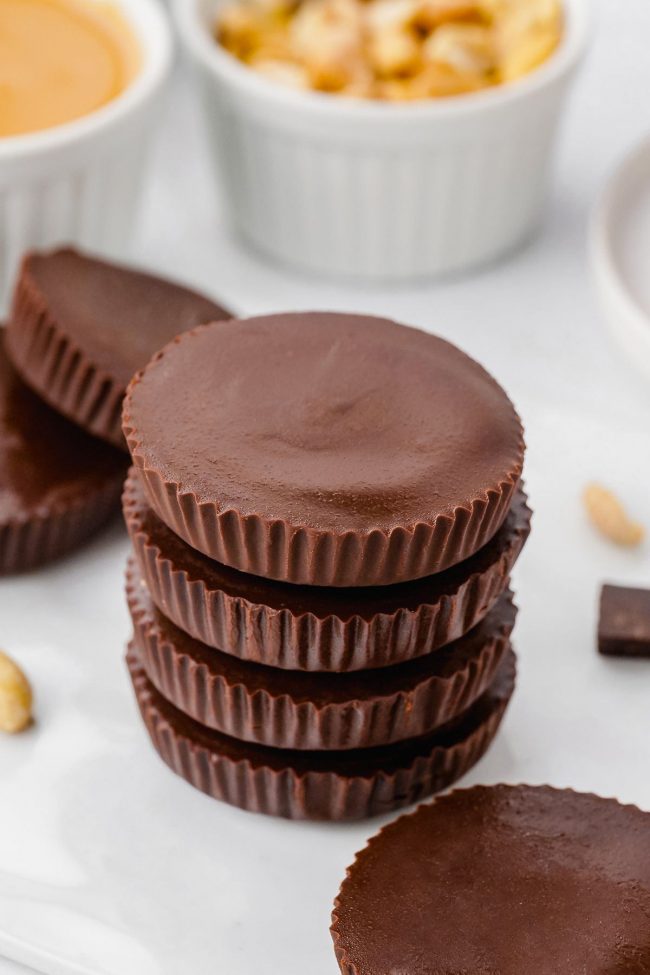 I used the same keto sweetener blend that I used in my keto macaroons and these almond flour chocolate chip cookies.

I’m really not a fan of keto sweeteners. I usually hate the taste and my stomach doesn’t like them, either. But I do fine with this mix and I certainly don’t hate the taste.

It’s not as delicious as coconut sugar or maple syrup but if you can’t have them, this is a great alternative!

I highly recommend using a scale for baking (or making candy) but if you don’t have one, you can use measuring spoons.

They’re some crazy amounts, though.

I use measurements like this all the time when recipe testing as I usually make fourth batches. I am a fractions wizard. 😂 So I’m used to these odd measurements.

But I know a lot of people will find them ridiculous. If that’s you, get a scale for the next time you want to make these. ;) 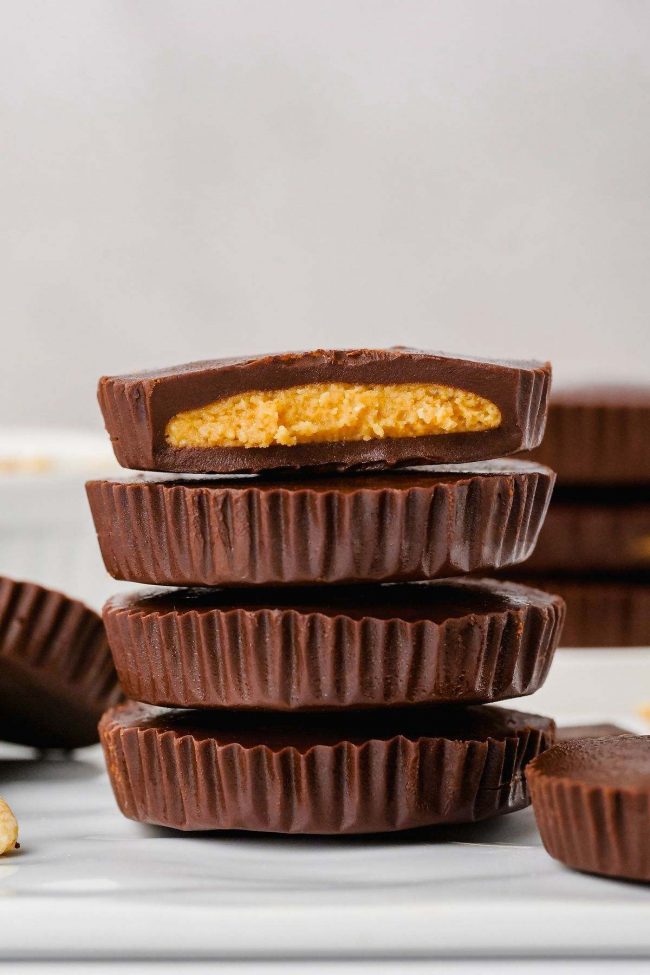 You need to add 50% more flour if making the sunflower seed version. So 3 tablespoons of coconut flour instead of 2.

Cashew butter is the least runny of all nut butters. At least the cashew butter I make and buy is. So you might only need 2 tablespoons of flour if using maple syrup.

These are all just guesses, so you’ll have to experiment. The good thing is that it doesn’t need to be super exact.

We’re not baking anything so it really doesn’t matter that much if you add too much or too little flour.

However, you definitely don’t want to add too much and have your filling be super chewy.

For the paleo version, I prefer the taste and texture of maple syrup but you can also use coconut sugar. It doesn’t dissolve and adds a bit of a crunch.

I personally don’t like the crunch but if you want to use that instead of maple syrup, then you’ll likely not need any extra flour. Except maybe a little, if using sunflower seed butter.

Use 1/2 cup of coconut sugar instead of the keto sweetener. 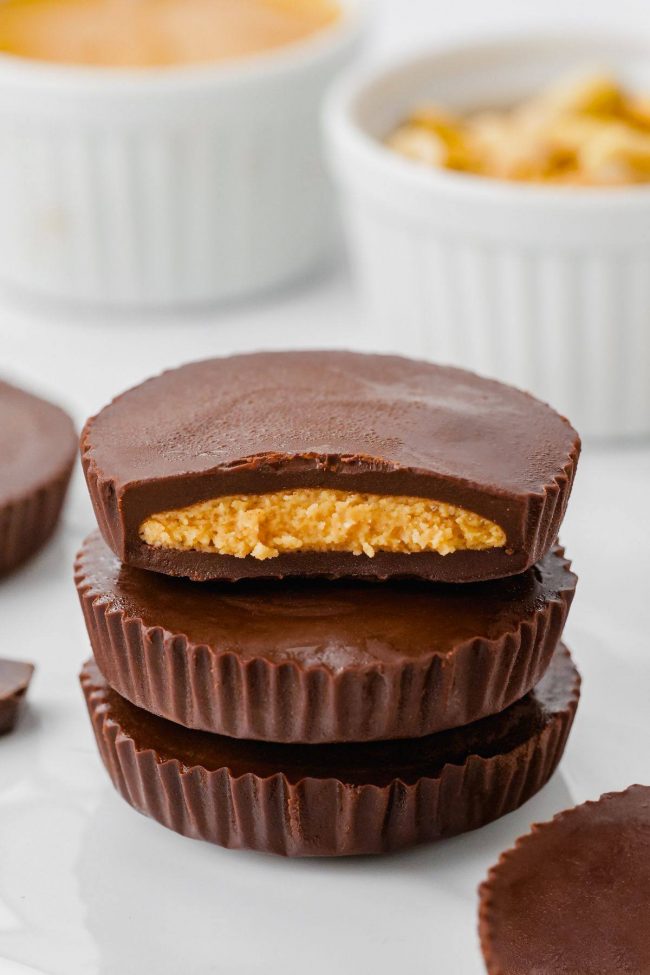 I’m sure you could use a mini muffin pan but that would hugely increase your prep time. I’m also not sure on the amounts of chocolate + filling you’d need.

And if you want to decrease your prep time, check out my paleo peanut butter bars. To make them keto, use 6 tablespoons of the keto sweetener mix instead of maple syrup and make sure to use keto chocolate.

Use whatever kind you’d like. I’ve tested them all.

Straight from the freezer and fridge, each of these liners came straight off without issue.

At room temperature, as long as it’s not especially warm in your kitchen, it also shouldn’t be an issue. If it is, just pop them all in the fridge for 10 minutes. 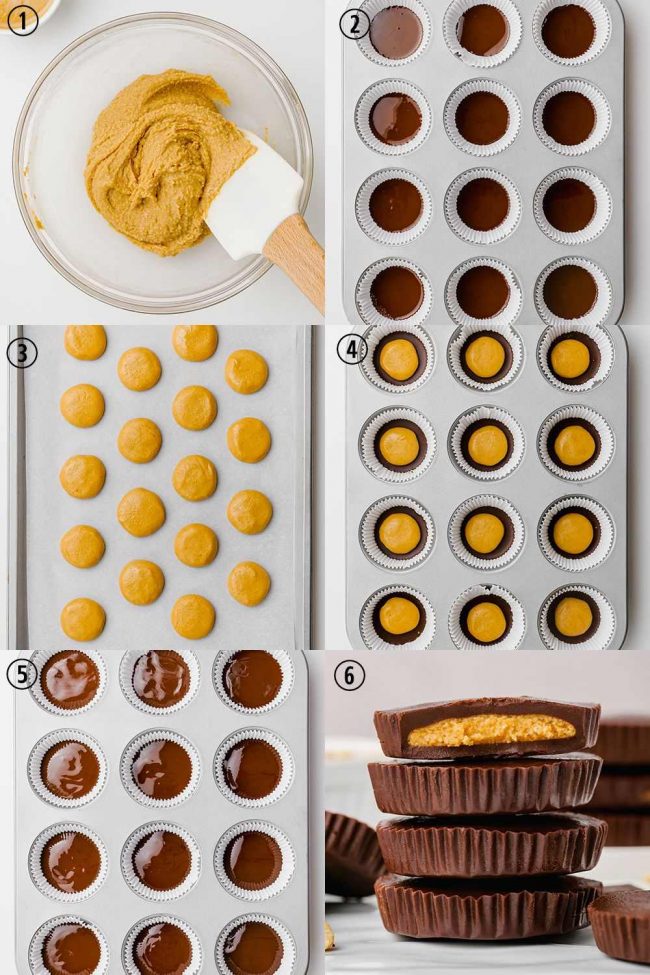 I posted these keto macaroons last month because people have been asking for keto recipes for years. Now that I’ve finally posted one, I haven’t gotten any feedback on the recipe. So if you want more keto recipes, can you please give me feedback if you try the recipes? I would really appreciate it!

I much prefer non-keto sweeteners so I’ll just go back to my usual business otherwise. :) 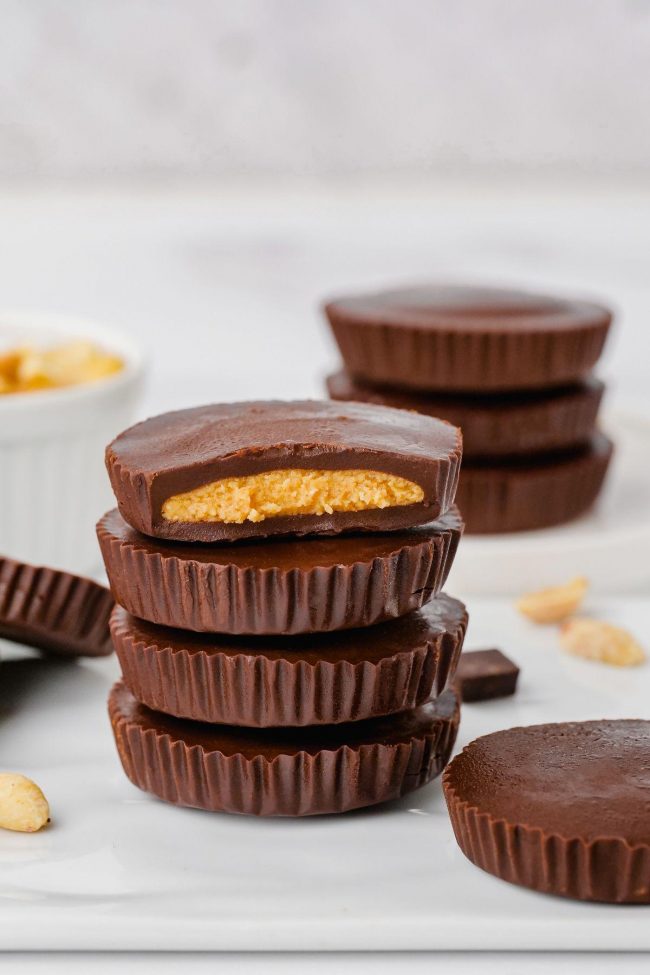 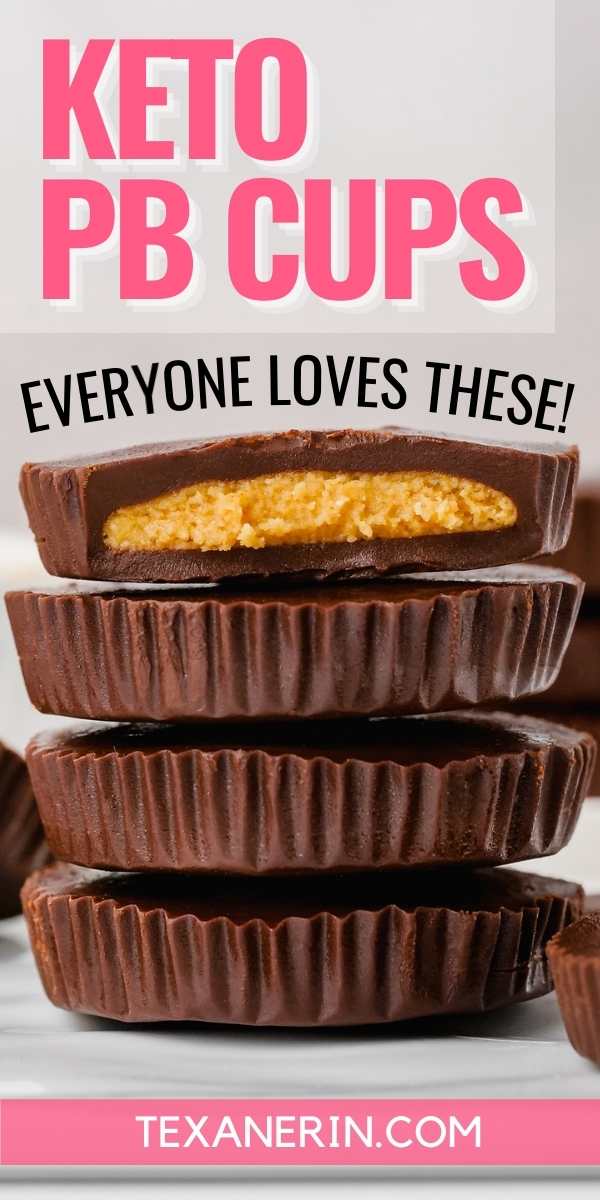 See the notes below for the paleo version!

For the peanut butter layer: 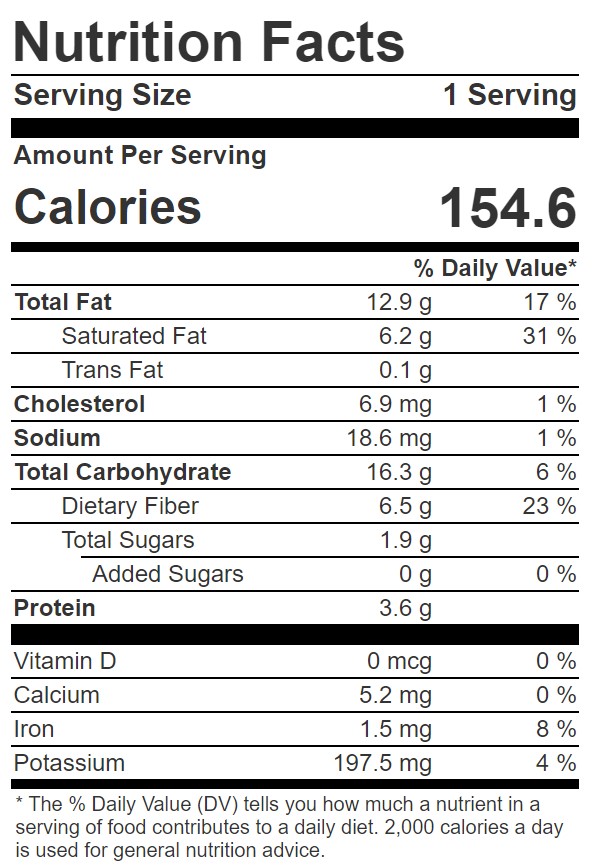