These paleo peanut butter balls actually use sunflower seed butter in place of peanut butter, but they taste really similar. They’re easy to make and great for holiday parties as they don’t melt at room temperature the way a lot of paleo treats do. They’re also no-bake, gluten-free and vegan.

I’m still working on the paleo version of the second almond paste cookie recipe I said I’d post soon, so here’s a different paleo treat that should keep your cravings satisfied for the next few days. :)

The only difference between this and the peanut butter version is that sunflower seed butter is used and the amount of coconut flour that is used.

The peanut butter balls I posted last year, that actually use peanut butter (and which video you see in this post as the process is 100% the same), have been getting great reviews, and I think this nut-free and paleo version is just as delicious! Mr. T actually even preferred this version, and he loves peanut butter.

“Peanuts are not paleo!”

At the risk of getting yelled at for calling these paleo peanut butter balls, I’m doing it anyway because it’s the best description. I thought about paleo cookie dough bites, but they’re not really cookie dough-like. They’re like peanut butter cup filling, but softer.

Sunflower seed butter balls would be most accurate and descriptive but to be honest, nobody is searching for that on Google, and I want people to find this recipe. If you eat paleo, this is as close to peanut butter balls you’re going to get, so why not?

For another paleo dessert that uses sunflower seed butter in place of peanut butter, try these paleo peanut butter cookies! 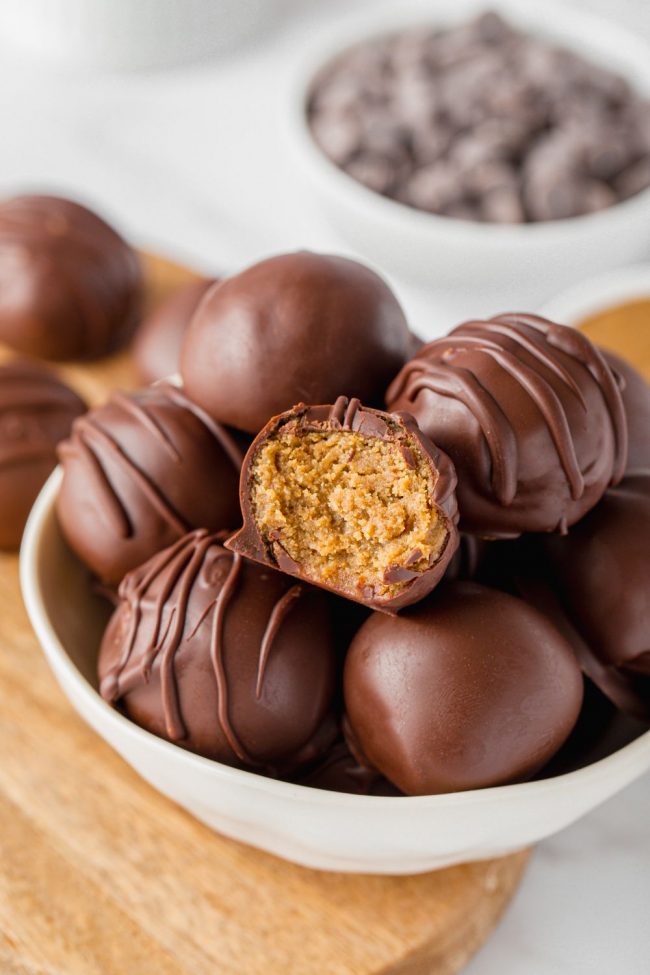 I tried Lakanto Maple Flavored Syrup in these, and we thought that they were awful. I really don’t recommend trying that. I just reread the comments on the peanut butter balls, and a reviewer also said that they were awful with that brand of sugar-free “maple syrup.”

You could try honey if you don’t mind a strong honey taste and / or if you don’t need them to be vegan. If you use honey, you’ll likely need a little less coconut flour.

For a keto version, I’m not sure. I do have these keto peanut butter cups. They use the same amount of nut/seed butter and only require 1/4 cup of coconut flour, in comparison to 3/4 cup in today’s recipe.

You could use the sweetener in that recipe (a mix of xylitol, erythritol and powdered stevia), but you’d have to play around with the amount of coconut flour because I have no idea how much you’d need. 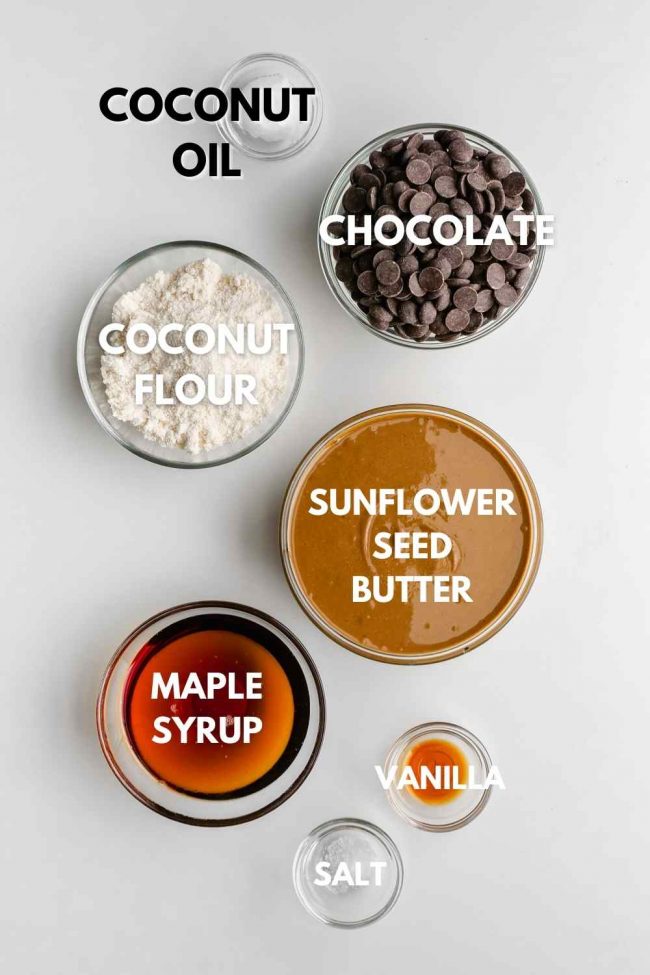 How absorbent coconut flour is, varies from brand to brand. I’ve noticed this in quite a lot of my coconut flour recipes. I’ve made these paleo peanut butter balls multiple times, and the amount I used was slightly different several times, depending on the brand of coconut flour.

If you add too little, it’ll be obvious because you won’t be able to form the dough into balls. But don’t add too much, or the ball will be too chewy. 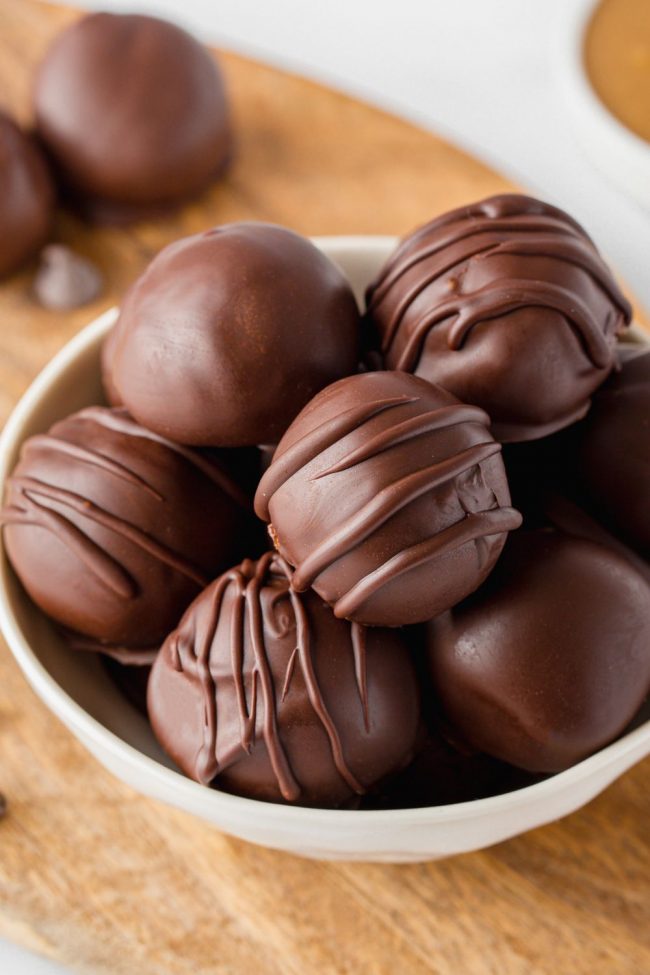 Make sure to use paleo chocolate for this. What I really wanted to do was use a homemade coating of cocoa powder, maple syrup and coconut oil but that was a big melty mess. It wasn’t as delicious and would have been terrible to bring to a holiday party.

For more great holiday party recipes that don’t melt, check out my mint chocolate fudge or the plain vegan fudge. Both are paleo + vegan!

And if you don’t care about whether it melts or not, this paleo fudge is my favorite and unlike the above recipes, is maple-sweetened and uses almond butter for a super delicious treat. 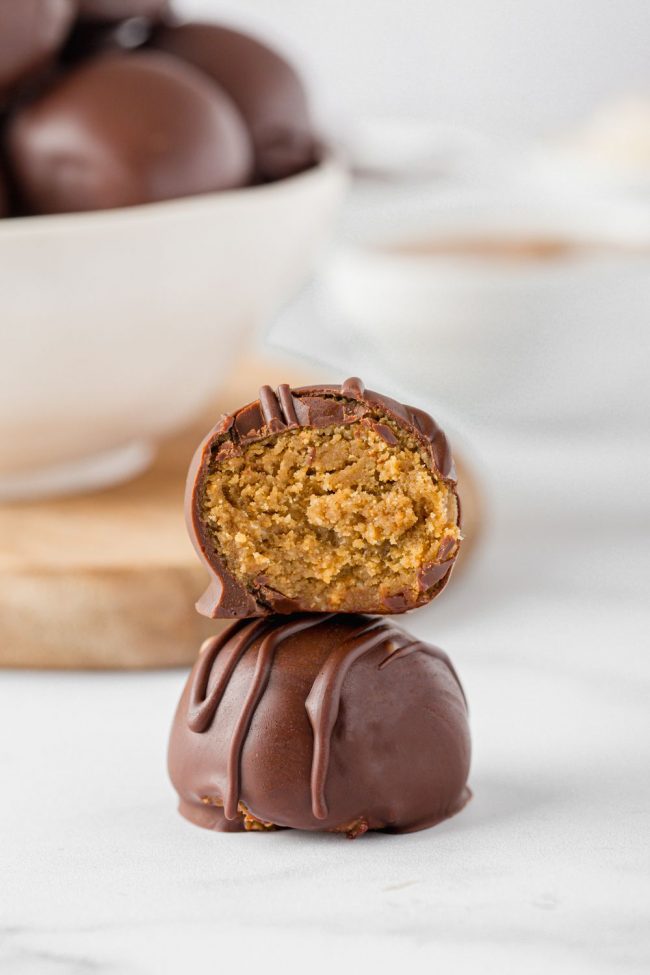 If you try these paleo cookie dough balls, I’d love to hear how they come out! 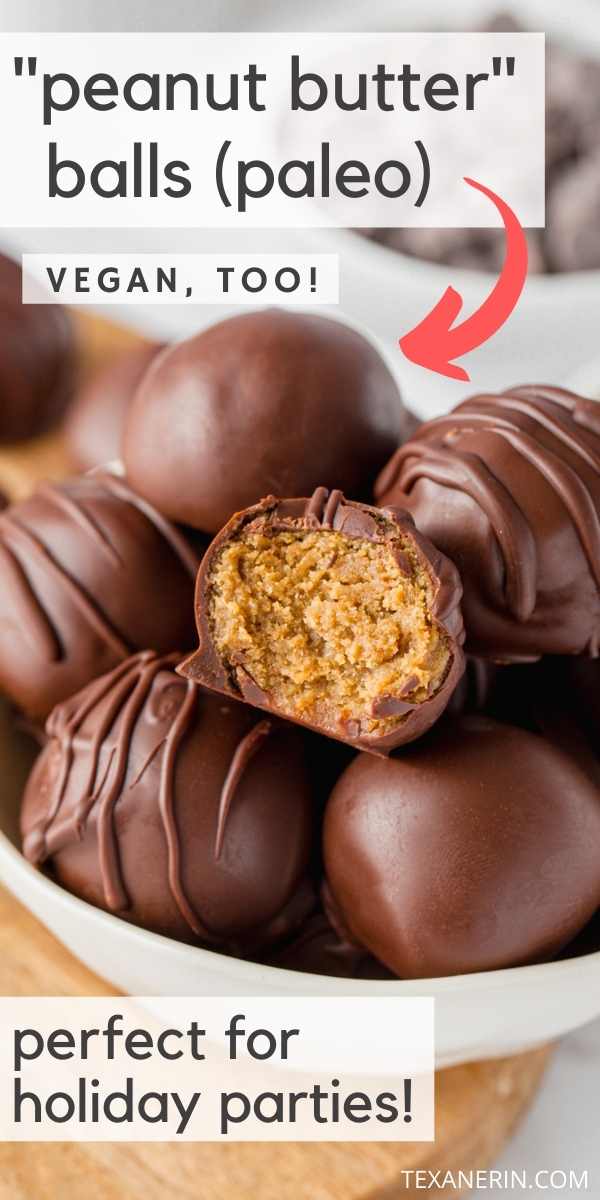