This pumpkin and sweet potato soup is flavored with pumpkin pie spices and is easy to make. You can make a traditional version with regular cream or a vegan, paleo and whole30-friendly version with coconut cream. It also makes a great keto side soup. This recipe includes directions for the stovetop and Instant Pot.

Here’s something you’ve never seen on my blog – a soup recipe! Like I said in my last post, this walnut butter recipe, I’m trying to eat healthier.

I would much rather eat pumpkin desserts all day but… you know. I’m trying to be good.

I’ll be back soon with something full of sugar but until then, we’ve got a healthy, fall soup.

I wanted to make pumpkin and sweet potato soup a while back and was surprised by the lack of recipes with cinnamon. I was looking for something with pumpkin pie spices and not spicy spices or herbs.

So I came up with a recipe using cinnamon, nutmeg, ginger and cloves. It doesn’t have a strong pumpkin pie spice flavor to it, though. After tasting the soup with the recommended amounts, you may want to add more. 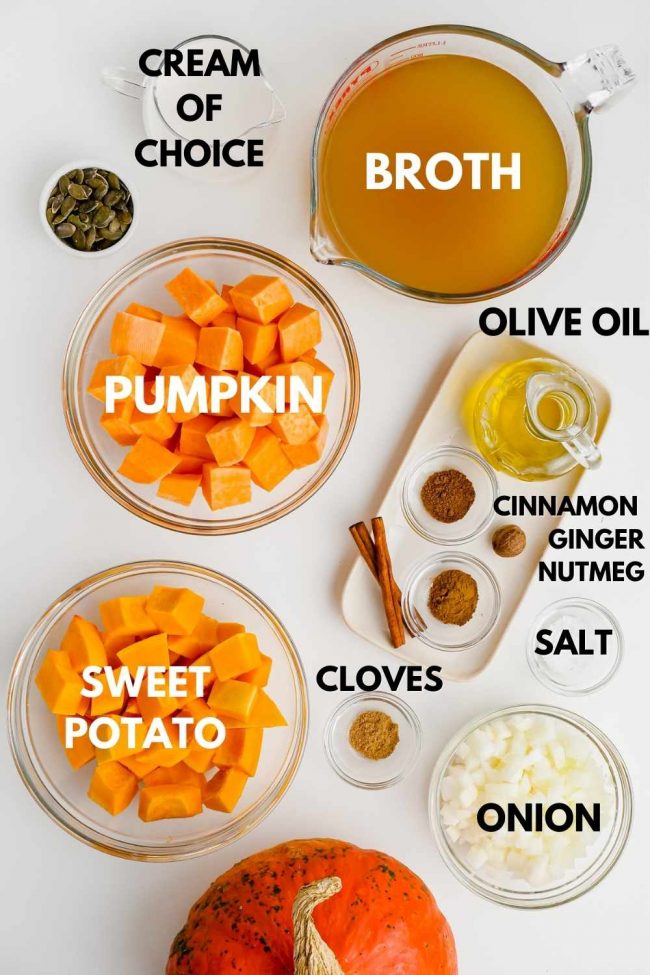 One thing I do to cut down on preparation time is to use frozen sweet potatoes. If we had frozen pumpkin, I’d use that, too!

I don’t find that using frozen sweet potato changes the taste at all. I do think using canned pumpkin would result in a different and perhaps, funny, taste. 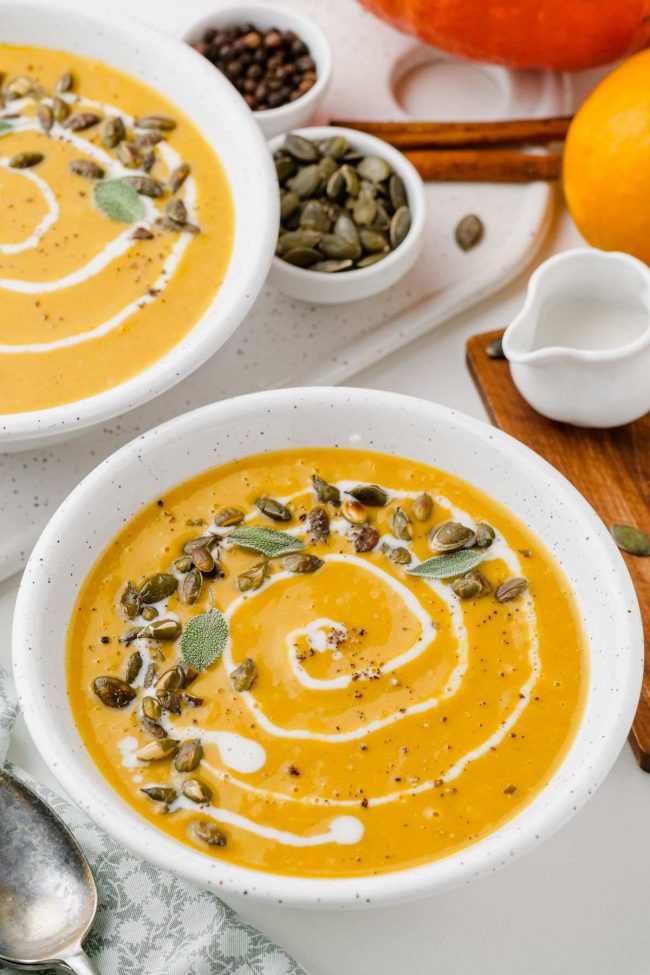 To keep this soup vegan, I used vegetable broth but it’s great with chicken broth. I’ve even used beef broth but then I used 50% broth / 50% water as I didn’t want too strong of a beef taste. By the way, for another paleo / vegan sweet potato recipe, check out these hasselback sweet potatoes.

Note that the soup is much thicker than you see in the video and photos. I accidentally used too much broth. 🤦‍♀️ It should’ve been 3 cups, as the recipe calls for, but I used 4. 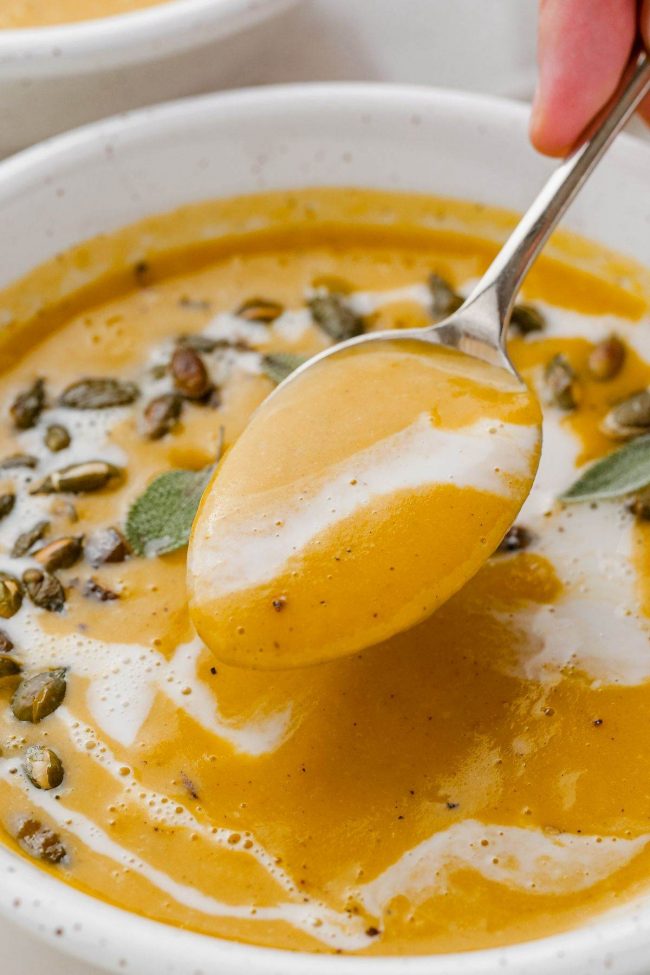 I also used coconut cream instead of whipping or heavy cream to keep this recipe vegan. You can, of course, use regular cream if you prefer.

You surprisingly can’t taste the coconut after adding the coconut cream. All it does is add a bit of richness. But it’s much needed.

Without it, it just doesn’t taste right. It’s quite boring and bla without it.

I have no idea how a little cream can transform a dish so much. You may want to add even more! 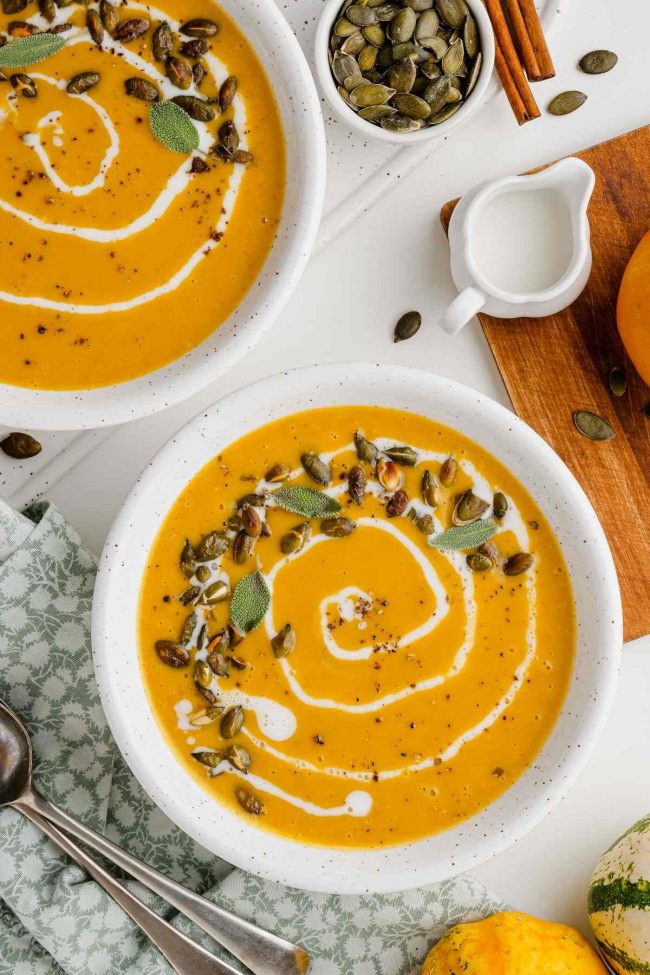 What type of pumpkin to use in this soup

I really think you can use any type of pumpkin that you’d typically eat. So not a jack-o-lantern. And not the little decorative pumpkins.

If you want something more concrete, try one of these: 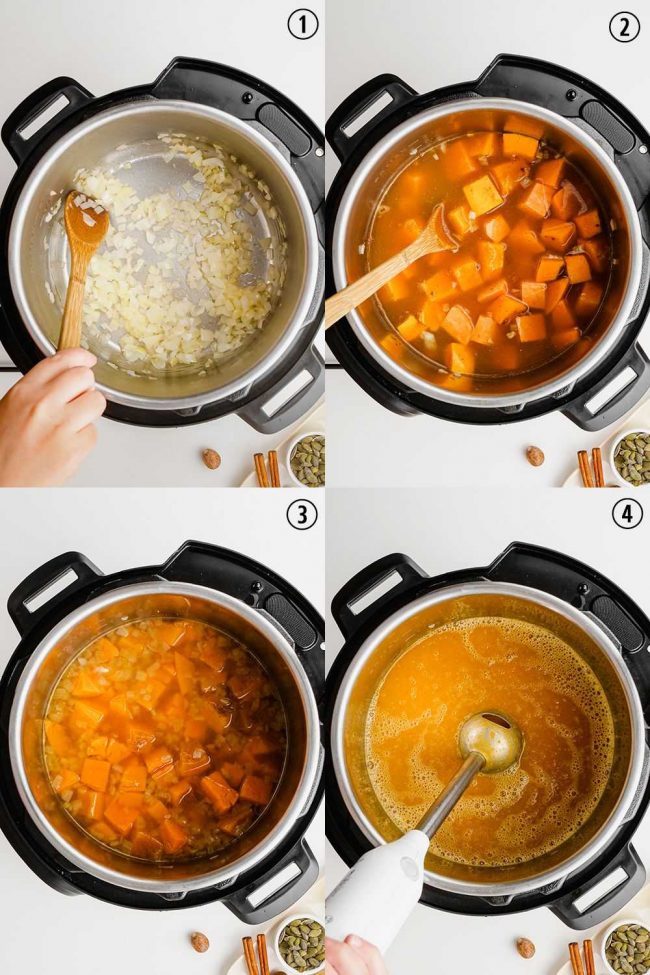 What to serve with this sweet potato pumpkin soup

I topped mine off with roasted pumpkin seeds. The sage was just for color.

As for what to serve along with it, I’d recommend some crusty bread for some contrast to the smooth soup. A baguette or a crusty artisan bread would be great.

This pear and walnut salad also sounds nice. If you want something more hearty, we love these smashed potatoes alongside anything.

Not into sweet potatoes? Try this Instant Pot Potato Soup!

A great keto side dish

Pumpkin and sweet potatoes aren’t exactly low-carb. But this soup, eaten as a side dish, is keto.

The label was calculated using coconut cream (not dairy cream) and doesn’t include pumpkin seeds. 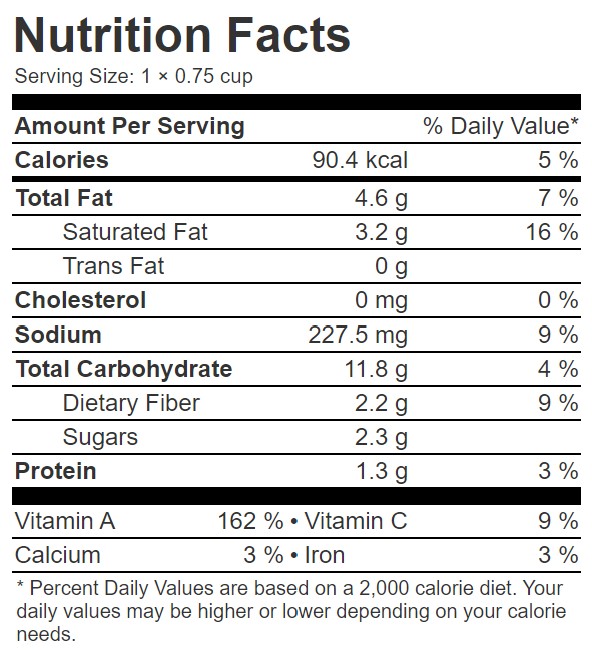 If you try out this pumpkin sweet potato soup, I’d love to hear what you think! And for another comforting soup recipe, check out this minestrone soup.

To top the soup:

If using an Instant Pot:

If making this on the stovetop:

4 comments on “Pumpkin and Sweet Potato Soup (lots of fall flavor!)” — Add one!