This white Nutella, or white chocolate hazelnut spread, is a delicious twist on regular Nutella! It can be made traditionally with white chocolate or for a paleo and vegan version, with cocoa butter and maple syrup.

White chocolate and hazelnut is a sublime combination, so here’s a relatively quick and fun recipe that you can make to give out as gifts!

Or to simply eat with a spoon. Whatever you prefer. :) 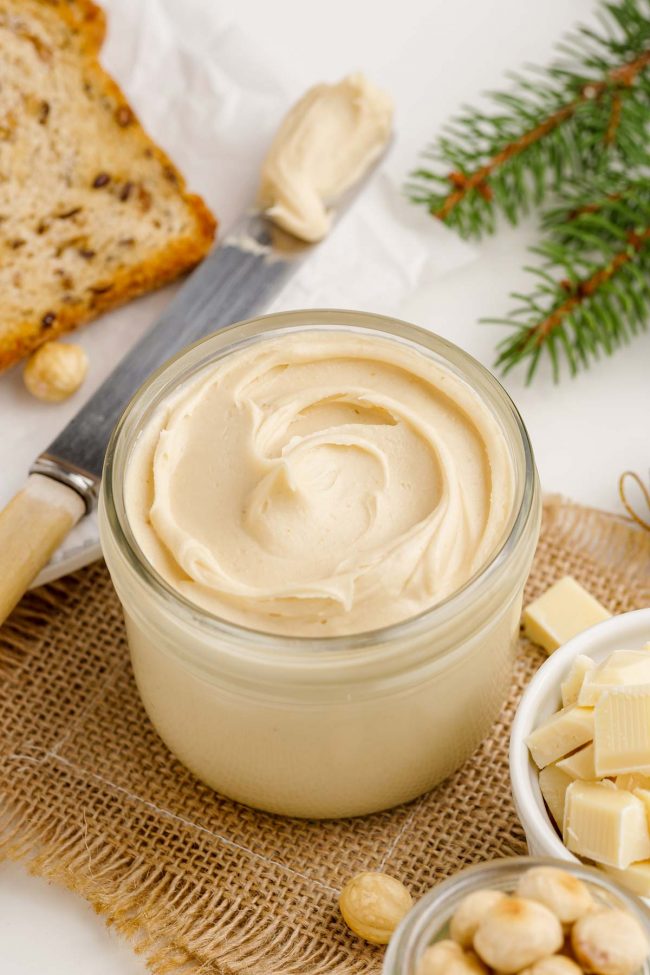 It’s a bit confusing. A jar of white Nutella was posted on the internet, and people went crazy trying to get their hands on it.

Turns out it was not an official Nutella product but a homemade creation. It was all a big misunderstanding.

One website currently says that you can buy it in Italy, but my assistant lives in Italy, researched it and said this isn’t true. It’s never existed.

That website also says a few Australian shops import the Italian stuff. Which is also not true because there is no Italian white Nutella. 😆

As of 2022, there has not been any news or previews of launching a white chocolate version by the Nutella maker Ferrero.

But that’s not to say it doesn’t exist (if only in our dreams) because you can now make your own. 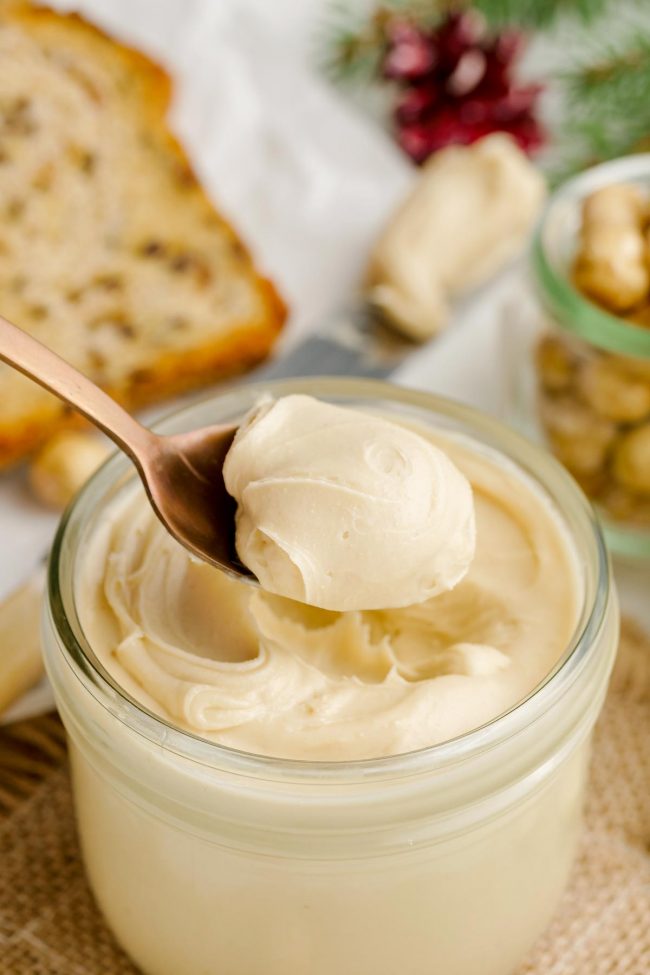 Nocciolata Bianca by Rigoni di Asiago is a white chocolate hazelnut spread that is made with 30% hazelnuts. The ingredients are:

It has less sugar than the average hazelnut spread, and it’s 100% organic, with no palm oil (something Nutella can’t claim), and is gluten-free.

I can’t have some of the ingredients nowadays, but I’ve had it in the past and loved it.

Everything that Rigoni di Asiago makes is packed with flavor, by the way. It’s the only jam we buy. The ingredients are fruit, fruit sweetener from apple juice concentrate and pectin.

The only downside is that it goes bad more quickly than regular jam, but that’s to be expected with the lack of sugar and preservatives. 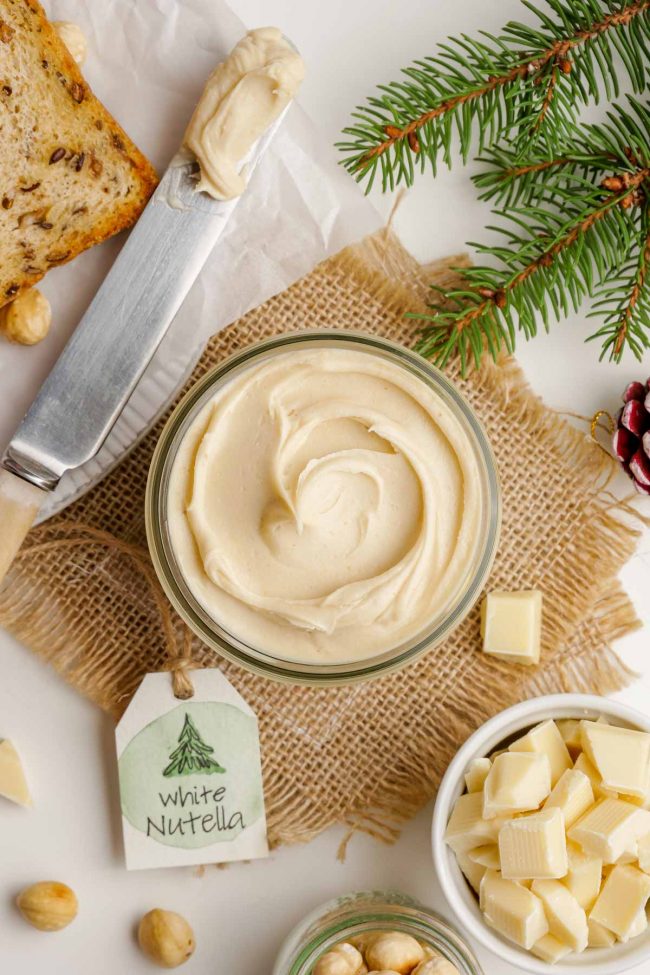 Since I can’t have some of the ingredients in Nocciolata, I made my own version.

You need a food processor to break down the hazelnuts. If you don’t have one, store-bought hazelnut butter works.

But you would have to buy blanched hazelnut butter. I don’t think I’ve ever actually seen that. 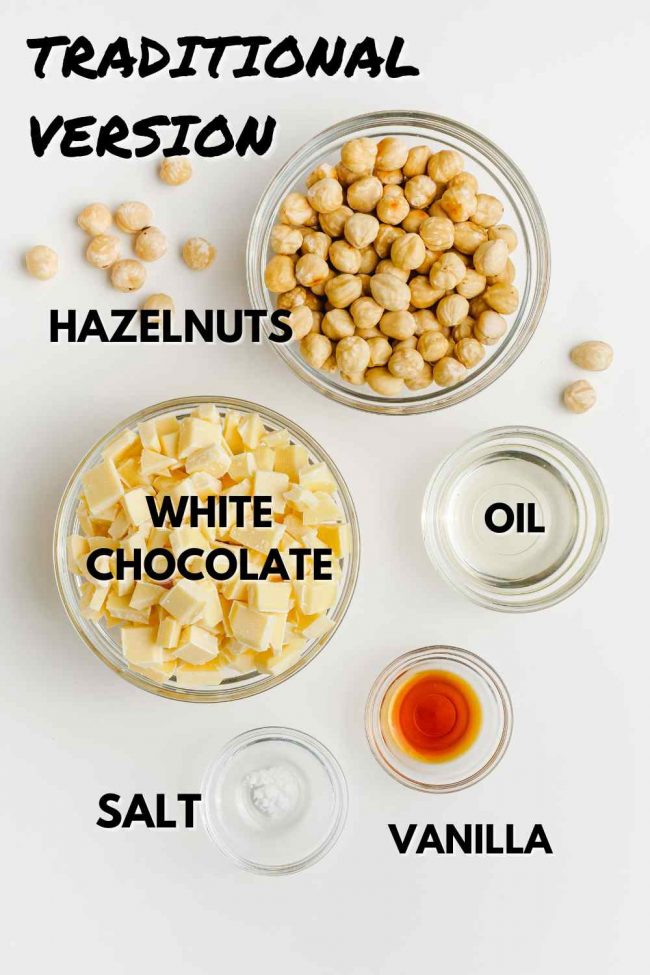 Regular hazelnut butter, which is made from unblanched hazelnuts, would also work, but the flavor from the skins might interfere with the flavor of the white chocolate.

And your white chocolate hazelnut spread wouldn’t be as light in color and would have lots of brown specks in it.

If using pre-made nut butter, you would simply mix the melted white chocolate, hazelnut butter, and all the other ingredients until creamy. No need for a food processor. 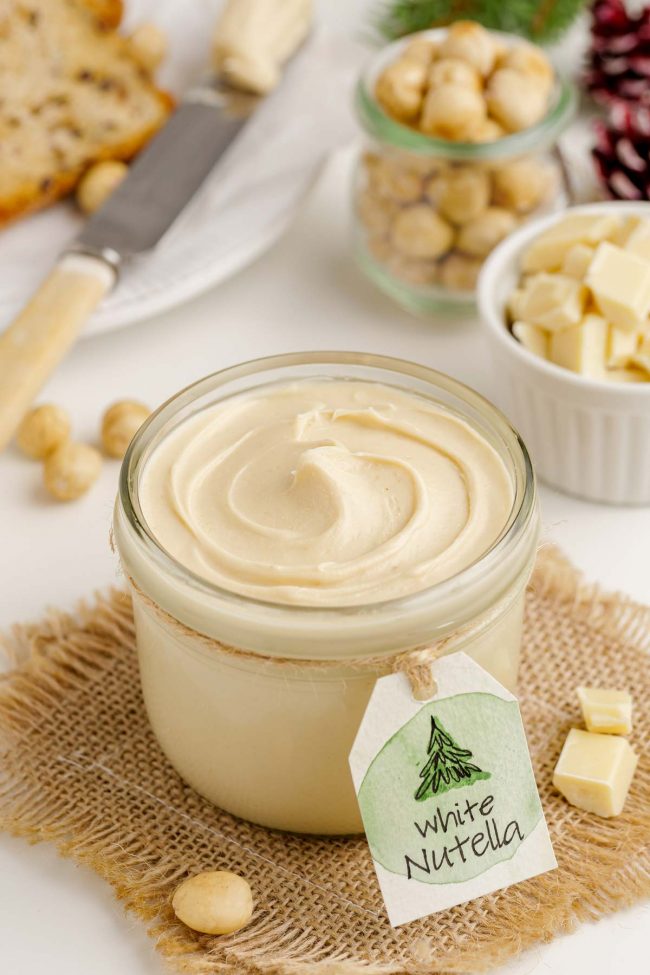 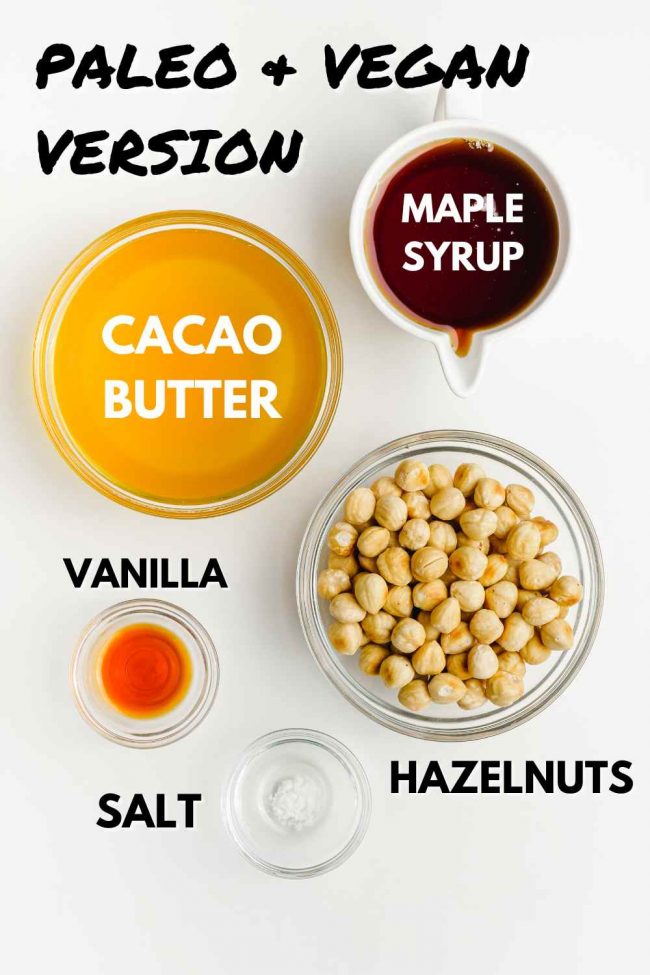 Note: the following 3 photos of are the paleo/vegan version, but all the others in this post are of the traditional version.

So my vegan version uses cocoa butter and maple syrup instead of white chocolate.

Cocoa butter is also an expensive ingredient, but at least cocoa butter + maple syrup is healthier than white chocolate. 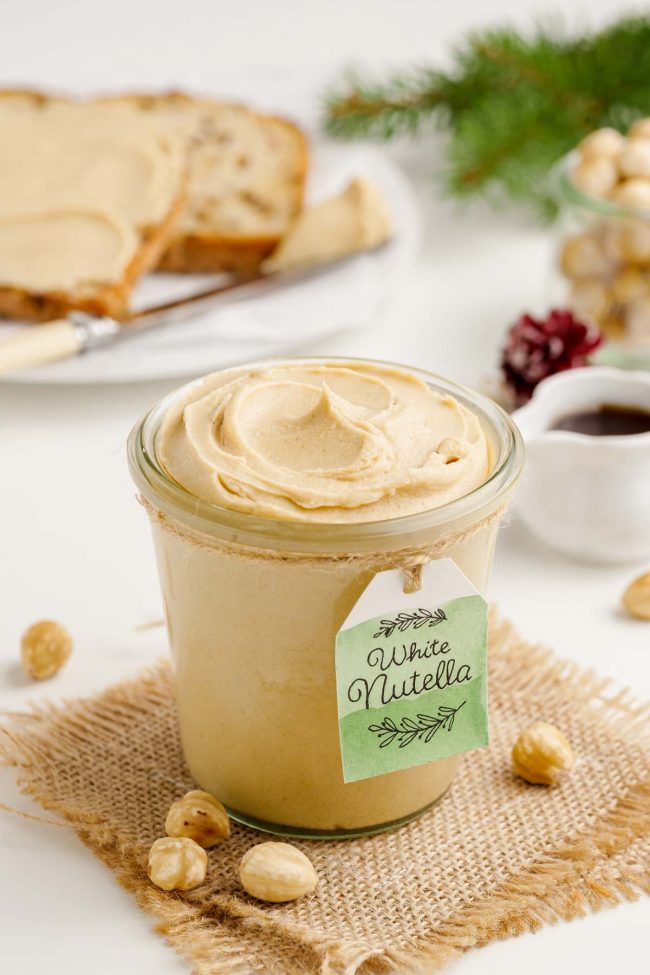 On the other hand, the texture is softer with white chocolate. So both versions have their advantages!

I don’t think the paleo/vegan version is as tasty as the traditional version. Or rather, I should say that it tastes different in that it’s not as white chocolaty. 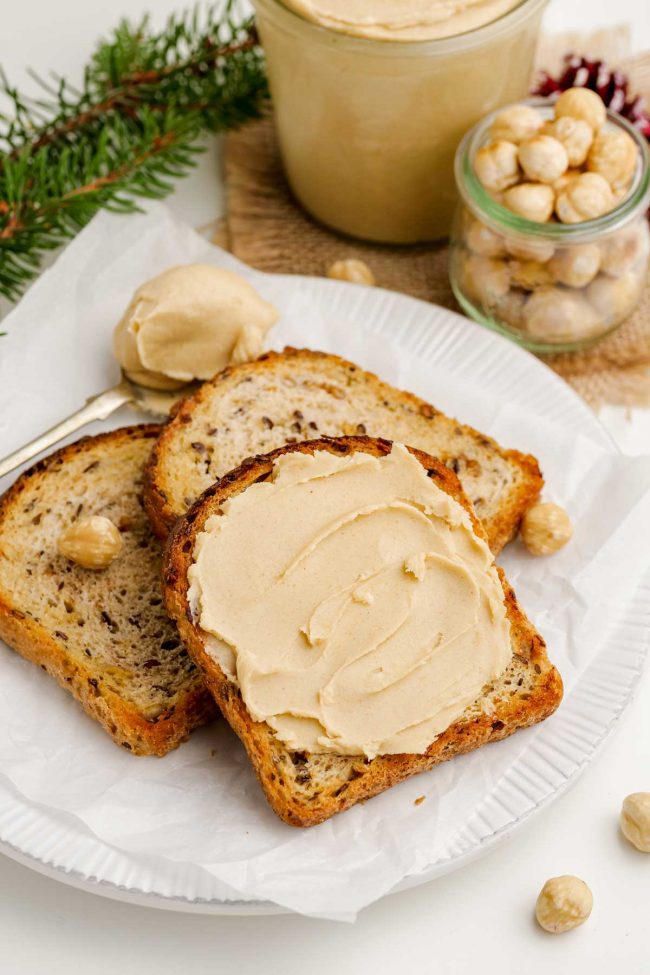 I’ve also made the paleo/vegan version using hazelnut butter instead of hazelnuts. If doing that, you can melt the cocoa butter and then stir in the nut butter and the other ingredients.

Keep in mind with the paleo/vegan version, you have to stir it occasionally while cooling to ensure that it sets correctly. I find my Chocolate Almond Butter way easier to make, and it only calls for 4 ingredients.

You could use hazelnut butter in place of the almond butter, but it uses cocoa powder, so it’s a dark brown color. 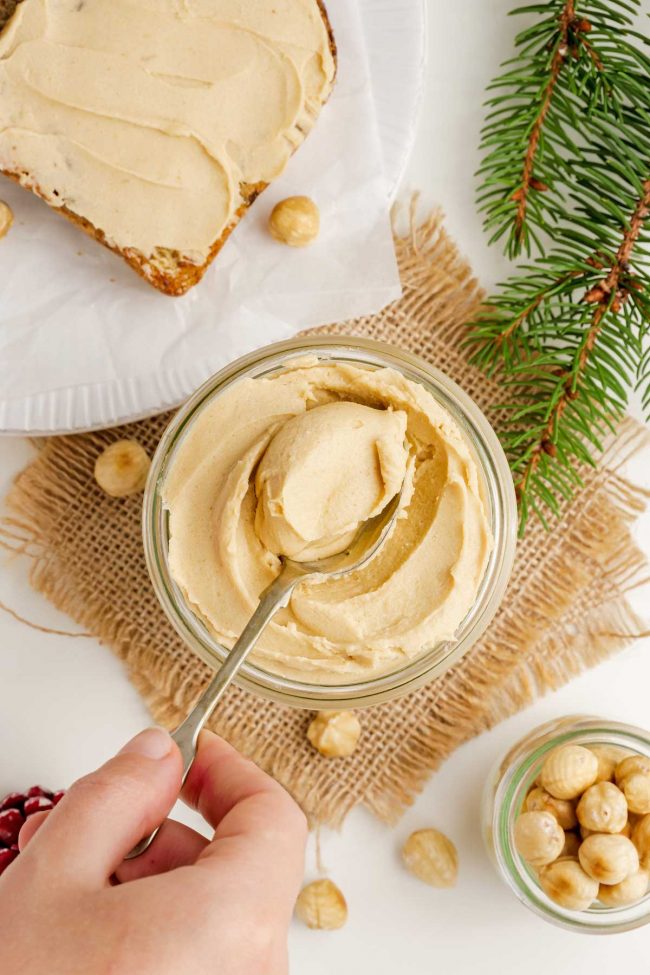 Melt the white chocolate or cocoa butter (for the paleo/vegan version). 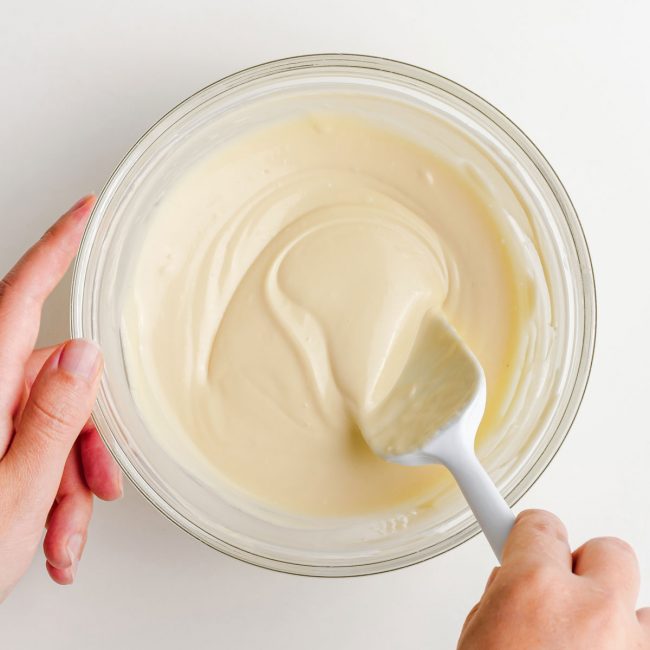 Place the hazelnuts and salt into the bowl of a food processor fitted with an S-blade. 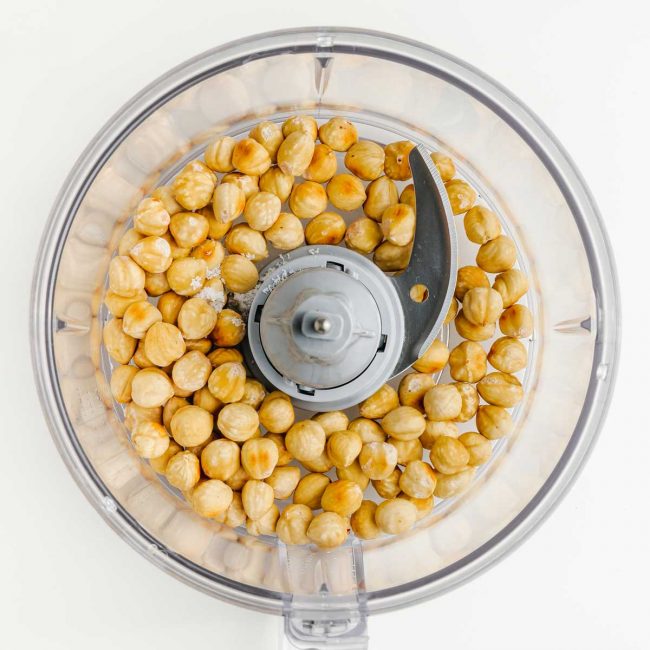 Process until you have something that looks like coarse hazelnut flour. 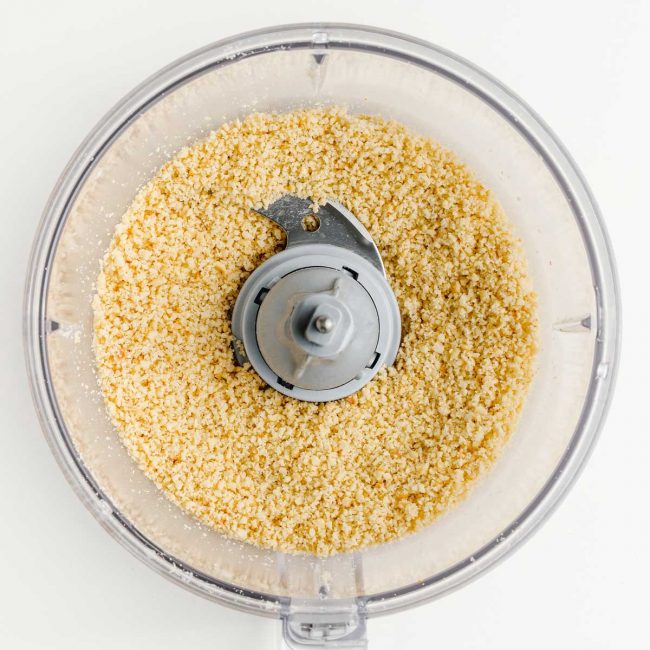 Add the vanilla and oil (if making the traditional version) and process until a paste forms. 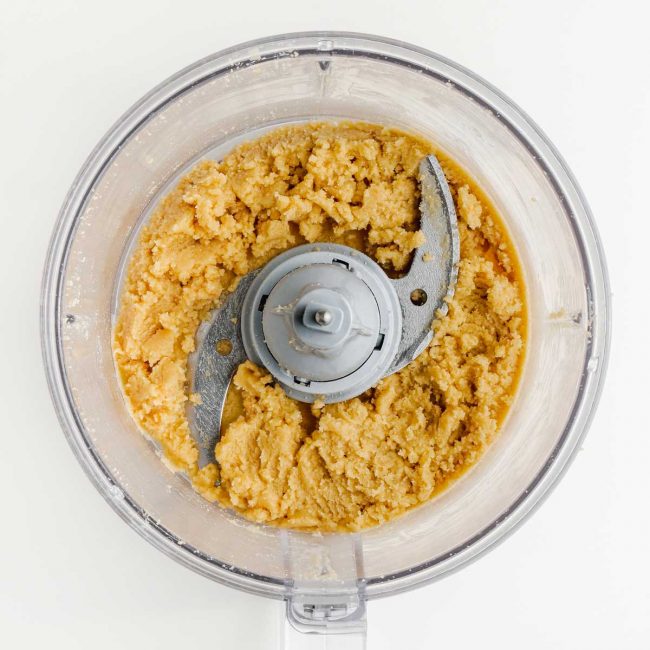 Pour in the still warm white chocolate or cocoa butter + maple syrup for the vegan/paleo version and blend until combined and you have a silky nut butter. It should be very runny and pourable. 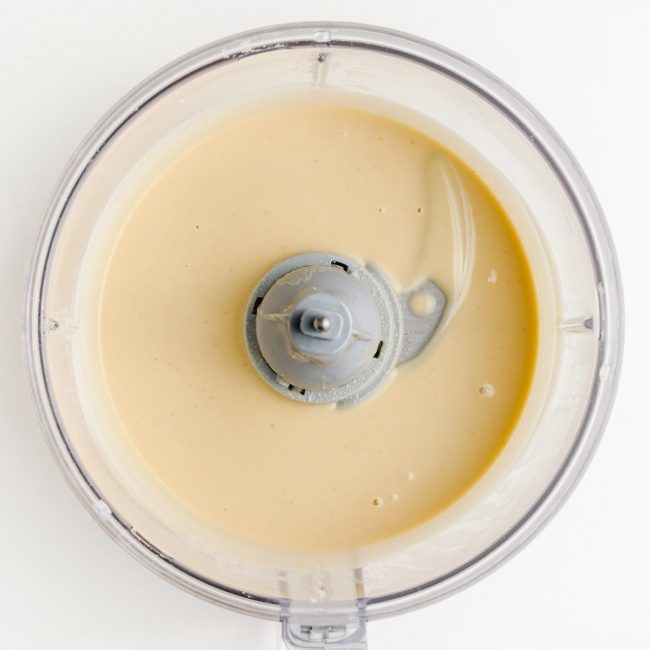 It’ll firm up in a few hours, so don’t worry that it’s too thin. The white chocolate or cocoa butter will solidify and make it spreadable.

Pour into a jar and let it sit for about 6-8 hours or until firmer and not runny.

Keep it at room temperature for up to a week. Longer is probably safe, but I’m erring on the safe side. You can refrigerate it for up to 3 months, but won’t be spreadable when cold.

I recommend keeping small amounts out at room temperature, that you could eat within a week, and keeping the rest refrigerated. 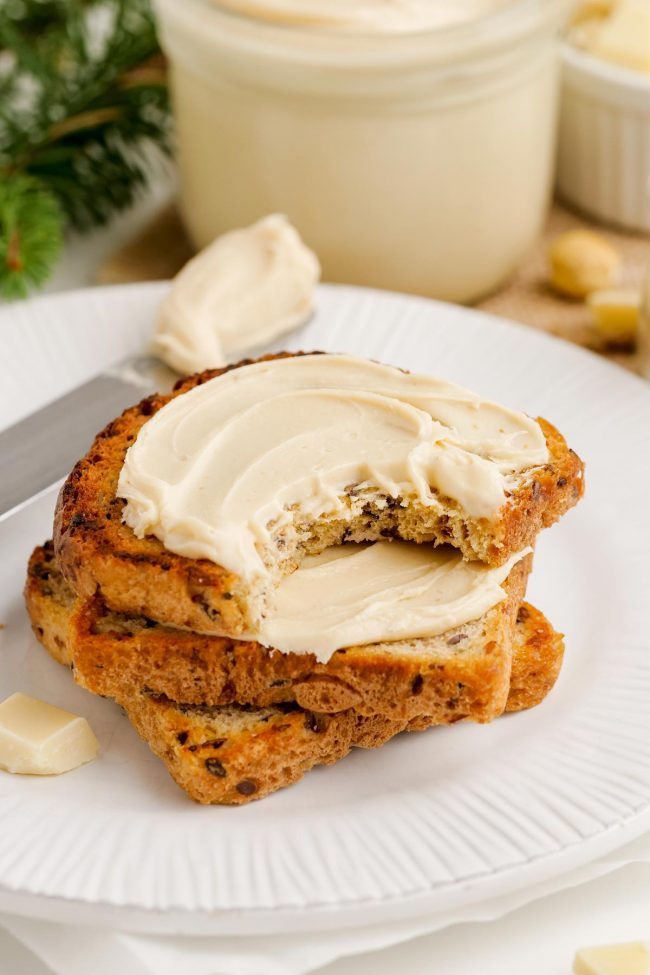 I have some great ideas if you want to treat others with homemade food gifts. Not only are they terrific, but they’re also healthier than most holiday sweets!

If you try this white Nutella recipe, I’d love to hear about it! Please leave a comment or snap a pic and tag #texanerin, so I can be sure to see it. Thank you. :)