These gluten-free mummy hand pies are super simple to make, don’t require any special ingredients, and are fun to make with the kids! They have a vegan option, and if you’re not gluten-free, you can use any pie crust you’d like.

This is admittedly not much of a recipe (it’s pie crust + jam + a powdered sugar glaze), but I’m always so excited to share non-processed Halloween treats. It’s hard to come up with recipes that don’t use food coloring, edible candy eyes, candy, etc.

You might be thinking – but it’s too early for Halloween recipes!

I agree! However, the choice was to post these Halloween mummies, nothing or another drink. So I went with the mummies.

I’ll have loads of Halloween recipes this year. I neglected Halloween last year because I spent a month planning and preparing for a Halloween party that never happened because my kid was sick two weeks in a row.

So this year, I’ll be sharing the recipes that I made (and then froze and still sometimes come across in the freezer 😂).

These mummy hand pies are not something you want to freeze! Unfortunately, they’re best on the day of preparation. Luckily, they’re very easy to make! 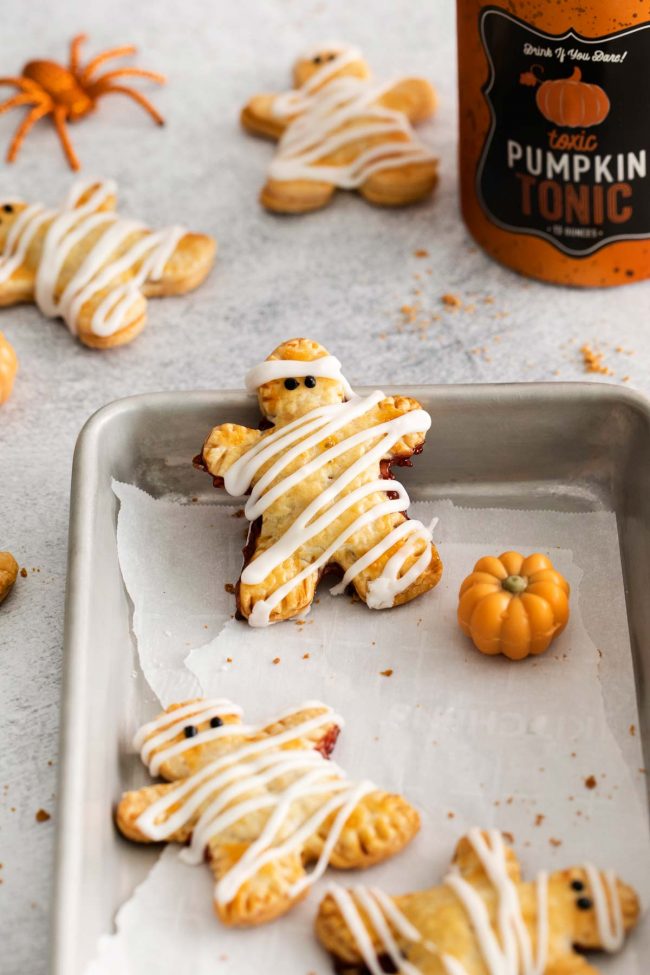 You can use any gluten-free pie crust dough that you’d like that is easy to work with. If you have a homemade crust that you love, but it’s finicky and easily breakable, I definitely wouldn’t use that one.

You should be able to roll it out and easily use cookie cutters to make shapes.

I used Bob’s Red Mill 1-to-1 Gluten-free Baking Flour, and the dough was very easy to work with. I have no idea if other brands would work just as well.

I would recommend using that product or the homemade gluten-free flour blend that Gluten-free Palate recommends for her pie crust recipe. 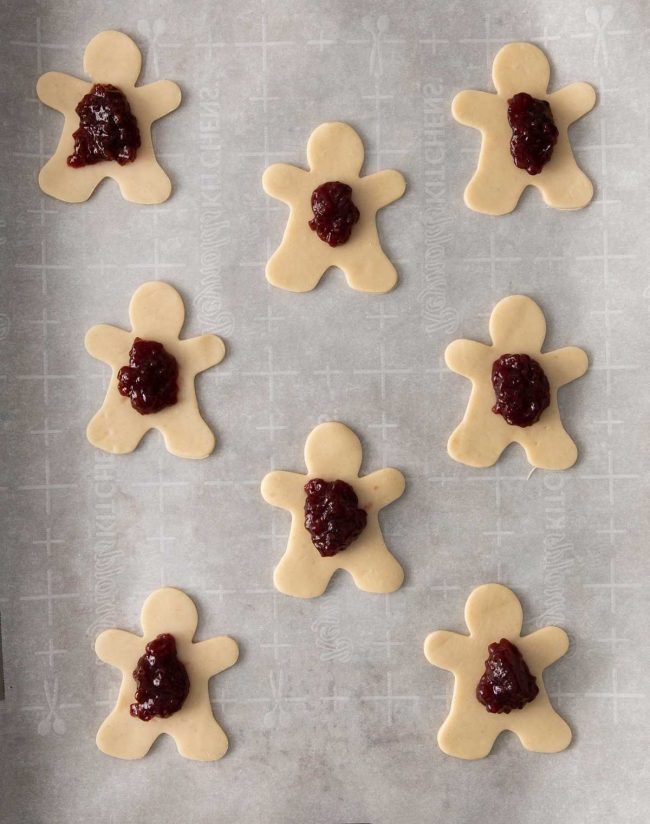 The pie crust recipe calls for butter or shortening. You see the butter version in the photos.

To make a vegan version of these pies, I used Spectrum shortening, and omitted the egg wash.

I used cashew milk instead of egg wash around the edges of the mummies to seal them together, and it worked fine.

Without the egg wash, and also due to the lack of butter, the mummies don’t brown as nicely.

But under the icing, I didn’t find it that big of a deal. I will say that the taste is better with butter versus shortening, but in my opinion, that’s always true.

Vegan butter would likely work in place of normal butter, but without having tried it, I can’t make any guarantees. 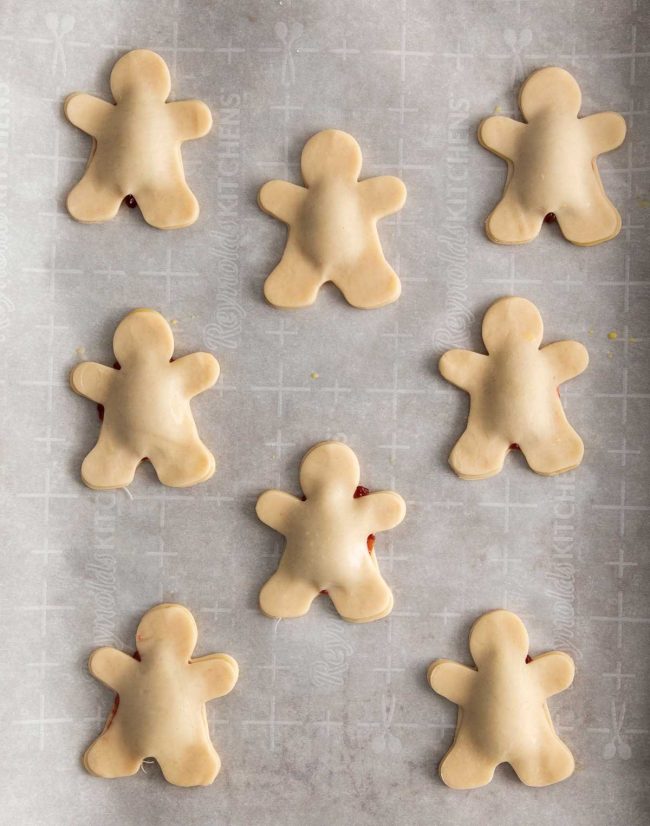 Strawberry jam is what you see in the photos, but raspberry is also fantastic! I think any type of jam would be great.

If you want to make your own, check out this post on How to Make Strawberry Jam. It’s a super simple recipe that is pectin-free, naturally sweetened, and it’s paleo and vegan.

Be careful not to overload the mummies with jam or they’ll be hard to close up properly.

I’ve tried some with melted coconut butter and maple syrup, but I don’t love the flavor or the texture.

Because you can’t stuff the mummies with loads of jam to add flavor, and pie crust isn’t all that flavorful, the icing is necessary. And to add more flavor, I recommend using almond extract!

As long as it pairs well with your jam. If you’re using jalapeno lime jam, you’re not going to want to use almond extract.

But any kind of berry or stone fruit jam pairs perfectly with almond extract!

I also think white chocolate would be great on top instead of the powdered sugar icing. 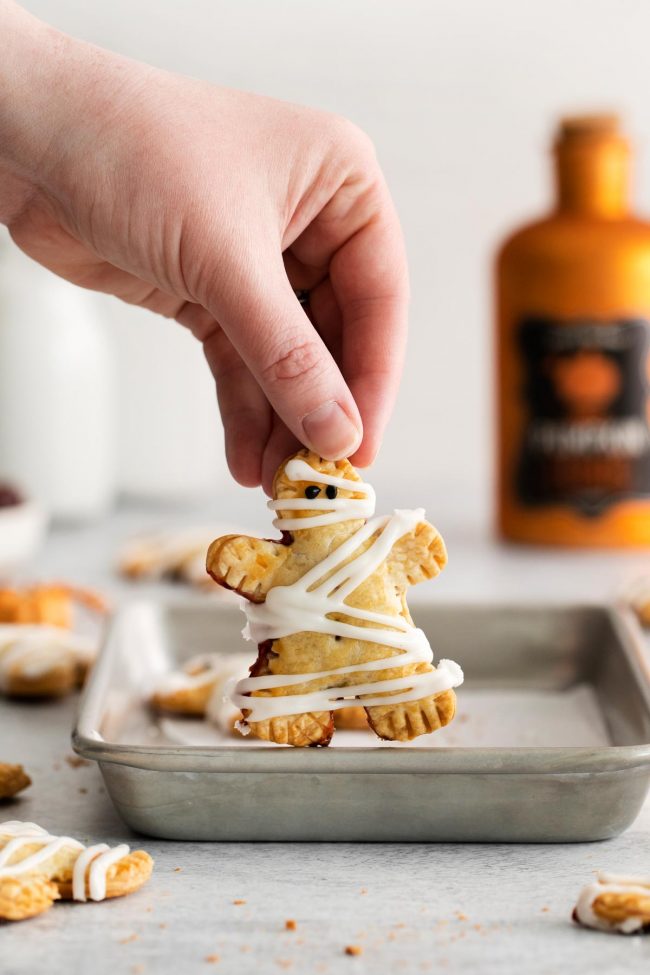 You can use this Almond Flour Sugar Cookies recipe, cut out single gingerbread men, bake and then drizzle with the icing.

I don’t recommend putting on the jam and then another mummy piece on top. It’s too sweet, and it might crack.

I made it gluten-free by using King Arthur Flour Measure for Measure Flour and adding an extra 3 tablespoons of flour. It worked, but it was like a weird cross between a cookie and crust.

And it was too sweet. I preferred the traditional pie crust mummies, so here they are! 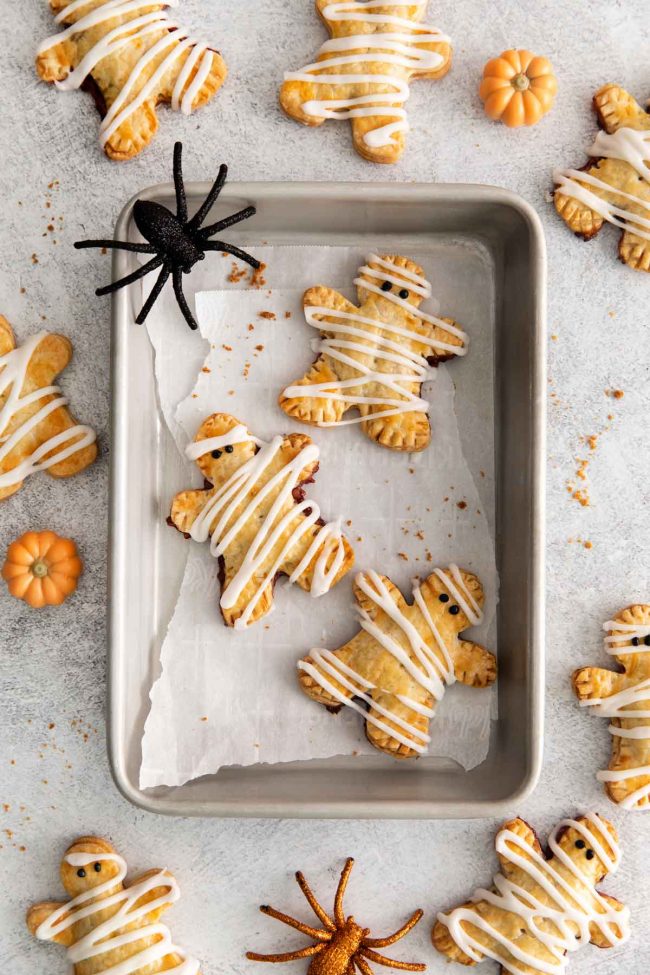 You can melt some semi-sweet chocolate, put it in a piping bag and pipe on the eyes. Or you can stick mini chocolate chips where the eyes go.

If you like candy eyes, you can attach them after baking once they’re cooled. You can use the icing or melted chocolate to attach them.

Can I use X type of pie crust?

I already said this, but someone will still ask, so this question gets its own section. ;)

These Halloween recipes all have tested gluten-free options.

If you try out these mummies, I’d love to hear what you think! And if you use a different pie crust, whether homemade or store-bought, please let us know in the comments, and I’ll update the post with your recommendations!

Note that theses should ideally be made on the day of serving!