This matcha cheesecake is super creamy with just the right amount of matcha flavor, and it pairs perfectly with a homemade shortbread cookie crust. It’s a super easy press-in crust, and it can be made with regular flour or gluten-free flour.

I received a few requests for the matcha cheesecake recipe after posting the Gluten-free Cheesecake Crust Recipes, in which this green cheesecake filling is shown. So here it is!

I adapted it from my Keto Cheesecake. I used regular sugar instead of keto sweetener and added 3 tablespoons of matcha.

The crust tastes like a sugar cookie, but the texture is denser. And I added a bit of lemon zest, which I think goes great with the matcha filling. 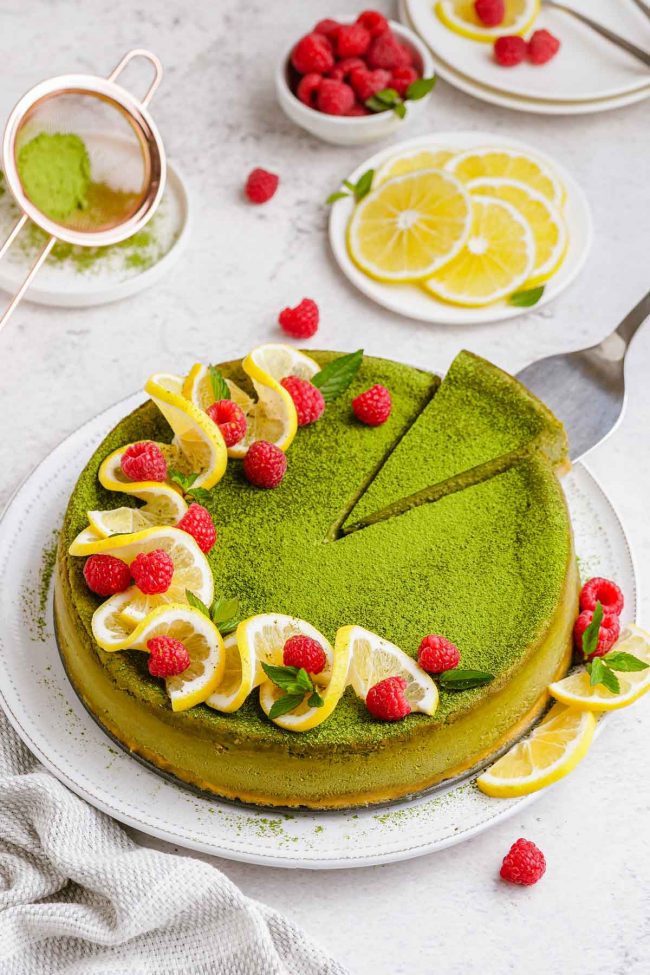 I go into detail about all the ingredients throughout the post, but here’s an overview.

To view and print the full recipe, see the recipe box below the post. 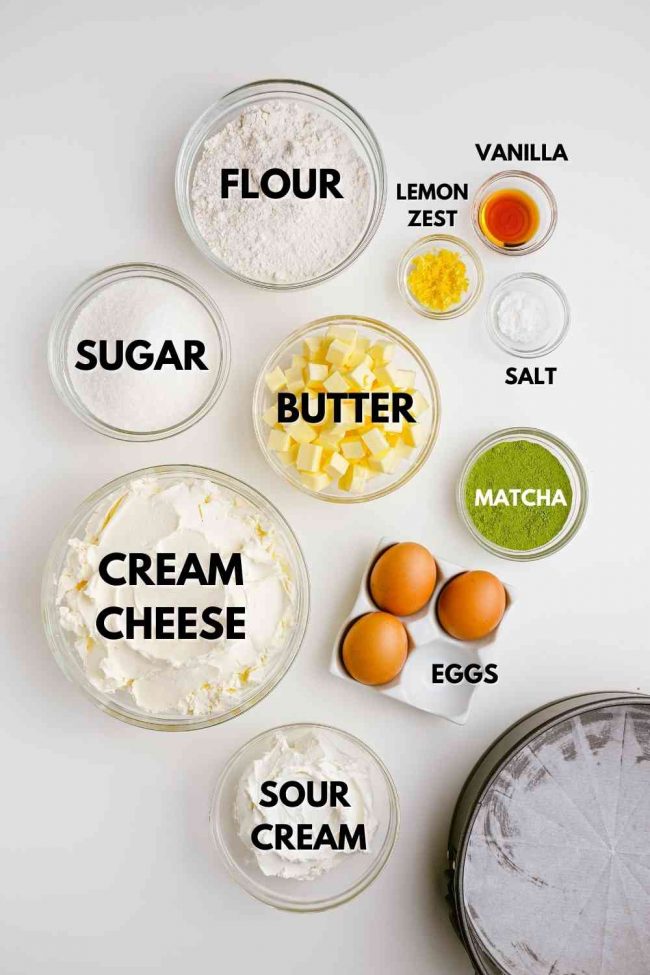 Can you taste the matcha?

Unlike the cookies I mentioned above, this cheesecake has a very, very clear matcha flavor. There’s no chocolate or other flavors to distract from the matcha.

So definitely don’t make this if you don’t want matcha flavor.

If you want to omit the matcha for a plain cheesecake, you can. 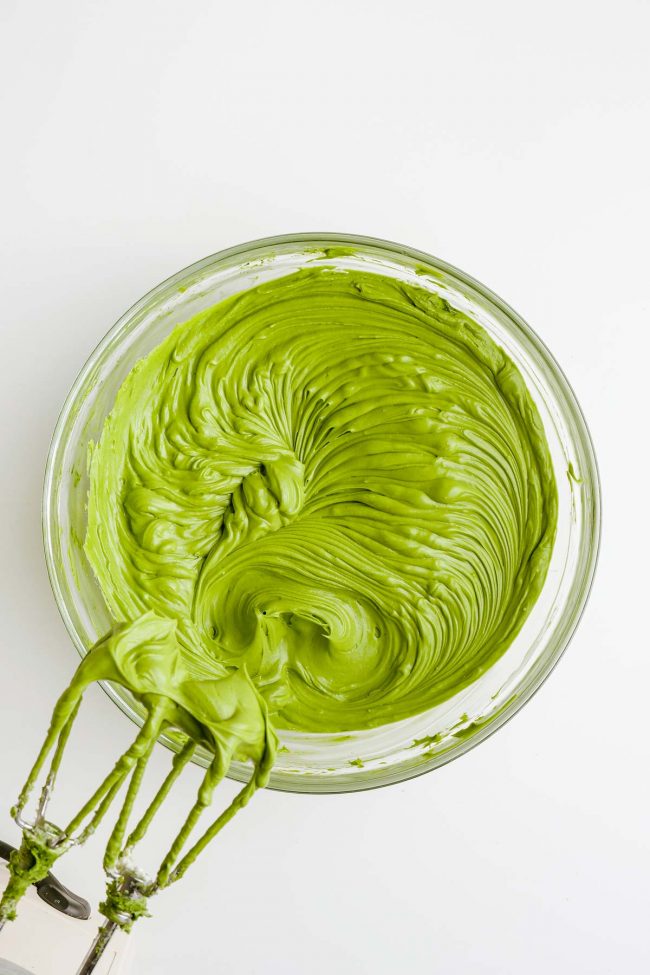 There are two main types of matcha.

When I make this Matcha Chai Latte or any other matcha drink (not just plain matcha with matcha + hot water), I use premium grade matcha. Ceremonial is simply too expensive to use on a regular basis.

For baking, I only use ceremonial grade matcha. 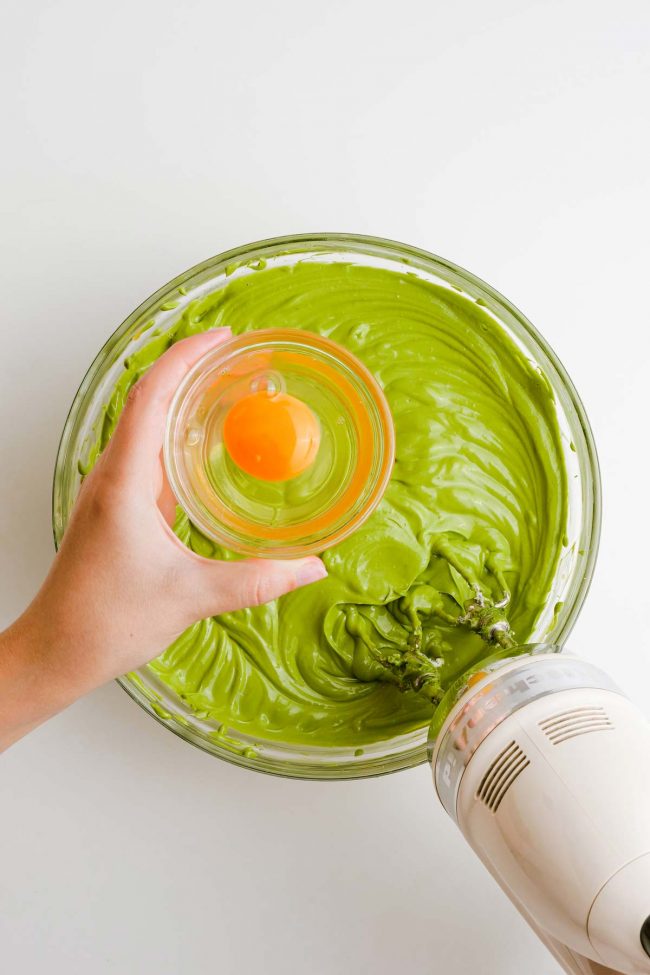 When you google what type of matcha to use for baking, you’ll find opinions vary depending on where you’re looking.

Matcha companies also say that ceremonial grade matcha is too expensive and the flavor too delicate to bake with.

It IS expensive, but you can definitely taste the matcha. And ceremonial is less bitter than culinary, so I’m all for it.

The main problem with culinary matcha is that it’s greenish brown. If you don’t care about the color, then you can use culinary.

If you want the pretty green color you see in the photos here, you have to use ceremonial. 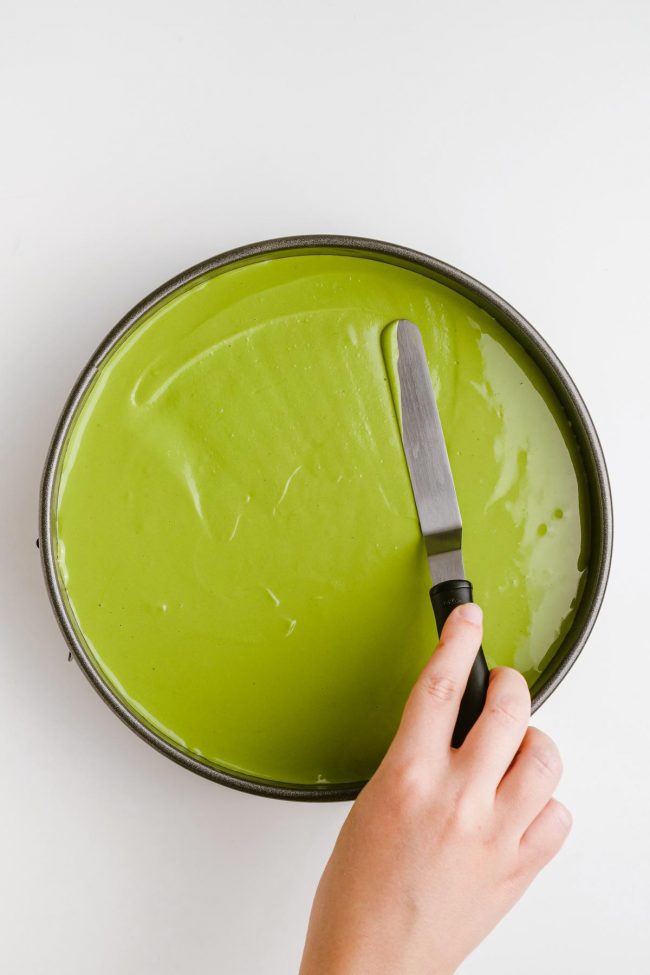 What matcha to use

I looked on Amazon to find the highest-reviewed ceremonial matcha that’s, well… the cheapest.

And I found Midori Spring Ceremonial Matcha. The price and reviews were great.

It’s the kind used in these photos and all my upcoming matcha dessert recipes.

I go into huge detail about different brands of matcha in my Vegan Matcha Cookies recipe. There you can see that Midori Spring is the winner because it’s the cheapest (which is nice because matcha is insanely expensive), almost has the best color, and tastes just as good as all the other ceremonial grade matcha.

Here you can see my little experiment. :) 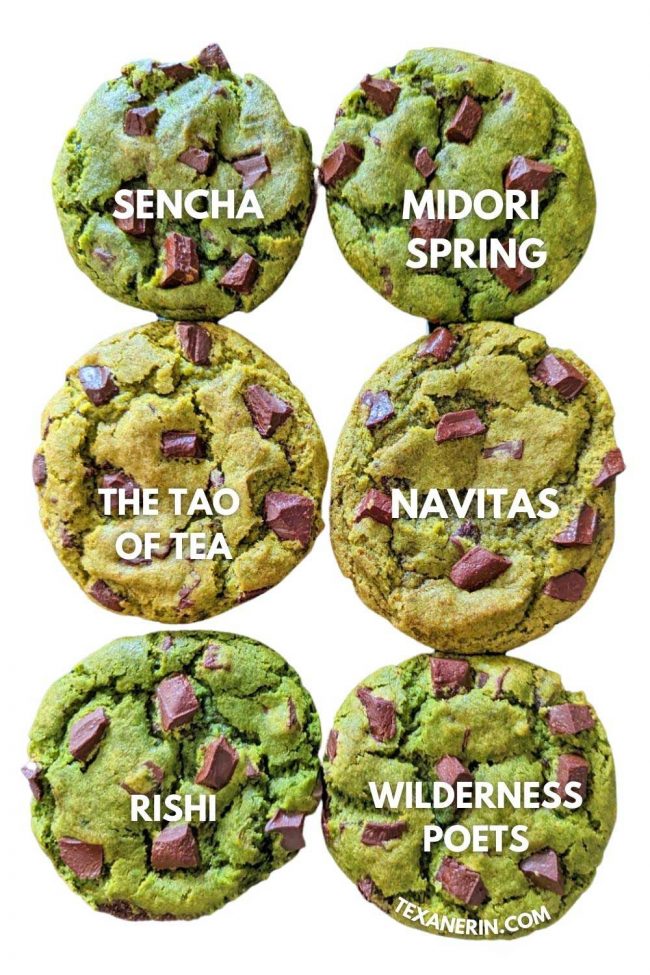 Do I need a water bath?

I said in my Gluten-free Pumpkin Cheesecake recipe that I’d be using water baths from now on after seeing what a difference they make.

I had already made this matcha cheesecake, didn’t use a water bath, and it came out great. BUT… I might have just been lucky.

If you want to use one, then use the directions from the pumpkin cheesecake on how to prepare a water bath. 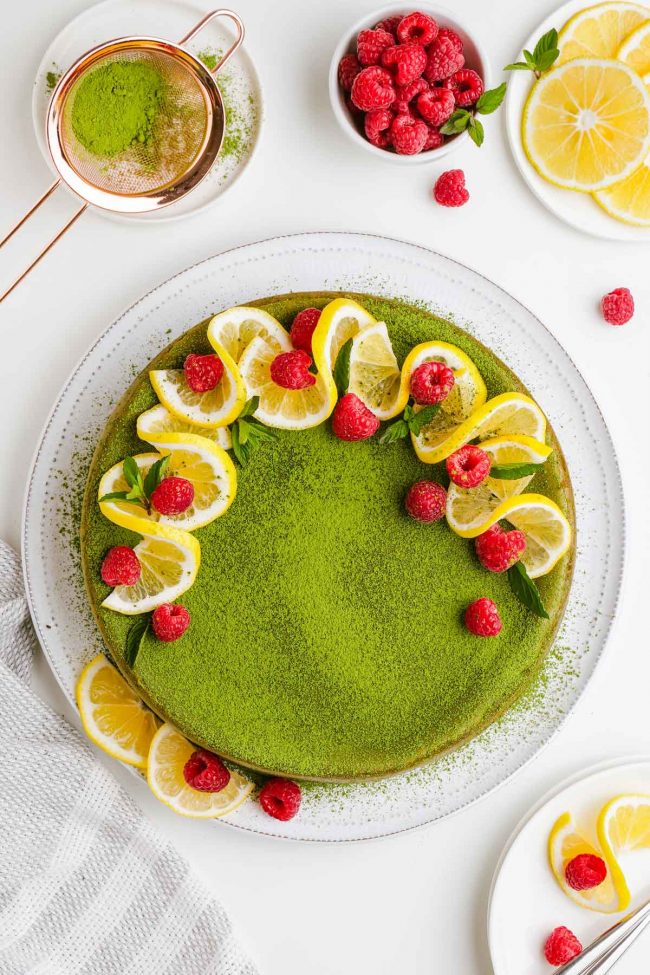 You can skip this part if you live in the US or Canada!

If you live outside of the US or Canada and have the type of cream cheese in little tubs that’s meant to be spread on toast, this is what you have to do:

For 8 ounces (225 grams) of cream cheese, buy a 300-gram package of cream cheese. The stuff at Aldi, Lidl, etc. works just as well as Philadelphia brand. Put the cream cheese in the center of a clean tea towel or cheesecloth, and squeeze out the liquid until you have 225 grams of cream cheese. 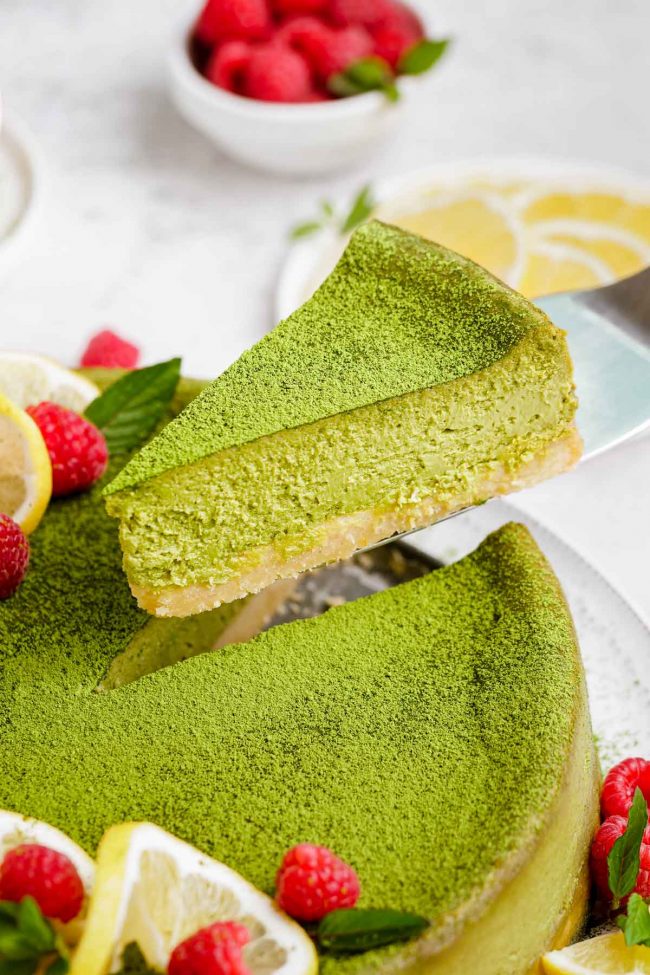 I know it’s annoying. But if you want to skip this step, I wouldn’t recommend this recipe. Or any US cheesecake recipe.

The baking time will probably be different, and you’re likely to over or underbake your cheesecake. I know this because I have done this many, many times and want to save you the trouble and money.

I often find that using European butter with its 82% fat, instead of 80% like in the US, is a disaster in crust recipes. It’s one of the main reasons why I rarely post pies recipes, cheesecakes and other things with baked butter-based crusts. 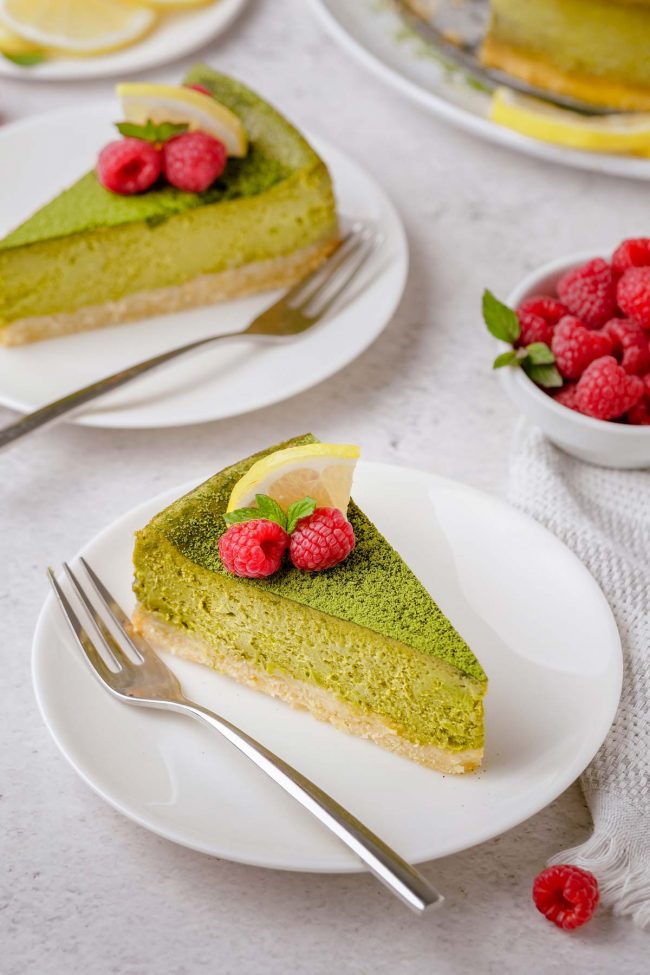 The cheesecake in the photos was made with King Arthur Flour Gluten-free Measure for Measure Flour. Bob’s Red Mill Gluten-free 1-to-1 Baking Flour also works, but I preferred King Arthur.

The texture was smoother, but neither crust tasted gluten-free. 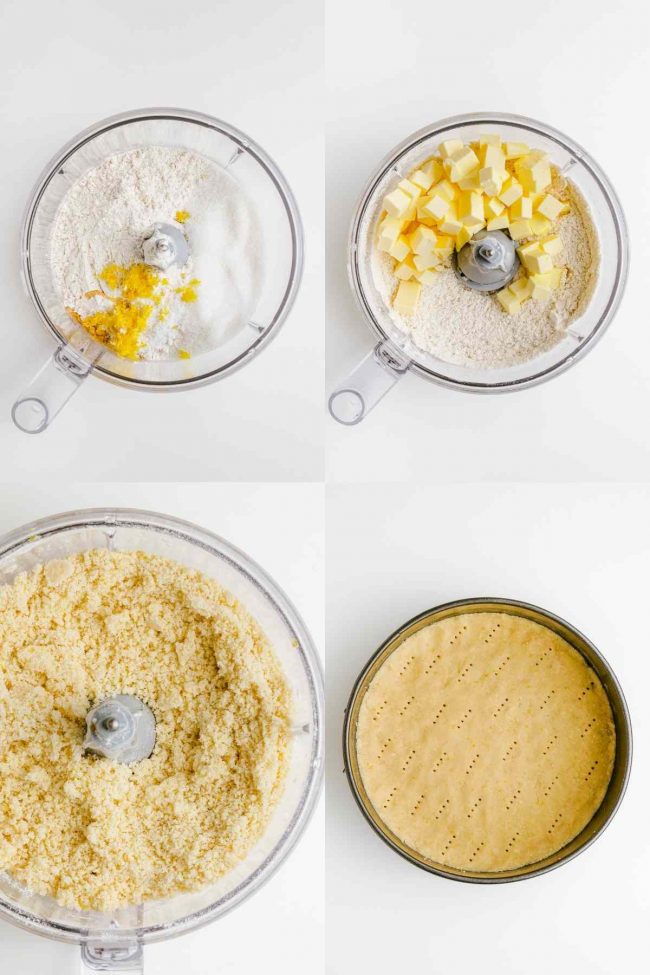 As always, I can’t say for sure if other brands of gluten-free flour work as well without trying them.

Whatever brand you use should be a 1:1 replacement for all-purpose flour. So – not almond or coconut flour. 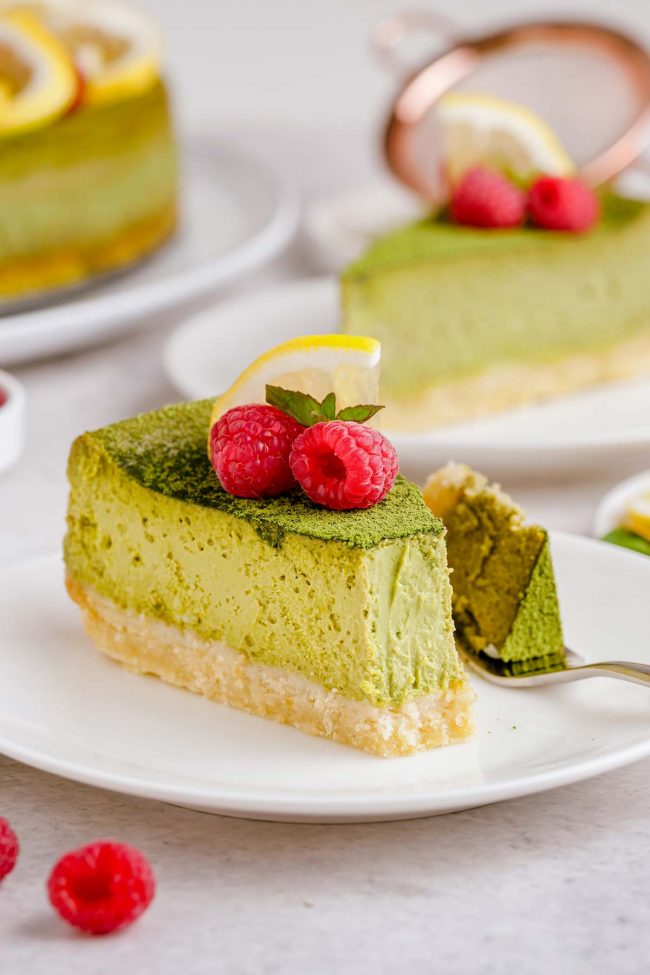 Questions about this matcha cheesecake? 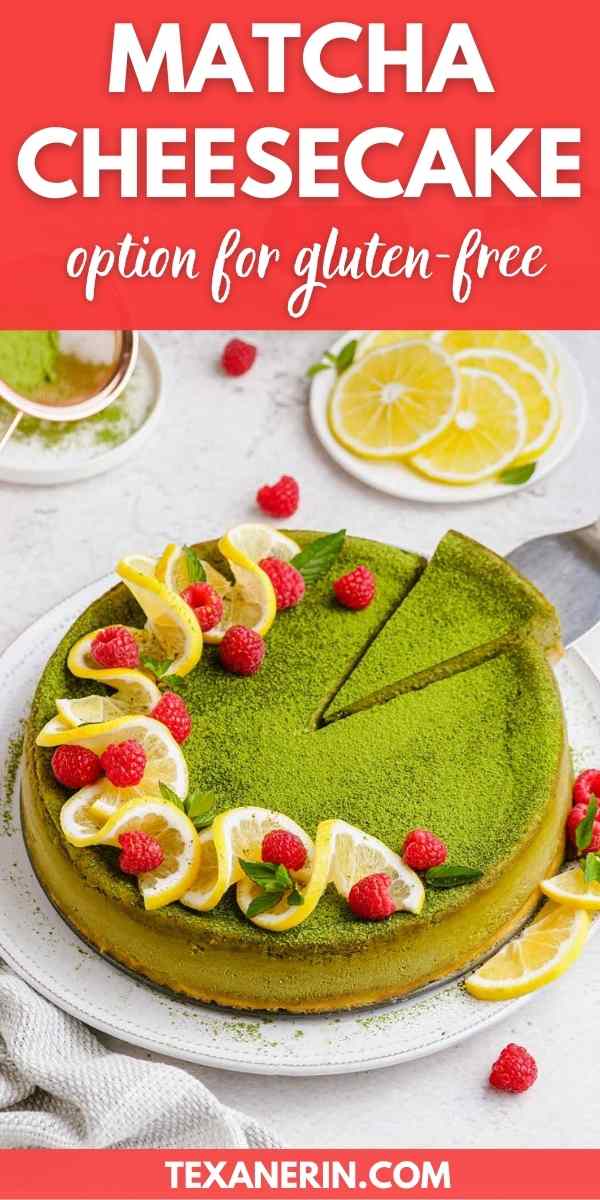 That’s it! If you try this matcha cheesecake, I’d love to hear about it. Please leave a comment or snap a pic and tag #texanerin, so I can be sure to see it! Thank you. :)

For the shortbread crust:

There are no responses on “Matcha Cheesecake” — Be the first one!