This gluten-free pumpkin cheesecake has a super creamy texture with just the right amount of pumpkin pie spice! The crust is also super quick and easy to make and uses just basic ingredients.

For my paleo and vegan readers, I already have this Vegan Pumpkin Cheesecake, which is still a favorite of mine that I make every year. For the dairy lovers, this recipe is for you. 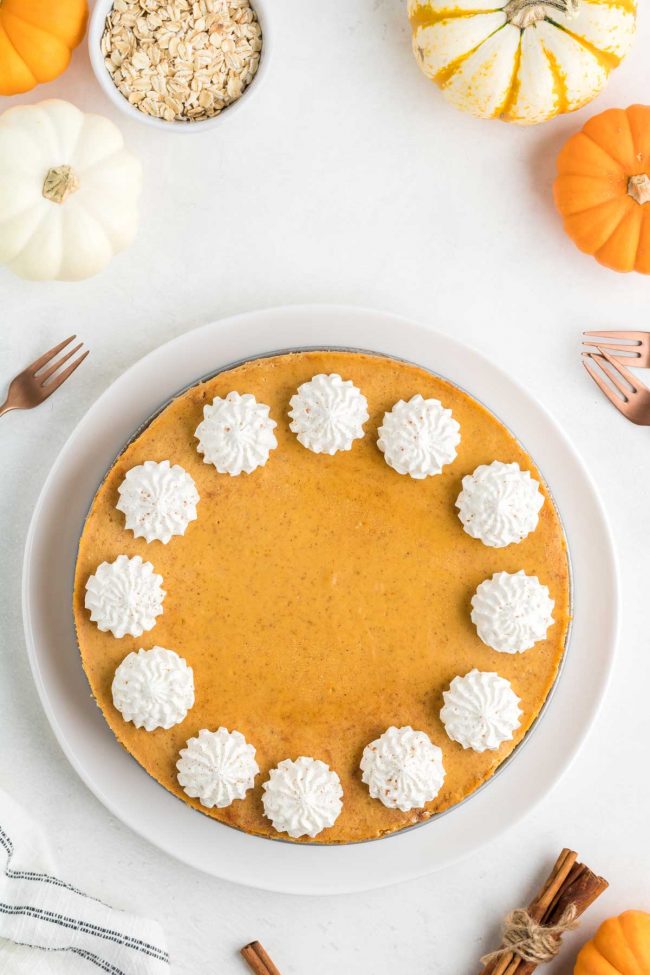 It seems as though most gluten-free pumpkin cheesecakes use store-bought graham crackers to make the crust. I wanted to make a totally homemade crust, and I think this crust is even tastier than a graham cracker crust!

It’s pretty close to an oatmeal cookie in taste and texture, but it’s more crust-like. And it has somewhat of a graham cracker crust taste.

I posted two Gluten-free Cheesecake Crust recipes yesterday, and the one I used in today’s recipe is one of them. If you have any questions or want to learn more about the crust, then be sure to check out that post. 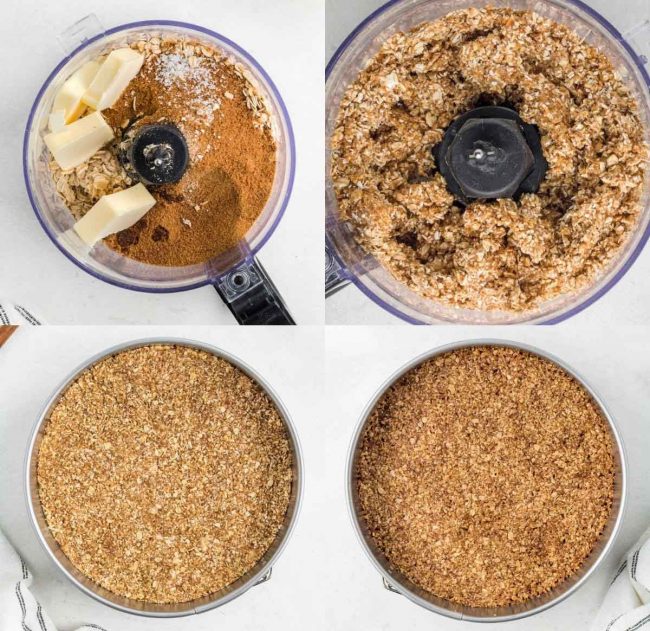 And make sure to use pumpkin puree and not pumpkin pie filling!

Also, I strongly recommend using canned pumpkin puree as it’s more consistent than homemade. Homemade varies so much in how thick it is.

If there’s too much water in your puree, you need to strain it a bit until it resembles canned pumpkin puree. You can see how I did it in my Homemade Pumpkin Puree post. 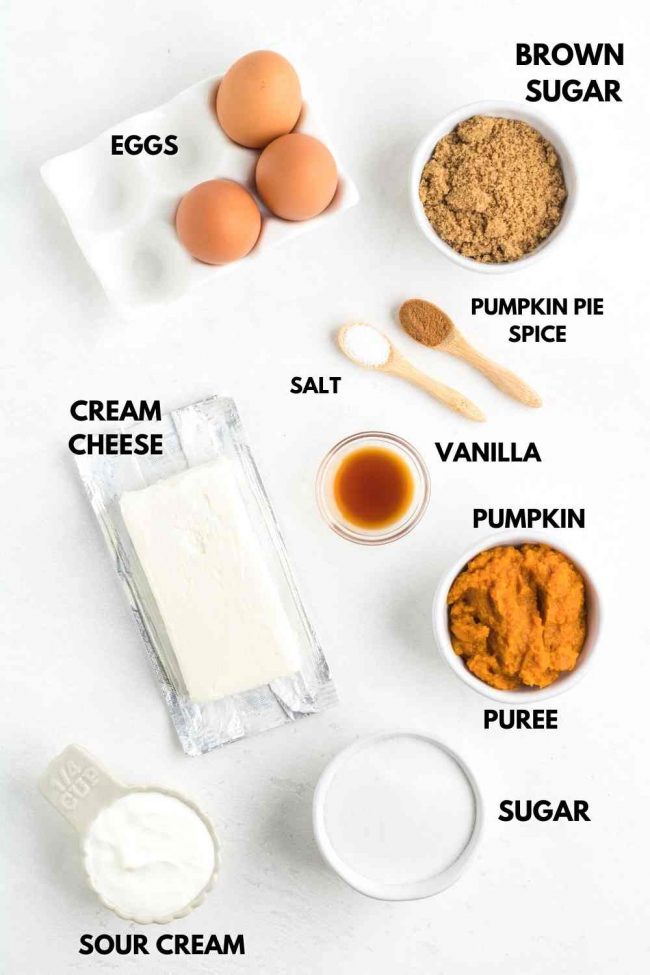 Can I omit the pumpkin?

Can I use coconut sugar in the filling?

Sorry, but that’s also something I can’t recommend until trying it myself. I think it’d be good tastewise, but I’d be afraid of it cracking.

Can I omit the pumpkin pie spice?

Yes, but I would highly recommend using at least 1 1/2 teaspoons of cinnamon in its place. The amount is just a guess, though.

No need to buy store-bought pumpkin pie spice if you don’t have any! You can simply use the below mix in today’s cheesecake recipe. 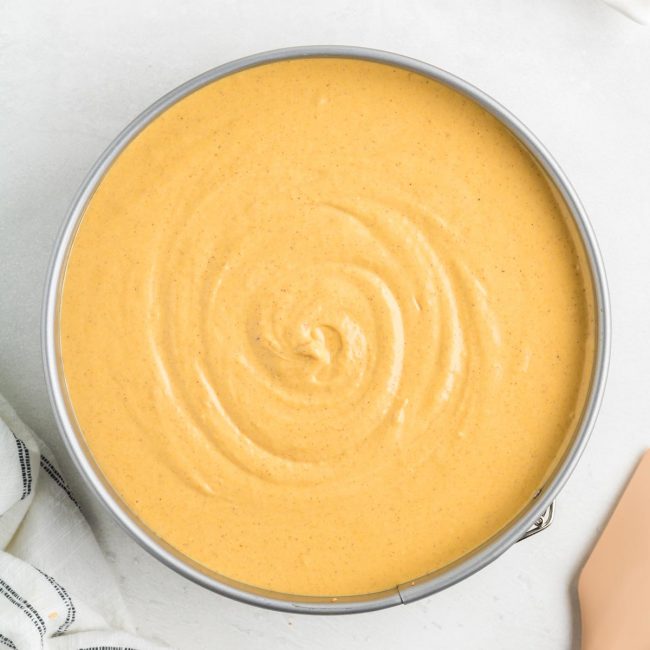 Since using sour cream in my keto cheesecake recipe, I’m all for it. It adds extra moisture and tang.

If you don’t want to use sour cream… I don’t know. I’ve seen many people say that you can use heavy cream or full-fat Greek yogurt in its place.

If you’re up for experimenting, you can try that. If it’s important that this cheesecake not have cracks, then I wouldn’t risk it. 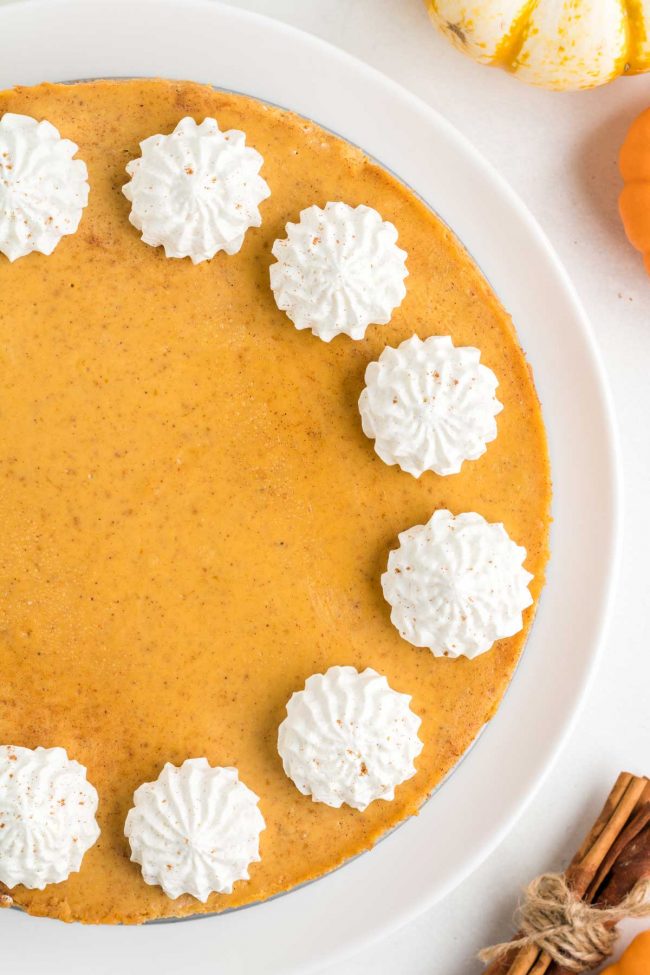 There isn’t a good sub for eggs in a baked cheesecake like this. If you eat dairy, but not eggs, I have this wonderful Eggless Cheesecake.

It uses cornstarch in place of the eggs, but it’s not a direct sub. So, nothing like 1 tablespoon of cornstarch for each egg.

I made other adjustments to the recipe to get the perfect texture and to get it to hold together properly. 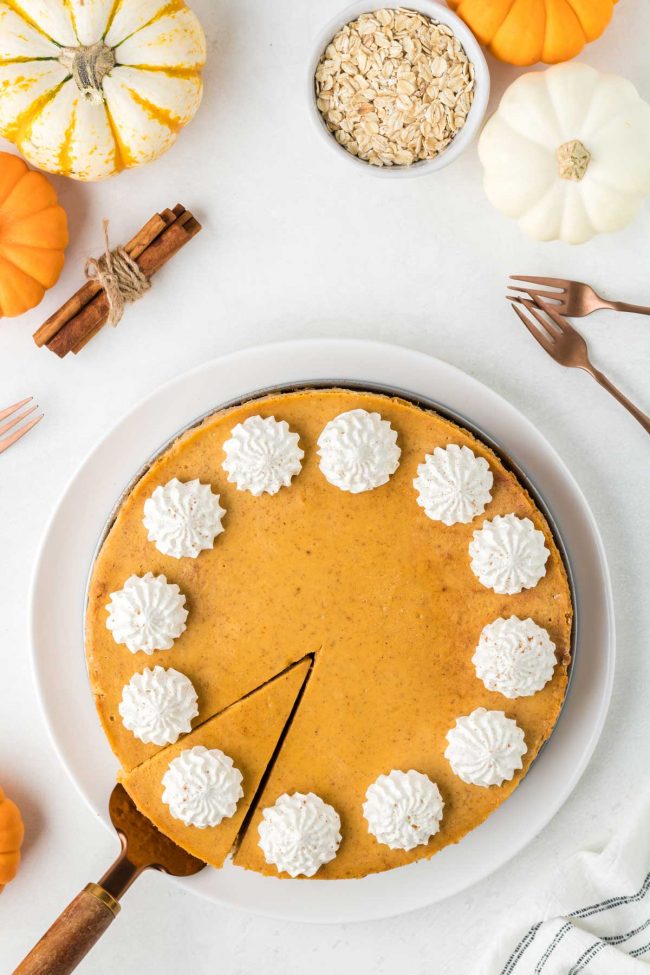 Do I have to use a water bath?

I always used to groan at the thought of cheesecake water baths. And I never did them. Until this cheesecake.

If you don’t mind your cheesecake looking like the photo below, then you can skip the water bath. It came out of the oven looking perfect and then cracked during the 2-hour cool down out of the oven.

If you prefer your cheesecake to look like the other photos in this post, then you must use a water bath.

I’ve only ever posted two full-sized non-vegan cheesecakes: this Keto Cheesecake and this Keto Pumpkin Cheesecake.

I’m not sure if I just had tremendous luck with them, or if the difference is that I used keto sweeteners, but they came out looking perfect without a water bath. 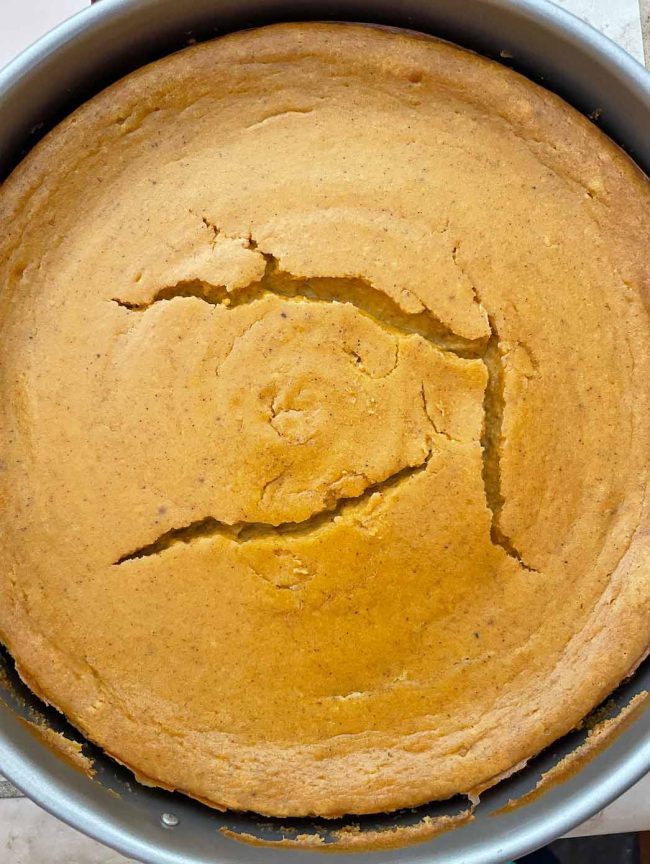 When you see photos of a cheesecake being baked with a water bath, and then photos of the same cheesecake baked without one, you’ll be convinced, too. Here’s a great post all about water baths and lots of comparison photos.

Now that I’ve used a water bath, it’s not scary. It’s one of those things that you do once, and then it’s no big deal. It adds 5 minutes of prep time. That’s it!

If using a food processor, you can use either. 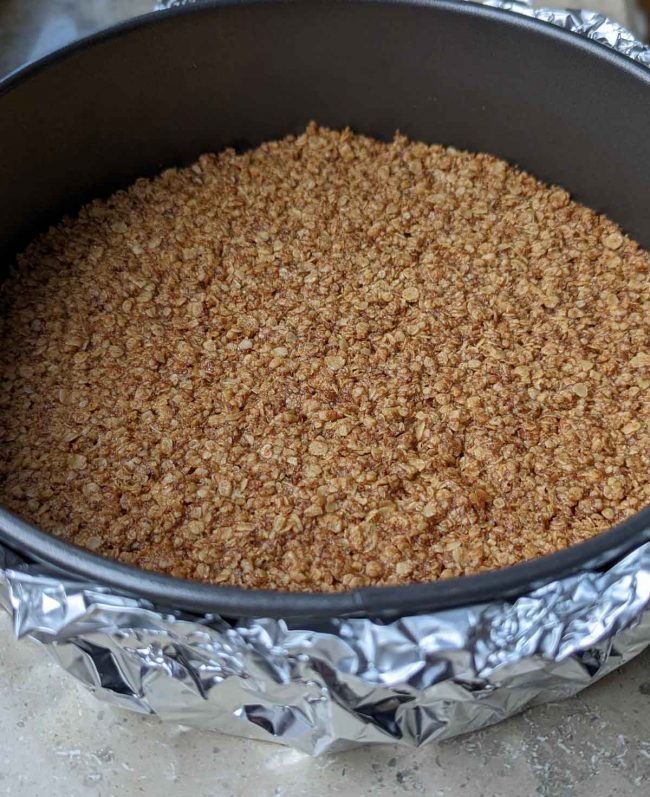 Why use a water bath

A water bath is a pan of hot water that surrounds your cheesecake pan. It buffers the heat so the cheesecake bakes evenly without drying or cracking.

Cheesecake batter is like a custard. Without the extra moisture, a cheesecake can become rubbery in texture.

The water surrounding the pan won’t get hotter than 212 °F (100 °C), which allows the cheesecake to bake slowly and evenly without burning the top.

Tips for a water bath 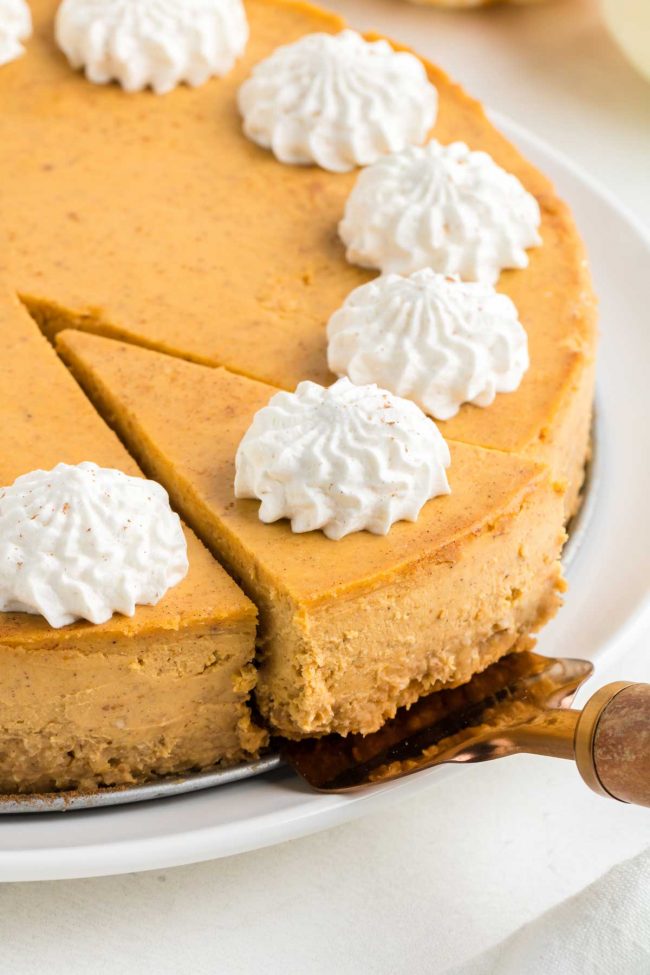 Live outside the US?

If you live outside of the US, you probably have a different type of cream cheese than in the US. US cream cheese is firmer and meant for baking, rather than the kind for toast, like in Europe – and I believe the rest of the world.

If you don’t do this and use the cream cheese as is, then your cheesecake will be too watery and won’t bake through.

You’ll keep baking and baking, then it’ll dry out and you’ll have a lousy cheesecake. It’ll also probably crack. 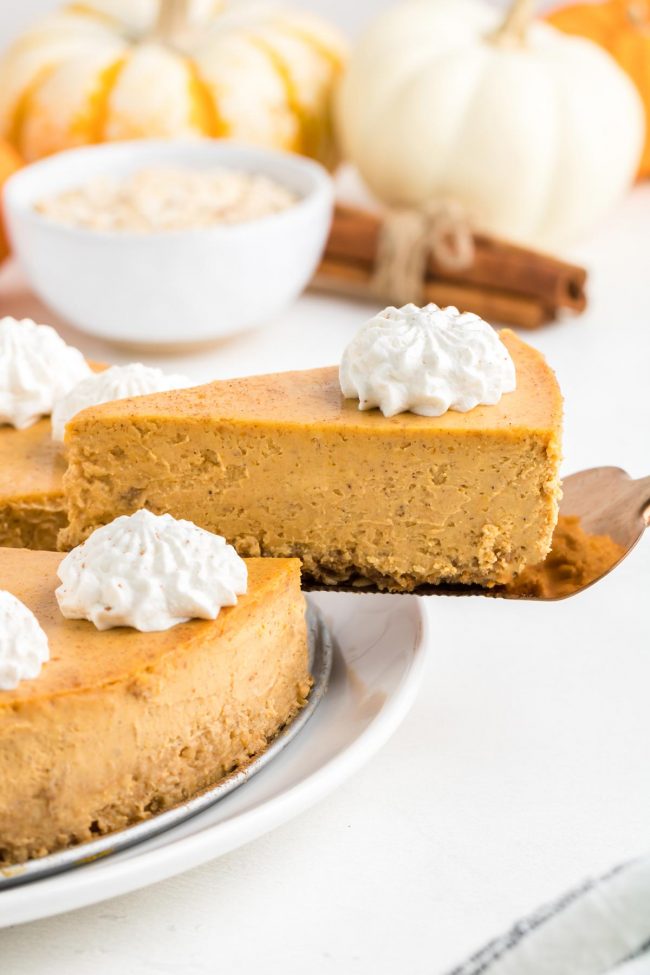 First, I’d have to advise you not to make a pumpkin cheesecake. ;)

If you’ve been tasked to make a pumpkin cheesecake against your will, there’s hope you might like this one!

That pumpkin cheesecake is AMAZING! I’m not really a pumpkin or pumpkin spice fan, but that cheesecake might have me changing my mind! The texture is super creamy, and it’s not too sweet, just perfect.

It definitely has a nice pumpkin and pumpkin spice flavor, though. I can’t really understand why she likes it if she doesn’t like pumpkin. But I’m taking it as a compliment. :) 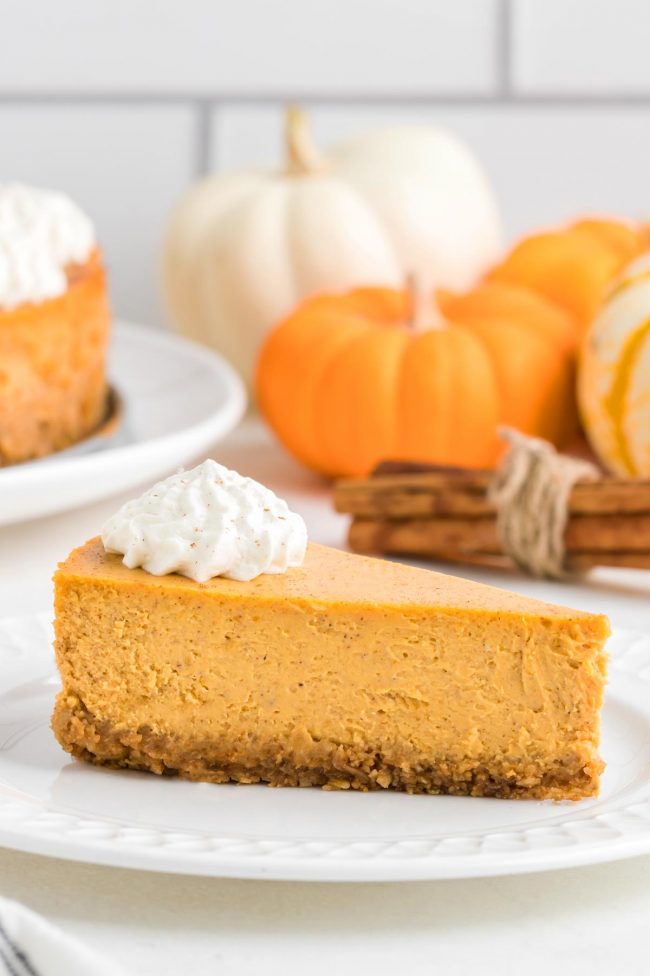 I would love to hear from you if you try this gluten-free pumpkin cheesecake! Please leave a comment below or on social media, mention @texanerinbaking or tag #texanerin so I can be sure to see them. Thank you! 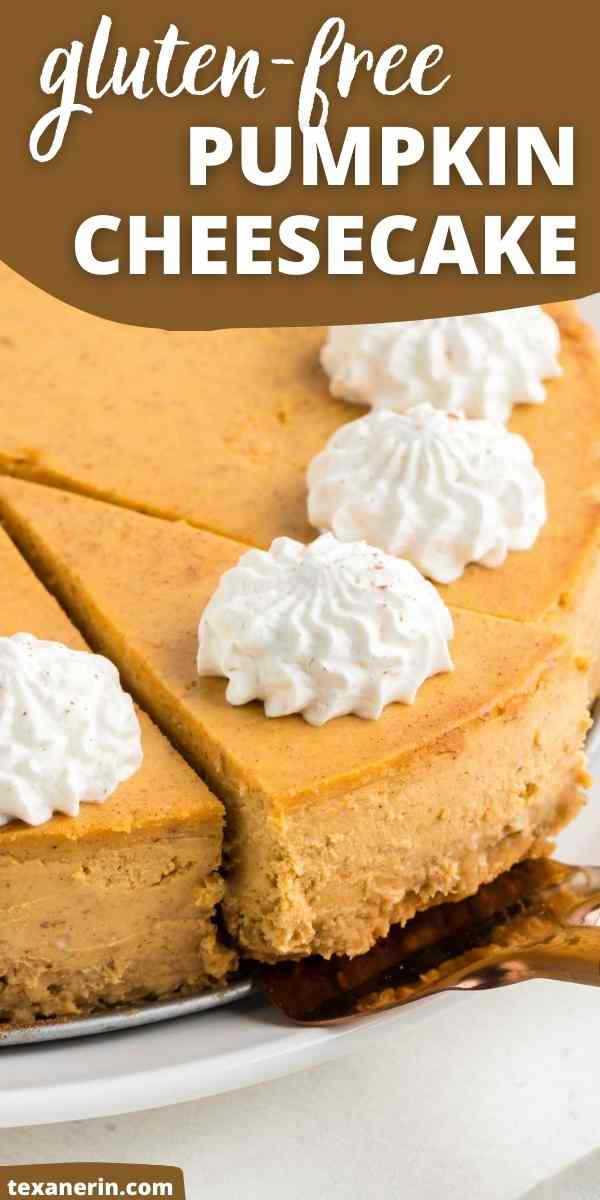 Please read all the notes before beginning or buying ingredients!