These Halloween dirt cups are easy to make with rich and creamy chocolate pudding, homemade chocolate cookie crumbs, and banana ghosts to treat kids of all ages. They’re also easy to make gluten-free and paleo. The recipe is vegan as written, but regular milk and butter can be used, if preferred.

I’m having lots of fun with my Halloween recipes this year. I posted these ghostly Gluten-free Halloween Cupcakes and these Gluten-free Mummy Hand Pies recently, and today we’ve got this delicious dirt pudding. 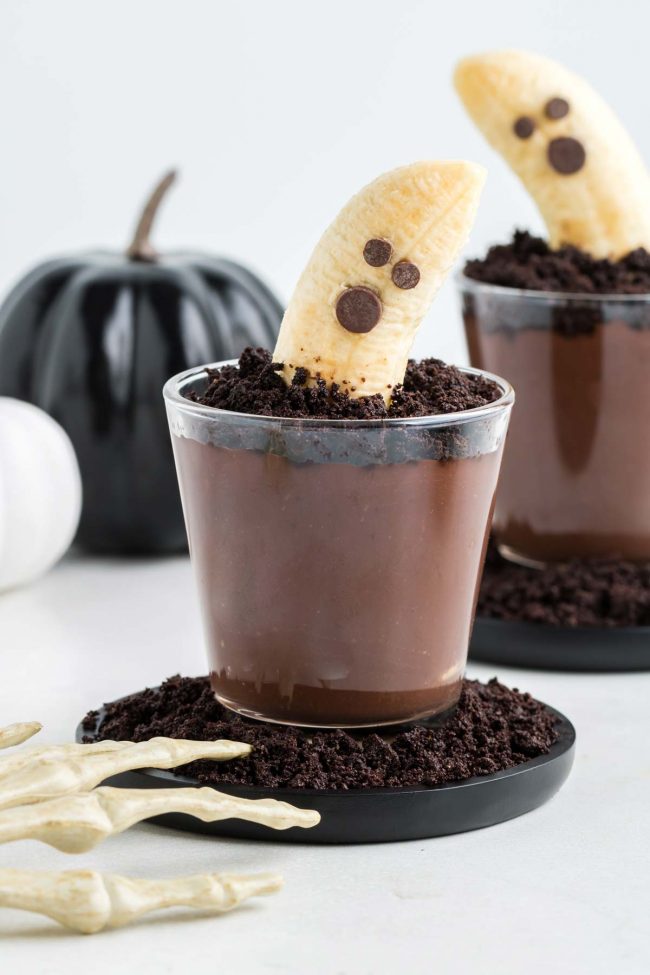 This recipe combines two recipes plus some extra ingredients to make it Halloween-y. First, I started with this Gluten-free Pudding as the main ingredient. It’s a super simple recipe with basic ingredients, but if you don’t want to make that recipe, you can make any pudding you’d like. I list some alternatives below.

For the chocolate cookie crumbs, I used the base of these Mini Irish Cream Cheesecakes, which by the way, are perfect individual holiday treats!

By combining the two recipes and adding the banana and chocolate chips for the face, you’ve got healthy Halloween treats without having to use a lot of tricks in the kitchen. 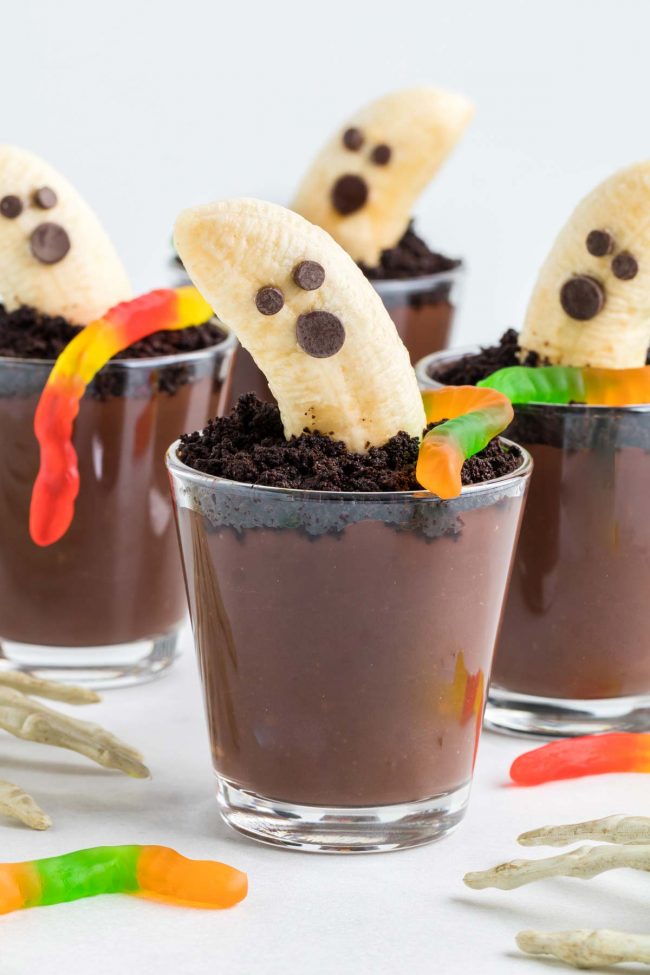 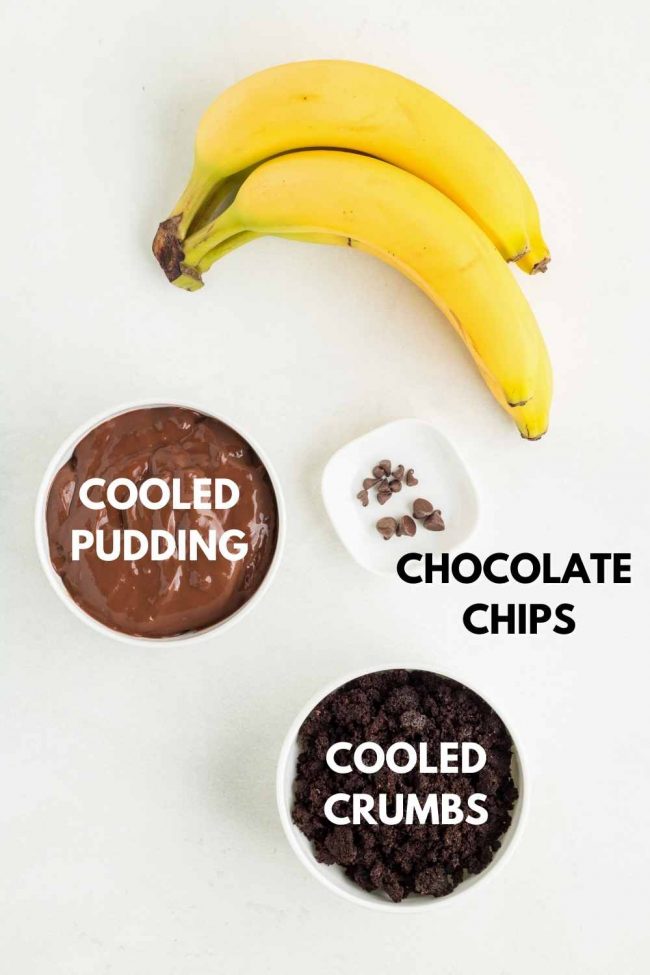 How to make dirt cups

While that’s cooling and chilling, prepare the crust.

First, you mix together all your dry ingredients. 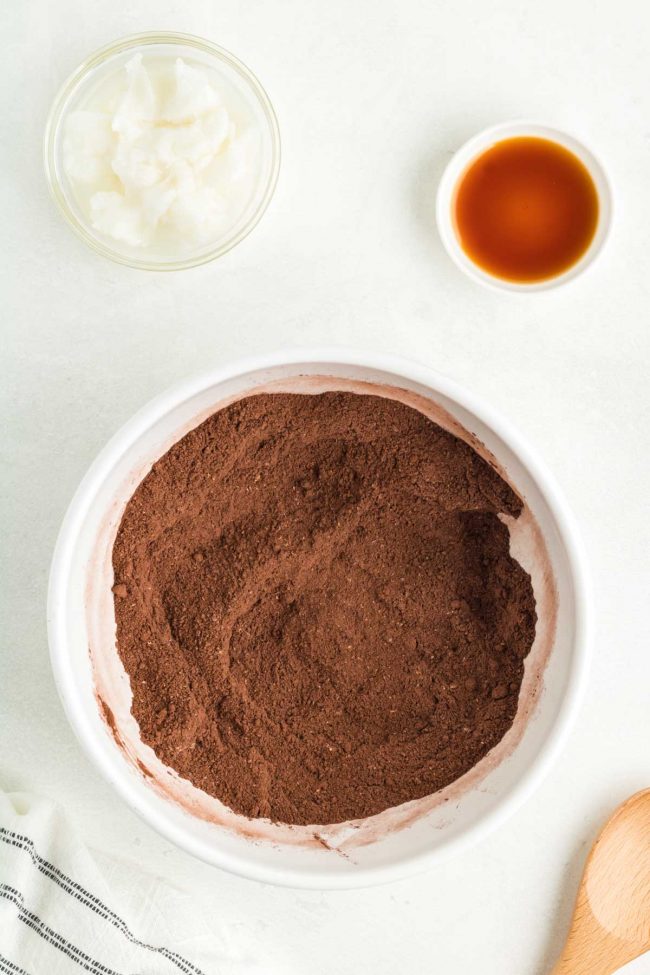 Then add the coconut oil and vanilla. Mix until totally combined. 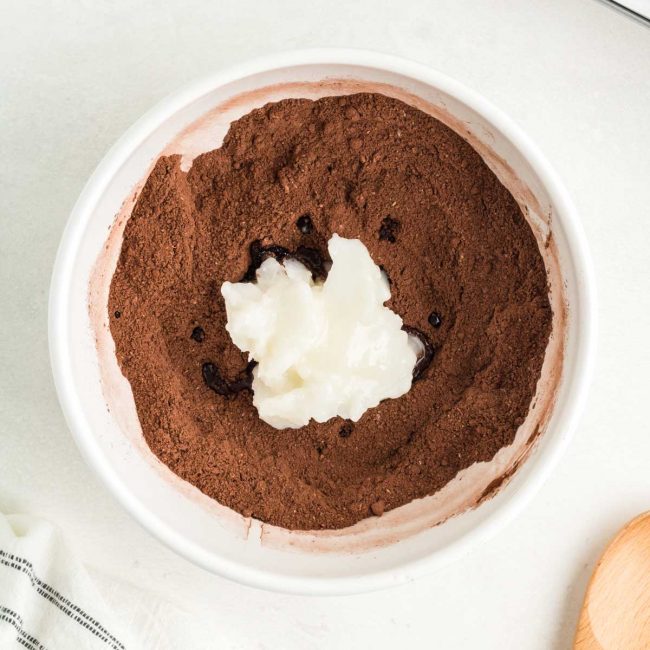 Pat it into the pan.

If it’s sticky and you’re having issues, then wash your hands (assuming they have bits of dough on them), leave them a bit wet and pat the dough down. That should work better. 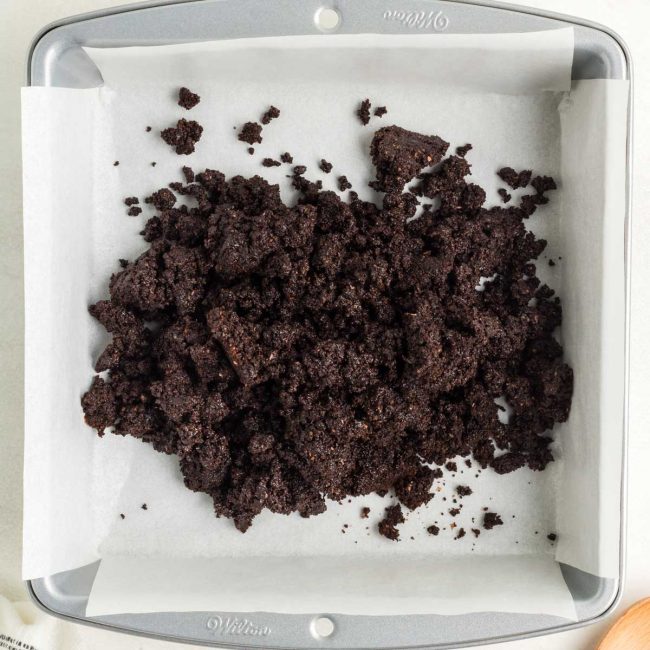 When you remove the cookie base from the oven, it’ll look crazy. Some parts may be bubbling, and some parts may be totally greasy and wet. It’s a mystery. Once it cools, it firms up.

Let it cool, and then use the bottom of a flat glass to crush the crust to form crumbs. Or remove the crust from the pan, and use a rolling pin. Whatever you like! 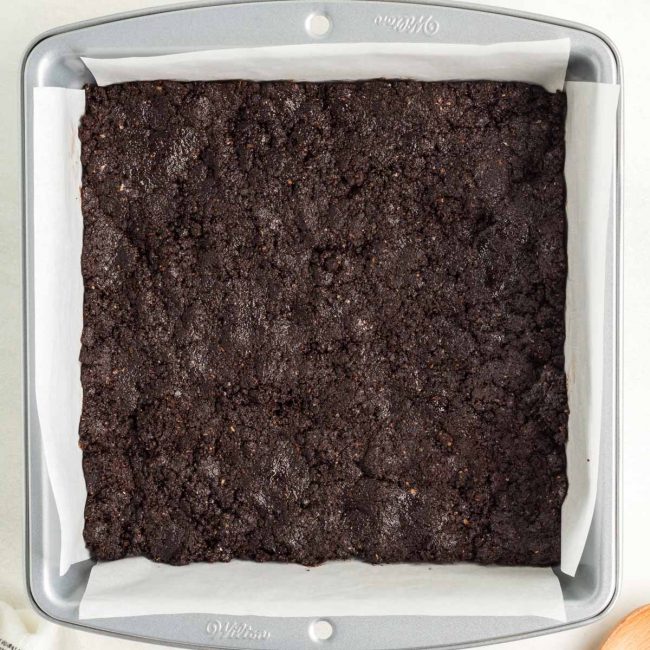 Right before serving, it’s time to make the ghosts. If you’re making these dirt cups for a party, it’s fine to have them sit out for a few hours. I’m sure they’ll be grabbed up fast!

The first time I made a ghost, I cut the banana too small, and the face was too low. To avoid this mistake, hold the banana up to the serving cup, and cut it according to the size of the cup.

Regular dirt cups use Cool Whip to lighten the pudding, and that’s why you usually see them layered. I tried layering the pudding cups using 1/4 cup pudding, 1 tablespoon of crumbs, and more pudding + crumbs, but the pudding wasn’t thick enough and covered up the crumbs. 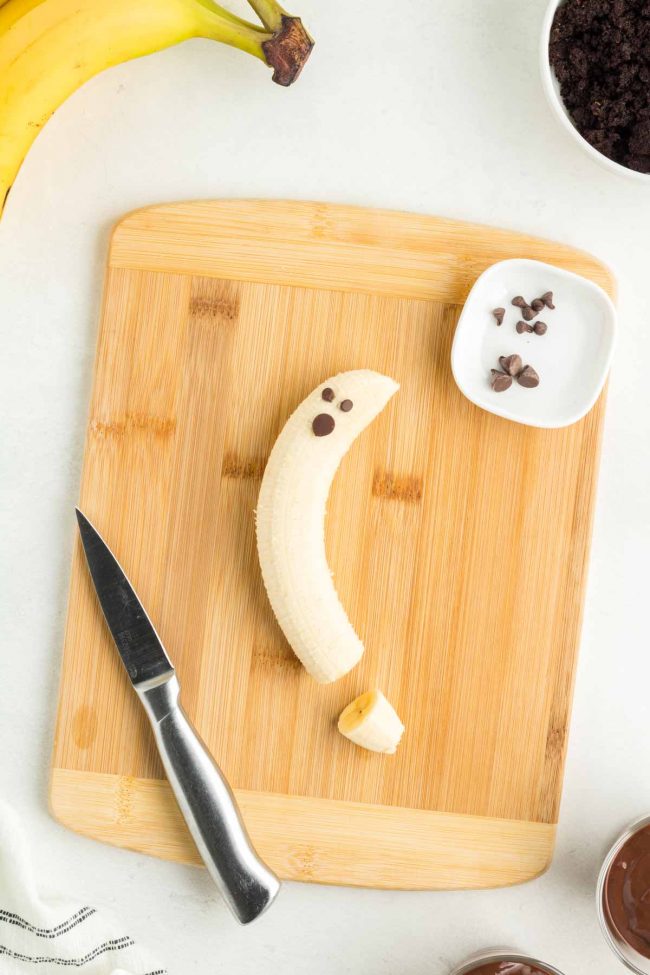 How to make ahead of time

The pudding and crumbs can be made 4 days of ahead of time. Refrigerate the pudding in an airtight container.

Crush the crust to form crumbs, and then store them in an airtight container.

Then right before serving, cut up the bananas to make the ghosts.

All you have to do is leave out the gummy worms (or use the homemade recipe I linked to above where I talked about ingredients) and use 3 tablespoons of coconut flour instead of normal flour in the cookie crust.

Make sure to use coconut sugar and coconut oil, as listed in the recipe, instead of brown sugar and butter.

And also use paleo chocolate chips and use one of these pudding recipes: Chocolate Chia Pudding or Vegan Chocolate Pudding. 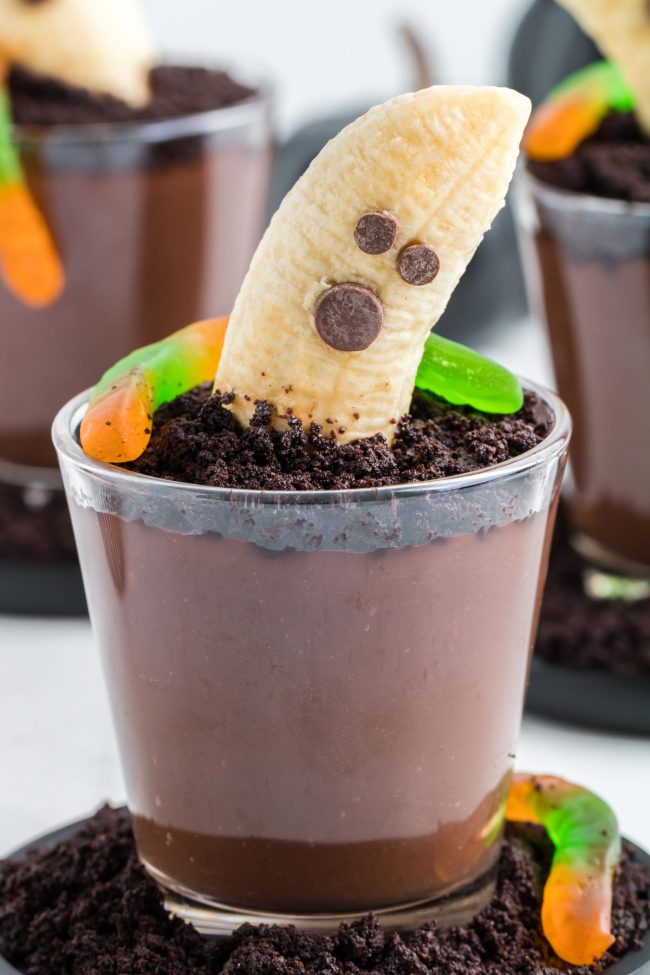 I have loads of fall recipes! Here are some of my favorite healthier treats for Halloween. 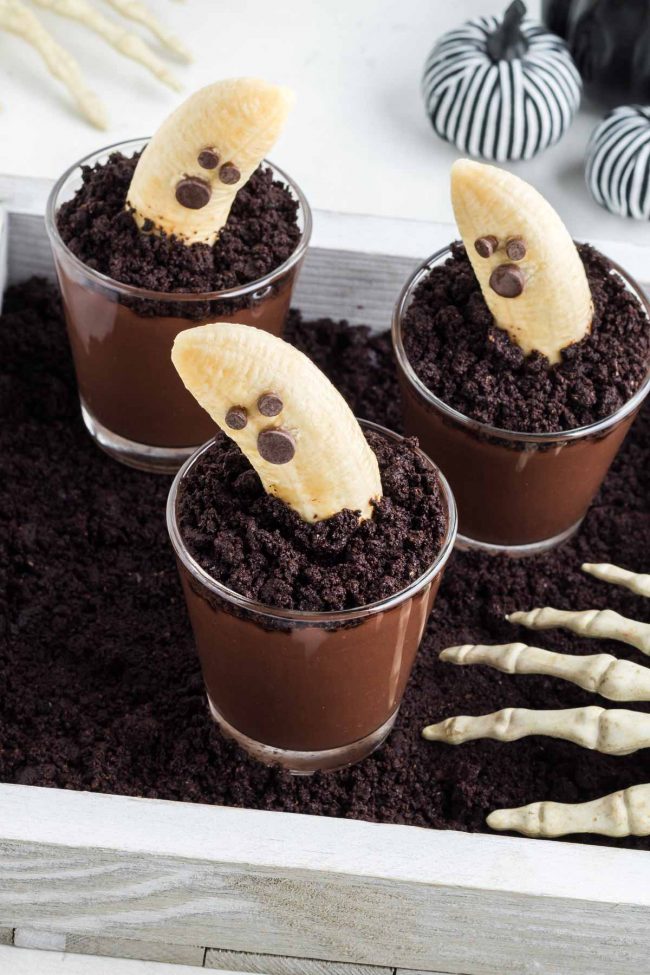 I hope you get a kick out of these Halloween dirt cups! Enjoy. :) 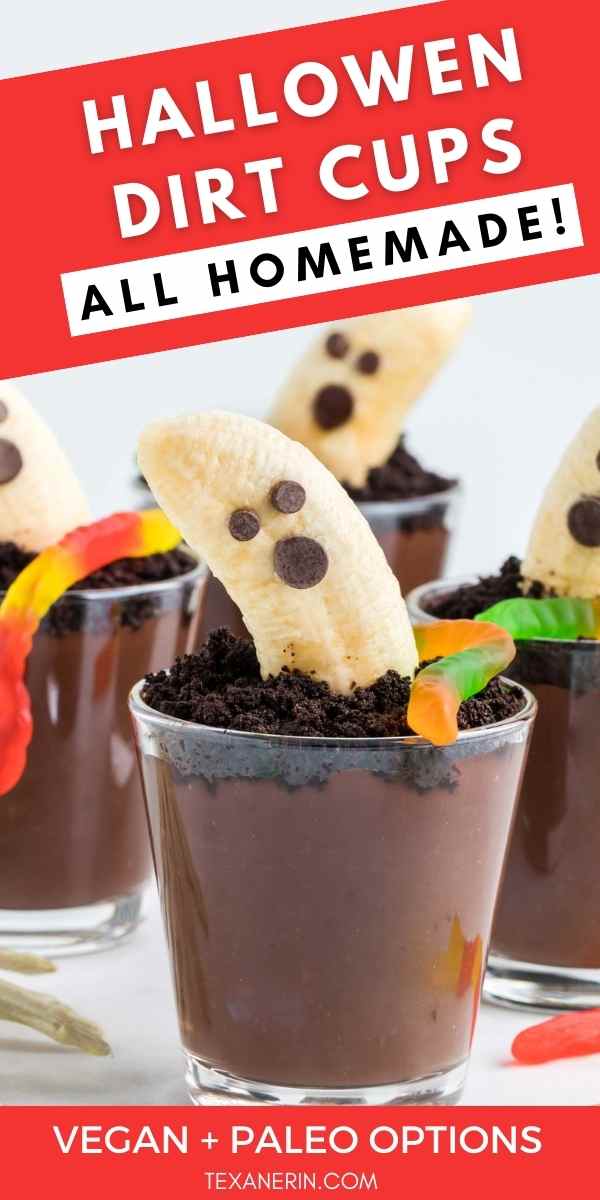