This Keto Pumpkin Cheesecake has an incredibly creamy filling and a flavorful, crisp and graham cracker-like crust! It can be frozen and thawed for Thanksgiving as it freezes perfectly.

I couldn’t be happier with how this cheesecake came out. I’d dabbled with keto recipes for years and really didn’t like the results. Believe me – if I’m posting a keto recipe, you know it has to be good because I can’t stand the taste of most keto desserts.

If that sounds like you, try this cheesecake! It is the ultimate keto Thanksgiving dessert.

I’m not sure if cream cheese does something magical to keto sweeteners to make them more palatable or whatever, because man… this cheesecake is amazing, even for non-keto-eaters! 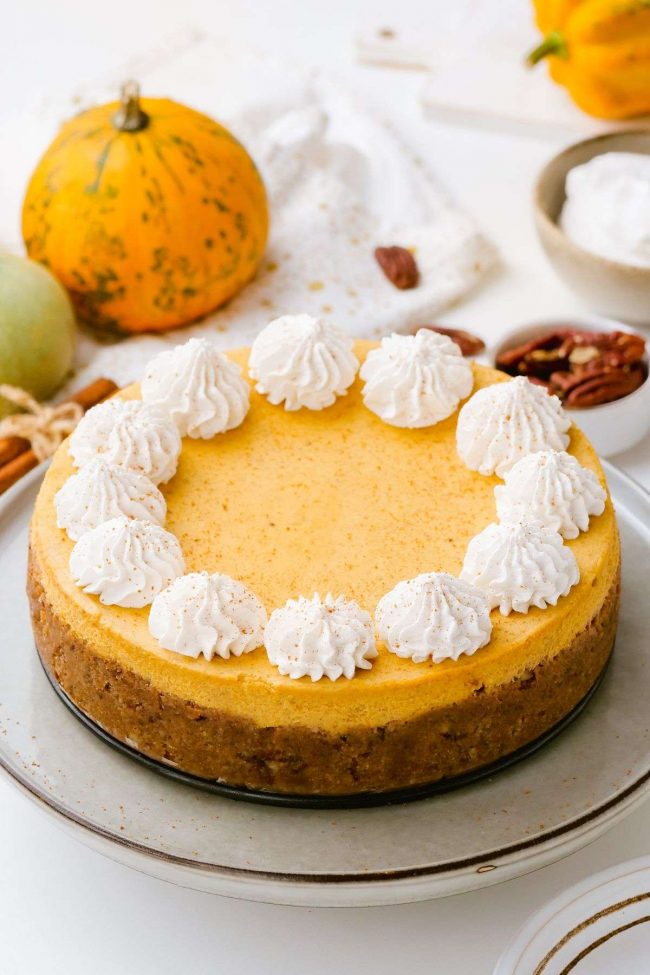 The only non-standard ingredients compared to a traditional pumpkin cheesecake are almond flour for the crust and the keto sweeteener.


For the cheesecake filling 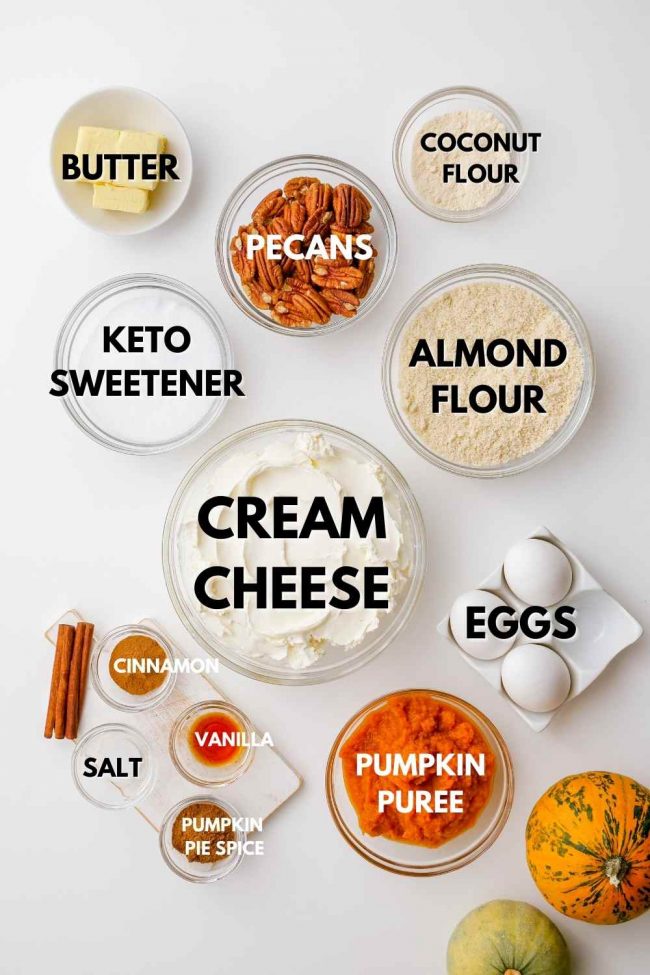 This is what I’ve tested this recipe with so far:

I haven’t tried granulated Lakanto so I’m really unsure if it’d work. If you want to try that, I suggest using 1 cup Golden Lakanto for the filling and using 5 tablespoons for the crust.

Or maybe a little less. It depends on the recipe.

Once you have that mixed up, then you can make these other delicious low-carb recipes: 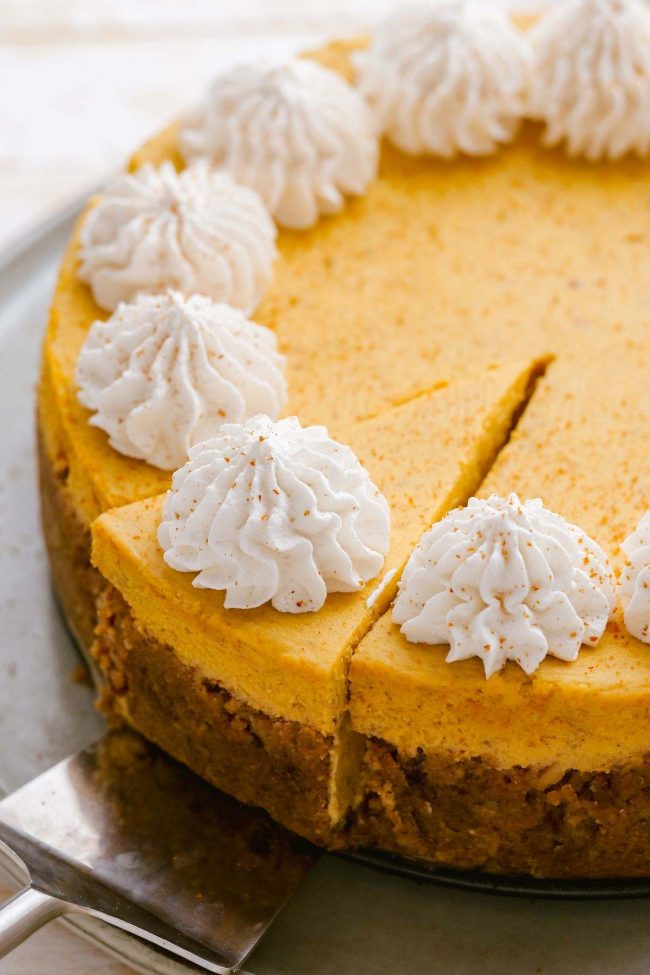 You’ll want to use a food processor to get the nuts uniform in size. If you use a high-speed blender, you won’t get that.

Dump everything into the bowl of a food processor, and process until you don’t have any large chunks of butter. You don’t want to process too long or it’ll become clumpy and bake up differently.

What you see in this photo is almost overprocessed. If you use powdered Lakanto, your crust will look much, much drier.

Almost like dry powder. You can pat that powder straight into the pan!

It works great. I highly recommend using powdered Lakanto if you have some or can get your hands on some. 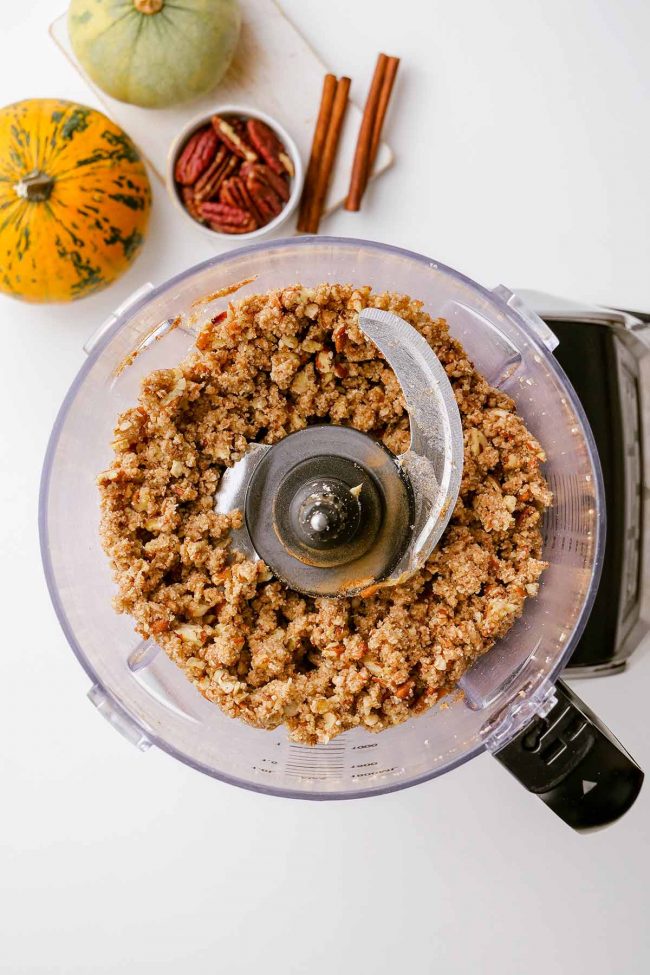 Now you press it down into the prepared springform pan. The crust will go up a bit more than halfway up the sides.

It shouldn’t be pressed up so high that the crust is super thin because then it would be difficult to cut your cheesecake. You want the filling to fit in the crust, so it also shouldn’t be too low. 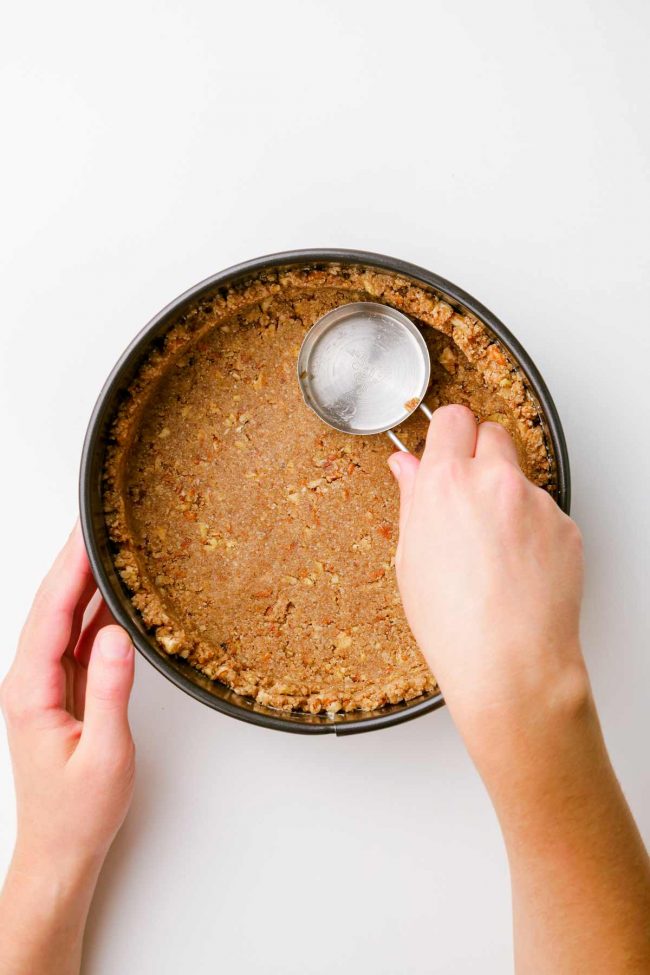 Now it’s ready to bake! I’ve made this keto pumpkin cheesecake 6x and the crust held its shape perfectly each time.

But ingredients can vary from brand to brand. If your crust slumps a bit during baking, just push it back up with a spoon. 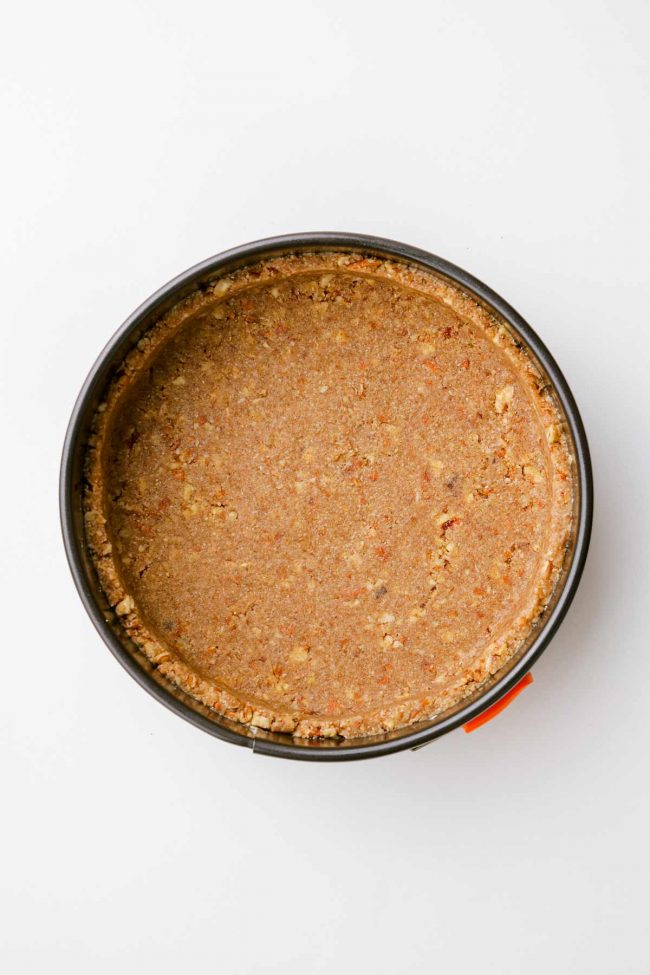 While the crust is cooling, mix the filling ingredients, except for the eggs, together.

Add the eggs, one at a time, and be careful not to overbeat. Overbeating can create cracks during baking.

Pour into the baked and partially cooled crust. 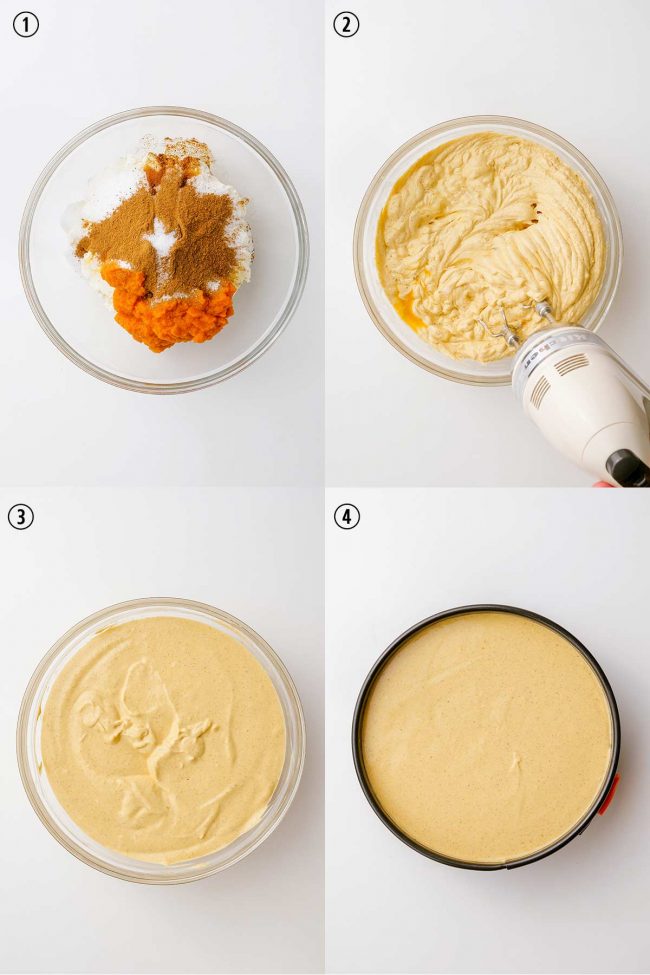 I’ve tried many, many other paleo, grain-free and keto “graham cracker crusts” and none of them really taste like the real thing. The reviewers of the recipes I tried were happy with the results, but I never was.

They were missing the crunch! And that’s what the pecans or walnuts are for. You just can’t omit them.

The crust stays surprisingly crisp. More crisp than any other grain-free crust I’ve tried (and I’ve probably tried about 60 since I started baking grain-free!).

I’ve only posted a few recipes with baked pie crusts for this reason. I’m super picky about pie crusts!

What’s monumentally stupid is that I spent about 7 years trying to find the perfect grain-free pie crust. I tried all the top-ranked ones.

Then I realized I already have a fantastic one. The one in my Mini Caramel Pecan Tarts! For some reason, I thought that that crust recipe couldn’t be made in a pie pan.

I’m very much a cookie pie crust kind of gal and while this pie crust isn’t a cookie crust, it’s got the equivalent of 1/3 cup of granulated sugar in it. So it’s at least sweet and not bland and just all around… bla. 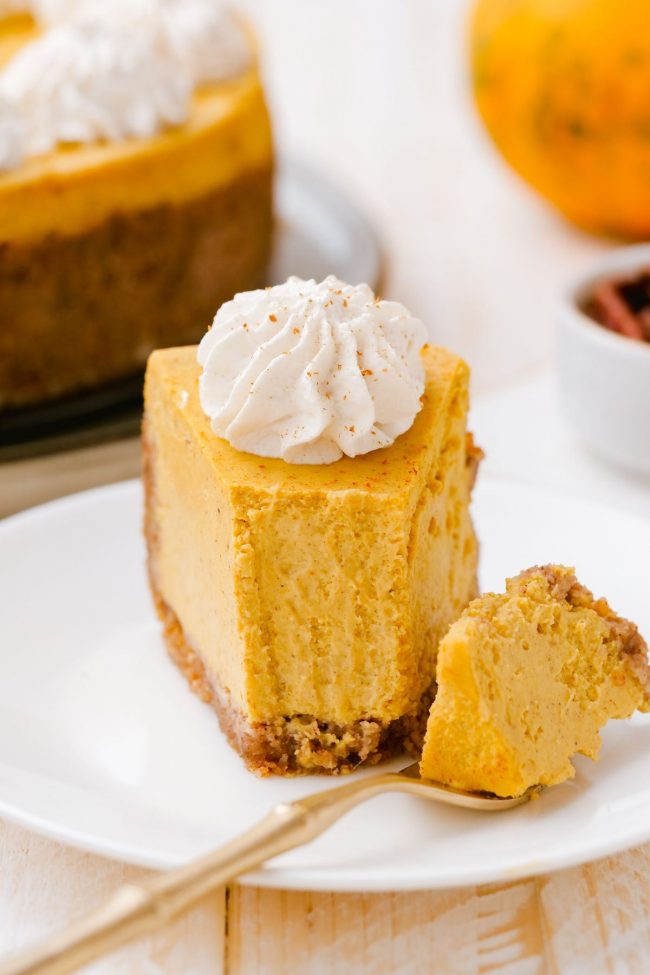 Like every other cheesecake, this is best made a day ahead of serving. It’s just less stressful to prepare it ahead of time.

But really, it’s so much easier to make it the day before so you don’t have to worry about it firming up quickly enough before cutting it.

You can even make this cheesecake now and put the whole thing in the freezer until the night before Thanksgiving. Then let it thaw in the fridge overnight so it’s ready to go!

You could also take it out in the morning and let it thaw at room temperature (although from a food safety view, in the fridge is safer).

Weirdly enough, the crust doesn’t get soggy. It stays dry and crisp. Especially so if you use Powdered Lakanto! 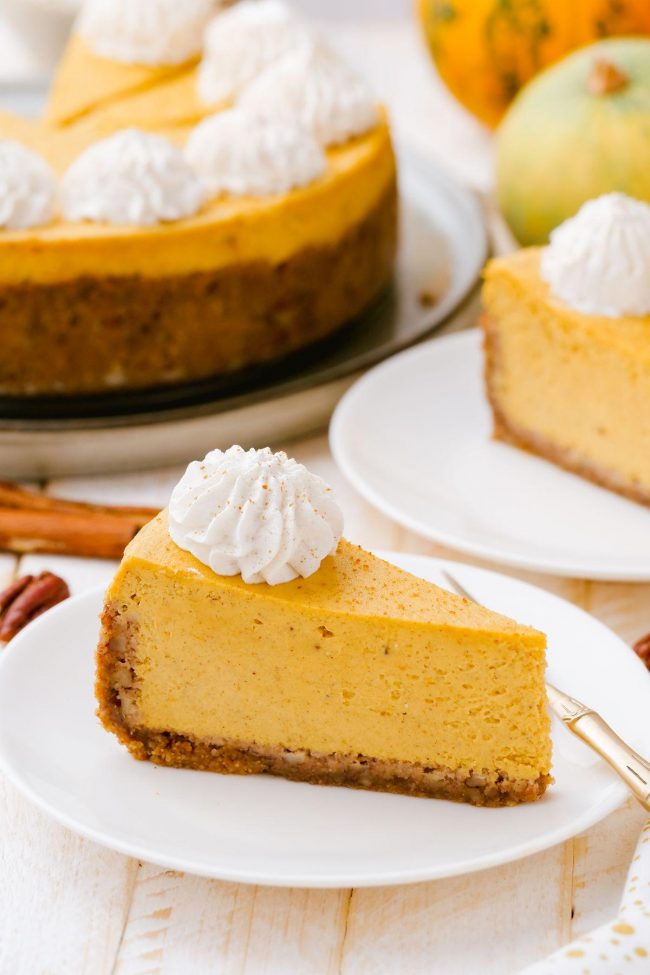 You can just skip this section if you live in the US or Canada! This recipe was tested multiple times with US ingredients, so this is only for the people who have to try to re-create US ingredients.

The filling was, as expected, a bit creamier with the US cream cheese than when using European Philadelphia brand (and every other brand cream cheese). The stuff here is more watery and not as creamy.

If you live outside of the US or Canada and have the type of cream cheese in little tubs which is meant to be spread on toast, this is what you need to do:

For 8 ounces (225 grams) of cream cheese, buy a 300-gram package (the stuff at Aldi, Lidl, etc. works just as well as Philadelphia), put it in the center of a clean tea towel or cheesecloth, and squeeze out the liquid until you have 225 grams of cream cheese.

The cheesecake is still amazing and super creamy! What you see in the photos is European cream cheese, using the above trick.

If you’re feeling lazy and couldn’t be bothered to get rid of the excess liquid, I wouldn’t recommend this recipe. The baking time will be totally different and you’re likely to over- or under-bake your cheesecake. I know because I have done this many, many times. 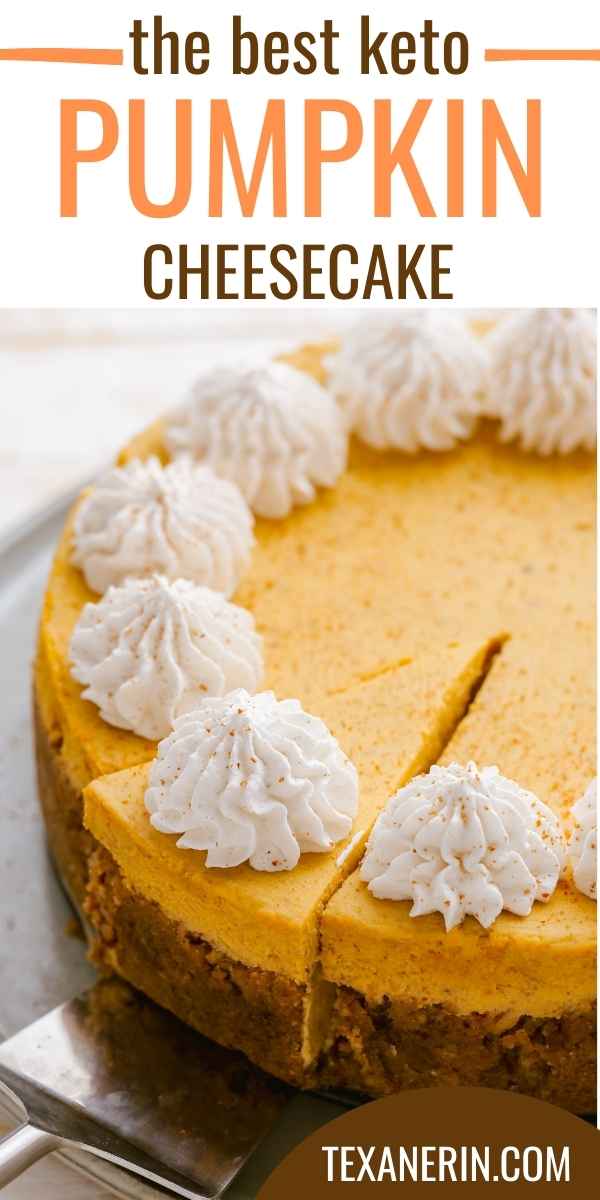 I’ve found that using European butter with its 82% fat is a disaster in crust recipes. It’s another reason why I rarely post pies recipes, cheesecakes and other things with baked butter-based crusts.

It works pretty much the same in this crust. If using European butter, just use 65 grams of butter instead of 70 plus 1 teaspoon of water. 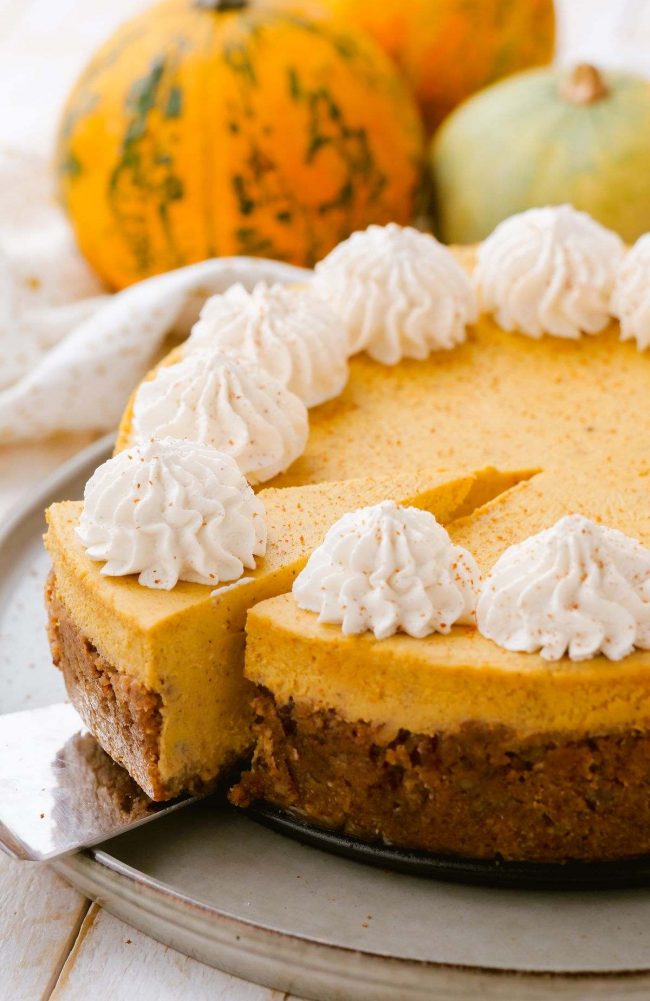 Here’s the label for 1/18th of the cheesecake, excluding whipped cream on top and using powdered Lakanto.

I stupidly wasn’t thinking about serving size when it came to the decorating (and therefore, the slicing) of the cheesecake. But your slice will be 2/3 the size of the slices in the photos. That’s still pretty decent for a keto dessert!

I looked at other keto cheesecake recipes and saw that they’re using 2/3 of the filling I do and state that it serves 12, so 18 slices seems to be correct. 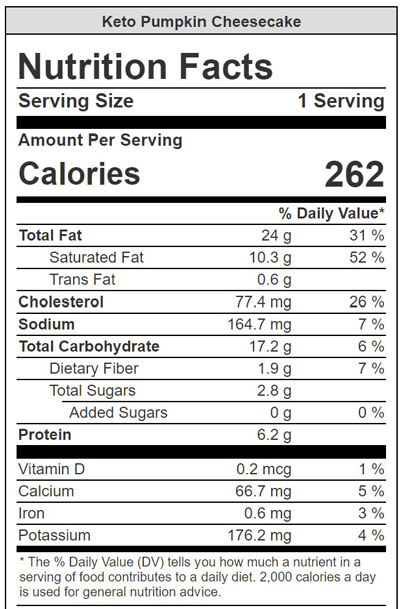 Questions about this keto pumpkin cheesecake?

That’s it! If you try this keto pumpkin cheesecake, I so want to hear about it! Leave a comment or snap a pic and tag #texanerin, so I can be sure to see it! 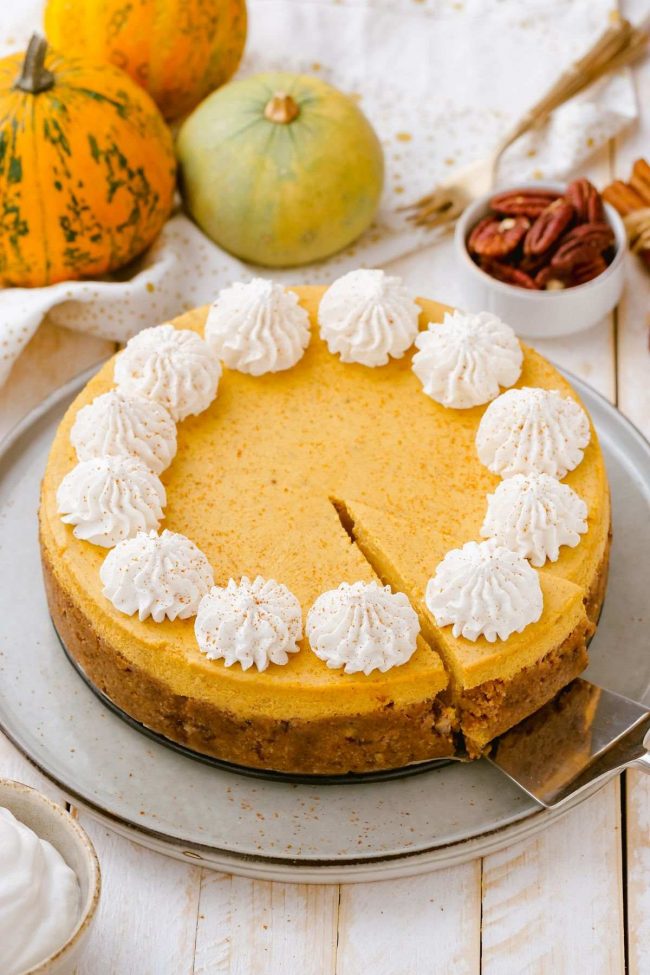 26 comments on “Keto Pumpkin Cheesecake (best ever! so creamy)” — Add one!