This vegan custard may be eggless but it’s thick, creamy and super flavorful and nobody will know it’s vegan! It’s absolutely perfect on pies, crisps and crumbles. With a paleo option.

This sure is a confusing term. Webster defines it as “a pudding-like, usually sweetened, mixture made with eggs and milk.”

It seems to mean a ton of different things and it differs depending on where you live.

Today’s recipe is a sauce meant to be poured over pies and other desserts. You could also call it crème anglaise or vanilla sauce.

I already have a paleo vegan vanilla sauce recipe. I really love it.

But that recipe requires a high-speed blender, which not everybody has, so here’s a recipe made on the stovetop.

When I first started testing vegan custard recipes, I thought they all tasted terrible. So I tried five or six from other blogs. I thought that they were bad, too.

Which is weird because most of them had good reviews. The texture was fine – I wasn’t doing anything wrong.

It was the taste. I think I discovered the issue with them!

If you use all sugar, then egg-free custard tastes like overly sugary thickened milk. Yuck.

If you use all maple syrup, you’ve got a strong maple flavor. Which I don’t think is a bad thing, but maple doesn’t fit every dish that you’d want to pour this custard on.

So in my recipe, you use half sugar and half maple syrup.

You can also use all sugar instead of maple + sugar. Or you can use all maple syrup for a paleo version. 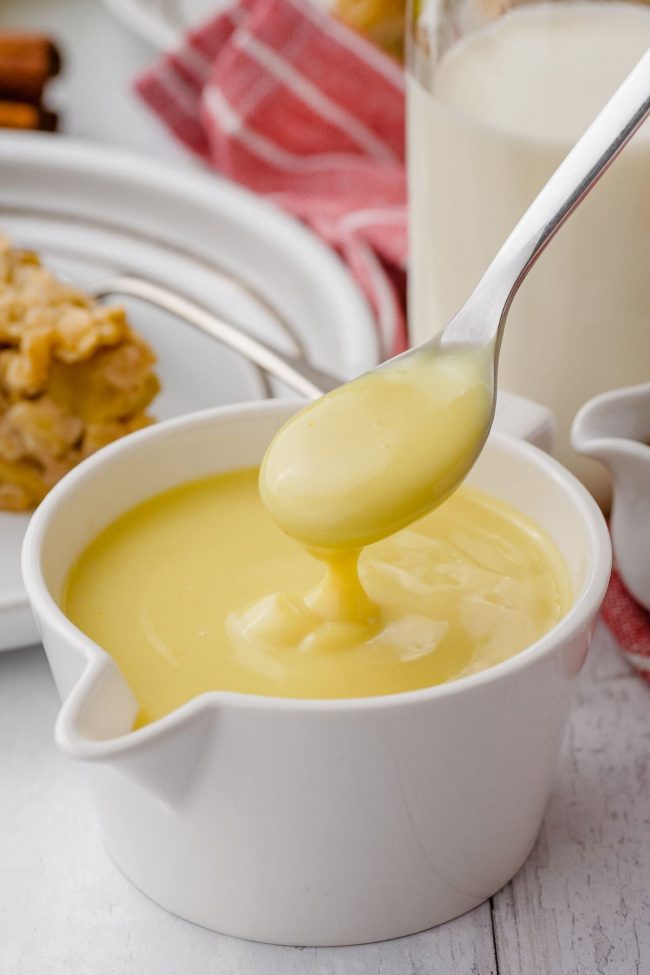 How to create an egg yolk color

Another thing that confused me in the 5-6 recipes that I tried is that they call for 1/8 teaspoon of turmeric to add color. Supposedly, you shouldn’t taste it at all.

With my expired turmeric, I could definitely taste the turmeric. So much so, that in one recipe, I couldn’t bring myself to eat it.

So my recipe calls for just a pinch of turmeric. I used the tines of a fork to add mine.

Add a tiny amount, taste, and add some more until you’re happy with the color, or until you get the tiniest hint that you’re starting to taste the turmeric.

Or just omit it! I can absolutely understand why you’d want a little bit of color to make it look “normal” but it doesn’t add anything to the taste – it’s just a visual thing. 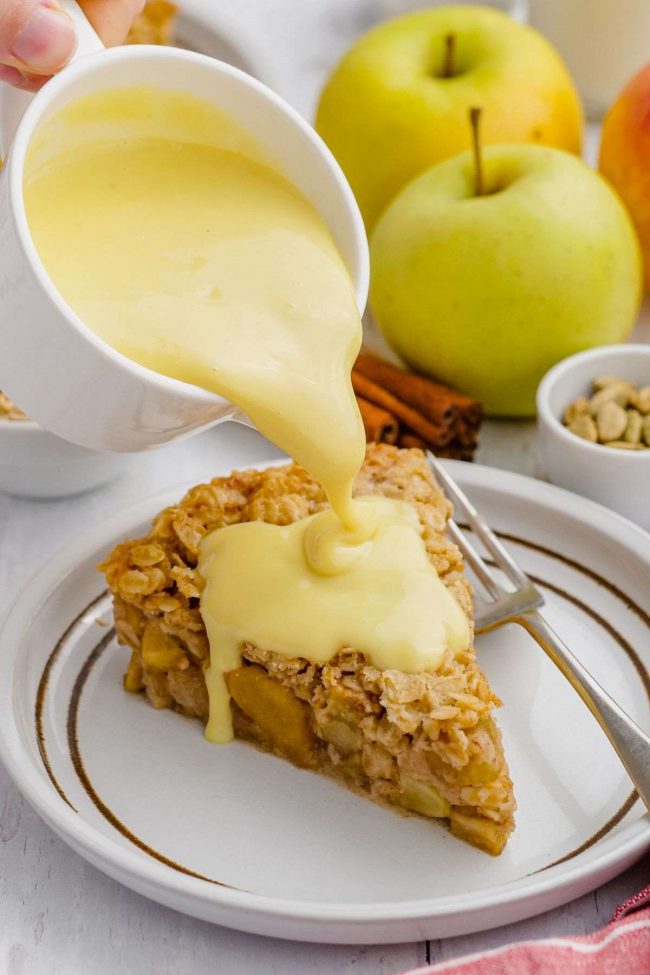 Which milk to use

During my custard experimentation, I thought the versions with almond milk were way too almondy. The result didn’t taste like custard.

A lot of people recommend soy milk but I don’t use it, so I have no idea how that’d work. I also tried oat milk but didn’t love that.

The tastiest blend of milk for this recipe, at least according to me, is canned coconut milk + cashew milk. 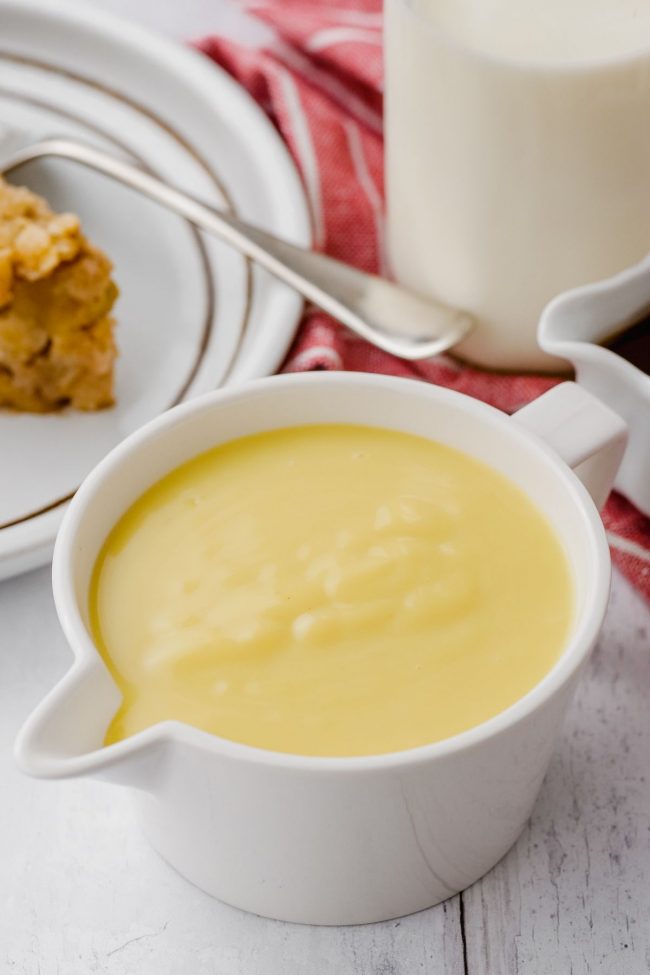 So I switched over to vanilla extract and when I made the below recipe, I found it to be just as delicious as with the beans.

If you prefer to use vanilla beans, you can use half of one. You’ll need to scrape out the seeds and put the seeds + bean pod in the milk, let it simmer a bit, and then add the 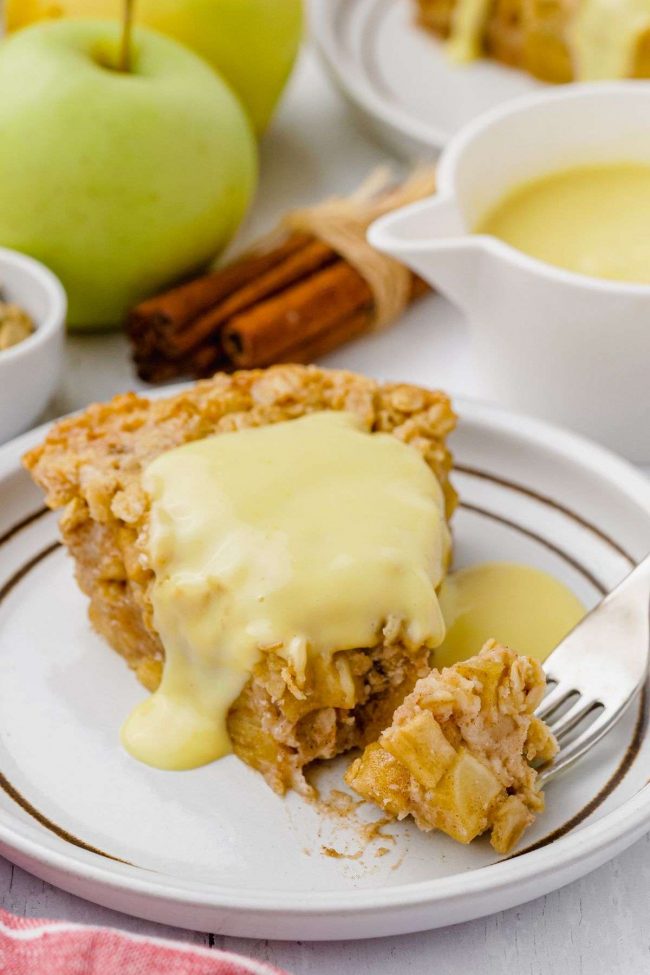 Which starch to use

The paleo vegan vanilla sauce I link to at the beginning of the post is starch-free. If you don’t want to use starch or want to use a different one other than tapioca starch, arrowroot starch or cornstarch, please check out that recipe.

I know people don’t want to use cornstarch so I tested a paleo alternative – tapioca flour / starch and arrowroot starch.

Some sources will tell you to use twice the amount of tapioca starch when using it in place of cornstarch.

I tried that and it was a gloopy mess. I had to add 6 tablespoons of cashew milk and it was still gloopy.

Then I tried it again, using 6 teaspoons instead of the 4 1/2 teaspoons called for if using cornstarch. That worked much better!

But note that you have to use all maple syrup. I haven’t tested a tapioca / arrowroot + half sugar / half maple version.

I think it’d work just fine but haven’t tried it. If it turns out too thick, just add a little milk when it’s done cooking.

At least in the pan. It was weird. Once we poured it over our desserts, we didn’t notice the difference.

If you’re trying to impress someone, I’d probably go with the cashew-based vanilla sauce. There’s no weird at all there!

Also note that the paleo, all-maple version is browner than the version that uses half maple syrup. You’re not going to get as nice of a yellowish color. 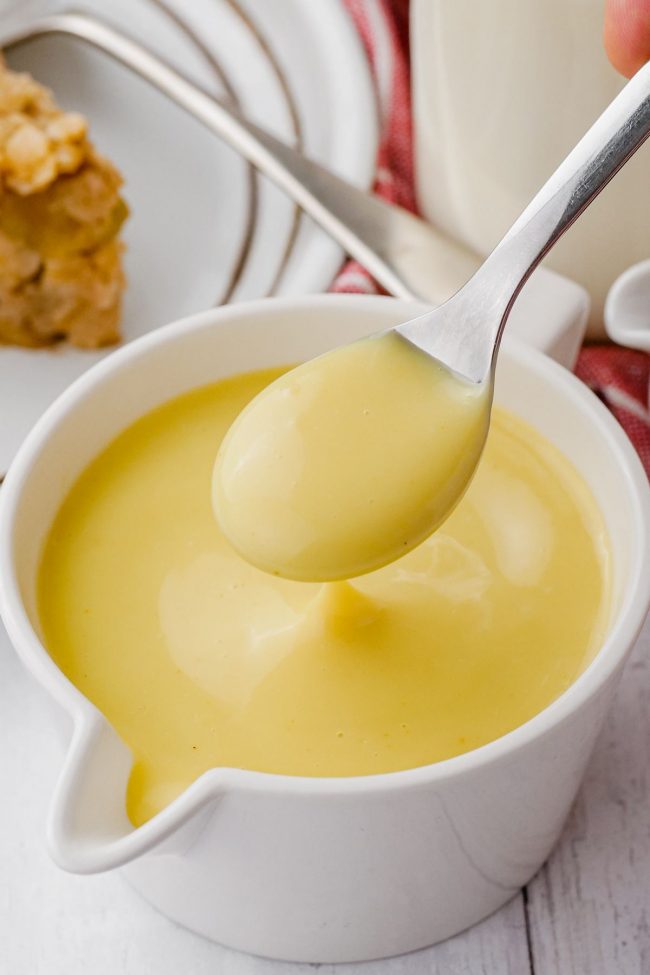 What not to do with this custard

Like I mentioned in my post on gluten-free pudding, do not taste the custard and then put that dirty spoon back into the pan! The enzymes in the saliva will cause custard to become runny.

It won’t happen straight away but rather minutes or hours later. You’ll open the fridge door to take out your delicious vanilla custard and find that it’s now a soupy mess.

Also, ignore the video where the cornstarch and cashew milk are first mixed together in a little bowl. I apparently was not thinking by involving an extra bowl.

Just mix it together in the pot and then add the other ingredients.

What does this custard go with?

It’s delicious enough to eat with a spoon but if you want to be a bit more sensible, try it on any of these gluten-free + vegan recipes: 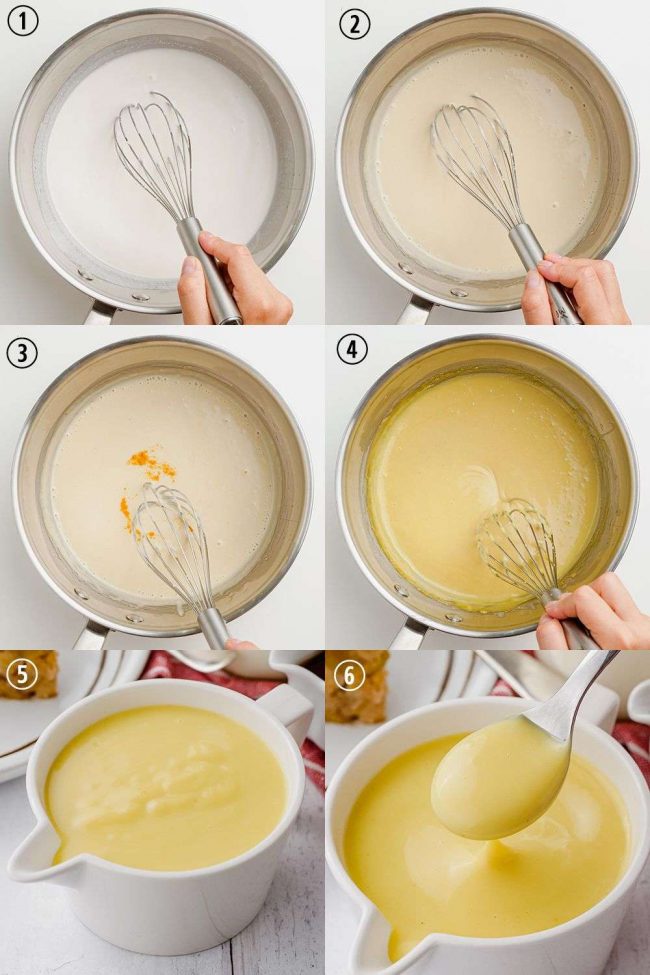 If you try out this recipe, I’d love to hear how you like it!

Questions about this custard?

This vegan custard may be eggless but it's thick, creamy and super flavorful and nobody will know it's vegan. With a paleo option.