These eggless brownies might be the gooiest brownies ever, and they don’t use any odd egg subs! You just need Greek yogurt, which adds an amazing taste to the brownies. They’re perfectly rich and chocolaty and can be made with all-purpose, whole wheat or gluten-free flour.

I only have one other eggless brownie recipe on the blog – these Paleo Vegan Brownies. And I know that unless you’re paleo and vegan, you’re probably not going to make them as you likely don’t have almond flour, coconut sugar and ground chia seeds sitting around.

By the way, has anyone made them?! I’ve worked harder on that recipe than any other on the blog and have gotten zero feedback on it. So if you have made them, I would be super thankful if you could leave a review on the recipe. :) 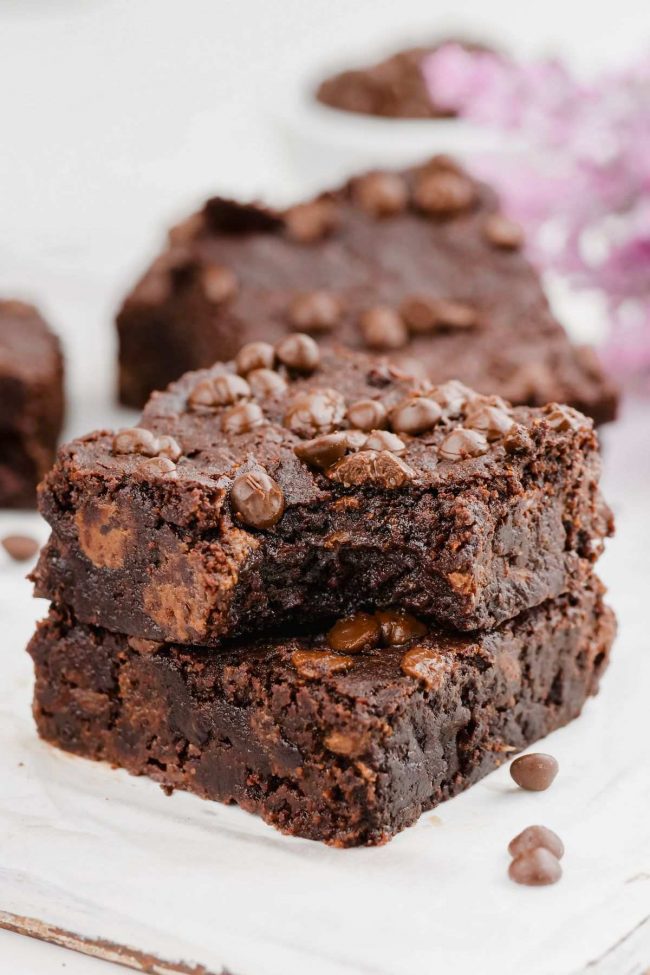 So to help out the folks who just want some brownies without eggs – and who don’t care about gluten (although there is a gluten-free option for this recipe) and dairy – this recipe is for you!

And I have to say – I actually prefer this version over the egg-containing version! Today’s recipe is based on my Gluten-free Brownies recipe (which can also be made with regular and whole wheat, in case you’re interested!).

Why do I prefer these? The Greek yogurt adds a really nice taste, kind of tangy, but not really. That’s a pretty terrible description, I know. I guess you’ll just have to try them. :)

These are your basic cocoa powder-based brownie ingredients, with Greek yogurt in place of the eggs. 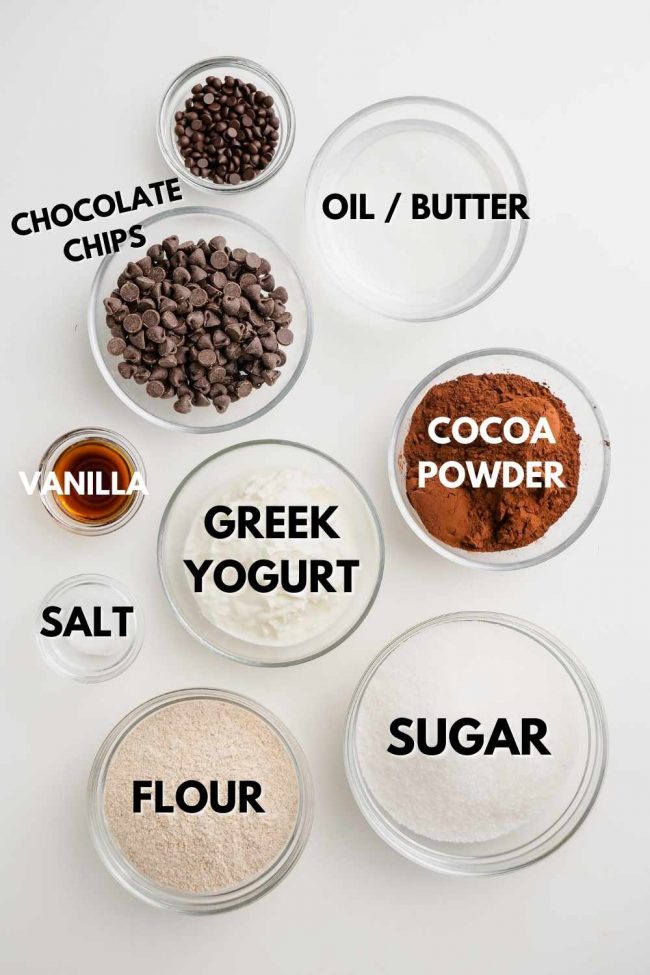 To be honest, I thought these brownies would be terrible before I made them. I’d tried other eggless brownies recipes, and the ones with Greek yogurt resulted in a gummy, rubbery and just plain nasty texture. Or they were cakey.

If you google “eggless brownies” and look at images, you’ll see that a lot of them even look like that. Or cakey!

A ton of Greek yogurt brownie recipes are cakey. I know some people prefer cakey brownies, but I really don’t need those in my life. ;)

So I’m super happy to be sharing this recipe with you today! I feel like they are the gooiest, most normal eggless brownies out there. :D

Unfortunately, you can’t really see it in the photos. They were soo gooey that the photographer had to chill them to get them in a neat stack. 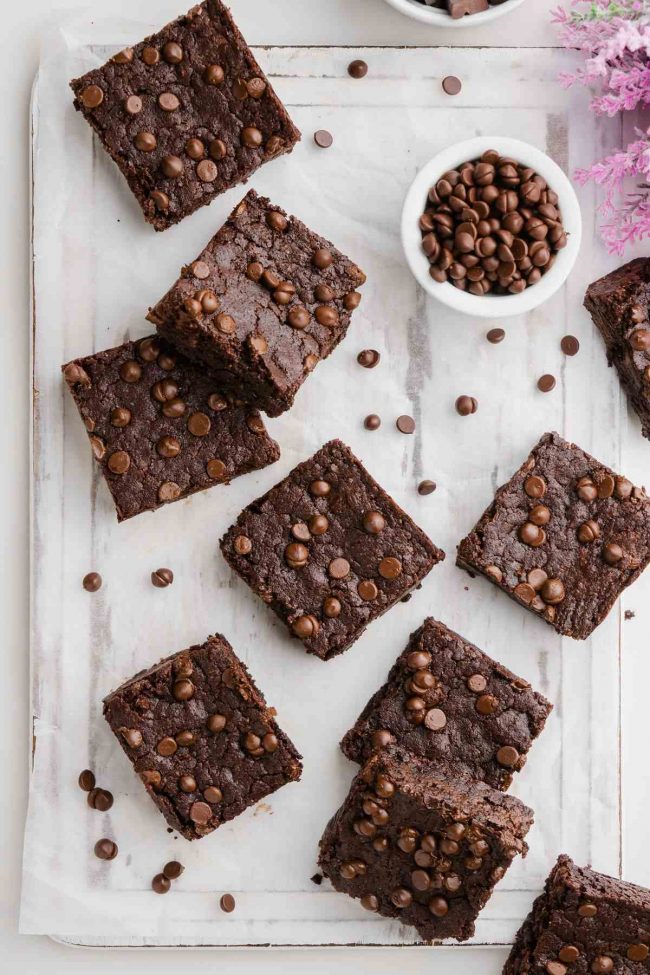 Do I have to use Greek yogurt?

Yes, as it’s so much thicker and richer than regular yogurt! And please use full-fat.

The fat in the yogurt is necessary. The original recipe I based these egg-free brownies on uses 14 tablespoons of oil. If you use that amount of oil in this recipe, you’ll find your brownies swimming in oil.

I had to reduce the oil to 2/3 cup, or by 3 tablespoons + 1 teaspoon. That’s not an insignificant reduction.

I did try them using 2% fat Greek yogurt + 2/3 cup oil. The first time I did that, I baked them for 20 minutes, as it says in the recipe, and I thought that they were dry and cakey.

Then I tried them again with 2/3 cup and… that was indeed the right amount. I had overbaked them.

I was also thrown off because they looked pretty different than the full-fat version. The top of the low-fat version looks almost exactly like when you put them in the oven, except not wet-looking. So they don’t have those nice crackles that you see in the photos. 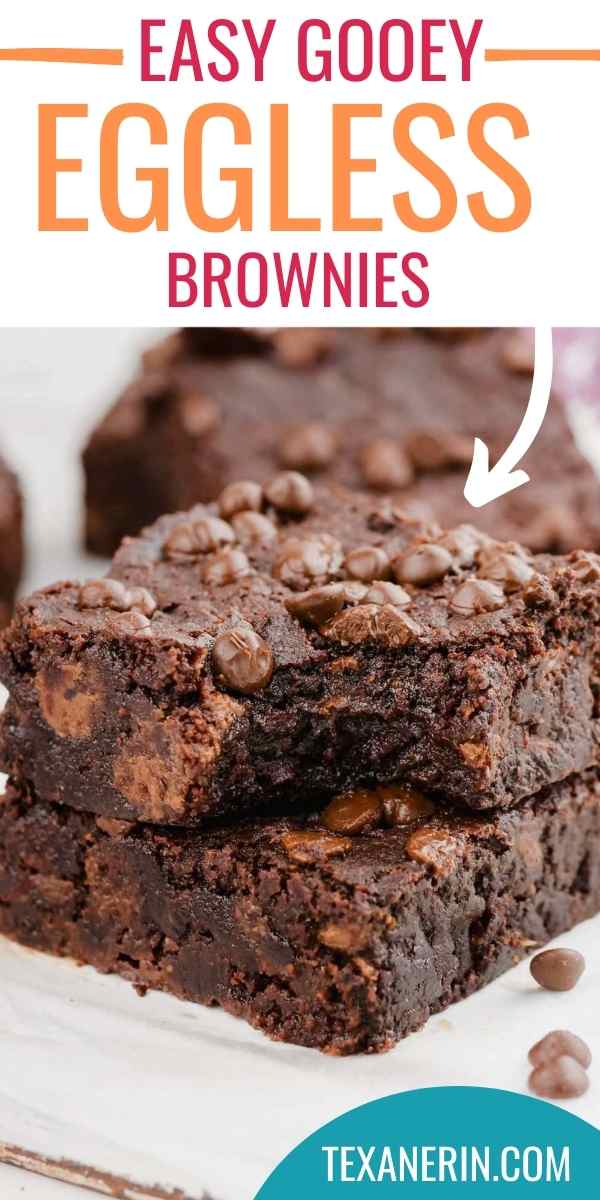 What about vanilla Greek yogurt?

If there’s just a tiny bit of sweetener in your vanilla Greek yogurt, I think it’d be fine. But note that these brownies are already perfectly sweet. If you add even more sweetener, the brownies might be too sweet.

Can I use vegan / dairy-free yogurt?

I sure wish you could so I could offer a vegan option on these! But I’ve never found a vegan yogurt that’s as thick as full-fat Greek yogurt.

If you have access to one, let me know how it works out! I’d love to add a note to the recipe for the other vegan readers. 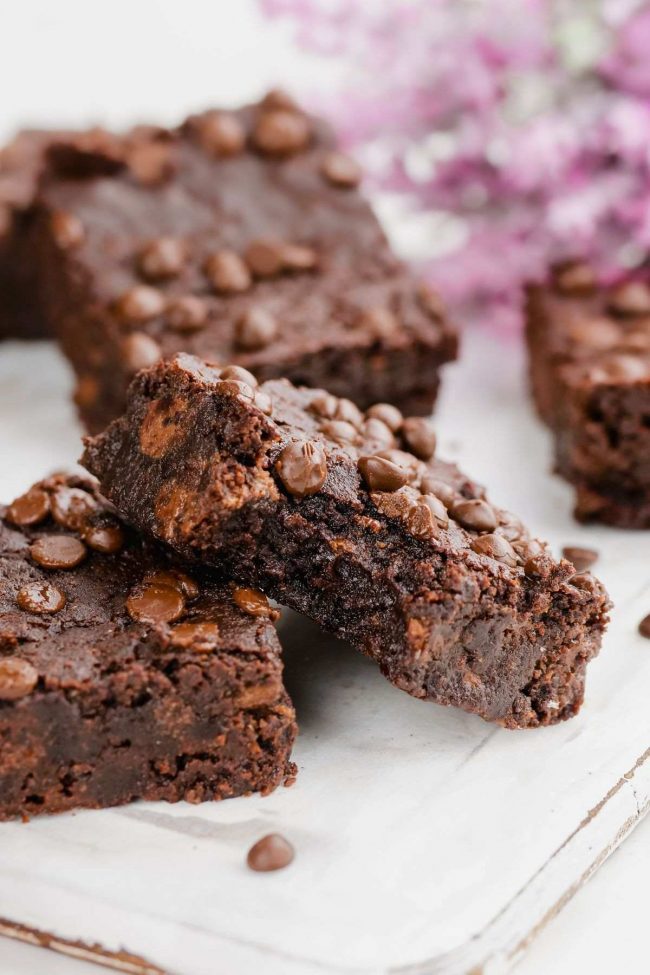 Can I use eggs in place of the Greek yogurt?

If you want to do that, please see the original recipe (linked to at the beginning of the recipe).

Can I use X type of flour?

Other gluten-free baking mixes might work, but I can’t say for sure without trying them.

Almond flour, coconut flour, and other alternative flour will not work in this recipe. You need to use something that’s a 100% sub for all-purpose flour.

That’s okay. So did mine.

When you mix the dry and wet ingredients together, it’ll form a big greasy-looking lump. Definitely not your normal-looking brownie batter!

But as long as the coconut oil is combined and not floating at the top, they’ll be fine. Stir until the oil is incorporated, but not vigorously. You don’t want to overmix brownies! 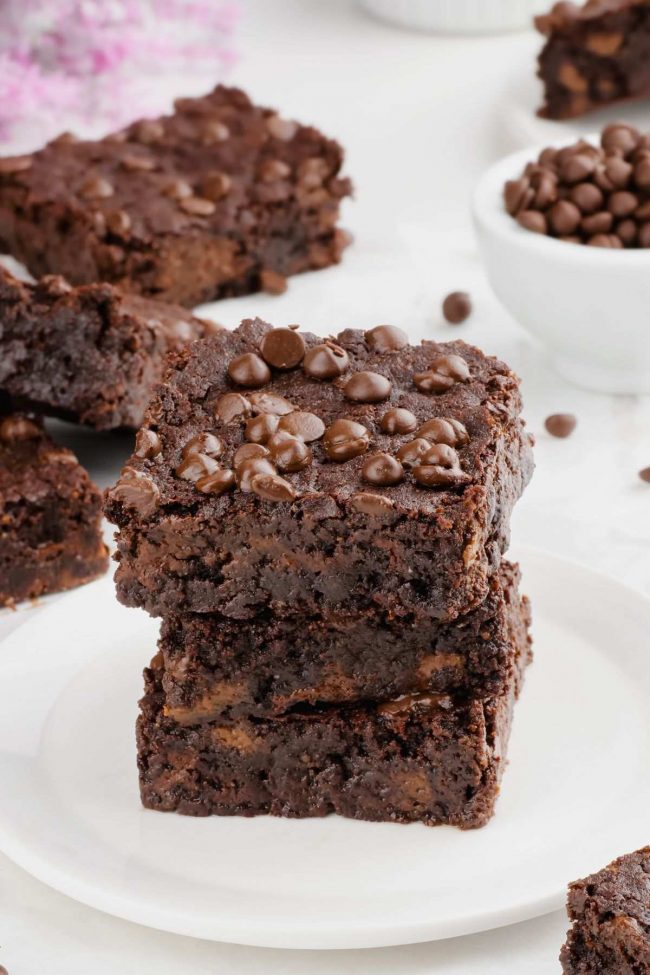 More questions about these brownies? 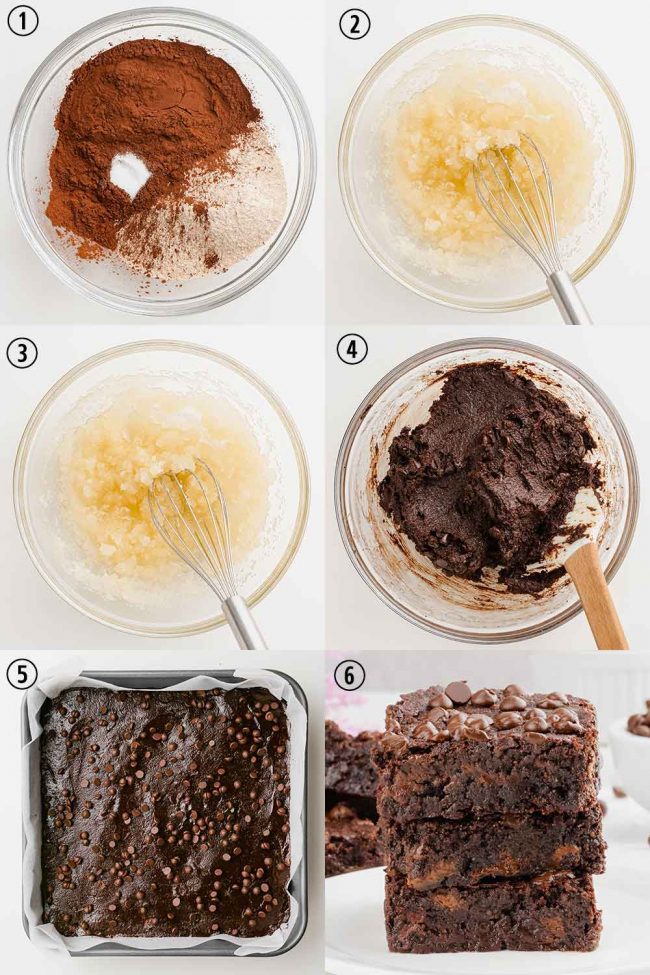 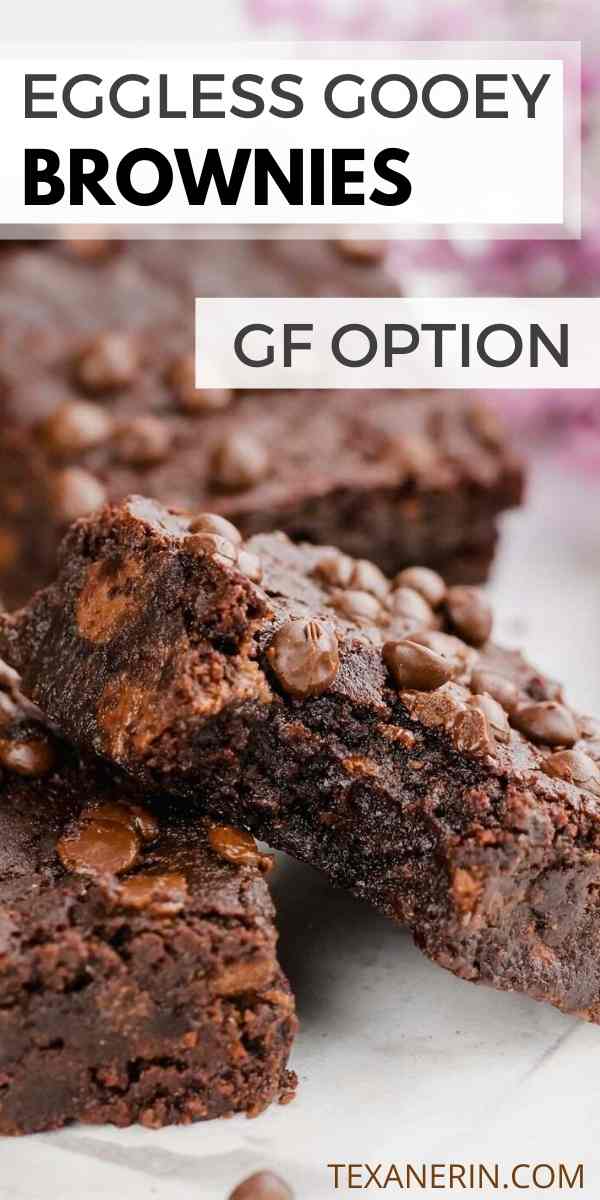