This recipe comes from the German equivalent of Allrecipes, which is called Chefkoch. I made a few changes, like using vanilla extract in place of lemon juice, adding vanilla extract and adding salt, but other than that, it’s the original German recipe.

I thought I’d start my post with that tidbit because there’s another blogger (or actually, several) who used the Chefkoch recipe in her post. But she didn’t credit Chefkoch and I don’t want people to think I copied this other blogger. It’s the most popular and highly-reviewed recipe when you google Mandelhörnchen, so it’s the one I used. 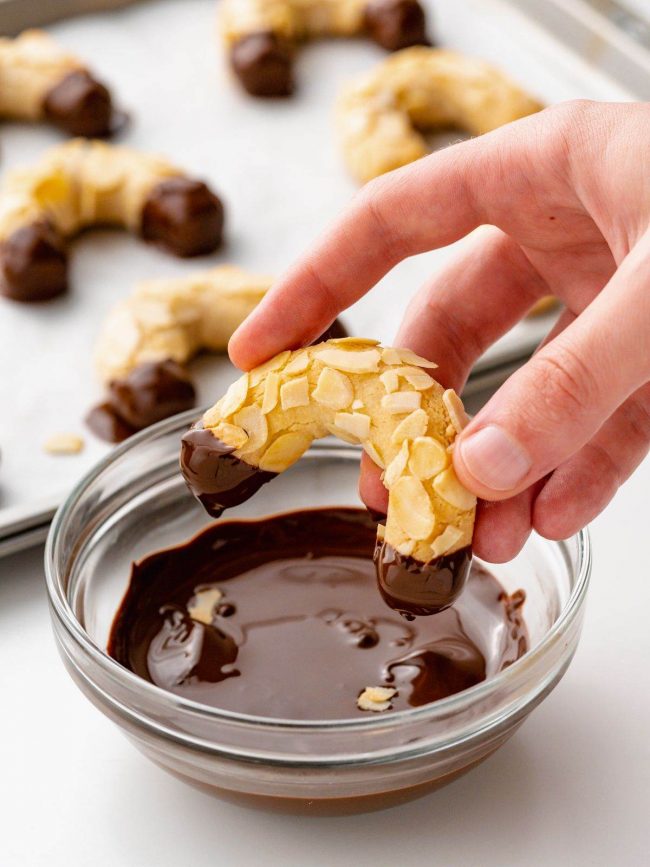 Anyway. I personally find German cookies to be quite bland. Yes, they use less fat and less sugar than American cookies but the trade-off is less flavor.

But with the almond/vanilla extracts and the chocolate, these are some super flavorful cookies. They’re also not low in sugar. The result is definitely my favorite German cookie recipe!

And I think they’re quite impressive looking. I’m guessing that a tray of these cookies along with my other almond paste cookies, these pignoli cookies, would be the hit of any cookie exchange (which I guess aren’t really happening this year, but hopefully next!). These chewy gingerbread cookies, molasses cookies and peanut butter cookies would also be a great addition.

They’re crescent-shaped, almond paste-based cookies that are covered in sliced almonds. The ends are dipped in chocolate.

They’re dense, perfectly chewy and similar to marzipan cookies. You can find them all over Germany, and they’re especially popular for Christmas. 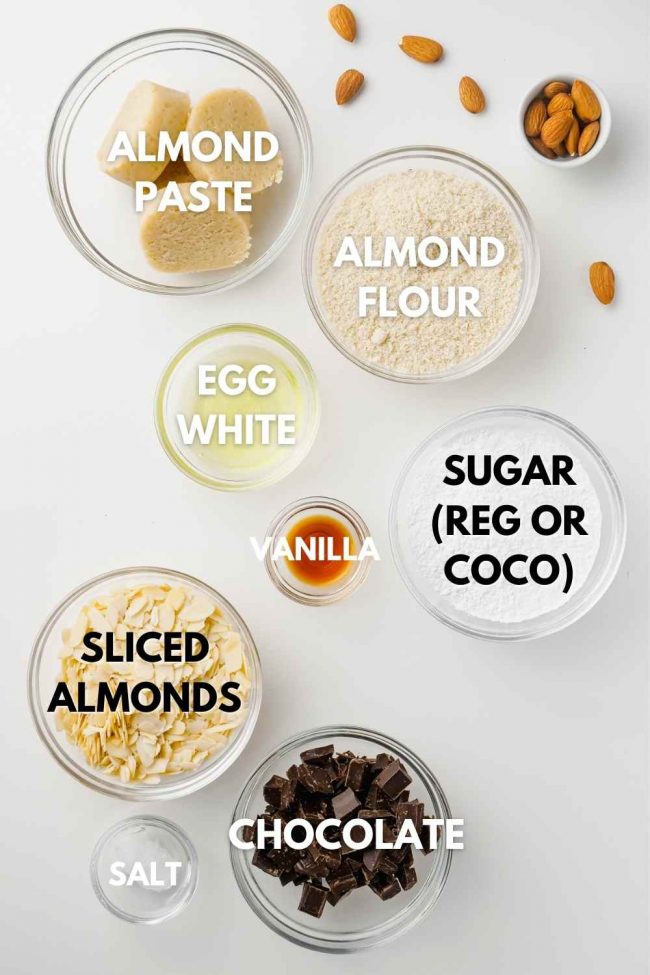 With or without almond paste

Like the pignoli cookies, this recipe can be made with this homemade almond paste recipe, with store-bought almond paste or you can make the version without almond paste, which you find in the notes below the recipe.

If you use store-bought almond paste, you need 1 package. If you use homemade, then you need 1/2 of the batch.

The almond paste recipe calls for 1 egg white, so you, unfortunately, can’t just make a half batch of the almond paste. Or, well, you can, but then you need to measure out 16 grams of egg white. It’s not that hard and something I’ve done countless times recently but still, a bit of a pain.

It’s better to just make the whole batch of almond paste and then freeze the rest for later. 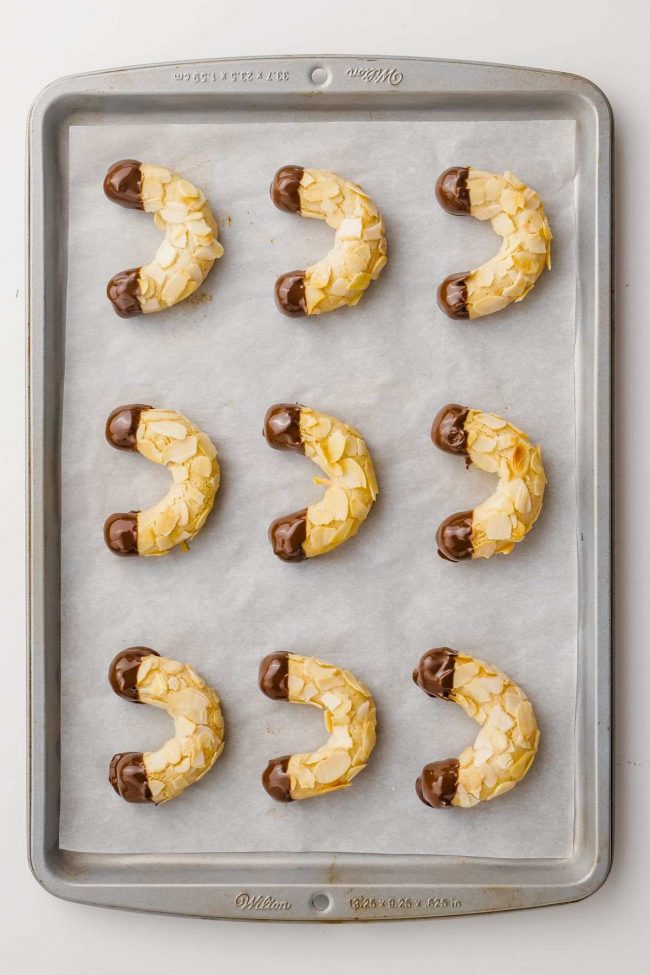 The version without almond paste

If you go the almond paste route, you’d need 1 1/2 eggs whites to make the cookies from scratch. That’s also annoying to measure and you’d be leftover with 1 1/2 egg yolks. So for the almond paste-less version, I used 1 egg + 1 egg yolk and used the leftover egg white to brush over the cookies.

That helps the almonds stick. It worked great! You don’t need nearly the whole egg white, so you’ll still be leftover with some egg white, but at least the measurements are easy. 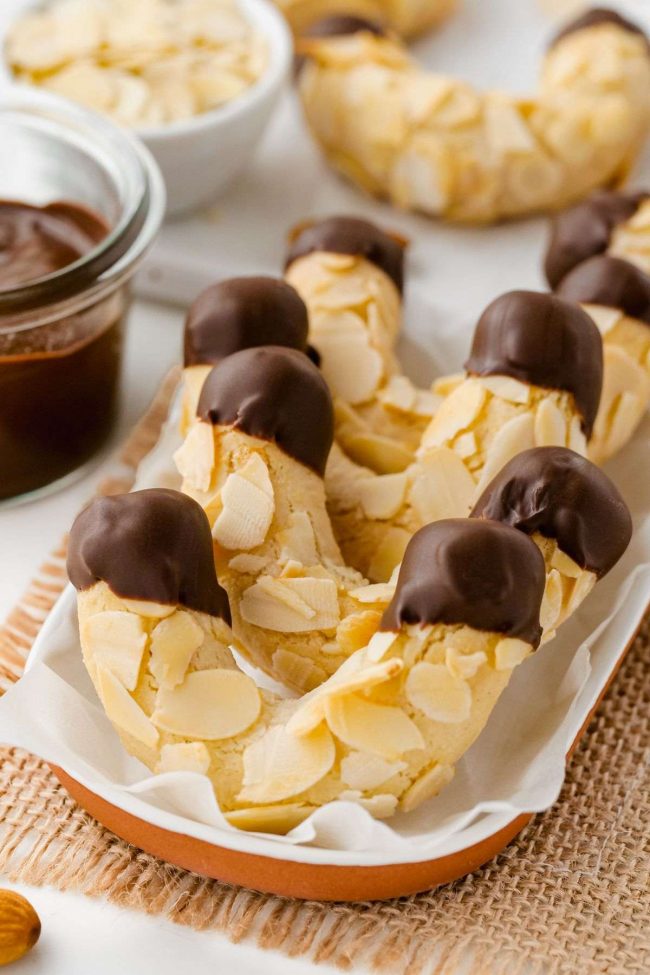 For the paleo version, you make the almond paste-free version, and just use coconut sugar in place of the powdered sugar. And the texture is just as good! They’re wonderfully chewy.

I do recommend using a little more almond extract, though. Like I said in the pignoli cookie recipe, I was surprised that coconut sugar works well in an almond-flavored recipe. But a little extra almond extract helps.

But they don’t really taste all that less sweet than the regular version. I would say that they’re an excellent paleo Christmas cookie option! As are these chai spiced cookies, paleo gingerbread men cookies and paleo double chocolate cookies.

Because coconut sugar is so much darker than powdered sugar, the cookies are much darker in color. Here’s what the paleo version looks like. I hadn’t intended on taking photos and don’t care what our cookies look like so pardon the terrible looking cookies and photos. 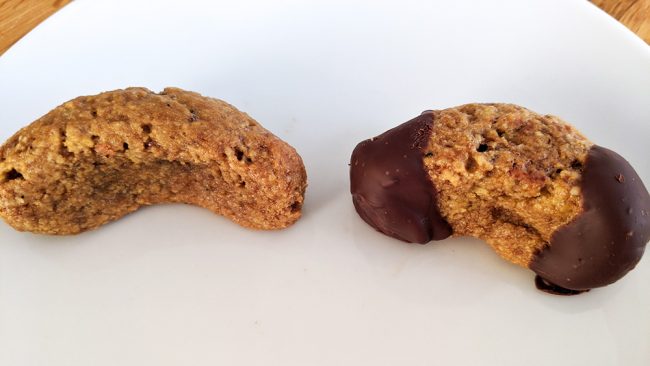 I was about to hit publish when I figured it wasn’t very nice of me to not offer a vegan option. I had thought it was pointless to even try.

But I just tried with chia eggs and it worked perfectly. In the almond paste-free version and the paleo version.

I didn’t bother brushing the tops of the crescents with chia eggs because I didn’t think it was needed. The dough was stickier than the other non-vegan versions and this allowed the sliced almonds to stick to the dough.

Without the egg white wash, the cookies are more fragile but super tasty and the texture just the same. 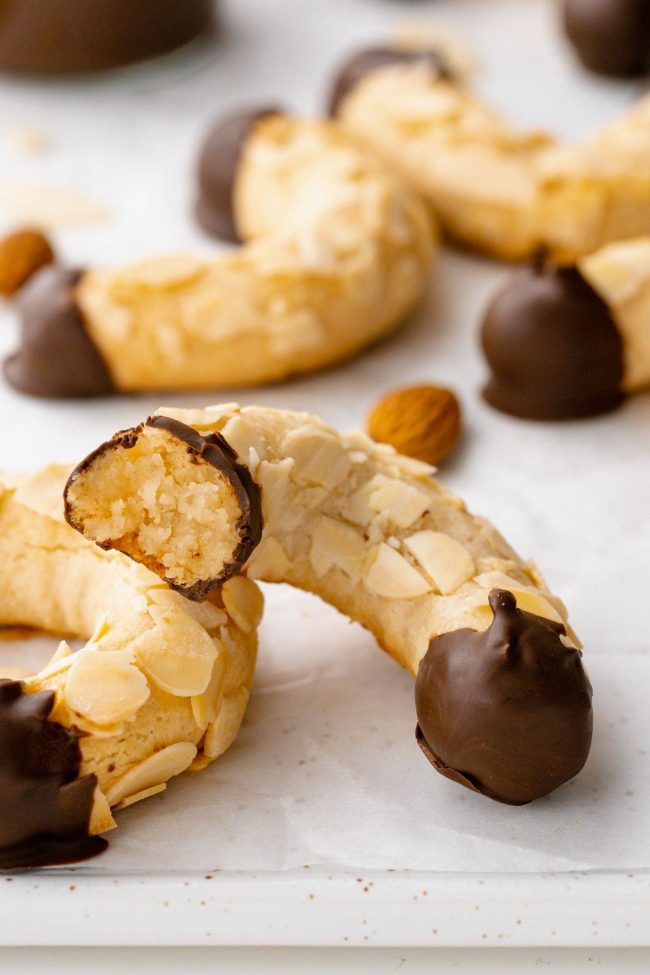 A perfect make-ahead or send in the mail cookie

One really great thing about these cookies is that they last for several weeks. So if you want to send cookies in the mail or give these to your mailman but you don’t know when you’ll see him next (our current situation!), this is your recipe.

And they’re not fragile, even with the almonds. Sure, some almonds might break but the cookies themselves are very sturdy. I’m not sure about sending the vegan version, though, since they’re not as sturdy.

While you’re at it, these candied almonds and candied pecans would also be a great treat to send in the mail. 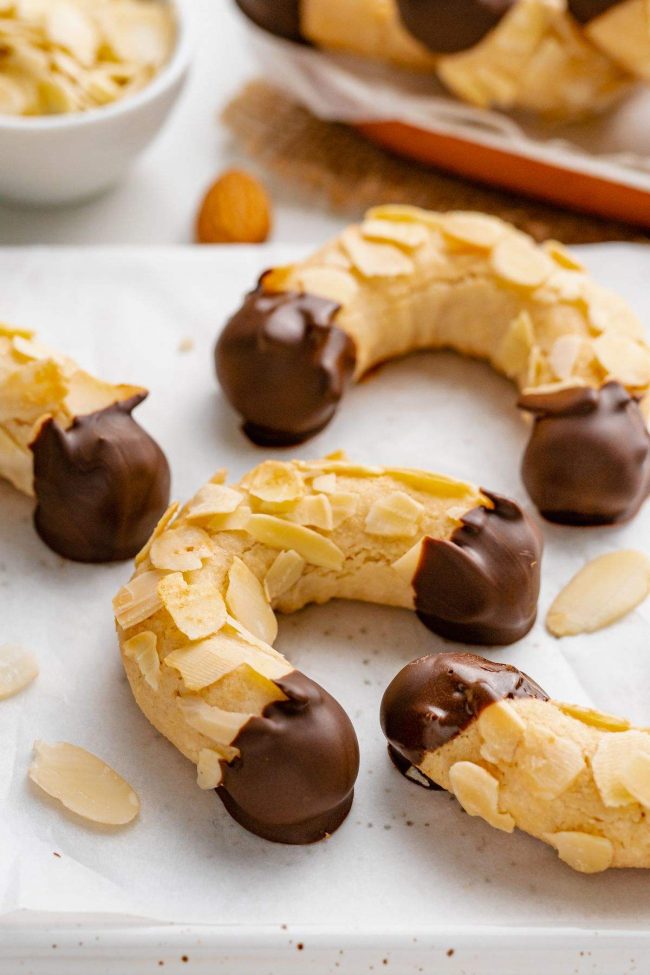 A few notes on the ingredients

Make sure to use finely ground blanched almond flour. If you don’t, your dough will be sticky and hard to manage and the cookies will spread too much.

Also, note that almond flour may be called ground almonds in your country. You don’t want to use deoiled/defatted almond flour, which is what ‘almond flour’ is in the UK, Germany and several other countries outside of the US.

If you live outside of the US, weigh your eggs. 30-32 grams is the correct amount for 1 egg white. In Germany, I always use medium eggs in place of large eggs if the recipe is from the US.

In the US, a large egg = 50 grams and in Germany, a medium egg = 50 grams. So weigh those eggs! And don’t worry – my recipes are written for a US audience. So when I say large egg, I mean a US large egg.

Read the questions section below if you’re thinking of making any changes at all to the recipe. :) 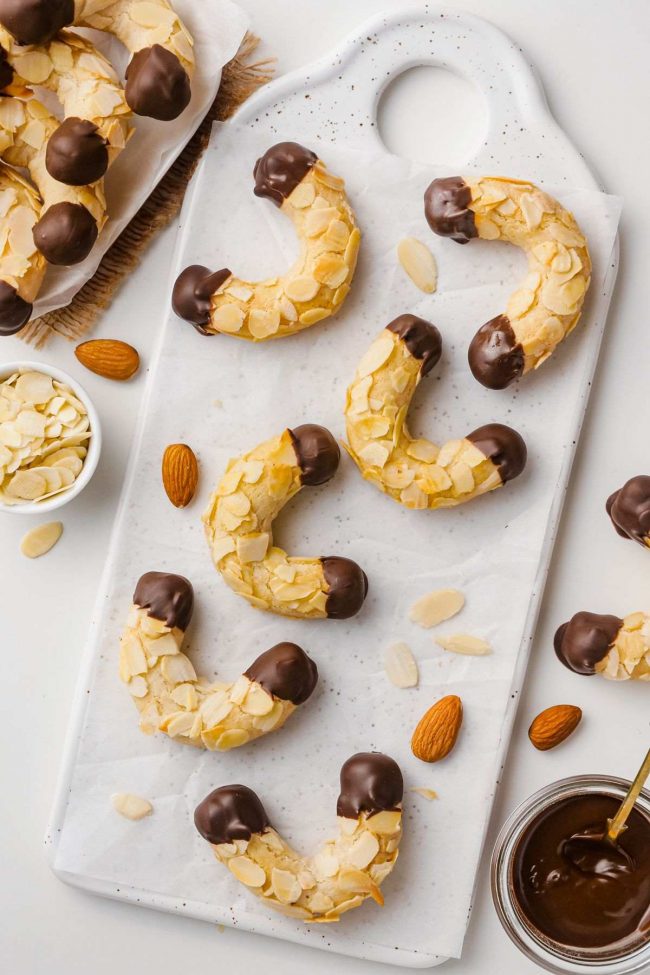 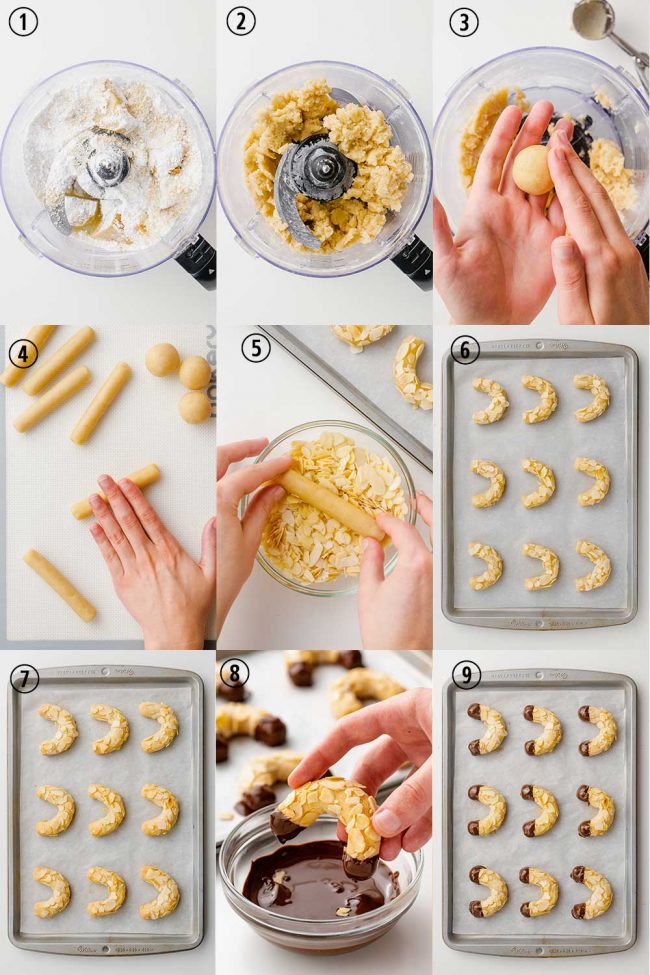 If you give these almond paste cookies a try, let me know how they turn out for you! 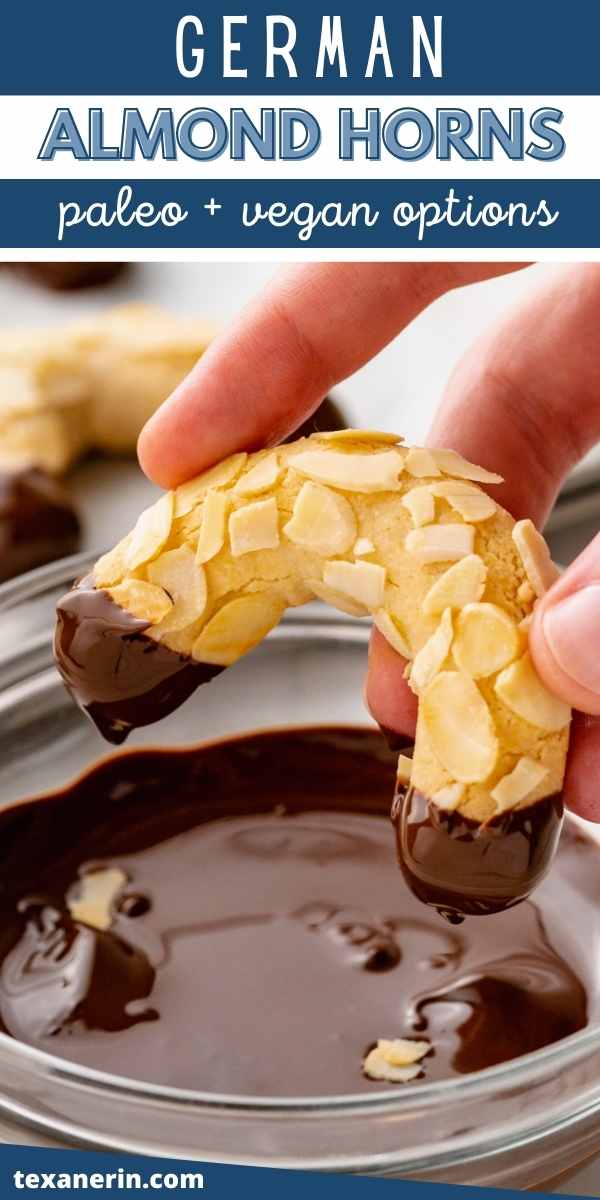 For the paleo and version without almond paste, see the notes below the recipe.

If using a food processor:

If not using a food processor: