This Crustless Pumpkin Pie couldn’t be any easier. It’s creamy, rich and full of flavor. There’s also no flour in it, making it naturally gluten-free. There are also options to make it keto and paleo.

I’m one of those people who think that pumpkin pie crusts are entirely useless and boring. I’m all about cookie pie crusts!

I’ve tried for years (nine, to be exact 🤦‍♀️) to come up with a great cookie pie crust for pumpkin pie. It’s hard, though. 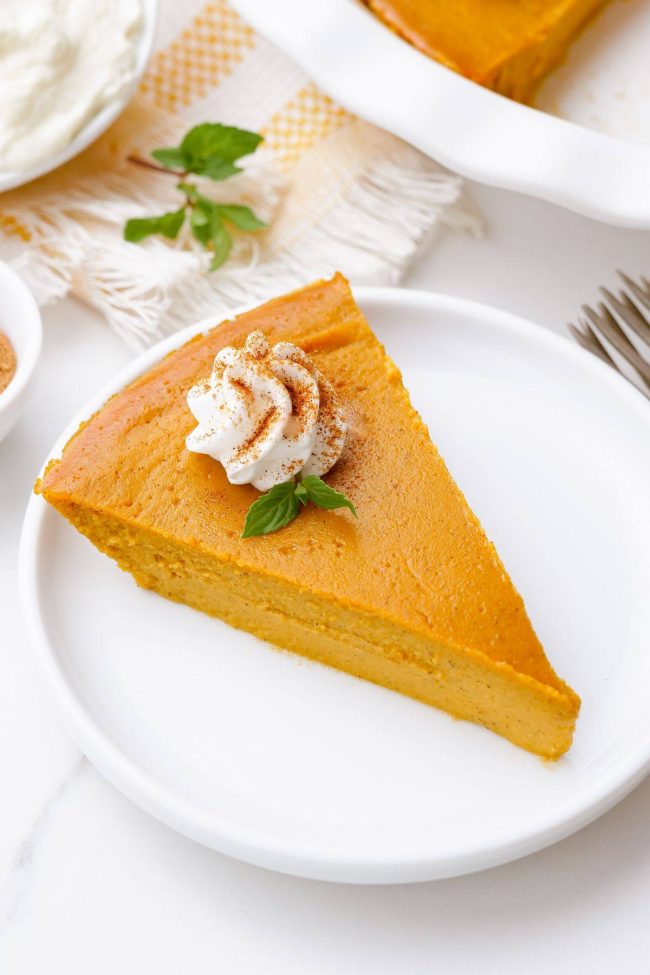 I work on it every year and thought I finally nailed it this year, but then I decided it was just too sweet.

My solution – just skip the crust and make this crustless pumpkin pie!

Pie crust is often a pain to make and often gets soggy under the pumpkin pie filling.

If you’ve been tasked with bringing something to Thanksgiving dinner and you’re not much of a baker, go with this easy recipe! Or these Pumpkin Cupcakes, which are also super duper easy.

And it takes a fraction of the time to make pumpkin pie when you ditch the crust. 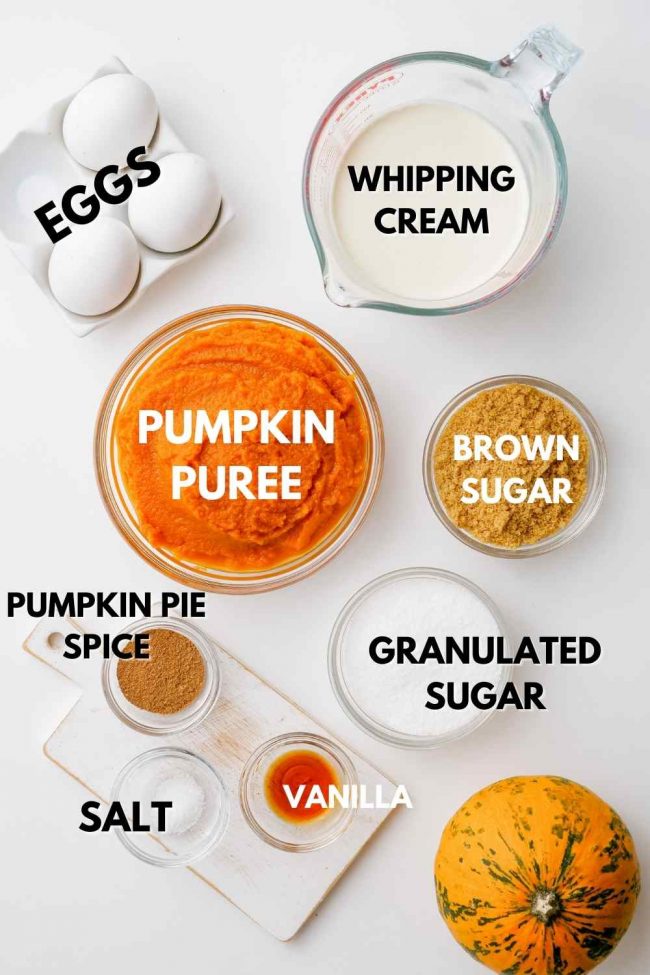 For traditional pumpkin pies, you usually just mix all the filling ingredients together and pour it into the crust.

I would suggest not doing it that way for this crustless pumpkin pie, but rather following the recipe because there’s a key step to making it thick and luscious. And it’ll add 7-8 minutes to the prep time, but it is so worth it.

You heat everything, except for the cream and eggs, on the stovetop and stir for 5 minutes. This helps reduce the moisture, making it ultra silky.

Have I tried this pie without doing that step first? No, I haven’t.

Because I can see the moisture evaporating from the pot, and I know I don’t want that in my pie, which would just make it soggy. 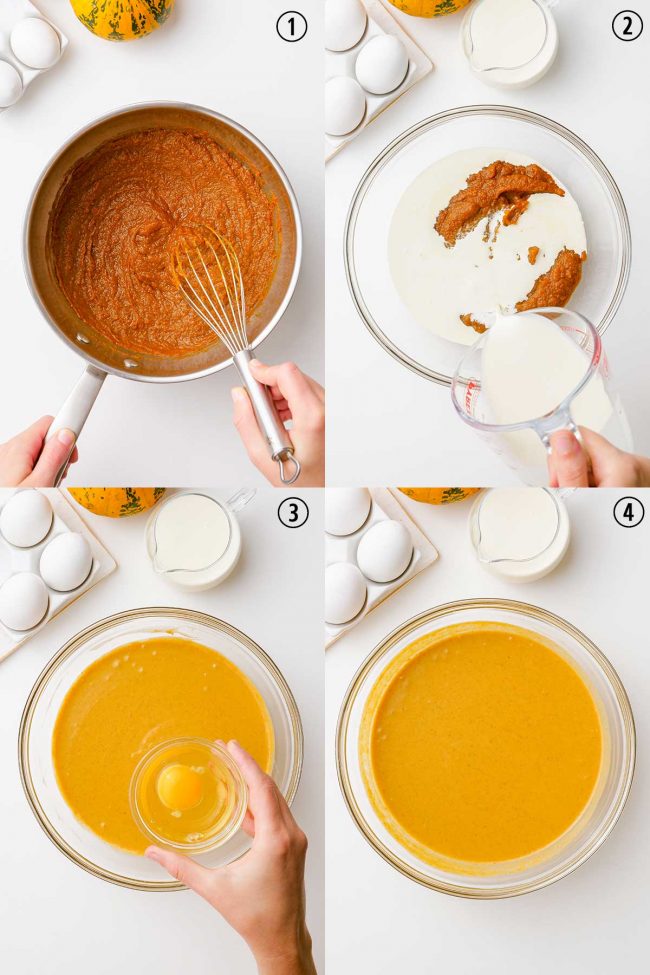 Can I add a crust?

The filling just fits in a 9″ pie pan. If you use a deep-dish pie pan, you’d have space to add a crust.

How long you’d need to bake the pie for and whether or not you pre-bake the crust depends entirely on your crust recipe.

It must cool first!

Out of the oven, the pie won’t have the right texture. When you dig in, it may appear watery or even appear a bit curdled.

It’ll also be impossible to cut.

Cooling and chilling transforms the pie into a creamy crustless pumpkin pie.

So plan ahead. Also, look at how perfectly it comes out! No cracks. 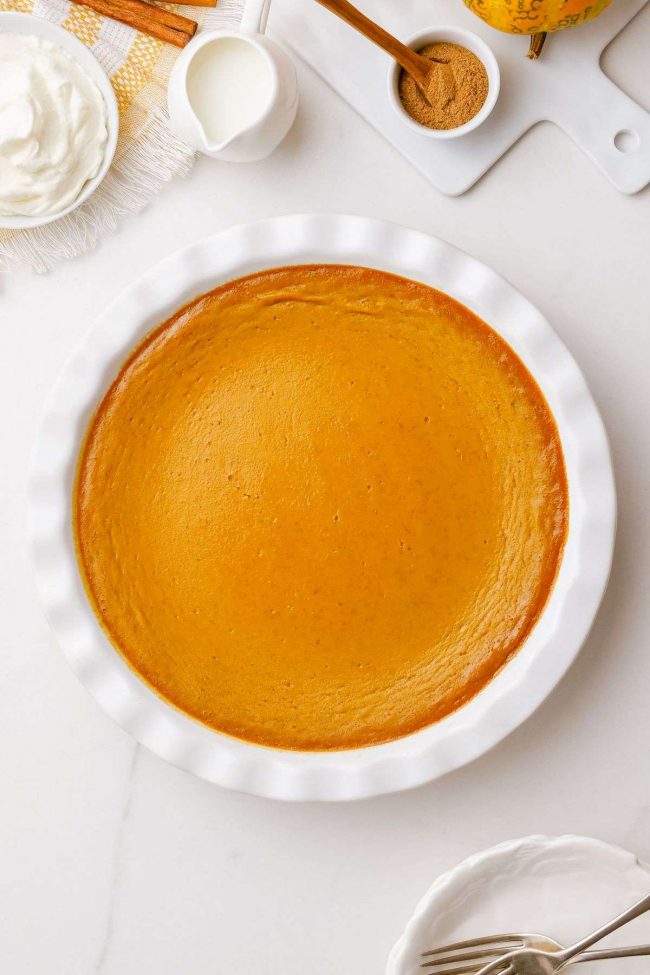 Surprisingly, yes! Let it cool completely and then wrap the whole pie (including the pan) in plastic wrap. Also, make sure your pie pan is freezer-safe.

As far as I know, they all are, but I thought I’d warn you in case there are some that aren’t meant to be frozen. Then place the wrapped pie in a ziploc bag.

You can freeze it for up to 3 months. Let it defrost overnight in the fridge before slicing. 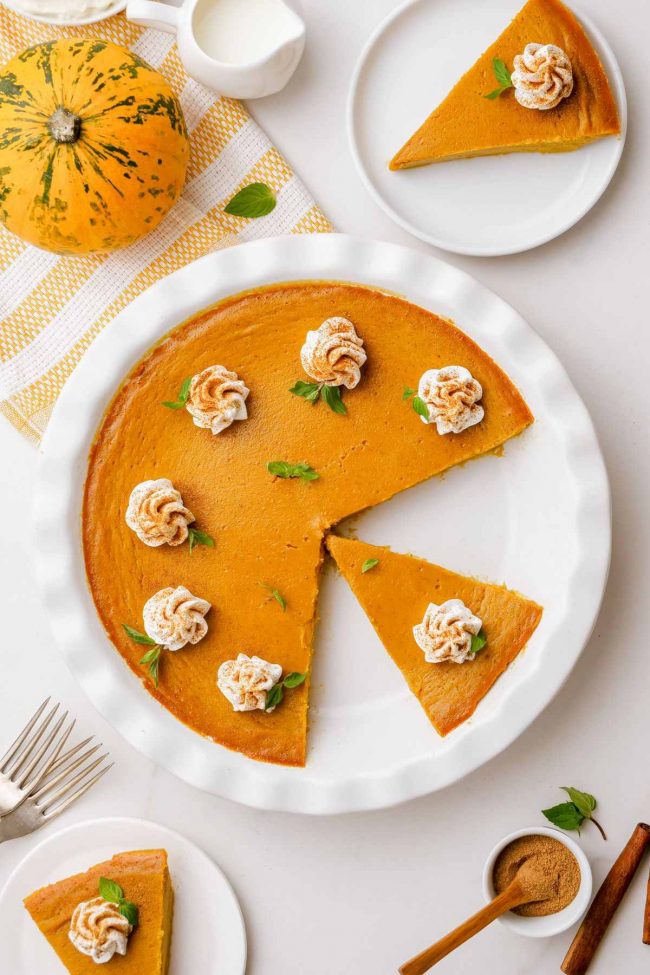 I used 1 cup of Lakanto Golden Monkfruit Sweetener in place of the granulated sugar + brown sugars. It worked great!

But I have to say – the batter with Lakanto tasted terrible. Like, I almost threw it away.

So don’t panic if you try it. Just bake, let it cool completely, chill and then taste it.

I usually use the same keto sweetener blend in all my keto recipes. It’s a Gentle Sweet TRM copycat.

If you want to use that, I recommend using 2/3 cup (128 grams) in place of the two sugars. You can find the recipe for it in my Keto Pumpkin Cheesecake Recipe, which is by the way, my very favorite keto recipe!

Please read the notes at the end of today’s recipe for the keto option. It was difficult to read with the regular, paleo and keto options in the same recipe card, so I moved the paleo + keto options to the bottom. 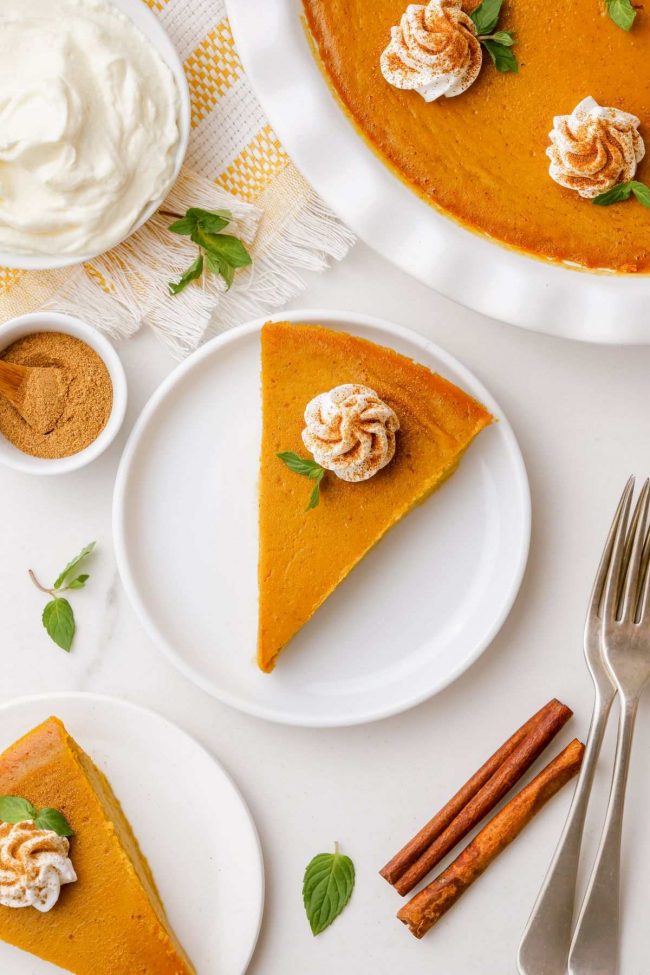 In place of the whipping cream, just use full-fat canned coconut milk. You can’t taste the coconut through all the pumpkin pie spice.

Also, I read that you can make homemade heavy cream using milk and butter. So I tried that, even though this recipe calls for whipping cream.

I actually tried it using coconut oil + cashew milk (instead of butter + dairy milk), but it curdled a bit while the pie baked. It was rather unappetizing.

I don’t recommend trying this pie with almond milk, cashew milk or anything else. It’s simply too thin. You could use it in this healthy Pumpkin Smoothie, though!

And a paleo option

Make it dairy-free as I suggested above and also use coconut sugar in place of all the granulated + brown sugar in the recipe.

And like I said above for the keto option, please read the notes at the end of the recipe to see the paleo option.

If you love paleo pumpkin desserts, also be sure to check out my Paleo Pumpkin Cake, which has a super creamy and dreamy maple cream frosting.

Can I make this vegan?

I haven’t tried it, but I would recommend just finding an already vegan crustless pumpkin pie. Eggs are important to the structure of this pie, and I’m not hopeful that eggs subs would work.

Or you could try this amazing Vegan Pumpkin Cheesecake. It’s in my top 5 favorite recipes! You can make it ahead of time, freeze it and thaw.

The same is true of this Paleo Vegan Pumpkin Pie. I prefer that cashew-based filling over a traditional one, any day. 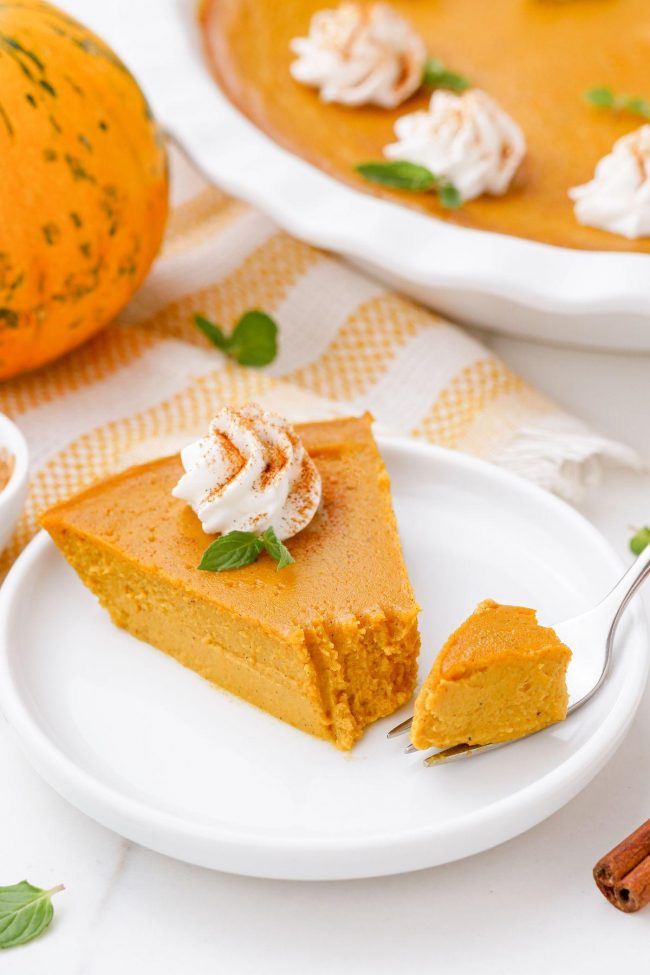 Why’s it baked at such a low temperature?

I found that baking it at a normal pie baking temperature resulted in a weird texture. It got kind of clumpy.

Can I bake this in a whatever-type-of-pan?

The problem with that is that you’d have to experiment with the baking time. And baking it for just the right amount of time is super important for this recipe. If you over bake it, it’ll be eggy.

I think I made 11 of these pies over the last month to get it perfect. I’m sick of pumpkin pie. 😂

My point is that you’ll probably want to just follow directions and make two pies for the perfect result.

That’s it! If you try Crustless Pumpkin Pie, I so want to hear about it! Leave a comment or snap a pic and tag #texanerin, so I can be sure to see it!

Please read the notes for the keto/paleo options!

Like what you see and want more?
Join over 12,400 readers and sweeten up
your inbox with new posts for free!
Your information will not be shared with or sold to a third party.
This subscription is free of charge and can be canceled at any time.
Posted by Erin in: Dairy-free, Desserts, Fall Recipes, Gluten-free, Gluten-free Desserts, Gluten-free Pie Recipes, Grain-free, Holiday Recipes, Keto, Keto Desserts, Paleo, Pies and Tarts, Seasonal Recipes, Special Diets, Thanksgiving Recipes
Pin post on Pinterest Share post on Facebook Share post on Twitter Share post on Google+