Home » Recipes » Roundups » Most Popular (and My Favorite) Recipes Of 2016

Most Popular (and My Favorite) Recipes of 2016

I was so excited to post that pecan-crusted salmon the other day that I forgot to post this roundup. It’s really good fish. ;)

I haven’t done one of these Best Of roundups since 2011 but when I was going through my recipe archive recently, I felt compelled to do one. So many great recipes last year! 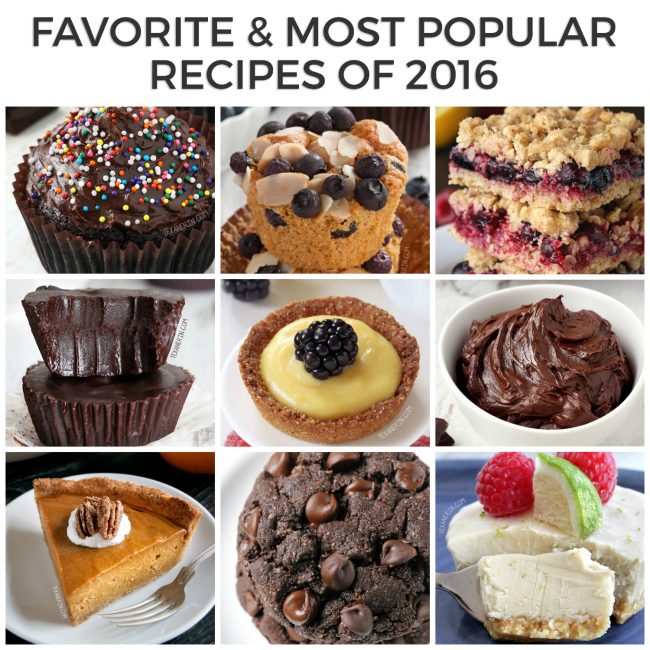 Below are my most popular recipes published in 2016. 9/10 are gluten-free, 8/10 are paleo and only one is whole wheat! Where are all the whole grain lovers?! I know there are at least 4 of you (totally serious here!) that are here for the whole wheat recipes. I realize I’ve been posting more paleo and fewer whole grain recipes but I’m hoping someone’s still interested in them.

And below that are my personal favorite recipes, in case you feel like making something but don’t know what. You’ll also find my least popular recipe at the end of the post!

These Gluten-free Oatmeal Cookies are the same as my 100% Whole Grain Chewy Oatmeal Raisin Cookies… but without the gluten. :) I actually prefer the gluten-free version. They’re somehow even chewier!

This Healthy Vegan Peanut Butter Chocolate Fudge can also be made paleo if you use a different type of nut butter. It’s good stuff! The only annoying thing is that it melts at room temp.

These Paleo Mini Lemon Tarts are bright and cheery and they make me happy. :D Especially post-Christmas!

My one non-gluten-free recipe that made the Top 10! These Berry Bars are lemony and so full of berry goodness.

These Paleo Apple Muffins have grated and diced apples in them and are loaded with cinnamon. They’re my favorite muffin recipe – right after the blueberry muffins below!

So this isn’t actually a recipe but a roundup. There’s something for everyone in this roundup of 75 Paleo Cookie Recipes You Can’t Resist!

People seem to love the texture of these Paleo Chocolate Cupcakes! It’s unique but delicious.

This Paleo Vegan Chocolate Fudge Frosting is ridiculously easy and hard to mess up. It holds its shape at room temperature and doesn’t taste like avocados or coconut (all of which are often issues with paleo frostings) so I can see why this was a hit!

The Recipes I’m Most Excited About

This Paleo Vegan Pumpkin Pie has a suuuper creamy filling that I actually like more than regular pumpkin pie filling. And it doesn’t use coconut milk (just saying for the people sick of coconut milk-based stuff!).

People agree with me – the filling in these Paleo Vegan No-bake Key Lime Pies tastes just like regular key lime pie! You HAVE to try these. :)

I think these Paleo Blueberry Muffins are my favorite recipe ever. Or at least in the Top 5. The texture is similar to angel food cake and the almond extract in them… oh, man. You have to make these, too. ;)

These Chocolate Cupcakes, just like the Pumpkin Cupcakes below, can be made with whole wheat or gluten-free flour. They’re just as delicious as my other favorites but they were adapted recipes, meaning I didn’t have to make them 20 times before being totally happy with them. So I’m not quite as excited about them just because I didn’t have that feeling of victory over them. ;)

Both are also recipes I posted in 2011 and then reposted last year because the pictures were terrible and nobody ever looked at them. They needed to be seen again. :D

The Least Popular Recipe (Ever!)

Even the recipes I posted in my first months of blogging had more pageviews than these Paleo Vegan Orange Cookies. I even made a video for them, thinking they’d be a hit! Don’t y’all like orange cookies?! I really don’t understand why these bombed so hard, especially considering they’re just like my lemon cookies, the most popular post of the year, but with orange flavor!

Did you make any of my recipes last year? What do you want to see more of this year? I’m taking requests! :)