This vegan peanut butter fudge calls for just four ingredients and only takes a few minutes to make. It’s naturally gluten-free, grain-free, and dairy-free and has a paleo option. It can also be made with butter. It’s sweetened with maple syrup, which gives it a slightly caramel-like texture!

I originally posted this recipe a few years ago but know that some people were hesitant to make it, a little unsure about the “boil for 2 minutes step.” 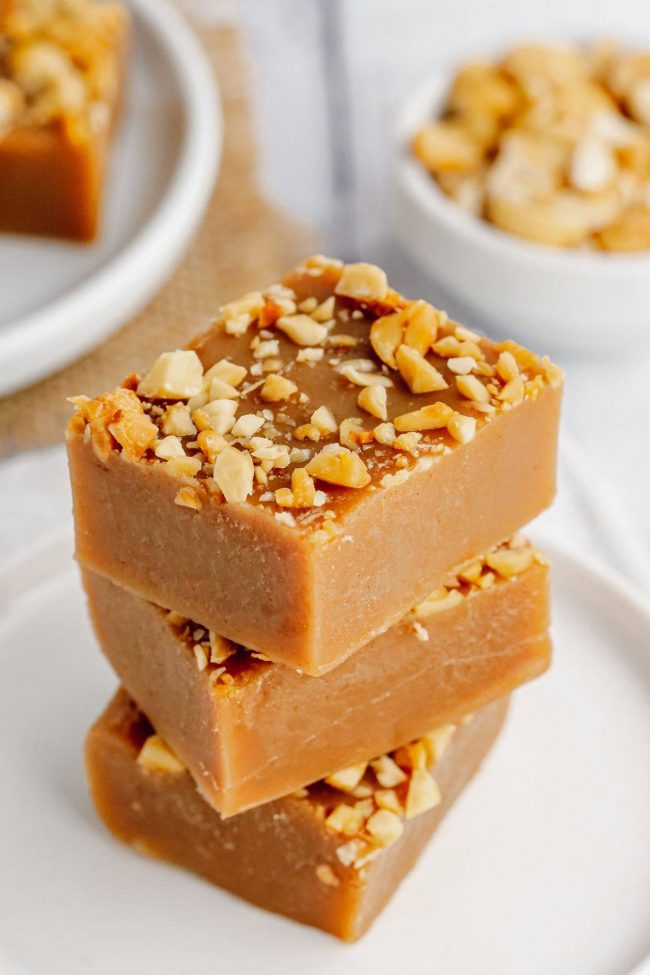 So I made a video to show you just how easy it is! No candy thermometer is needed – you really just bring it to a boil and stir for 2 minutes. So easy!

If you’re still unsure about making it, check out the reviews below!

I’m calling this vegan peanut butter fudge but it’s almost like a cross between caramel and fudge. You’ve either got to have some self-control or have a buddy around when making this fudge. Safety in numbers!

All that’s needed is natural peanut butter – the kind with just peanuts and salt – maple syrup, coconut oil (or butter if you can eat dairy) and vanilla.

If you’re vegan, definitely check out my post on Is Maple Syrup Vegan? Some manufacturers use an animal product during production (that’s not required to be listed on the bottle) that you may or not be okay with.

And as far as fudge goes, I think this is pretty darned healthy. Like the chocolate almond butter recipe I just posted, it has quite a bit of maple syrup.

But I’ll take that over a typical peanut butter fudge recipe with the regular, junky (but delicious!) peanut butter and powdered sugar. 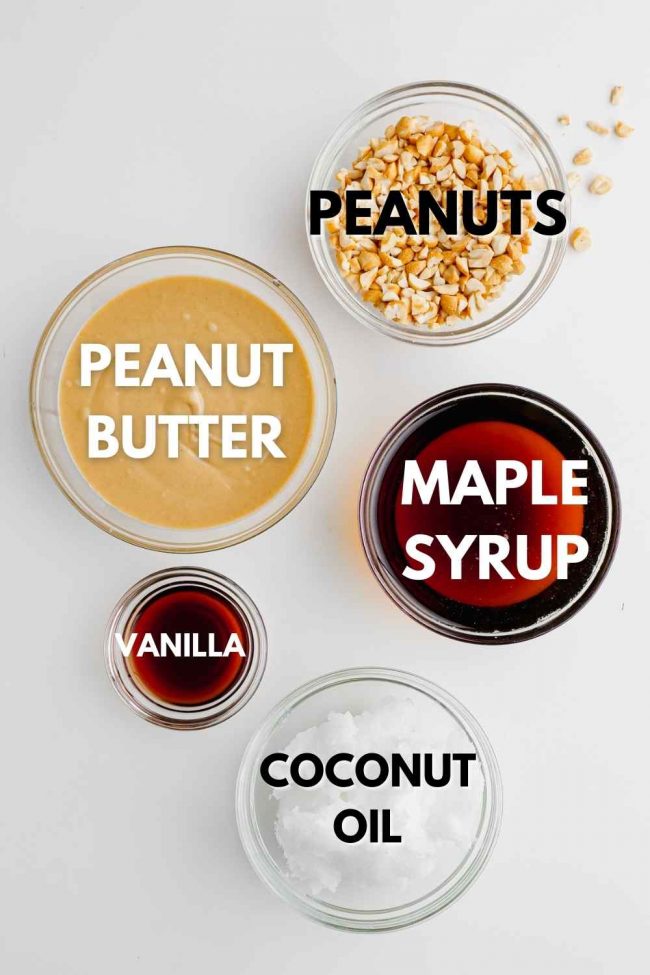 Using honey instead of maple syrup?

If you’re wondering if honey will work, I don’t recommend it. One commenter used honey with success but made some other changes to the recipe. You can read her comment here.

I don’t recommend honey because the texture is totally different and the fudge tastes way too much of honey. It also took a lot longer to boil to get to the right consistency.

It seems as if when you need to boil the maple syrup, then honey is not a direct sub. And the result is usually less balanced than the maple syrup version. 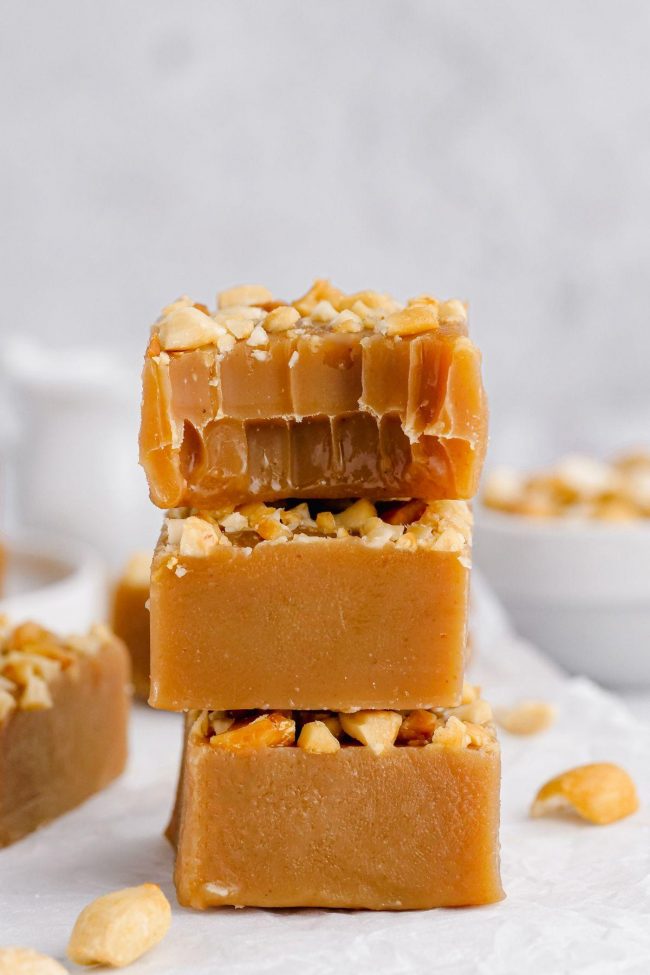 What kind of fat to use

I’ve tried this fudge recipe with unrefined coconut oil, and while it doesn’t taste coconut-y, the coconut flavor detracts just a bit from the maple peanut butter taste just a bit.

When you use refined coconut oil, which doesn’t have any coconut flavor, the maple and peanut butter flavors just stand out even more. Both versions are great, though!

If you don’t need this peanut butter fudge to be vegan and you can eat dairy, you can use regular butter. If vegan butter works, I have no idea as I’ve never used it. 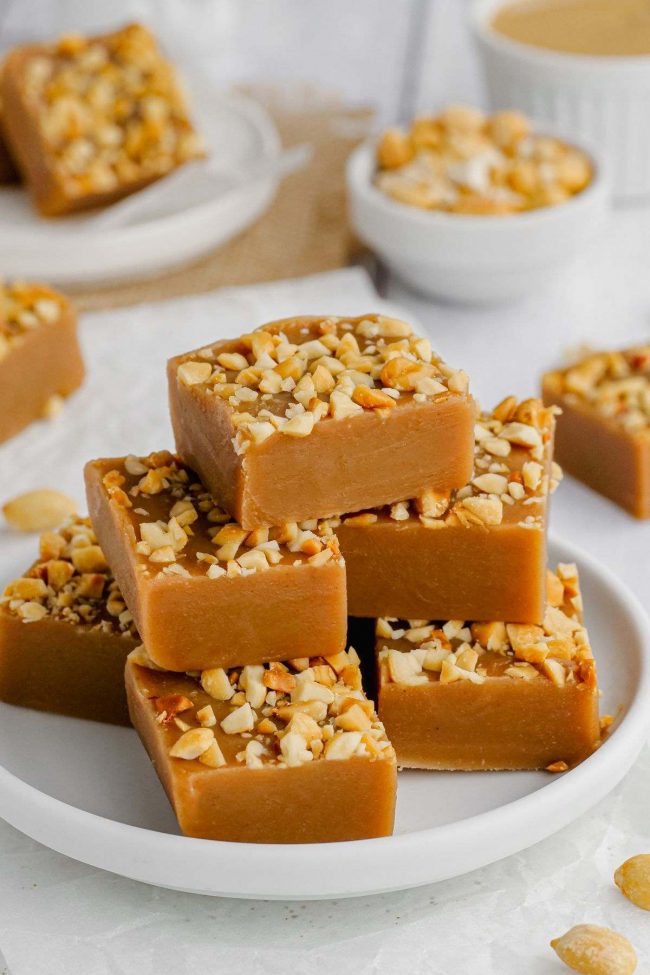 What kind of pan to use

After you boil the fudge, you pour it into a parchment-lined container and freeze it. You can also use a mini muffin pan.

My fudge isn’t setting in the freezer!

Did you make any changes at all to the recipe? Sometimes people say they followed a recipe to a tee but then it turns out that they used sugar-free “maple syrup.”

This is a gigantic change. You really need to follow the recipe for it to turn out properly.

Did you let it boil for the full 2 minutes until it had thickened a bit? It won’t set if you don’t boil it long enough.

Or did you boil it too long? If you do that, then it might separate. I’ve had this happen a few times.

At first, it seems hopeless but after vigorously mixing, I could get the oil reincorporated. But it’s much easier to just not let it boil too long. Set a timer and don’t leave it!

You just added a bunch of oil to the recipe that shouldn’t have been there. You need to stir your peanut butter every time you use it. And don’t pour out the oil before stirring the peanut butter in the jar!

Conversely, if you opened a new jar of peanut butter and poured out the layer of oil at the top, then your peanut butter doesn’t have the right amount of fat in it. And neither will the recipe.

That could result in your fudge being a bit difficult to chew.

This vegan peanut butter fudge isn’t totally firm when refrigerated, which is why I keep mine in the freezer. I also froze it as a self-preservation tactic.

It didn’t work. If you find this fudge as addictive as I do, it’s hopeless. It’s easy to halve the recipe and if you use grams instead of measuring cups, it’s easy to make a fourth or an eighth.

An eighth will give you three pieces and you can just go to town on them and then not feel bad. ;) If you do that or make just half, you need to reduce the cooking time. You’ll know it’s ready once it thickens a little and looks glossy. 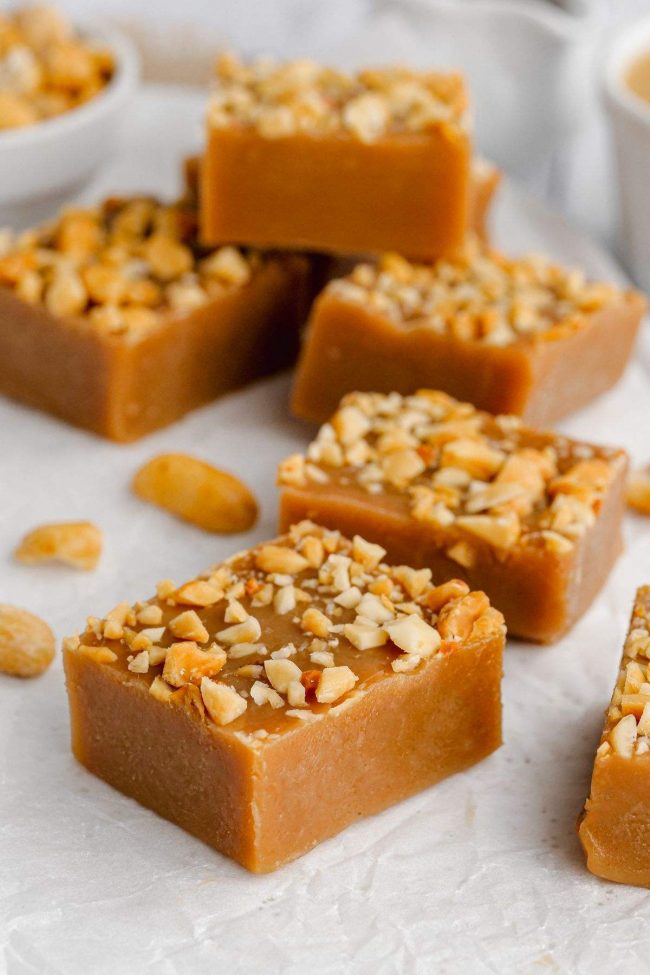 I’ve also tested a paleo option. Just use cashew butter. The result is super delicious and maple + cashews really go so well together.

It takes longer to boil and half the time, it doesn’t set properly. So only use that if you’re willing to experiment. What’s better is to use a mix of sunflower seed butter + cashew butter.

When you do a 50 / 50 mix of the two, it has the same consistency as peanut butter AND it tastes closer to peanut butter than just plain sunflower seed butter.

Both work just fine in this recipe! I like using homemade peanut butter because I know it’ll always taste good and it’s cheaper.

I don’t think this is a problem in the US, but in Germany (and I’m guessing some other countries around the world), there is some really nasty natural peanut butter out there.

The peanuts are supposedly roasted and the only other ingredient is salt but it tastes terrible. I don’t know how they manage to screw up peanut butter.

So if you want to make your own you don’t have natural peanut butter on hand, here’s how to make peanut butter. You just need roasted peanuts and a food processor or high-speed blender! 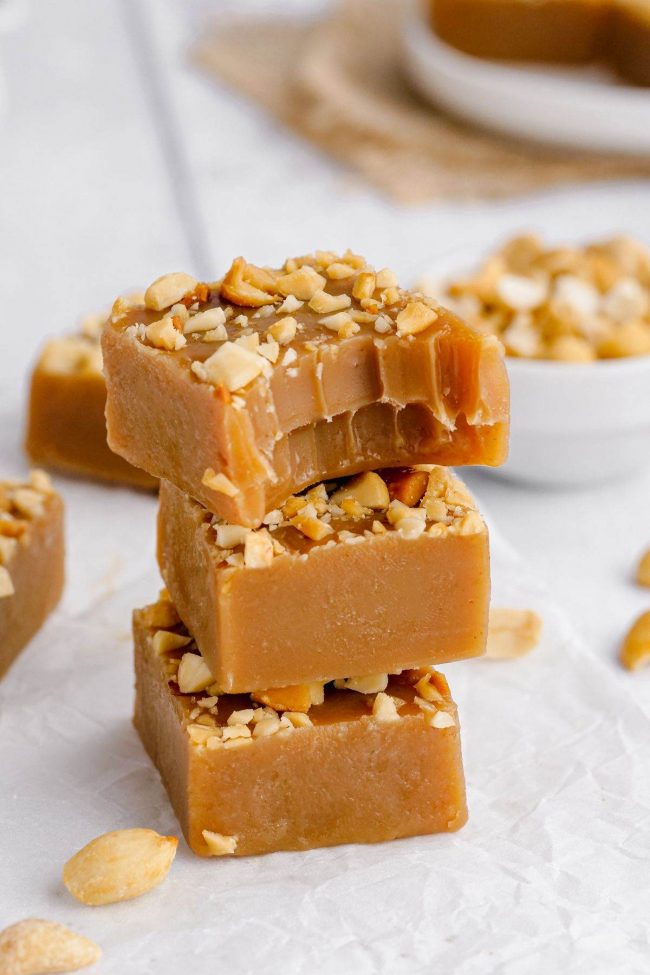 I’ve got lots of options for you! They’re all vegan and paleo or have a paleo option.

Please let me know if you try this fudge out! I’d love to hear how you liked it. 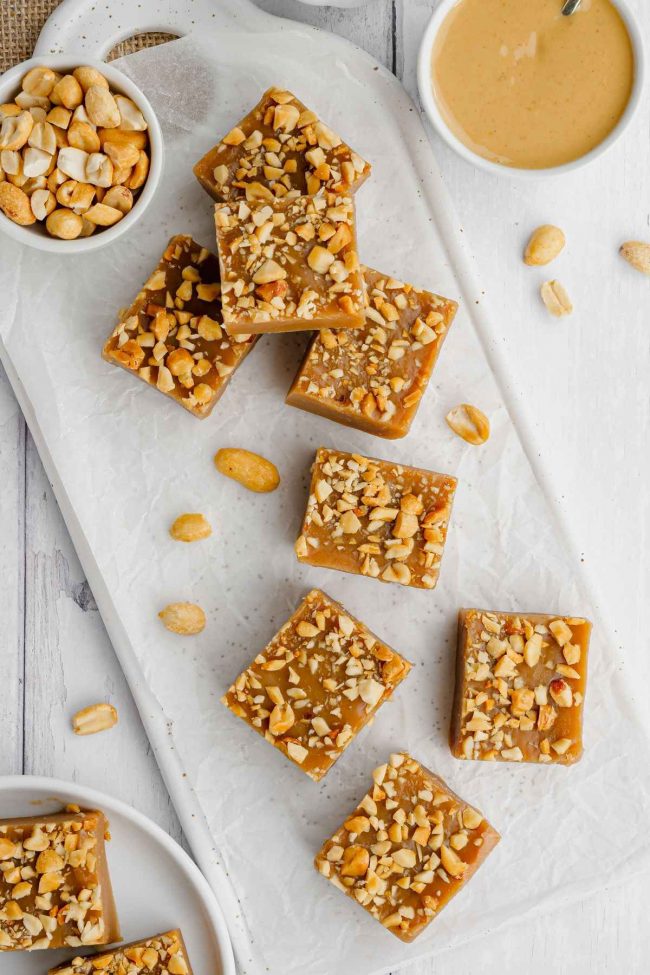 Questions about this peanut butter fudge? 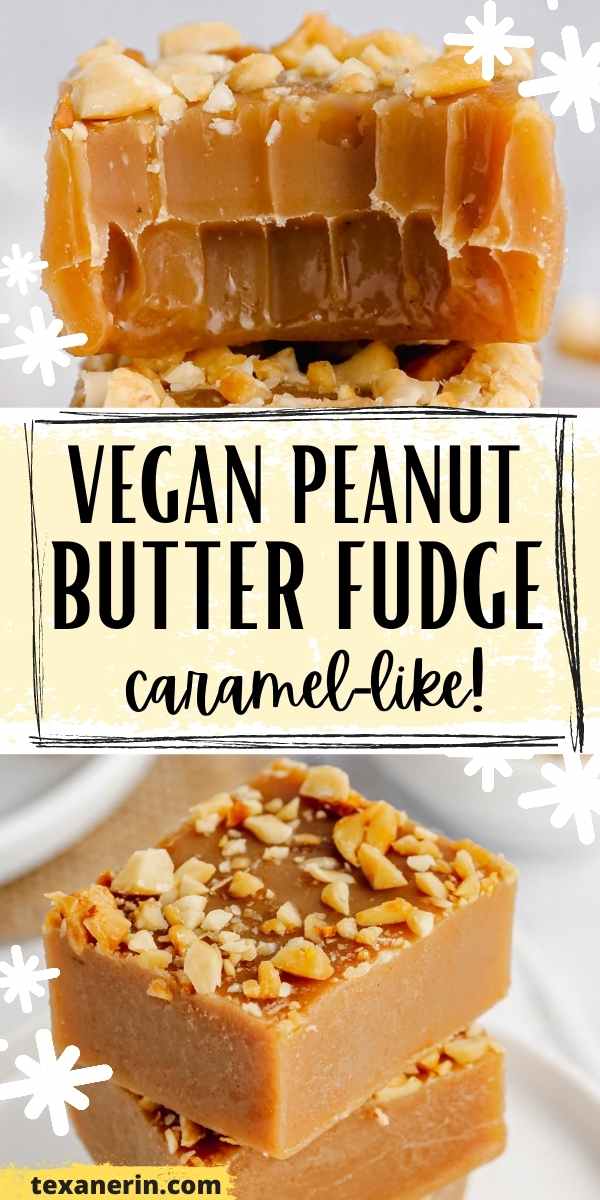